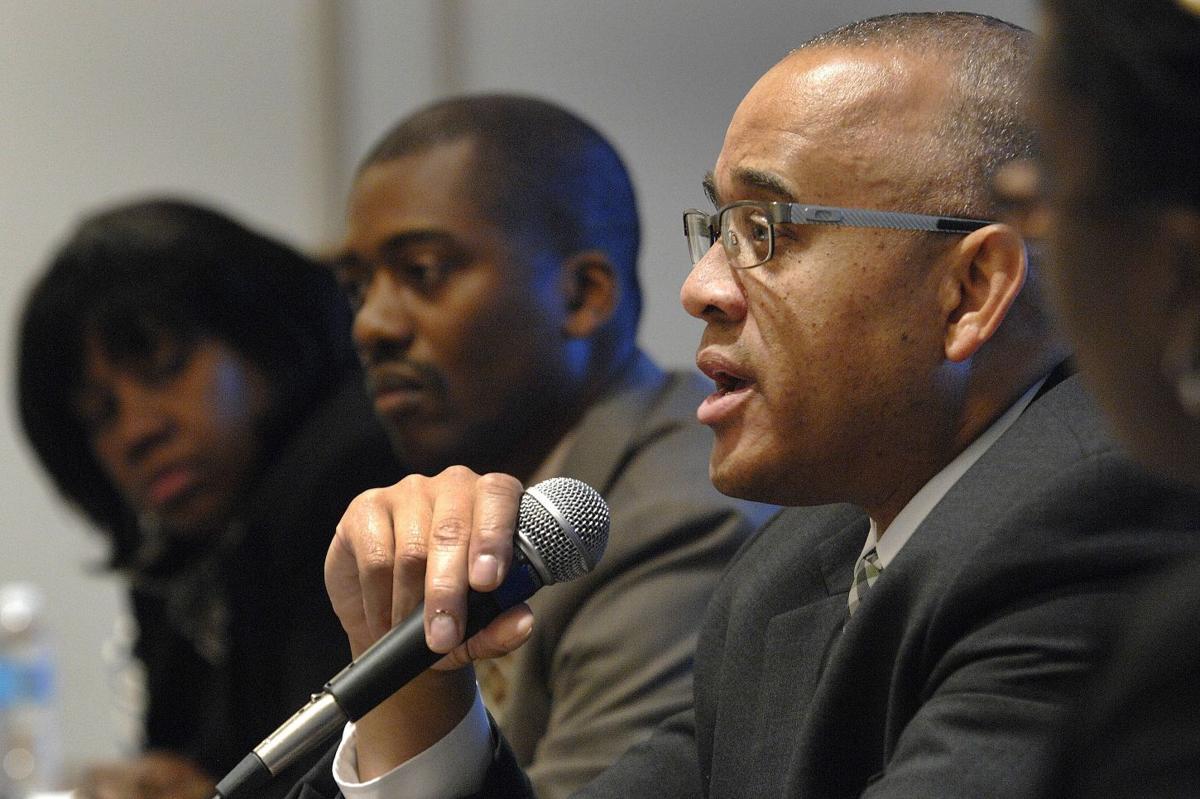 Bloomington Police Chief Brenden Heffner answers questions about relations with police as he spoke on a panel titled "The Talk" on Sunday in the Prairie Room at Illinois State University. Priscilla Jones, a retired Peoria police sergeant, left, and Vernon Smith, an Illinois State Police field manager, center, listened to his response. 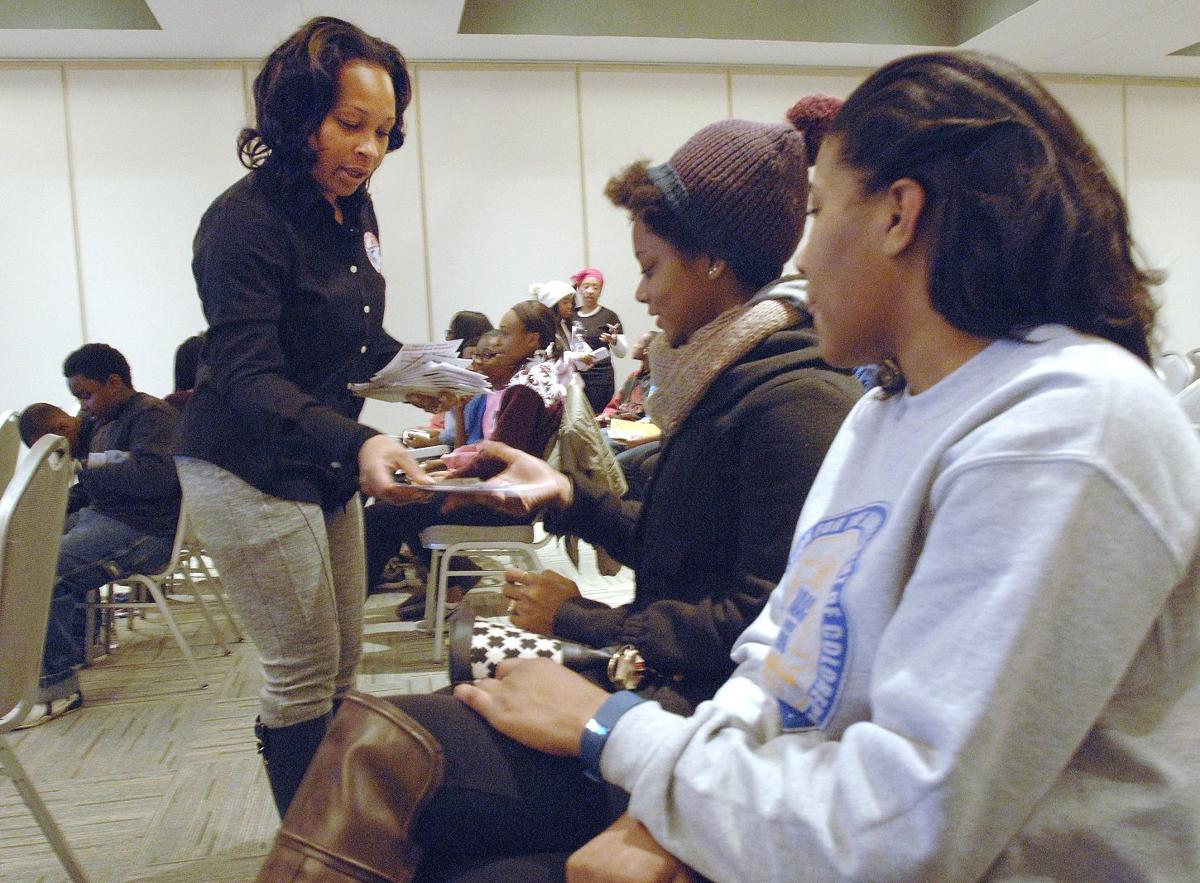 Tiffinie Pryor, a pre-teen sponsor for the Bloomington chapter of Jack and Jill of America Inc., left, hands out literature about how to behave during a traffic stop to Illinois State University students Gabby Bozman and Nicole Jones on Sunday in the Prairie Room. 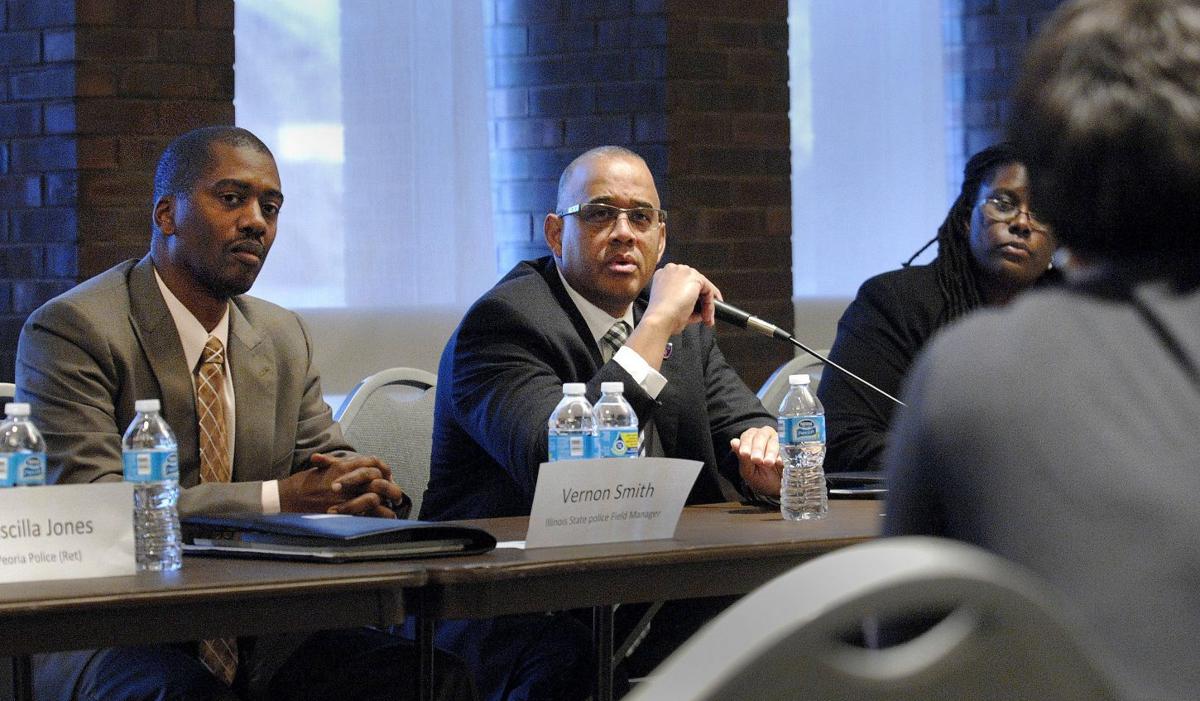 NORMAL — Illinois State University student Dominque Tice-Carr said she was just minding her own business, driving to church, one night when police pulled her over in Normal.

“I was just leaving my house and I had a blinker that was out,” she said Sunday during a two-hour panel discussion on race relations and law enforcement at Illinois State University's Bone Student Center in Normal. “They called in four additional officers to assist with the stop.

"My question is how do I feel comfortable in a situation like that?”

Tice-Carr said she was cooperative and respectful, didn’t have any outstanding arrest warrants and was by herself. As a result, she didn’t understand why more officers were needed for such a minor infraction.

Her car was searched and she was eventually allowed to leave.

Bloomington Police Chief Brendan Heffner’s officers didn’t respond to the call, but he said it is common for other officers to be brought in to assist with the search of a vehicle.

“If they search a car, they are probably going to have you off to the side so an officer can watch you and then have two officers search the car,” he said. “Sometimes when there are other officers in the area, they are going to come by for backup just for that officer.

"It’s more of a safety issue for the officers more than anything else.”

About 90 people attended “The Talk,” a program sponsored by the Bloomington-Normal Jack and Jill Inc. and ISU NAACP chapter. Jack and Jill of America is an organization of mothers with children ages 2 to 19 that is dedicated to nurturing future African-American leaders.

“With recent and repeatable cases where young people have lost their lives at the hands of law enforcement, especially people of color, we believe it is important to bring our community together to address concerns and exchange information on how to respond in challenging situations,” said Jack and Jill member Leslie Clay, one of the organizers of the event.

“We are fortunate to not have such cases in our community and we want to prevent them as much as possible," she added. "Most importantly, we would like our youth to walk away with key points and behaviors that they can utilize when dealing with law enforcement officials.”

Jones said that while racial profiling does exist, not every department and not every officer does it.

“First, if you get stopped and start up with an attitude, then you are starting off on the wrong foot,” she said. “If you are respectful and not doing anything wrong, there won’t be any problems.”

Smith said that if someone is having problems with the police, there may be legitimate reasons.

“You should be eliminating contact with the police and if you are doing the right things, remaining respectful and not causing trouble, then you probably won’t have much interaction with the police,” he said.

“We all have to be accountable, as police officers, as parents, or as citizens,” he said. “If your child is in a traffic stop at 2 or 3 in the morning in a bad neighborhood, you may want to do some checking and find out what is really going on.

"Most times, our goal is to stop crime before it happens," he added. "But when things aren’t adding up, we want to be know what is going on.”

A Bloomington man, who is an orthopedic surgeon, was arrested Wednesday as a result of a sexual assault and sexual abuse investigation.

UPDATED Weather cancellations: Here's what you need to know 1/17/20

Cancelling your event because of expected sleet and snow? Drop us a note at newsroom@pantagraph.com and we'll share the word.

BLOOMINGTON — Unless you're Olaf, the weekend forecast just gets more and more yucky.

LSC Communications, Inc. has announced it plans to close its manufacturing facility along north U.S. Route 45 in Mattoon by July.

Olympia's next superintendent was approved Tuesday to succeed Andrew Wise.

Another weekend of yuck: Snow, rain are on the way to Central Illinois. Here's what to expect.

Another weekend of 'yuck' is on the way, with snow and rain in the forecast again for the end of the week.

Flick Fact: Who was that famous guy in Minonk?

Question: Can you name the man who later would become known worldwide but in 1948 appeared one Saturday night in Minonk, and after a half-hour…

Bloomington Police Chief Brenden Heffner answers questions about relations with police as he spoke on a panel titled "The Talk" on Sunday in the Prairie Room at Illinois State University. Priscilla Jones, a retired Peoria police sergeant, left, and Vernon Smith, an Illinois State Police field manager, center, listened to his response.

Tiffinie Pryor, a pre-teen sponsor for the Bloomington chapter of Jack and Jill of America Inc., left, hands out literature about how to behave during a traffic stop to Illinois State University students Gabby Bozman and Nicole Jones on Sunday in the Prairie Room.