NORMAL — The Normal Fire Department responded at 1:25 p.m. Saturday to a fire on the third floor of the Sugar Creek Apartments, 606 S. Linden St., Normal.

No injuries were reported, but 12 apartment units were involved in the fire, and a broken fire hydrant and a subzero wind chill factor complicated the firefighting efforts.

Normal was assisted by fire departments in Hudson, Carlock and Bloomington, with about 40 firefighters working the scene at 3 p.m. Saturday. At 4 p.m., the aerial trucks stopped pouring water from above and firefighters began pulling siding away from the building.

Icicles began forming along the edge of the roof shortly after firefighters stopped the flow of water. The roof of the center section of the building appeared to be gone, but firewalls prevented the flames from spreading to the sections on the east and west, said NFD spokesman Matt Swaney.

Swaney said the origin and cause of the fire were not yet known. Once firefighters could knock out "hot spots" inside the building, the investigation work would begin Saturday night, he said.

When fires occur during freezing cold, he added, "it's a race against time" to gather equipment filled with water before it freezes.

Firefighters were seen using rubber mallets to break ice off of ladders.

Nathan Trice, a resident of the apartment building, recalled smelling a "campfirey smell" before the fire was discovered. He and his roommate were able to grab some valuables before leaving the building. Their unit is on the far end of the building and not directly affected by the fire.

Still, he said, "By the time we got out the whole roof was on fire."

Trice's roommate, Alexander Neff, had been sleeping when he heard Trice get up.

"I didn't smell anything, but then I heard the sirens," Neff said.

Marisa Hortonmeza lives in an apartment on the side that was protected by the firewall.

"It was scary," she said of the speed at which the fire grew.

"Then we got out and the whole roof was on fire," he said. Fletcher lives on the east side of the building, where the fire did not spread.

The Sugar Creek Apartments house primarily students. Illinois State University President Larry Dietz arrived on the scene shortly after 3:30 p.m. and talked to some of the students. A representative of the Dean of Students Office also was on the scene asking students what assistance they might need.

ISU sent buses to provide shelter to students displaced by the fire, and the ISU Police Department said they have been in contact with the apartment management company.

Watch now: Sound of Normal train derailment: ‘You knew something was wrong’

"The University will work with affected students to ensure they have food and lodging," according to a statement on the ISU Police Department's Facebook page. "The Red Cross will assist as needed. Impacted students can email the Dean of Students Office at deanofstudents@ilstu.edu for information about housing, food, clothing, student absences, etc. Staff are monitoring this email address."

Dietz expressed thankfulness that everyone got out and that no one was injured.

"It could have been a lot worse," he said.

Due to the extreme cold forecast for Sunday, all Illinois Department of Public Health-supported COVID testing sites will be closed. This includes the site at the McLean County Fair Grounds on Bloomington’s west side. The site will reopen Monday morning unless directed differently by the state.

Lee Enterprises' reporters give brief overviews of newsworthy stories by journalists at The Pantagraph, the Herald & Review and the Journal-Gazette/Times Courier. Subscribe to Long Story Short for free at Apple Podcasts/iTunes and Spotify.

Investigators are still searching for a cause to Saturday’s morning train derailment in uptown Normal, which damaged at least 16 cargo cars on a Union Pacific train. Cleanup and repair on the track will continue this week, but one of the two lines is now open and trains have been moving through town.

Cause of Normal apartment fire still under investigation

The fire destroyed or heavily damaged 12 apartments during a busy weekend for firefighters in which they also handled a massive train derailment in uptown Normal, and handled a Sunday morning fire related to that.

Some residents in Normal have noticed a strange coloring in the water of Sugar Creek, but officials say there is no risk. "The material has been identified as non-toxic water-soluble paint that was in one of the (train) trailers that was involved in the fire,” officials said.

Crews on Monday remained on the scene of a house fire that displaced at least three people.

A garage fire in a north Normal apartment complex is under investigation. 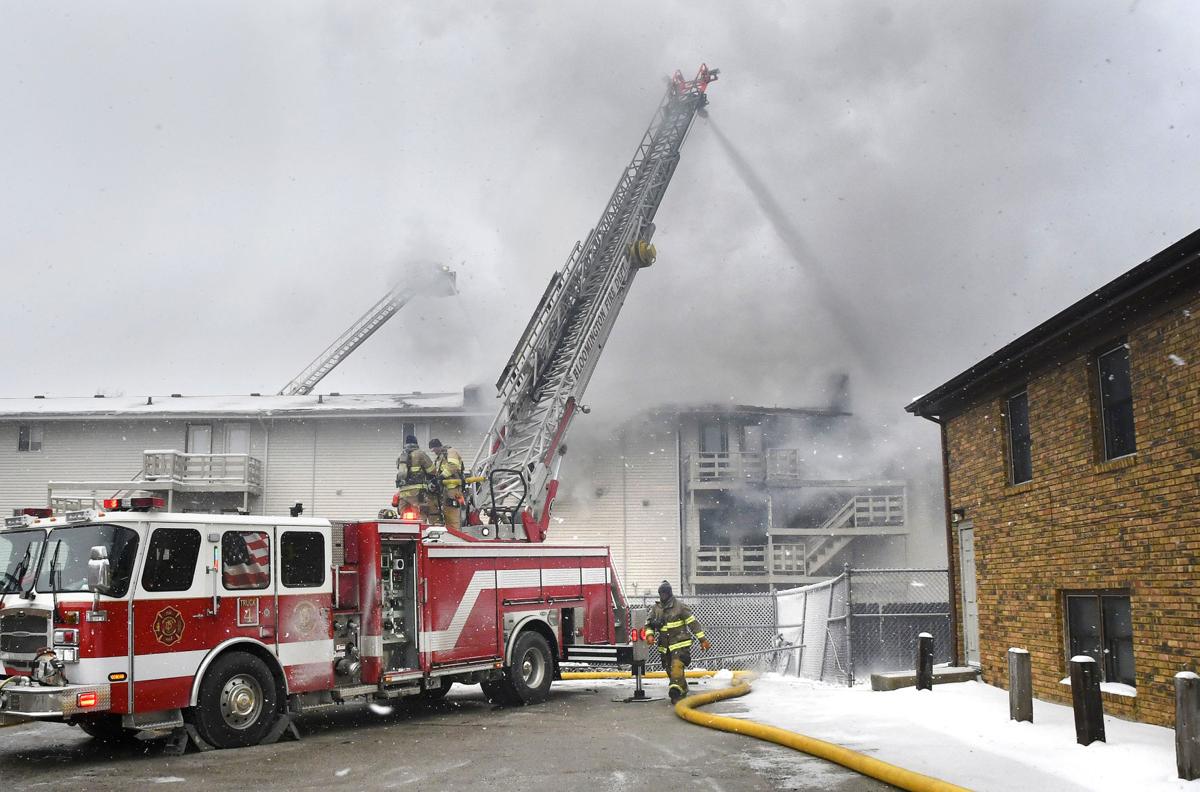 Normal and Bloomington firefighters use ladder trucks to fight a fire that damaged about a dozen apartments in the 600 block of South Linden Street in Normal Saturday afternoon. No one was injured in the fire and a cause is under investigation. 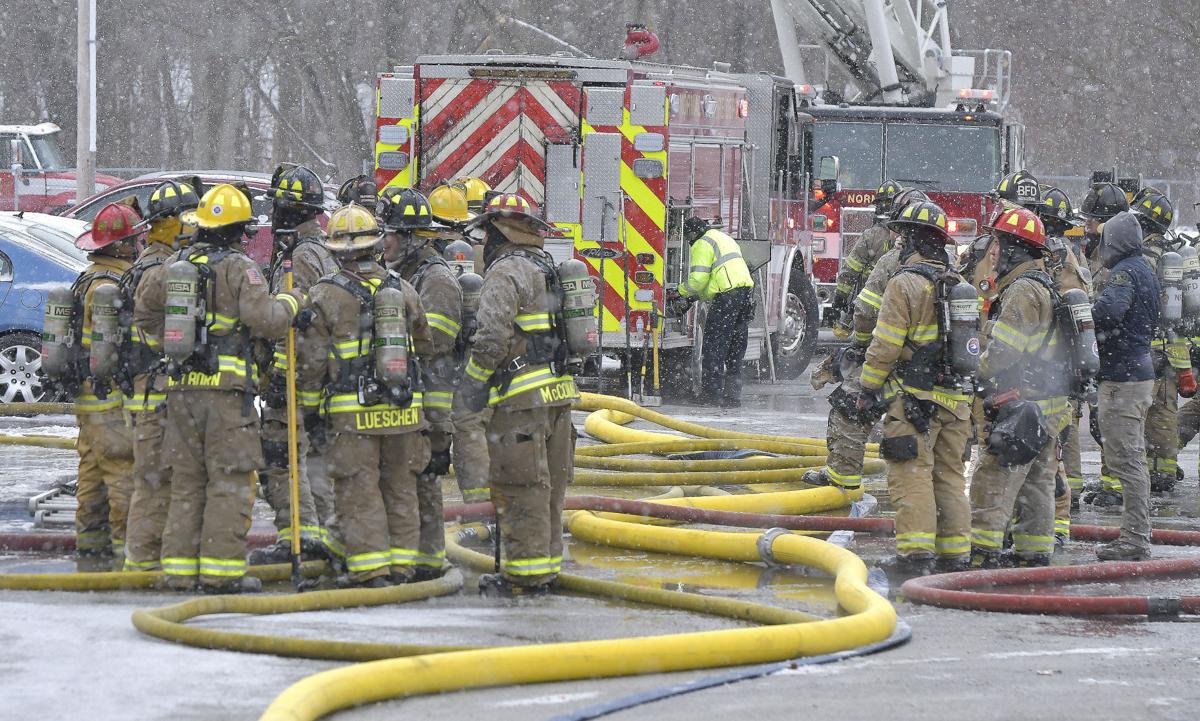 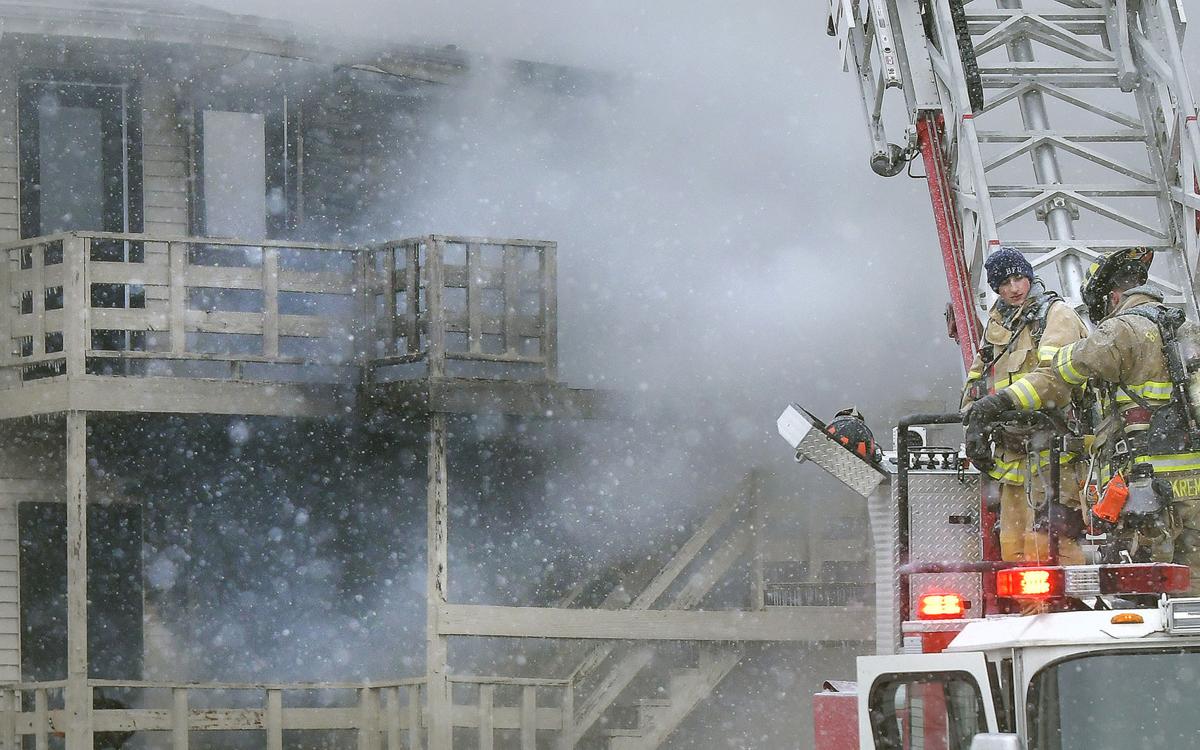 Bloomington firefighters assist Normal firefighters with a ladder truck as they fight a fire that damaged about a dozen apartments in the 600 block of South Linden Street in Normal Saturday afternoon. No one was injured in the fire and a cause is under investigation. 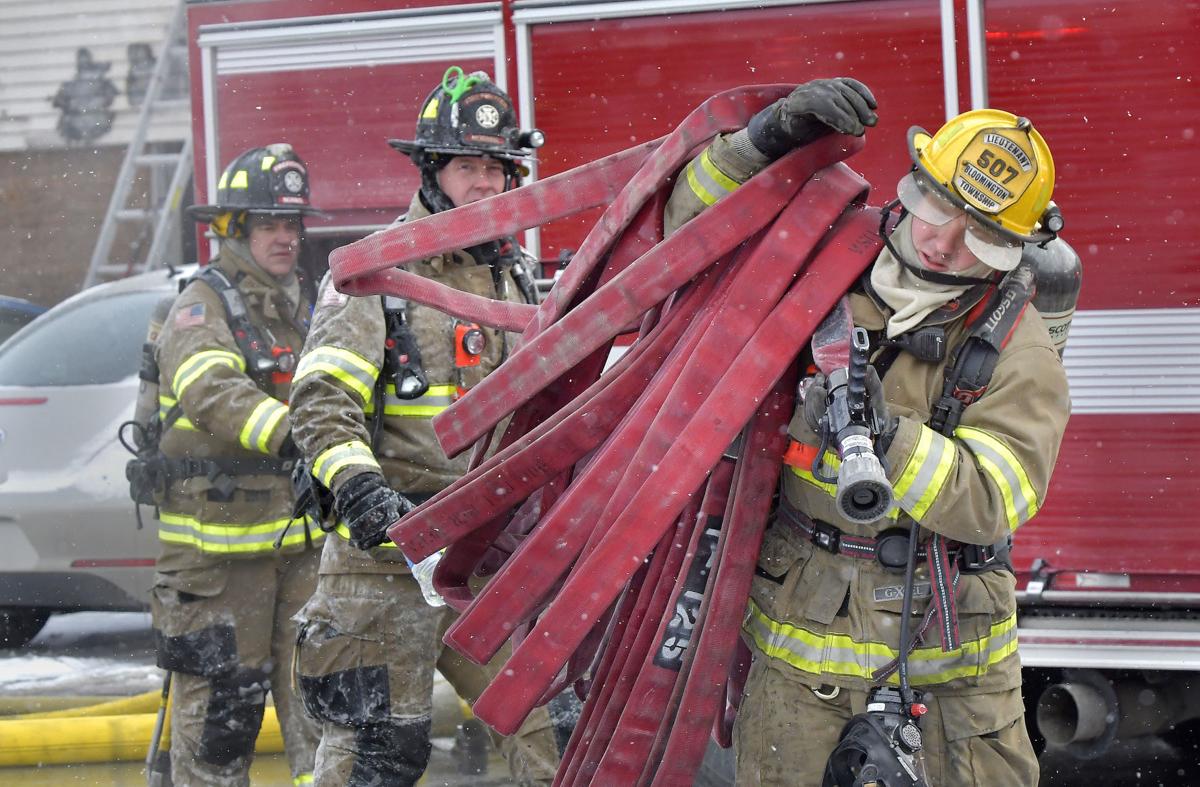 Bloomington Township firefighters set up fire hoses as they assist Normal firefighters at a blaze at student apartments in the 600 block of South Linden Street in Normal Saturday afternoon.