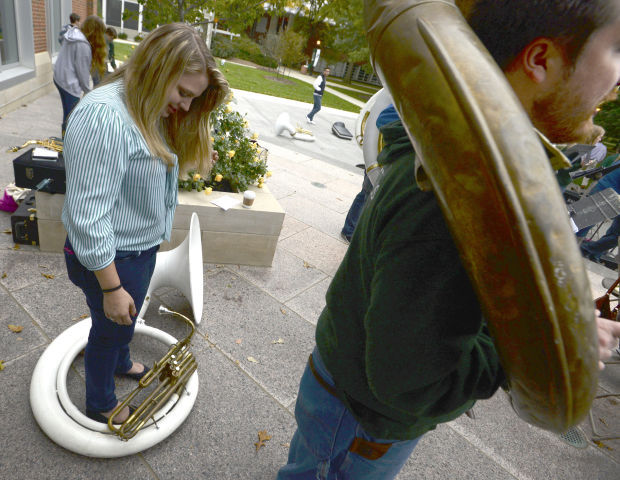 Illinois Wesleyan University alumna Lily Sikes stands inside a sousaphone prior to playing in the alumni band, outside State Farm Hall as part of the homecoming events Saturday held on the Bloomington quad. 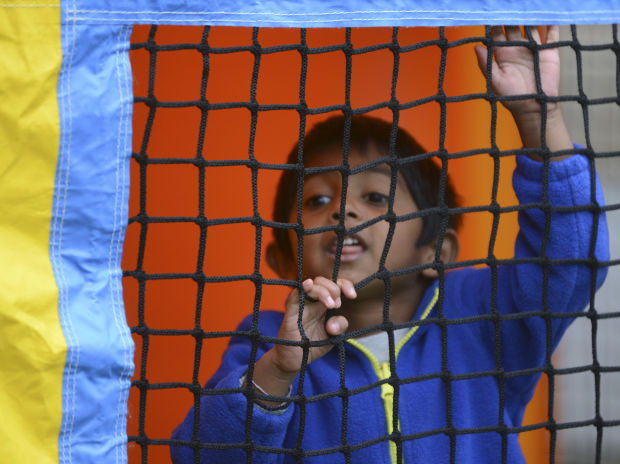 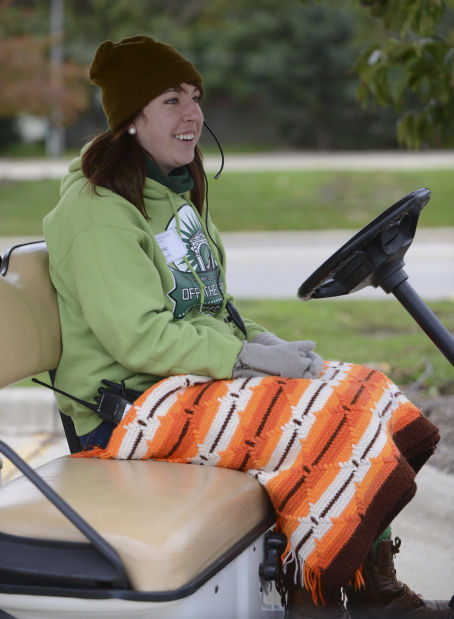 Members of Kappa Delta sorority arranged canned goods outside of Tucci Stadium, designing a music-themed arrangement to honor the 150th anniversary of the School of Music.

The food from Extrava-CAN-za will be given to Midwest Food Bank. About "a cart full," or 150 items, were donated by the sorority, said senior psychology major Brenda Wheeler, a Kappa Delta member.

The sculpture included an eighth note, treble clef and "KD (hearts) IWU," using cans of vegetables and boxes of macaroni and cheese.

It was among a number of events — including tailgating and a football game — that drew students and alumni to celebrate homecoming.

“My favorite part of homecoming is seeing my friends who come back and still have that Illinois Wesleyan spirit. They like to see that it is changing and growing,” said Wheeler, who will graduate in December. “This is really a celebration of our alumni and how much they've done for our school.”

Near the sorority project was the campus chapter of Habitat for Humanity, which promoted cow pie bingo.

The cow was a no-show, but sophomore biology major Lesly Ingram of Wadsworth milked the occasion with a cow costume and Frisbee to sell tickets.

Normally, bingo players buy a ticket for $5, then are randomly assigned a spot on a field grid. Players can win up to $200 if the animal “deposits” on their spot.

Nature didn't comply for the last two years, so the chapter got creative with the costume and threw the Frisbee onto the grid to determine a winner.

The cow costume helped sell more tickets for the fundraiser, though. Savich said the group hoped to raise about $2,000 to donate to McLean County Habitat for Humanity.

Meanwhile, about a dozen nursing graduates returned for their 35th reunion tailgate. About 35 nurses graduated that year, said nurse Maureen Birckhead of Atlanta, Ga., and formerly of Pontiac.

“We try to come every five years and take a tour of the nursing building. We stay in touch through social media, and some of us take vacations together,” said nurse Cherie Isely of Clemson, S.C., formerly of Chagrin Falls, Ohio.

“This is when all of us get together again, and 35 years later, we know there's not going to be a million more,” Birckhead said.

Sarah and Matt Bibo of Shorewood returned to IWU for their 10-year reunion. The couple met at IWU and married in 2005, a year after graduating.

“We both wanted a small school but with a lot of opportunity,” Sarah Bibo said.

“It's fun to come back and see everybody, meet peoples' families and see how the campus has changed,” she said.

Keep it Central Illinois this Halloween with these locally inspired costumes.

Illinois Wesleyan University alumna Lily Sikes stands inside a sousaphone prior to playing in the alumni band, outside State Farm Hall as part of the homecoming events Saturday held on the Bloomington quad.