Thanks to Miracle League, special kids are having a ball
0 comments
Share this
× 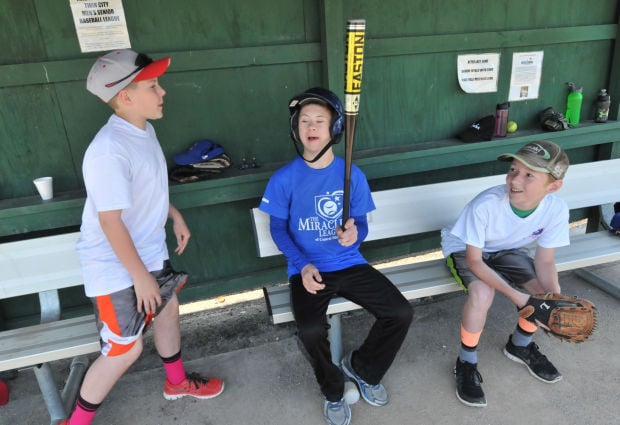 From left to right, John Munn, 12, Kurt Kinley, 13, and Chris Mercia, 12, all of Bloomington, hang out in the dugout before Kinley bats during the Miracle League opening day Sunday. 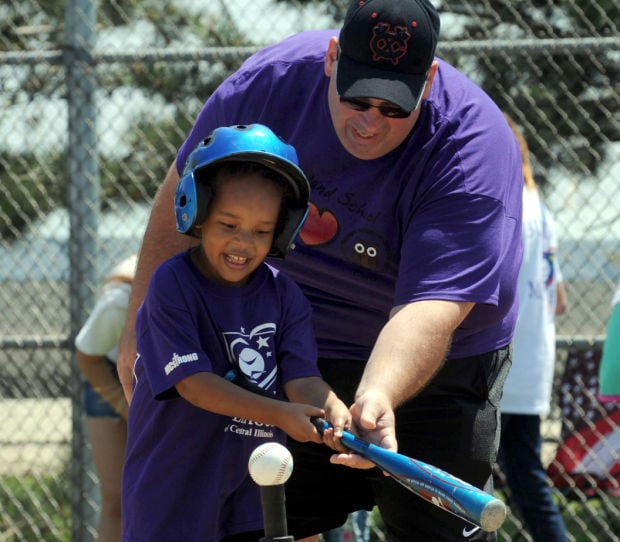 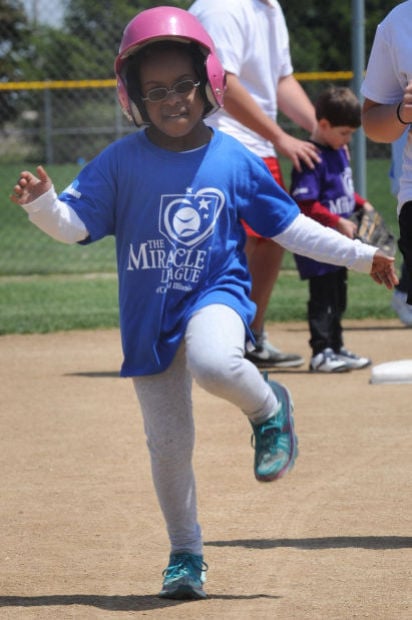 Karen Kinley, 7, of Bloomington sprints to third base during the Miracle League game Sunday.

BLOOMINGTON — The postgame interview with Patrick Haynes was going to have to wait.

After hitting a fly ball to deep center field that hopped the fence — a home run in the Miracle League of Central Illinois rules —  the 14-year-old had other matters to attend to after Sunday's season opener. Even receiving congratulations and high fives from volunteers, teammates and coaches was only delaying the traditional singing of "Take Me Out To The Ballgame." That was Patrick's big moment.

The league provides physically and mentally challenged boys and girls a safe and spirited program in which they can play baseball on a baseball field just like other kids.

"He loves everything about this," said his father, Todd Haynes. "It is just a wonderful opportunity for them that they probably otherwise wouldn't have."

"That is the most we have ever had," she said. "It is terrific that this league continues to grow every year. It's exciting for everyone."

The Miracle League removes the barriers that keep children with mental and physical disabilities off the baseball field and lets them experience the joy of baseball, said the local league's president, Mike Holley. Players may have such conditions as autism, Down syndrome, cerebral palsy or attention deficit hyperactivity disorder.

There are three noncompetitive games each Sunday from the third Sunday in May through June 22. There will be one night game scheduled for July.

Each player receives a team uniform with their first name on the back and a baseball hat. Each player gets to bat each inning and gets to circle the bases to score a run each inning.

Each player scores and is never called "out." There are two innings per team per game.

Teams use a 9-inch soft-core safety baseball and each player has an assigned buddy for each game.

"I can't say enough about the the board of directors for the league, the volunteers and the buddies," said Brad Burke, whose 6-year-old son, Kaden, plays. "There is a lot of hard work involved, but I also think it is a great thing for the volunteers, many who are fairly young, can learn about disabilities and donating their time."

Teams consist of 12 to 13 players each, and each player receives a trophy at the end of the year.

The league currently plays on the McLean County PONY Baseball field at Ireland Grove and Towanda Barnes roads in Bloomington. But this fall, Miracle League organizers will break ground on a $1.2 million facility northwest of The Corn Crib in Normal on land donated by nearby Heartland Community College.

The field will be made of recycled rubber to make play easier for children who use wheelchairs and walkers.

A number of fundraisers will be held to help raise money for the field. State Farm has committed to donate $150,000 over three years to the league to help with the construction.

A dinner auction is scheduled for Friday, Aug. 1. Former Chicago Bears quarterback Jim McMahon will be the keynote speaker.

"We have never had a speaker before and very excited to have him come to town," Holley said. "That will be a special night for everyone."

Holley doesn't have kids who play in the league, but he has two sons who volunteer on game days.

"I just kind of stumbled across this," he said. "I was out here watching one of my kids play on a nearby field and I heard all of the excitement coming from this field and it drew me over.

"I saw it as an opportunity for me and my kids to give something back to the community as well. But watching these kids play and the fun they are having, is definitely worth it."

NORMAL — Uncle Bill's dream will become reality on Saturday for 82 people who use wheelchairs or walkers, are sight- or hearing-impaired or ha…

From left to right, John Munn, 12, Kurt Kinley, 13, and Chris Mercia, 12, all of Bloomington, hang out in the dugout before Kinley bats during the Miracle League opening day Sunday.

Karen Kinley, 7, of Bloomington sprints to third base during the Miracle League game Sunday.