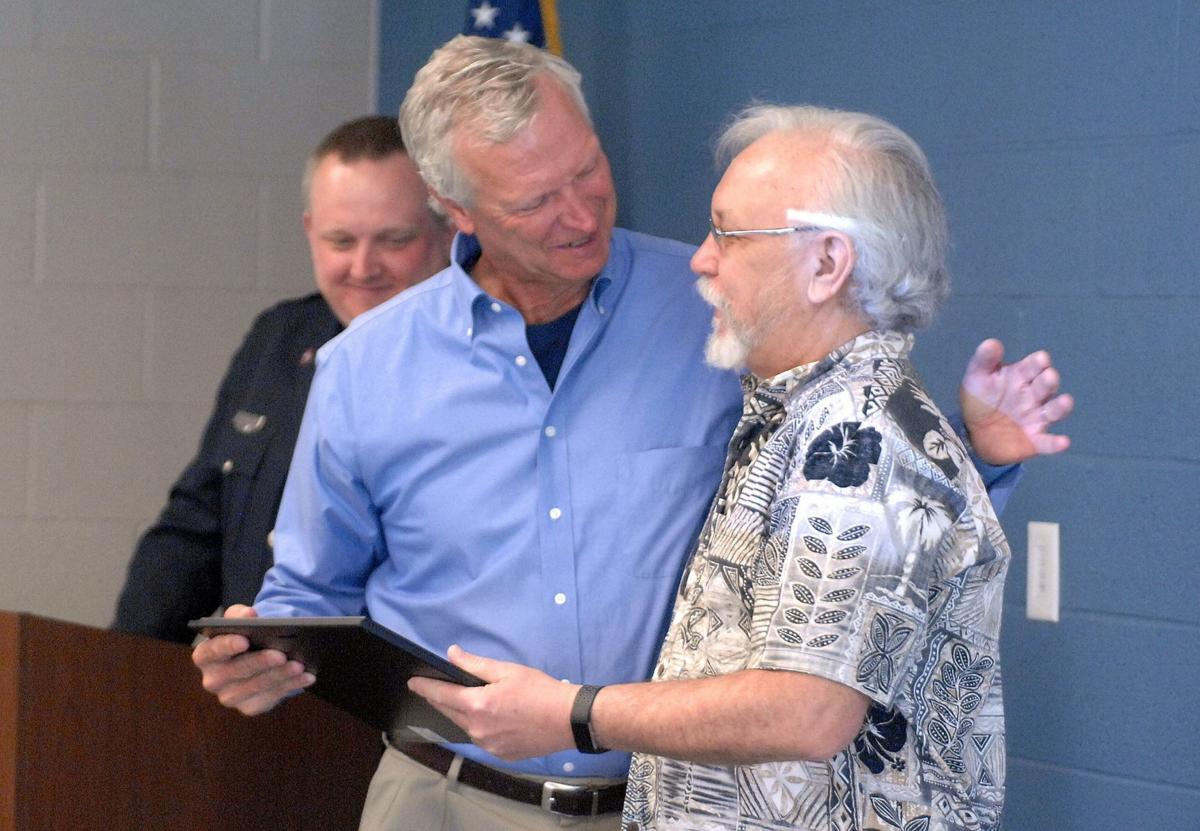 Duane Kolbus of Normal, left, pats Kalley Powell of Bloomington on the back as Powell presents him with a Life Saving Award on Tuesday at the Normal Fire Department headquarters. 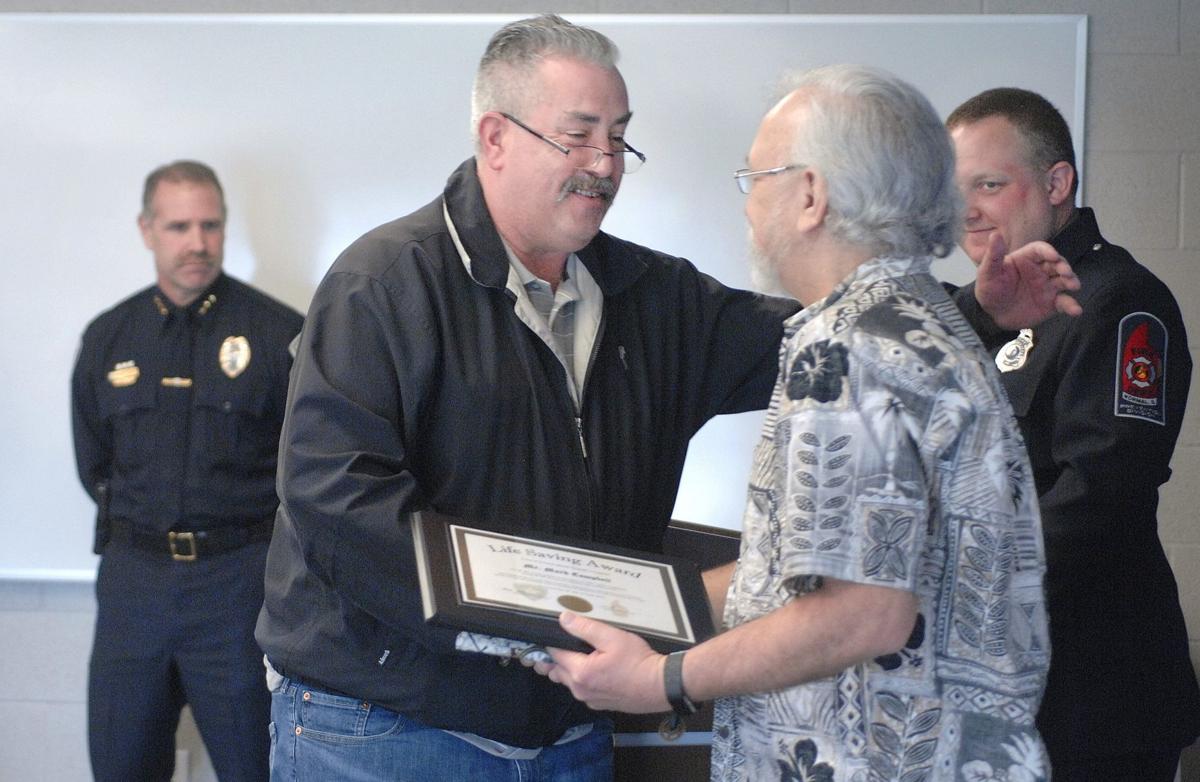 Kalley Powell of Bloomington, right, gives Mark Campbell of Normal a Life Saving Award from the town of Normal on Tuesday during a ceremony at the Normal Fire Department headquarters. 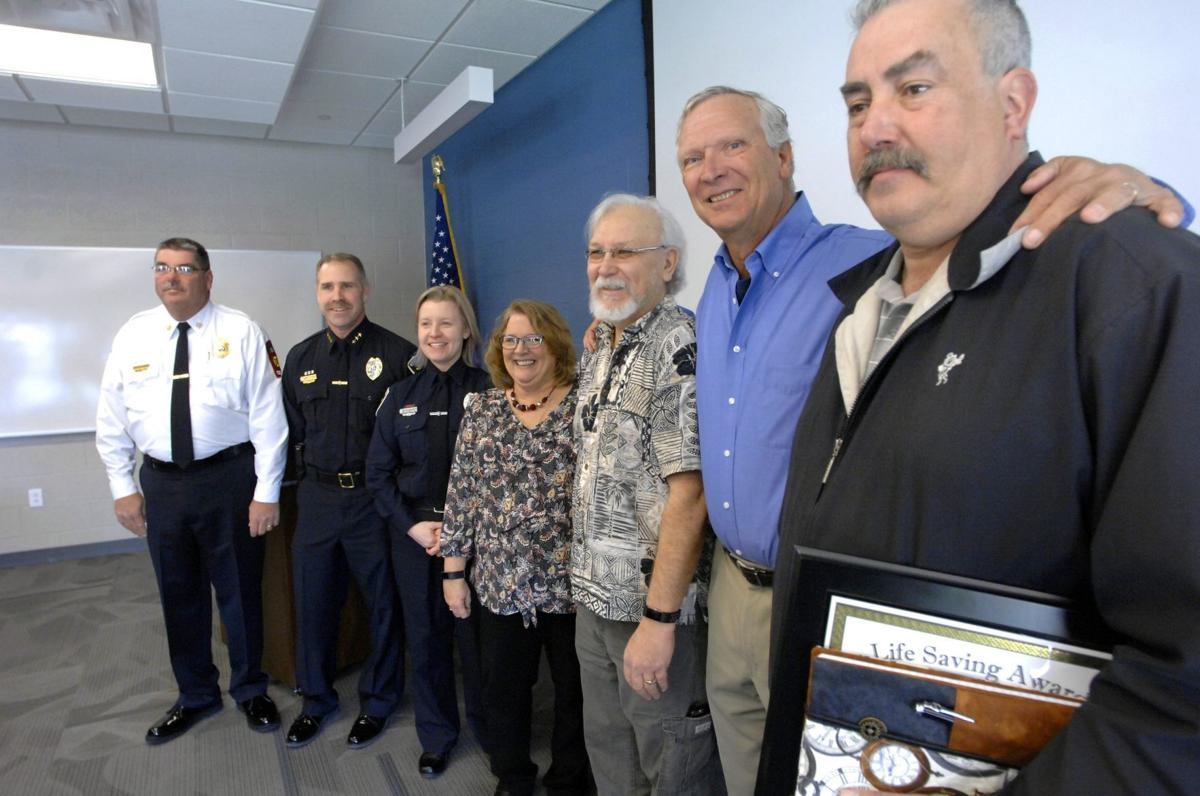 NORMAL — Three drivers who took action during what some believe to be a Christmas miracle on Veterans Parkway last December were honored on Tuesday.

Duane Kolbus, Mark Campbell and Chris Metz were presented Life Saving Awards from the town of Normal during a ceremony at the Normal Fire Department headquarters. They were presented by Kalley Powell, the Bloomington man whose life they saved when they pulled him from his running car at Veterans Parkway and College Avenue, performed CPR and called 911 after his heart stopped, resulting in a two-vehicle crash.

"We were all supposed to be there at that time," said Normal police patrol officer Amanda Street, who took over chest compressions from Kolbus.

"It's nice to be recognized," said Kolbus, of Normal. "But I just did the right thing."

Kolbus was southbound on Veterans Parkway and stopped at the College Avenue light about noon Dec. 21 when another car hit the back of his car.

Kolbus saw that vehicle's driver, Powell, with his head against the headrest and rocking back and forth, his eyes glazed over and his tongue out of his mouth. Powell's car was still in gear.

Kolbus stuck his arm through Powell's partially opened window and put the car in park. Campbell, of Normal, who had been driving a taxi cab behind Powell, turned off Powell's car.

Kolbus and Campbell figured Powell was having a medical emergency so they pulled him out of his car and laid him down on Veterans Parkway.

They realized he had stopped breathing. Chris Metz of Fairbury, who had been driving behind Campbell, found that Powell didn't have a pulse.

"I wasn't watching for traffic," Metz said. "I was just holding his hand and telling him it would be OK."

Street arrived and took over chest compressions. "I heard a breath," Street recalled.

After another 30 seconds, paramedics with the Normal Fire Department took over.

Powell, 63, of Bloomington, who has no memory of what happened, said he found out later that he suffered cardiac arrest, meaning abrupt loss of heart function. CPR and defibrillation, which was used to shock his heart back into rhythm, helped to reverse his cardiac arrest and save his life.

On Dec. 26, a cardioverter defibrillator/pacemaker combination device was implanted in Powell's chest and he was discharged on Dec. 27. He goes to cardiac rehab, walks daily and is eating healthier.

"I think it's pretty unbelievable what they did in that situation," Powell said. "It's almost miraculous that the people who were there knew what to do and were willing to do it."

"People need to learn CPR and don't be afraid to jump in and help," Campbell said. "You'll be scared but you could save someone's life."

NORMAL — When her mother fell out of bed and began convulsing on the floor, Kylee Shepherd knew what to do.

Duane Kolbus of Normal, left, pats Kalley Powell of Bloomington on the back as Powell presents him with a Life Saving Award on Tuesday at the Normal Fire Department headquarters.

Kalley Powell of Bloomington, right, gives Mark Campbell of Normal a Life Saving Award from the town of Normal on Tuesday during a ceremony at the Normal Fire Department headquarters.