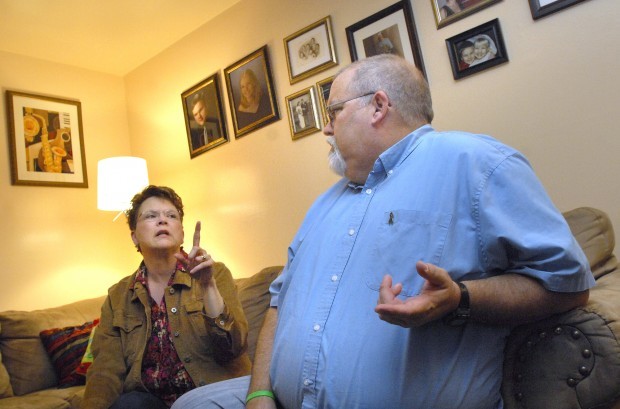 Vivian and Larry Lefferts talk about the contributions of their son, John, Friday, Dec. 14, 2012, after John died of an internal hemorrhage. More than 37 people have received tissue donations following his death. (The Pantagraph, David Proeber) 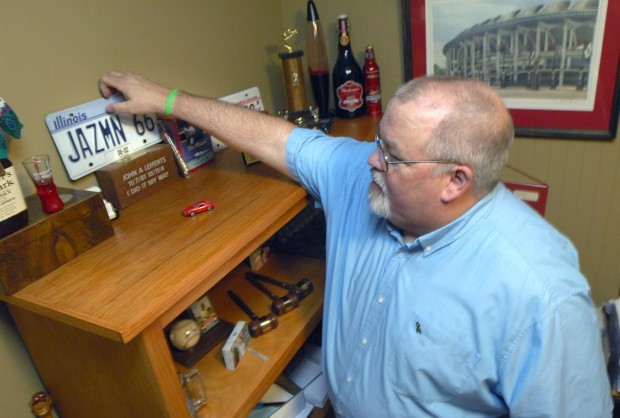 Larry Lefferts examines odds and ends that belonged to his son, John, on a bookcase in his office, Friday, Dec. 14, 2012. John died after an internal hemorrhage. More than 37 people have received tissue donations following his death. (The Pantagraph, David Proeber)

NORMAL — Since John Lefferts died suddenly and unexpectedly of an aortic dissection at age 22, his family has been on a journey.

“I feel like my heart is truly broken,” said his mother, Vivian Lefferts of Normal. “After my son died, I thought ‘How will I tell people about John? How will I keep his memory alive?’”

A path chosen by Vivian and Larry Lefferts was to keep their son’s memory alive by helping others to live. They agreed that their son would be a tissue donor. His two corneas and 35 bones and tissues have improved the lives of 37 people in 14 states.

“It’s a way for his legacy to live on,” said Eleanor Hess of Normal, John’s sister.

The Lefferts became volunteer-advocates with the Gift of Hope Organ & Tissue Donor Network. They have spent much of the past eight years encouraging people to register to be organ and tissue donors by telling John’s story.

They are members of the organization’s Donor Family Advisory Council and led a letter-writing campaign supporting the bill that created the Illinois Organ/Tissue Donor Registry in 2006.

Their efforts are being honored with Vivian’s selection to be among 32 riders from throughout the country on the Donate Life Float during the Rose Parade in Pasadena, Calif., on Jan. 1. Riders will include living donors, organ and tissue donation recipients and donor family members.

“The Lefferts stand out because of the commitment they have shown to raise public awareness,” Sullivan said. While Vivian will be on the float, she represents Larry, Eleanor and other family members who will be watching the parade in Pasadena.

“We can’t think of a better representative than Vivian,” Sullivan said. “The theme of this year’s float is Journeys of the Heart. When John died, the Lefferts started on a journey of the heart and they have been on that journey for more than eight years.”

Vivian said, “It’s an honor to take John’s story to another level.”

John was a likeable young man and loyal friend who would lend money to people in need and pick up friends who needed rides in the middle of the night. He was great with kids and liked helping older adults. At the time of his death on Oct. 11, 2004, he was living in Springfield, working in patient transportation at Memorial Medical Center and studying at Midwest Technical Institute to be a massage therapist.

A friend who was a therapist told John that he had “a healing aura,” his father recalled.

On Oct. 11, 2004, John wasn’t feeling well. Vivian — who then lived with Larry in Athens — came to John’s Springfield apartment to help him.

“I took a load of laundry to the car,” his mother recalled. “When I came back to his apartment, he was on the floor. He didn’t appear to be breathing.”

She called 911 and John was taken to Memorial. The Lefferts were told later that John had an aortic dissection, an uncommon condition in which a tear in the aorta (the blood vessel that branches off the heart) results in a blood surge that causes the aorta to rupture. An aortic dissection often is fatal.

“The nurse and emergency room doctor said they did everything they could,” Larry said. “We sat there, dumbfounded by it all.

“After the initial shock, we talked about donation,” his father recalled.

“It fit John, his personality and compassion and how he lived his life,” said Eleanor, now 29 and a music education teacher in Lexington.

Because his organs had been without oxygen for awhile, they couldn’t be donated. But his cornea, bones and tissue enhanced the lives of 37 people in 14 states, including a staff sergeant whose knee was rebuilt.

“He’d be happy with how many lives he’s been able to help,” Eleanor said.

After John’s death, Vivian and Larry — who moved to Normal in 2008 — became involved in Gift of Hope and know that their efforts have convinced others to register to be donors.

But their heart-felt work also has brought them comfort.

“Knowing that part of John lives on in others has brought relief to the family,” his mother said.

His father agreed. “Healing has come from tragedy.”

- Major organs that can be donated for transplant are the liver, heart, lungs, kidneys, pancreas and small intestine. Tissues that may be donated include the corneas, bone, veins, heart valves and skin.

- A living donor may give one of two kidneys or part of a liver, lung or pancreas.

- Register to be an organ and tissue donor at www.GiftofHope.org, www.LifeGoesOn.com or when you renew your driver’s license at the Secretary of State’s Office.

Including: Float 48, of 92 float entries, is the Donate Life Float. Among 32 riders will be Vivian Lefferts of Normal.

BLOOMINGTON — Noah Dean Baker has a second chance at life, so he’s remaking himself. Gone is the high-flying, heavy-drinking real estate professional who was more concerned about money, clothes and travel bonus points than helping his fellow man.

Vivian and Larry Lefferts talk about the contributions of their son, John, Friday, Dec. 14, 2012, after John died of an internal hemorrhage. More than 37 people have received tissue donations following his death. (The Pantagraph, David Proeber)

Larry Lefferts examines odds and ends that belonged to his son, John, on a bookcase in his office, Friday, Dec. 14, 2012. John died after an internal hemorrhage. More than 37 people have received tissue donations following his death. (The Pantagraph, David Proeber)