BLOOMINGTON — An honor guard offering a 21-gun salute and trumpeter sounding taps were the only ones to brave the cold for the outside portion of the traditional Veterans Day celebration Monday in downtown Bloomington.

Marking the 100th anniversary of the first Armistice Day commemoration, dozens of veterans and families shuffled up the snowy steps of the McLean County Museum of History before the 11th hour struck to join the celebration inside.

“I suggested (going outside) once the snow starts slowing down, but I kind of got outvoted,” said Bob Sable, master of ceremonies and commander of Bloomington's American Legion Louis E. Davis Post 56 and John H. Kraus Veterans of Foreign Wars Post 454.

Local veterans crowded into the rotunda, where hot coffee and familiar faces greeted them. The crowd sang along to the "Star-Spangled Banner" and finished the ceremony with a chorus of “God Bless America.”

“This day belongs to all veterans. From the minuteman of the Revolutionary War to the warriors fighting around the world today, the line of Americans willing to risk their lives for this country is long,” said Staff Sgt. Keith Albaugh of the Illinois Army National Guard, the ceremony’s keynote speaker. “This day belongs to them and it belongs to you.”

Though many associate Veterans Day with Memorial Day, Sable said being apart of this ceremony clarifies the difference.

“Veterans Day is the day we celebrate the men and women that serve our country,” he said. “Memorial Day is reserved for the dead; Veterans Day is more a celebration.”

The cold November morning couldn’t be confused for its spring counterpart, but Albaugh said he still saw it fitting to pay homage to those died in service.

“I promised myself I wouldn’t cry,” he said with a chuckle.

Despite his best efforts, Albaugh’s eyes were wet and his voice shaky as he remembered the 18 National Guard soldiers of the 33rd Infantry Brigade Combat Team who were killed during an Afghanistan deployment in 2009.

“Each individual is not just a number or statistic. They were a mother, a father, a son, a daughter, a brother, a sister,” he said. “They were warriors who believed in something greater than themselves.”

Albaugh described his fellow service members and the veterans who came before him as people who “lived uncommon lives under a common banner.”

Many of those who came to the ceremony continue to honor that common banner, donning coats marked with U.S. flag patches and hats covered in pins. One woman held a folded flag to her chest as she listened to the speakers.

In quoting Abraham Lincoln, Albaugh’s favorite U.S. president, he said, “To care for him who shall have borne the battle and for his widow, and his orphan.”

“Lincoln’s immortal words are a solemn reminder that as a nation, we owe a debt of gratitude to our veterans and their loved ones,” he said.

Ruel Neal American Legion Post 79 honored three LeRoy natives who died in World War II on Monday as the stretch of Interstate 74 that passes through town was named for them.

"These three brothers and their families back home paid the ultimate price to secure our freedom during World War II," said state Sen. Chapin Rose, R-Mahomet. "I hope that this memorial will keep the memory of their service and sacrifice alive to inspire future generations and to remind us all of the costs of our freedoms."

The Senate resolution to dedicate the highway was filed by Rose, sponsored by then-state Rep. Bill Mitchell, R-Forsyth, and passed unanimously in the 100th General Assembly.

No snow but deep-winter cold expected Tuesday in Central Illinois

This is a developing list of weather-related closures and cancellations for Monday, Nov. 11. Have one to add? Email newsroom@pantagraph.com

From a wool uniform dating back to World War I to a set of “cammies” in lightweight synthetic material, every item on display in “Boot Camp: A Century of Military Attire” at Illinois State University's Turner Hall has a story to tell.

Separate Veterans Day observances at Illinois State University and Heartland Community College shared a common theme: Veterans not only served their nation in uniform, they continue to serve their communities when they return.

Heroes of Habitat house, in memory of Sgt. Josh Rodgers, blessed in Bloomington

The freedoms that Sgt. Josh Rodgers died protecting were celebrated Monday evening with heartfelt prayers, thoughtful remarks and the joyful stomping of children's feet as the first Heroes of Habitat house was dedicated in Bloomington. 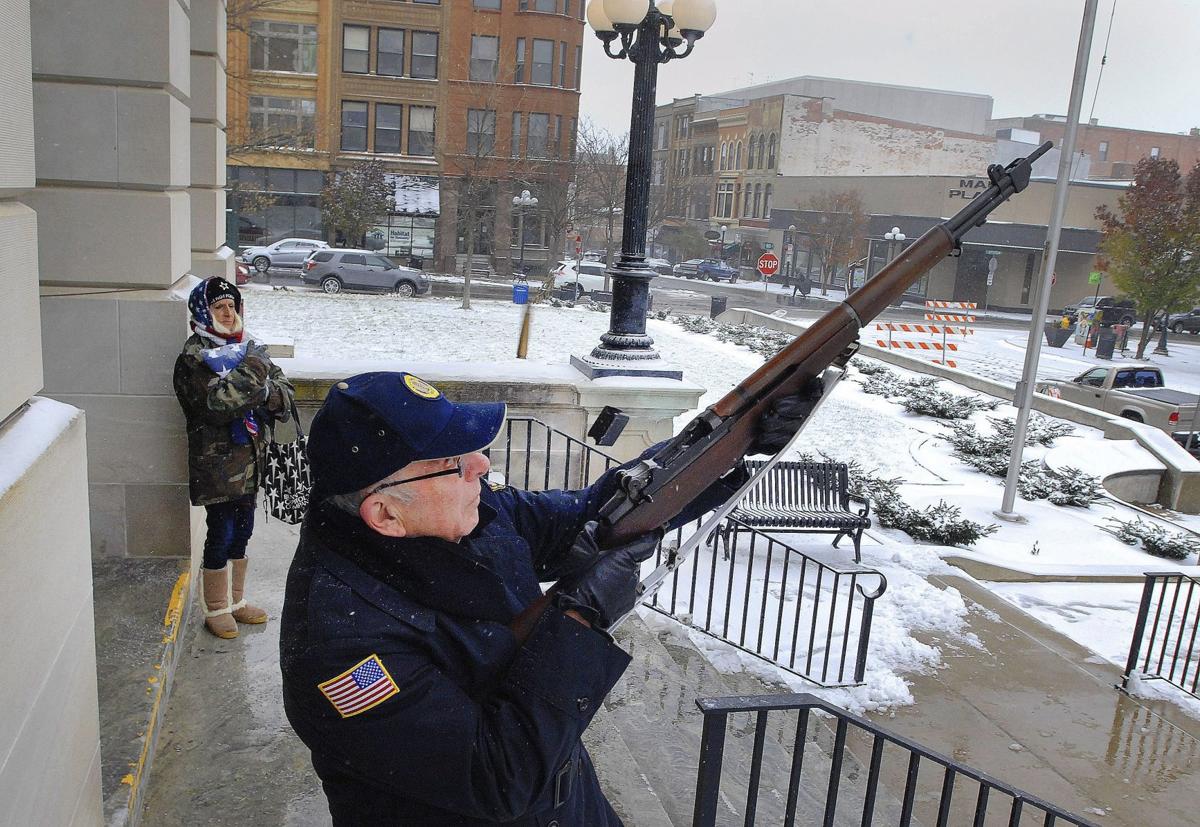 U.S. Air Force veteran Rick Ross from Bloomington's American Legion Louis E. Davis Post 56 fires an M-1 rifle once a minute for the 11 minutes leading up to 11 a.m. Monday, Nov. 11, 2019, as part of the Veterans Day ceremony at the McLean County Museum of History in downtown Bloomington. 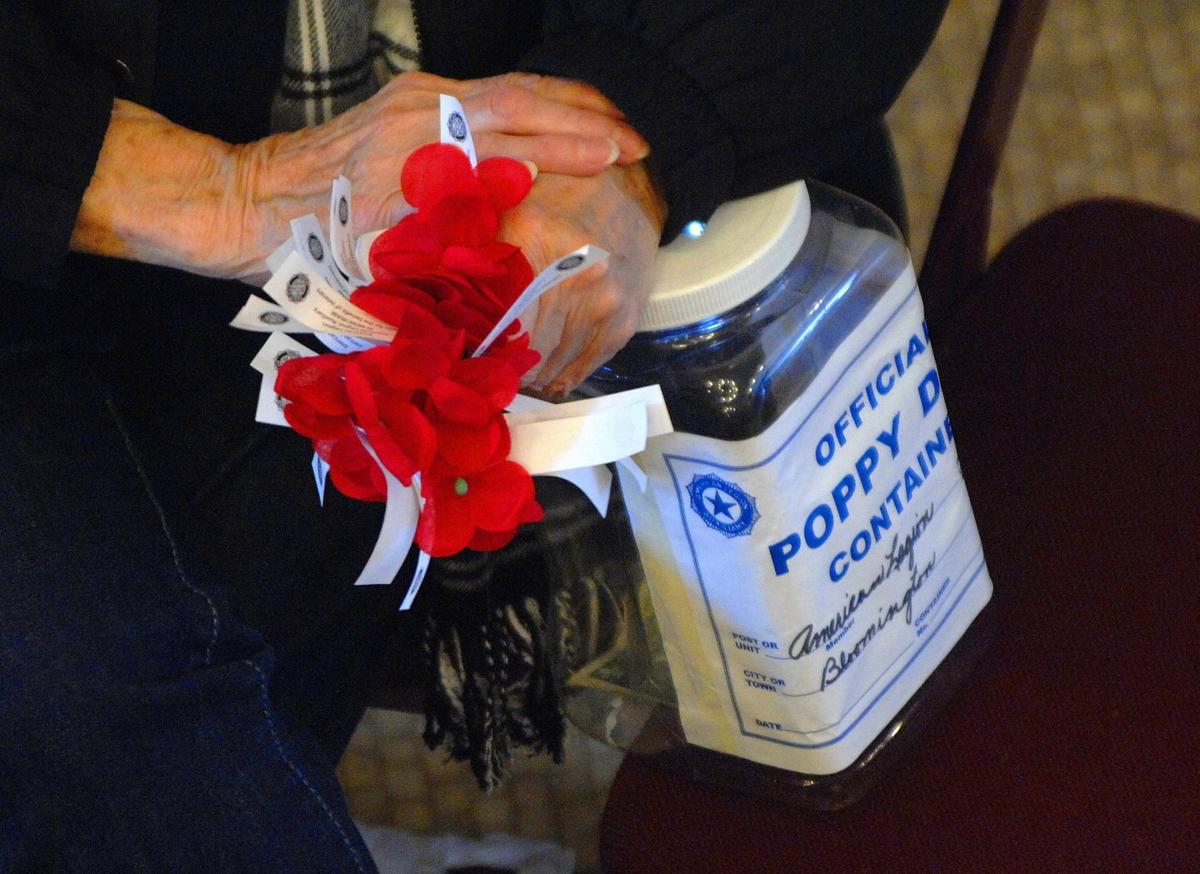 A woman holds a bouquet of artificial red poppies during the ceremony. Poppies are traditionally associated with Armistice Day and are sold to benefit services for veterans. 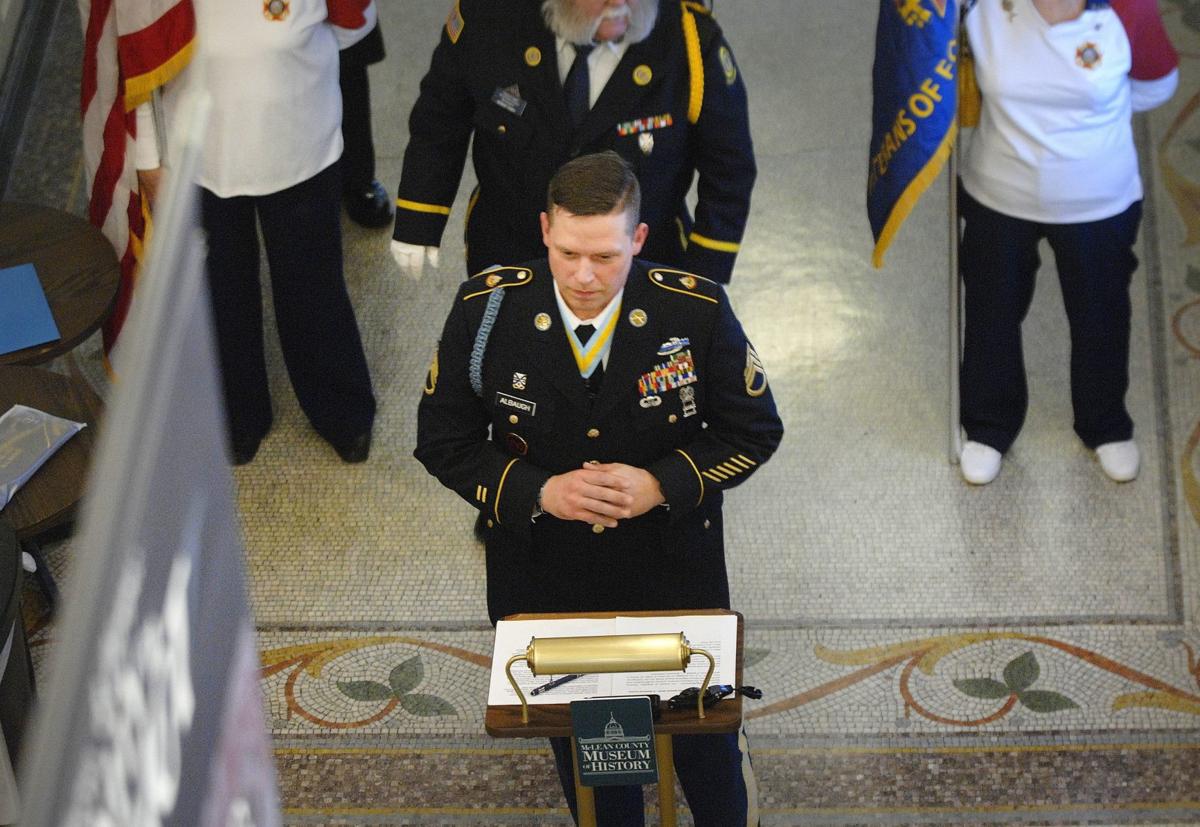