What's in the state budget lawmakers approved this weekend? Here are some highlights

BLOOMINGTON — A 10th person in McLean County has been confirmed as having the novel strain of coronavirus as Macon County announced its first two cases.

McLean County Communications Specialist Dion McNeal confirmed Friday evening that a woman in her 80s is the 10th person in McLean County to be diagnosed with COVID-19.

She is hospitalized in an intensive care unit.

Earlier Friday, the McLean County Health Department announced the county's ninth person to test positive for the virus that has caused a worldwide pandemic. She is a woman in her 60s who also is hospitalized in an intensive care unit.

One patient is a woman in her 50s who is isolated in the HSHS St. Mary's Hospital intensive care unit in Decatur.

The second patient is a man in his 60s who was tested through the Decatur Memorial Hospital Respiratory Clinic and has been self-isolating at home since his symptoms began. Public health officials are working to monitor individuals who have been in contact with the two people to reduce spread of the disease.

LaSalle County Health Department confirmed late Friday an additional COVID-19 case in LaSalle County. The man in his 80s is hospitalized in isolation.

As of Friday night in McLean County, the health department had been notified that 104 people in McLean County have tested negative for COVID-19 while test results were pending for another 37 people.

Health department Administrator Jessica McKnight and McNeal were at the McLean County fairgrounds on Friday afternoon for setup of a COVID-19 testing site that opens Saturday for people who meet certain criteria.

Asked how many people in McLean County may have COVID-19, McKnight said there is "no real way to estimate that" because testing has been limited.

Her advice to people who experience COVID-19 symptoms (fever, cough, sore throat and shortness of breath) is to "stay home and treat yourself like you do have it to prevent spreading it if you have it or contracting it if you don't."

"The confirmation test is not going to change the treatment," she said. "We encourage you to stay home and treat those symptoms."

When symptoms worsen, people are asked to call their health care provider who will determine whether testing or hospitalization is needed, she said.

Asked about people who want to be tested but aren't being tested because of limited testing supplies, McKnight said: "We understand their frustrations. We wish more people could be tested."

"All the more reason we're happy this testing site is here," she said.

Meanwhile, Illinois Department of Public Health announced 488 new confirmed cases of COVID-19, bringing to 3,026 the number of Illinoisans with the novel virus.

Among counties announcing cases for the first time was Iroquois.

Thirty-four Illinoisans have died of COVID-19, including a McLean County woman in her 70s who died late last week.

In addition to McLean, Iroquois and Macon, other Central Illinois counties with people with coronavirus include Livingston (two people), LaSalle (three), Marshall (one), Woodford (three), Tazewell (two), Peoria (six), Champaign (ten), Sangamon (seven), Morgan (one), Christian (one), Douglas (one) and Cumberland (one).

While there is no specific treatment for COVID-19, about 80 percent of the cases are mild to moderate and most people get better after a couple of weeks.

The coronavirus pandemic is causing anxiety to peak in Central Illinois but there are steps that people can take to help themselves and others, mental health professionals said.

An out-of-state student who is a resident of DeWitt County has tested positive for the coronavirus, the first person from the county to do so. The student lives in Missouri and has not been in the county since testing positive.

The coronavirus outbreak might keep them out of school, but kids in Bloomington-Normal haven’t stopped practicing their counting, finding hearts and bears hiding throughout their neighborhoods.

An 11th case of the coronavirus has been confirmed in McLean County, officials announced Saturday afternoon and state health officials say an infant is among the 13 new deaths reported Saturday. 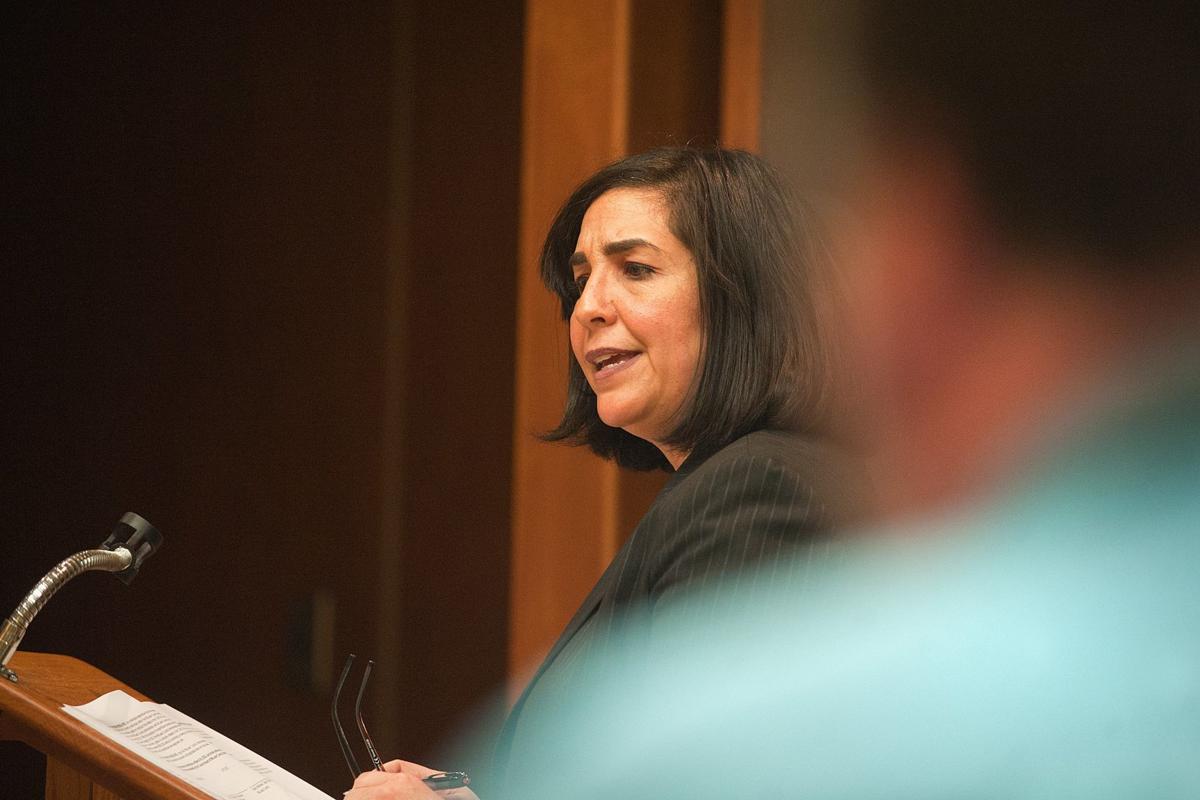 McLean County Administrator Camille Rodriguez speaks to the McLean County Board during its meeting on Thursday evening, March 26, 2020, at the Government Center in downtown Bloomington. Rodriguez detailed the county government's COVID-19 response to try to keep county government functioning while respecting social distancing to reduce the spread of the virus.