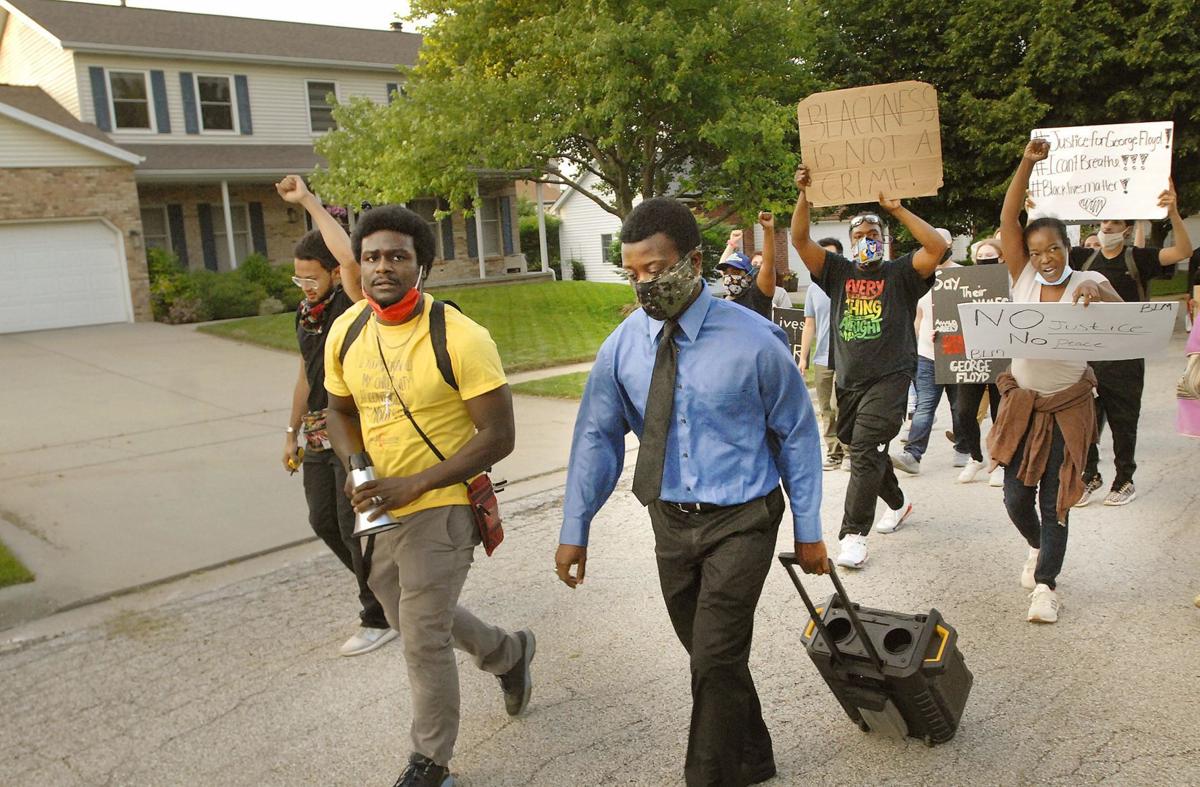 About 50 protesters march through Eagle Ridge subdivision on Bloomington's east side, Monday, June 1, 2020, as they attempt to bring their message of justice to one of the city's more affluent neighborhoods. 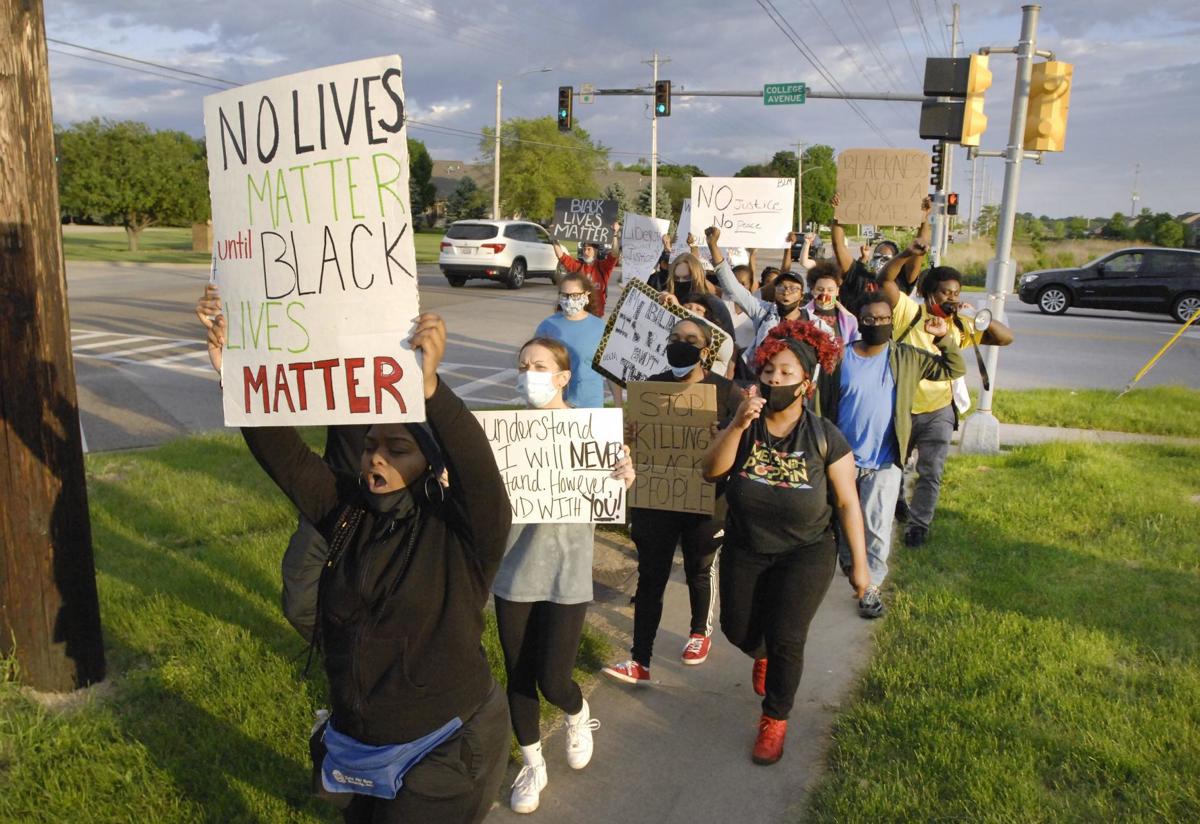 Protesters chant for justice as they march from Tipton Park in Bloomington, Monday, June 1, 2020. The protesters said they wanted to be able to share their message with people living in one of the city's more affluent neighborhoods. 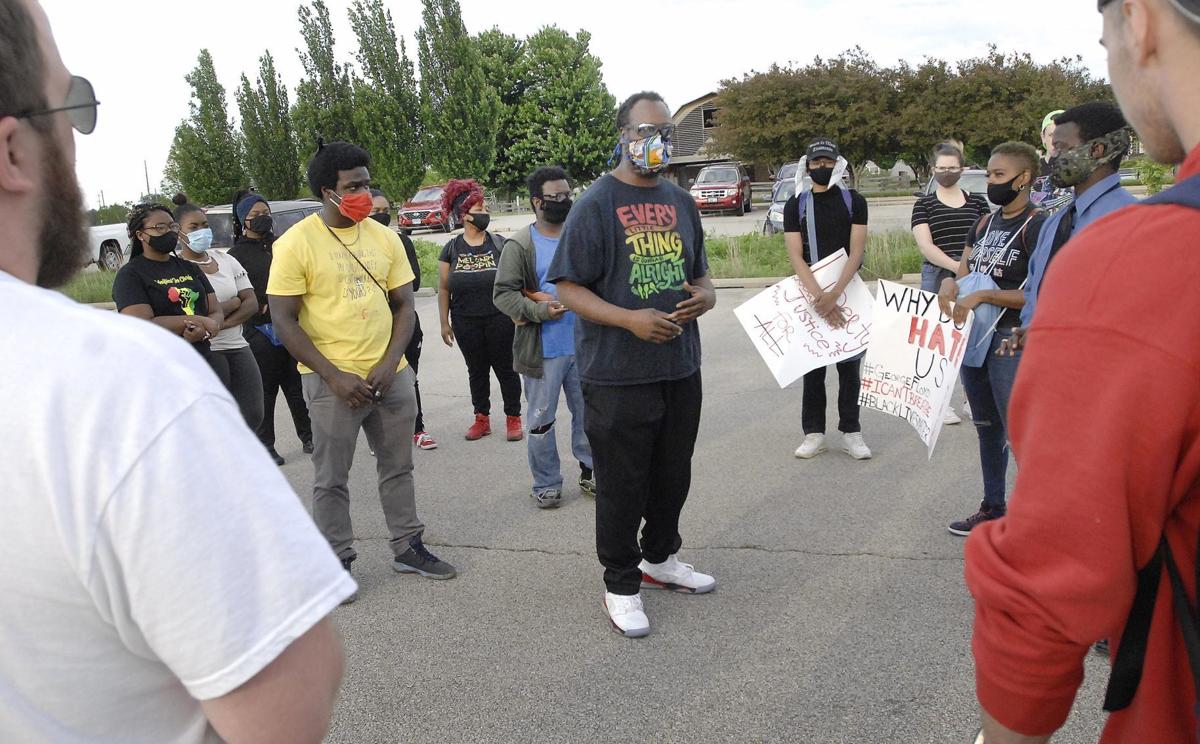 Allen Chambers of Bloomington addresses marchers before they take their message of justice to Eagle Ridge subdivision on Bloomington's east side, Monday, June 1, 2020.

BLOOMINGTON — A group of about 40 people marched through east-side Bloomington neighborhoods Monday night with chants of “No justice; no peace” and “Love one another.”

The group, calling itself Next Generation Initiative, brought its demonstration to the east side because “we want to be seen by them. We want to be heard by them,” said Dominique Stevenson, one of the organizers.

With chants of "Love one another " marchers carried their message to East Side neighborhoods Monday night. pic.twitter.com/K0PgvUKYxj

While the death of George Floyd at the hands of police in Minneapolis — and other police-involved deaths blacks elsewhere — was an inspiration for the march, Stevenson said the goals go beyond protesting the past.

He said better laws are needed to be in play for police “who abuse their power to be held accountable.”

He said it is important to identify specific goals.

“If we have no purpose, it’s just talk,” said Chambers.

As the group walked from Tipton Park along Airport Road and into residential neighborhoods, passing motorists honked their horns and waved. Although one person was heard to yell “Go … home,” others in the residential areas either waved or watched silently.

The violence and looting that broke out in parts of Bloomington-Normal overnight Sunday into early Monday was another reason for the march — to show they support peaceful dialogue, said Stevenson.

“That’s why we wanted to get right back out here,” he said. It was a way to answer the question of whether “I’m part of the mayhem or part of the solution."

She said even though her great-grandfather was killed by the Ku Klux Klan, “my grandfather told me, ‘Don’t hate white people.’”

Linda Foster, president of the Bloomington-Normal @NAACP addressed a group at Tipton Park before a march through east-side neighborhoods Monday night. pic.twitter.com/3WWVIjr0f9

Mayor Tari Renner was attacked and shoved to the ground late Monday by protesters who were at Eastland Mall.

People responsible for the looting and vandalism in Bloomington-Normal during the past two days should reconsider their tactics but other people should listen to them to understand why they are protesting, community leaders involved in social justice said Monday.

Bloomington-Normal retailers cleaned up Monday after a night of vandalism and looting that followed protests about the death of a black man by a white police officer in Minneapolis.

More than 100 incidents of vandalism reported in Bloomington-Normal

The mayors of Bloomington and Normal are going to let local law enforcement determine how to proceed to deter the looting and vandalism that occurred Sunday night and early Monday after a rally in Bloomington that drew more than 1,000 to show support for George Floyd.

Looters broke into Kohl's at Eastland Mall late Monday, one of several cases across the area overnight and into Tuesday.

A Bloomington man accused of riding his motorcycle into a protest rally Sunday and reportedly striking two people was charged Tuesday with hate crimes and other felonies.

Illinois State University is looking into social media posts with racist and homophobic comments attributed to current or incoming students.

Local police chiefs, sheriff to meet with NAACP, Not In Our Town Monday

Local police chiefs and McLean County Sheriff Jon Sandage will meet with members of the Bloomington-Normal branch of the NAACP and Not In Our Town (NIOT) leaders Monday at noon in front of the Bloomington Center for the Performing Arts.

About 50 protesters march through Eagle Ridge subdivision on Bloomington's east side, Monday, June 1, 2020, as they attempt to bring their message of justice to one of the city's more affluent neighborhoods.

Protesters chant for justice as they march from Tipton Park in Bloomington, Monday, June 1, 2020. The protesters said they wanted to be able to share their message with people living in one of the city's more affluent neighborhoods.

Allen Chambers of Bloomington addresses marchers before they take their message of justice to Eagle Ridge subdivision on Bloomington's east side, Monday, June 1, 2020.