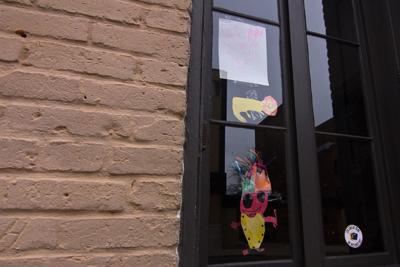 BLOOMINGTON — What is a little girl to do when there's no school, no playmates and no yard to play in, and social distancing has made it difficult to stay connected to her community?

If you are 7-year-old old Sophi Shirazi, you find a medium and a canvas and start communicating, of course.

On Monday, she used colored chalk and a sidewalk to reach out.

Specifically, she and her mother, Andi Shirazi, wrote encouraging messages in chalk on the sidewalk in front of their downtown Bloomington apartment above Scharnett Associates Architects, 118 W. Washington St.

COVID-19 death toll at 16; Pritzker says stay at home order may be extended

"It was the sweetest thing ever. She came and wrote in front of our door, 'We Love Scout's,'" said Emily Wheeler, manager of Scout's Downtown Cafe, 113 N. Center St.

"We brought out a cookie for her, and we're like, 'Thaaaaanks. We need all the encouragement we can get,'" said Wheeler.

Sophi then gave the restaurant a plastic gold coin and promptly added to her chalk message these words: "For you Scout's, real gold."

"This will make you smile," said Wheeler. "If you look out a window and there's a little girl writing encouraging statements on the sidewalk there's hope. We're going to be good."

Gov. J.B. Pritzker has ordered all restaurants and bars to close through March 30 and shuttered public and private schools until April 8 to limit the spread of the coronavirus.

The businesses can, however, offer carryout, delivery and curbside service.

Her mother used chalk to thank nurses, doctors, teachers, Bloomington District 87 and those who deliver mail and packages.

"This one was just hers," said Shirazi, pointing out her daughter's message. "She said, 'I know something I'm going to write,' and I didn't know what she was going with.

"She writes, 'Life is Great.' Her positivity is just helpful for everybody I think," said Shirazi.

Shirazi, an actuary for State Farm, has been able to work from home and care for Sophi, a first-grader at Bent Elementary School.

"(Sophi) has asthma, so I am actually worried about her because she is a high-risk person," said Shirazi. "I am her entire world right now. That's really hard."

Shirazi is trying to find a balance so that she can maintain her work schedule at home.

"I know this is not a normal time, but I am trying to find a good balance because she's scared and she feels my fear," said Shirazi. "She is going to maybe watch TV, which I normally don't let her do during the week."

Sophi celebrated her birthday last week with a virtual dance party with all her family and friends using the Zoom video conferencing app.

"She had all of her birthday party stuff canceled and she handled it really well," said Shirazi. "We're just finding different ways to connect with our family and friends."

During the shutdown, Scout's has been open from 11 a.m. to 2 p.m. for curbside service and deliveries.

"We've been busy. People are showing a lot of support," said Wheeler. "We're going to stay open as long as we can."

It's an effort bolstered by the words a little girl chalked on the walk outside the business' door, Wheeler added.

The Illinois Department of Public Health said Tuesday there are 250 new cases of coronavirus disease in the state and four more people have died.

“The men and women who serve in the National Guard are ready. The governors are ready. We must not let them down,” the letter said.

BLOOMINGTON — Beer Nuts Brand Snacks has advanced to the final round of the Illinois Manufacturers' Association "Makers Madness" competition.

A rural DeWitt County woman died in a fire Wednesday that destroyed her house about halfway between between Clinton and Farmer City.

State parks remain closed in Illinois, but McLean County’s Comlara Park has reopened its trails and boat ramps, and other options also are available for those experiencing cabin fever — but not real fevers.

Some at State Farm still on the job at facilities

State Farm officials said Thursday that “most” employees have transitioned to work from home arrangements, but in order to continue operations, some employees are required to come in to work.

Two rural Bloomington girls have made more than 200 cards to brighten the days of residents at Evergreen Village supportive living center in Normal. 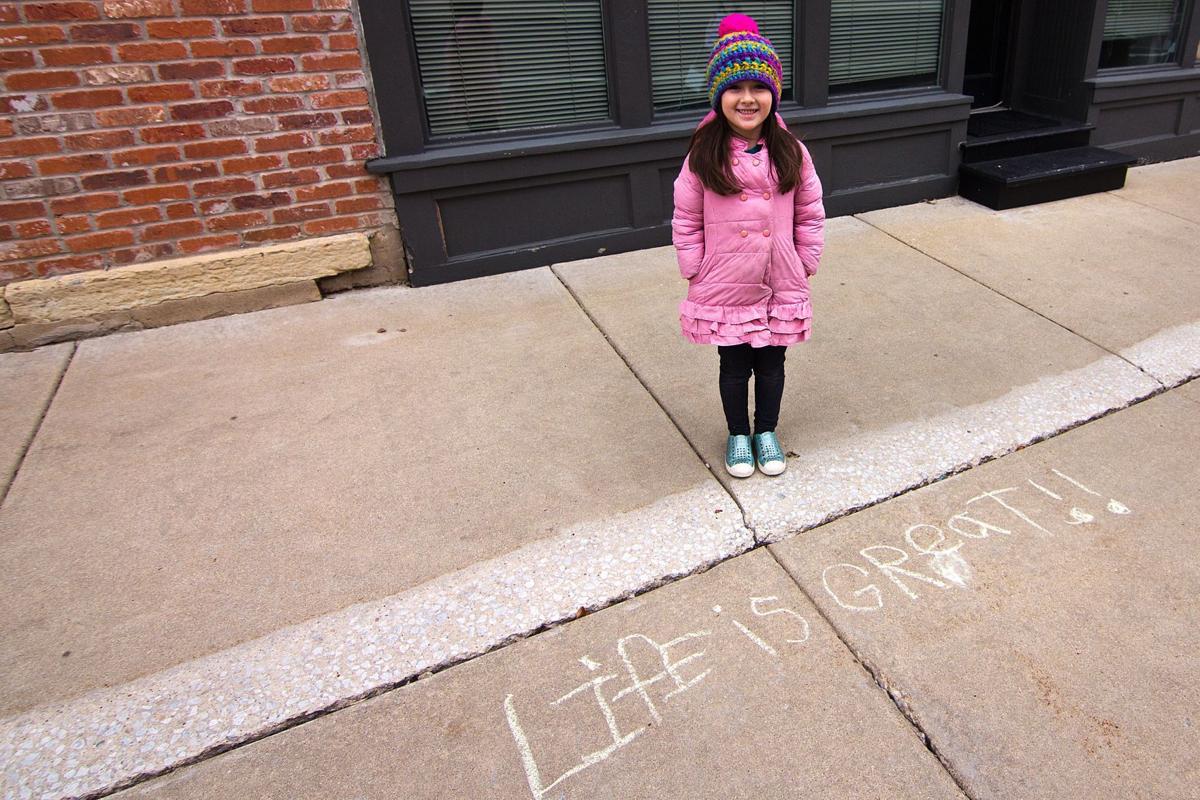 Sophi Shirazi, 7, poses next to one of her chalk creations on a sidewalk Tuesday, March 24, 2020, in downtown Bloomington. 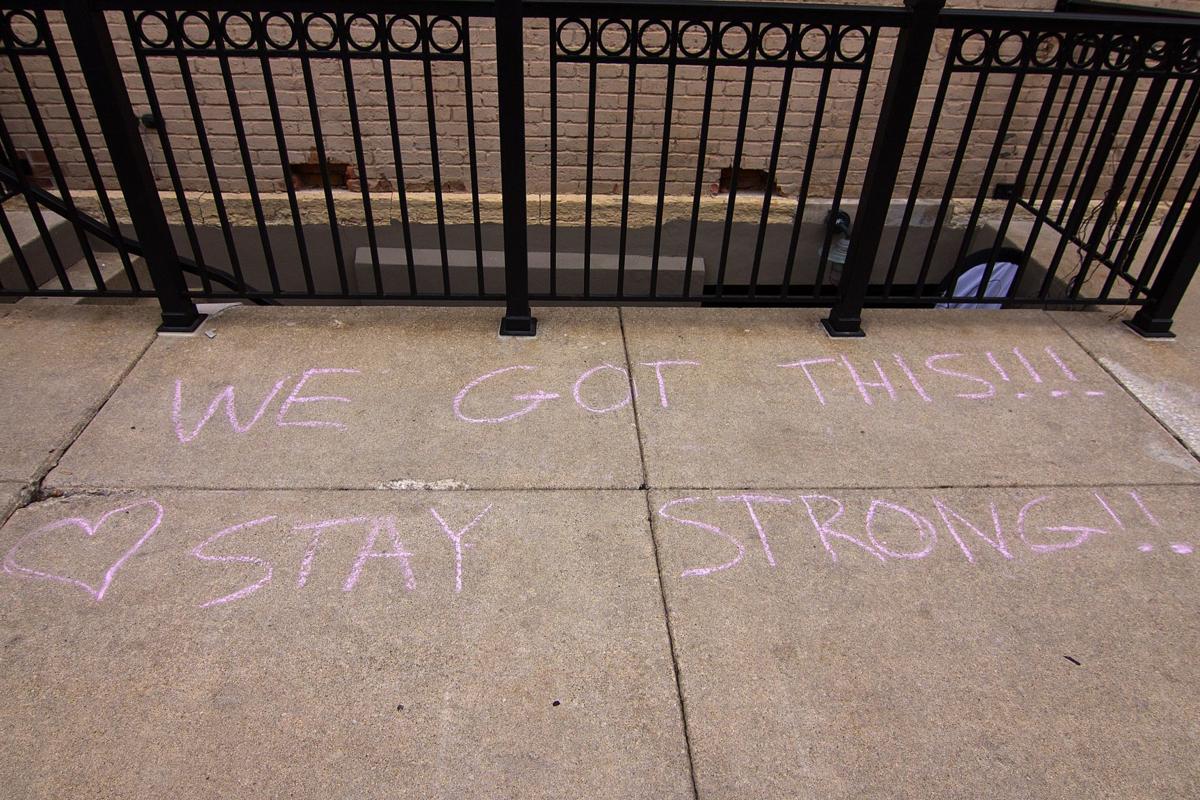 An encouraging message on the sidewalk was written with chalk.