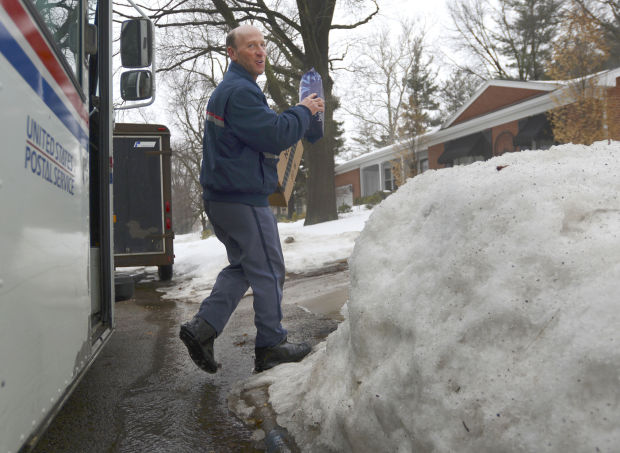 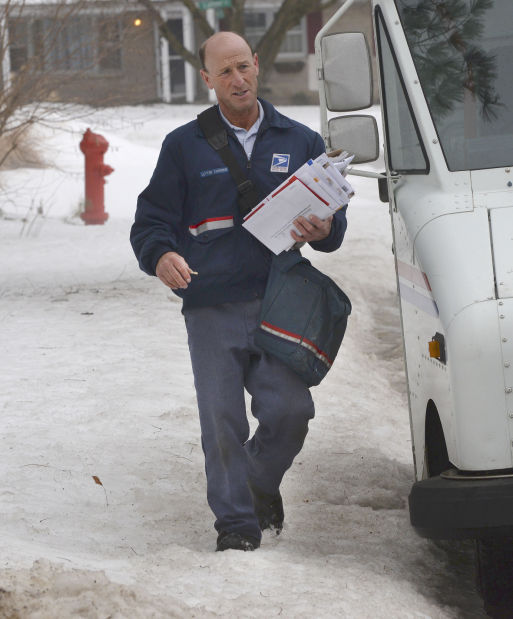 Keist walks through deep snow Thursday along his route on Sheridan Road in Normal. 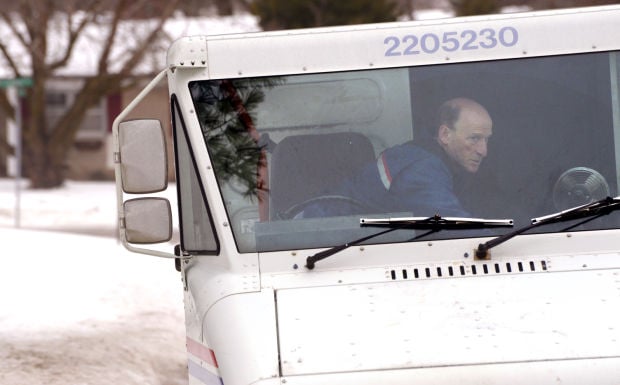 NORMAL — Walking briskly, Gary Keist stepped through mounds of snow, over melting ice and into mud.

"You just gotta plow right through," Keist said, his mail satchel hanging from his shoulder and his hands full of mail.

As Keist, a letter carrier for nearly 36 years, delivered mail mid-afternoon Thursday on Sheridan Road in Normal, he plowed through results of the rough winter, even though Thursday's temperatures were unusually warm.

"I just follow my tracks from the previous day," Keist said as he stepped through snow in front yards, soaking not only his boots but the bottom of his pants.

"You just keep on moving," said Keist, who has had the same route near Colene Hoose Elementary School for 28 years. "Sometimes (walking though snow and against the wind) you feel like someone's pulling you back. You definitely feel tired when you're done."

Keist, 56, began as a letter carrier in 1978 and said this winter is the worst he's ever worked because of the consistent pattern of snowfalls followed by bitterly cold temperatures with little or no break.

"I've fallen more this winter than I ever have before," Keist said. "But I've always gotten up and haven't been injured. I just fell right, I guess."

Not every letter carrier has been so lucky.

Among Bloomington-Normal area letter carriers alone, at least six have been injured in falls this winter in which injuries were severe enough to require medical treatment and time off work, said Bloomington Postmaster Mark Ford. Among injuries were a severe wrist fracture, torn knee ligaments, a torn rotator cuff and concussions, he said.

Meanwhile, "there have been numerous additional slips and falls in which the carriers brushed themselves off and kept going," Ford said.

During a winter in which some employers called in only essential personnel during days of heavy snowfall and extreme cold, the U.S. Postal Service in the Bloomington-Normal area hasn't had any no-deliveries days, Ford said. On the worst day, Feb. 5, 95 percent of household deliveries were made, he said.

"I think our workforce has done a very commendable job this year," he said.

Kim Herberger, a 14-year letter carrier and vice president of the National Association of Letter Carriers' Branch 522, said letter carriers know to wear boots; layer their clothing, including an outside layer that cuts the wind and keeps out the moisture; cover their head and face when it's bitterly cold; and wear gloves instead of mittens because they need to handle the mail.

Ford said carriers know to be aware of their surroundings and to take shorter strides to reduce fall risks.

Keist prefers walking on snowy lawns over shoveled sidewalks because he can take fewer steps and its less likely that he'll fall on ice. Even so, he walks 8 miles a day.

But even Keist smiled when the sun momentarily appeared from behind clouds.

"When spring comes around, the letter carriers will be doing cartwheels."

Here's advice from Bloomington Postmaster Mark Ford and letter carriers Kim Herberger and Gary Keist on how homeowners can help their carriers this winter:

The Bloomington police and fire departments responded at 12:56 p.m. to East Washington Street between Vale Street and Towanda Avenue/State Street.

A Heyworth man was released from custody Monday on pending methamphetamine charges.

Before the verdict was announced in the Derek Chauvin trial, The Pantagraph asked community leaders about the case. Chauvin has been convicted of murder and manslaughter in the death of George Floyd that stirred worldwide protests.

Keist walks through deep snow Thursday along his route on Sheridan Road in Normal.