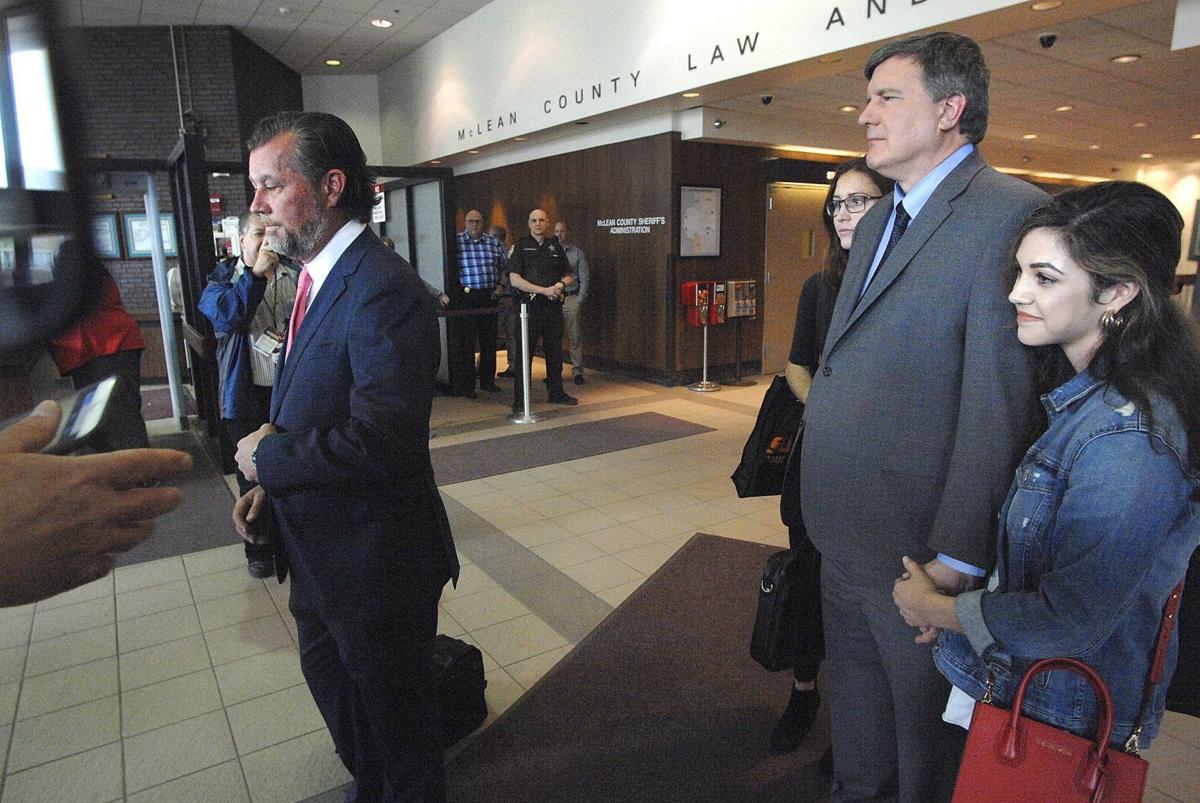 Attorney John Rogers, left, speaks to the media for his client, Kirk Zimmerman, as Zimmerman is flanked by his daughters, Heidi and Rachel, after a McLean County jury acquitted him of murder in the November 2014 shooting death of his ex-wife, Pam, Monday, May 6, 2019. 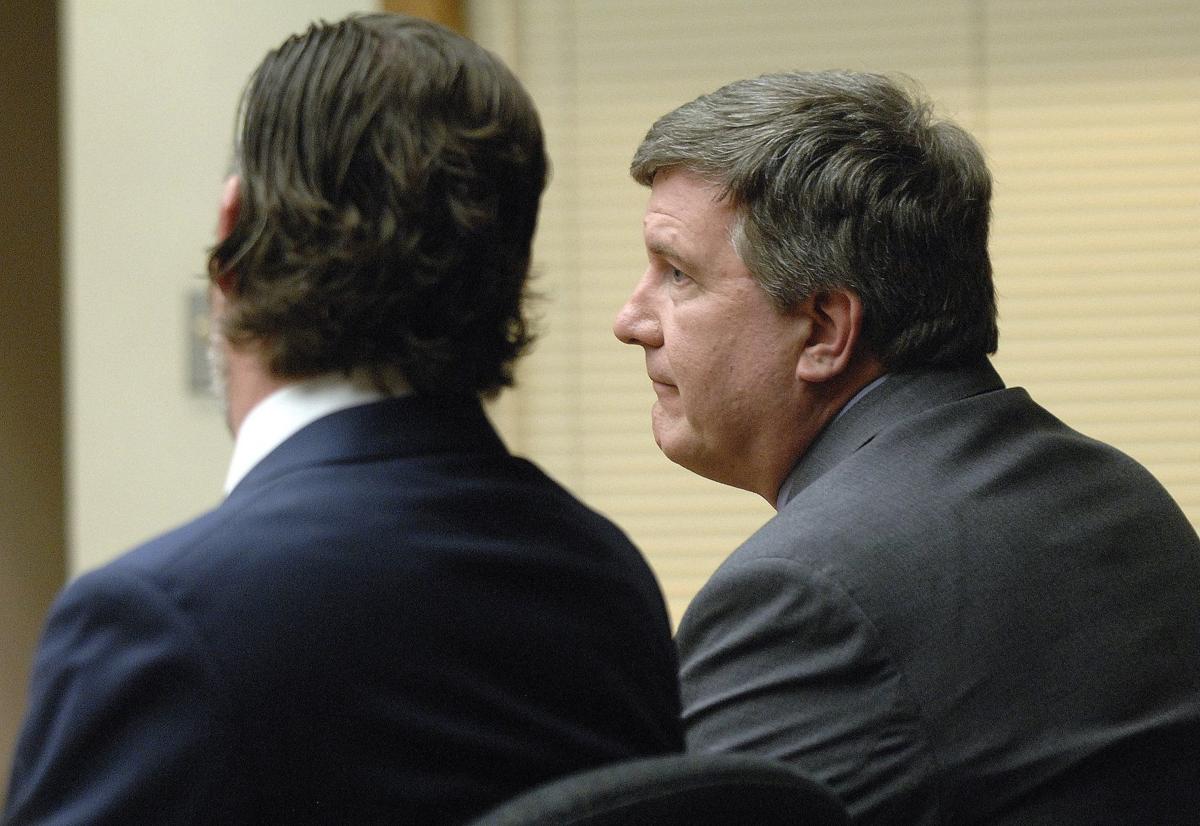 Kirk Zimmerman, right, reacts Monday, May 6, 2019, as the verdict is read by McLean County Judge Scott Drazewski after a jury acquitted him of murdering his ex-wife, Pam, in November 2014. His attorney, John Rogers, is with him.

Zimmerman lawyer: 'We are elated' with jury's decision

BLOOMINGTON — A McLean County jury on Monday acquitted Kirk Zimmerman of killing his ex-wife more than 4½ years ago.

The jury of 10 men and two women returned its verdict about 2:30 p.m. after deliberating about 7.5 hours over parts of three days.

Zimmerman, 61, wiped away tears when the verdict was announced, then hugged his children, lawyer and friends and supporters.

The siblings of shooting victim Pam Zimmerman, 53, met with the state's  attorney's office, then left the courthouse without making a comment. The three prosecutors also exited without commenting on the outcome of the trial that lasted five weeks.

Kirk Zimmerman's lawyer, John Rogers, thanked the jurors and Judge Scott Drazewski for their work on the case. He said Zimmerman and his family were going to enjoy a meal together.

Rogers said he and Zimmerman's supporters were "elated... it's been four long years being accused of a crime he didn't commit."

Zimmerman did not speak to reporters.

But in a statement handed out to the media, he cited flaws in the state's case, adding, "We have seen breakdowns in our local legal system in the (Alan) Beaman case, the (Donald) Whalen case, and now this case. As the trial revealed, I was treated as the only real suspect from the start, at the virtual exclusion of others in Pam's life. This community deserves, and should demand, more from its public servants."

In his comments to the media after the verdict, State's Attorney Don Knapp said he is proud of the work done by First Assistant State's Attorney Brad Rigdon and fellow prosecutors Mary Koll and Aaron Fredrick. The effort by Bloomington police and federal officers was impressive, said Knapp.

When asked his opinion on whether pre-trial decisions by the judge may have impacted the verdict, Knapp responded, "that's probably best left for the jury."

Jurors left the Law and Justice Center without comment.

The jury did not hear certain evidence compiled by the state related to the Zimmermans' divorce, including heated exchanges between the two over money. In hearings before the trial, Drazewski limited the evidence the state could present, including information on Zimmerman's financial condition after his former wife's death in November 2014.

Jurors ended their third day of deliberations Monday without any questions to the judge; several questions were sent on Friday. Zimmerman faced life in prison if convicted.

Instead, the jury sent Kirk Zimmerman home a free man.

The acquittal indicates the jury rejected the state's theory that Zimmerman killed his former wife over about $4,000 in unpaid child support. In order to convict Zimmerman, the panel also had to accept the state's claim that Zimmerman made a trip to Indiana to buy a handgun in the state where access to firearms is far less restrictive than Illinois.

But no weapon was ever found.

The defense challenged the state’s evidence and the Bloomington police investigation leading to Zimmerman’s arrest in July 2015.

“Kirk Zimmerman did not kill Pam Zimmerman over $3,999,” said Rogers in his closing argument last week. Calling the state’s theory of the case a “fabricated motive,” Rogers said the homicide “should continue to be in the unsolved mystery category.”

The defense repeatedly challenged the circumstantial portion of the state's case and the reliability of scientific evidence related to gunshot residue testing and cell tower tracking of Zimmerman's car.

On Friday, jurors asked for access to several videos shown during the trial, including surveillance video from Four Seasons gym where Zimmerman worked out on Nov. 3, 2014 hours before his ex-wife was killed in her east side Bloomington office.

Jurors also asked for copies of a timeline showing Zimmerman’s use of his cellphone and computers and cell tower mapping showing the defendant’s travel in the days and hours surrounding the homicide.

BLOOMINGTON — After a monthlong trial, closing arguments will be offered Thursday in the Kirk Zimmerman murder trial.

Zimmerman lawyer: 'We are elated' with jury's decision

BLOOMINGTON — Kirk Zimmerman entered Courtroom 5A at the McLean County Courthouse on Monday afternoon with a big smile. Wearing a gray suit an…

Donald Whalen Jr., who is awaiting a new trial in his father's 1991 stabbing death, was arrested Tuesday on preliminary charges of unlawful restraint and interference with reporting domestic violence.

Attorney John Rogers, left, speaks to the media for his client, Kirk Zimmerman, as Zimmerman is flanked by his daughters, Heidi and Rachel, after a McLean County jury acquitted him of murder in the November 2014 shooting death of his ex-wife, Pam, Monday, May 6, 2019. 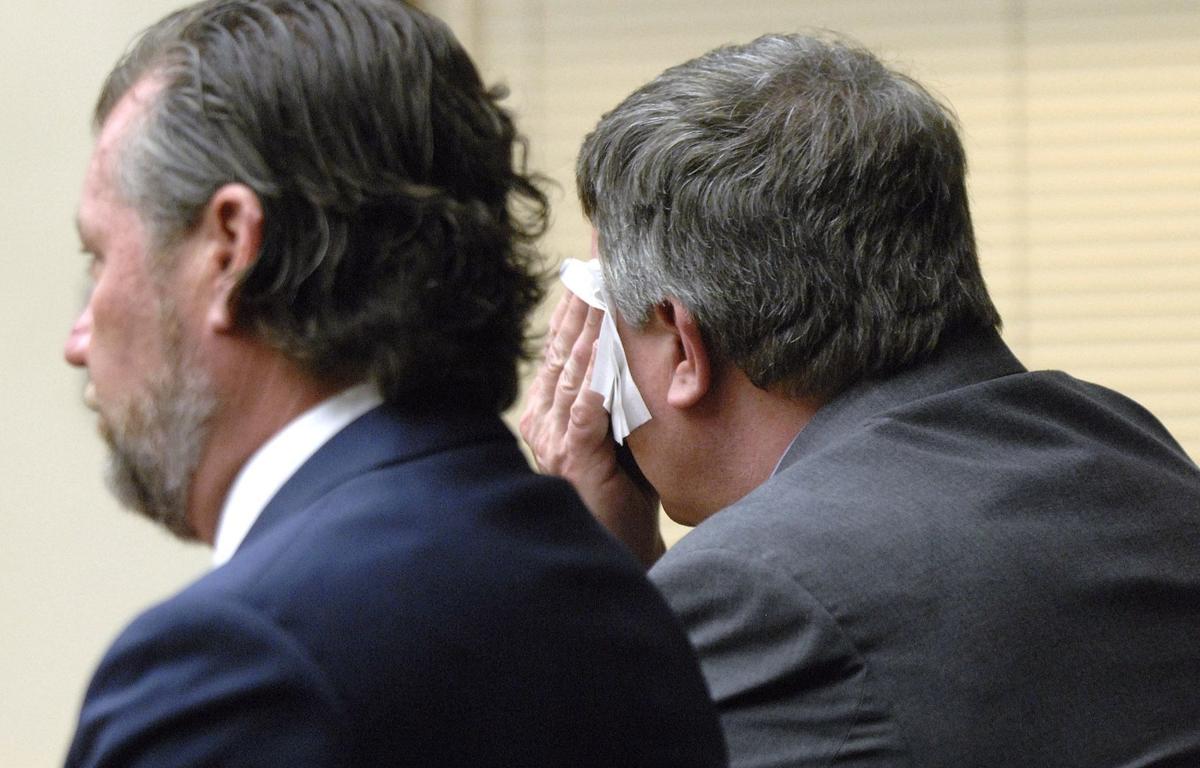 Kirk Zimmerman wiped tears away after a McLean County jury acquitted him on Monday, May 6, 2019, of murdering his ex-wife, Pam, in November 2014.

Kirk Zimmerman, right, reacts Monday, May 6, 2019, as the verdict is read by McLean County Judge Scott Drazewski after a jury acquitted him of murdering his ex-wife, Pam, in November 2014. His attorney, John Rogers, is with him.