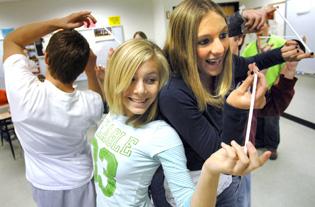 Normal Community West High School freshman Jenna Patrick, left, and Ali Russell, take part in a team building straw challenge exercise in which the group must turn around twice in a circle while holding the straws. The exersise was held Nov. 9 as part of the Freshman Mentoring Program in teacher Berny Chiaro's classroom. 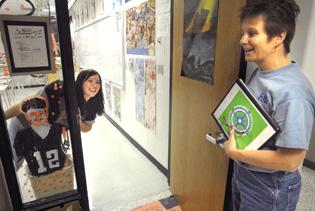 NORMAL — Six students trying to balance a straw while turning around at the same time can teach them how each of their actions affect the other.

But it also fosters laughter, bonding, and symbolizes the success of a new program at Normal Community West High School.

The activity, called the straw challenge, was among the activities led by upperclassmen mentors in a daily, 15-minute Freshmen Mentoring Program — part of a pilot project at Normal West designed to promote successful high school experiences for freshmen.

“We are very excited to introduce this pilot program designed to help incoming freshmen adjust to the academic and social environment of Normal West High School,” said Berny Chiaro, longtime basketball coach at the school and coordinator of the program.

Freshmen and their mentors meet for 15 minutes every day in a homeroom type atmosphere called an advisory. Each day, they have different themes, including small groups, counseling, study/skills, activity day and team day.

“It takes an adult seven days to seven weeks to make an impact on a student’s life, but it takes another student their age or slightly older seven seconds to seven minutes to make a difference. Kids respond to kids,” said Chiaro.

“It is a comprehensive transition program where freshmen learn about expectations, procedures and Normal West tradition,” she said.

“We want them to really be part of the culture,” she said.

So far, it seems to be working.

Katie Aplington, a senior who was chosen from the hundreds nominated as mentors, she was excited to be part of the program she thinks is making a difference.

“It alleviates a lot of negative attention freshmen get. There is less fighting,” she said. “We love to see them,” referring to the freshmen in her advisory.

“I’ve certainly made friends,” added Nate Stark, another mentor. As well as befriending freshmen, he has become good friends with other juniors and seniors in his group as well.

The pilot project is based on a successful program at Stevenson High School in Lincolnshire, a Chicago suburb where it has been successful 17 for years. It is unlike any other mentoring program in Central Illinois because the upperclassmen meet with the freshmen daily.

The program has been in the works for a couple of years.

Last spring an intense search for the upperclassmen mentors was begun. In all, 754 were students were nominated to be mentors. Faculty members narrowed it down to 100, all of whom were interviewed for 50 spots.

"It’s an honor to be chosen. There’s a lot of pride," Chiaro said.

The student mentors were recognized by the school in the spring and had to write a welcome letter to the randomly chosen freshmen, who knew they had support before the first day of school.

The upperclassmen mentors, called FMPs, are clad in bright green shirts with a compass proclaiming Wildcats Encouraging Successful Transitions (West). They are easy to spot when freshmen need assistance, especially finding their way around at the beginning of school.

“I didn’t think it was going to be very fun at first,” said freshman Jenna Patrick of Bloomington. But she learned quickly that the program can be helpful, especially in developing good study skills.

“They teach us how to have Cattitude,” she said with a laugh, pointing to a flamboyant cat poster in the classroom.

The students’ faculty advisor, Jim Rumps, an English teacher said the catch phrase “Cattitude” may sound kind of “cheesy” but the concept is: “It’s a Great Day to be a Wildcat,” symbolizing the school’s mascot.

His saying comes back to haunt him some days — if he gives a test that is too tough, students respond, “Where’s the Cattitude?”

In spite of the levity, Rumps said the program is effective already.

“There is definitely a difference,” he said, noting that normally freshmen are a little intimated, even scared, but most seem more comfortable because they know more people now.

“It guarantees they know 25 people the first day and they see the same people every day,” said Rumps, who hopes the project will be expanded to include all freshmen. “It provides a home base, a sense of belonging.”

For Chiaro, the program “has been as exciting for our faculty as for the freshmen."

"How engaged the kids is what makes me really excited.” she said.

400 - the approximate total of freshmen every year

50 - the number of upper classmen mentors

Normal Community West High School freshman Jenna Patrick, left, and Ali Russell, take part in a team building straw challenge exercise in which the group must turn around twice in a circle while holding the straws. The exersise was held Nov. 9 as part of the Freshman Mentoring Program in teacher Berny Chiaro's classroom.