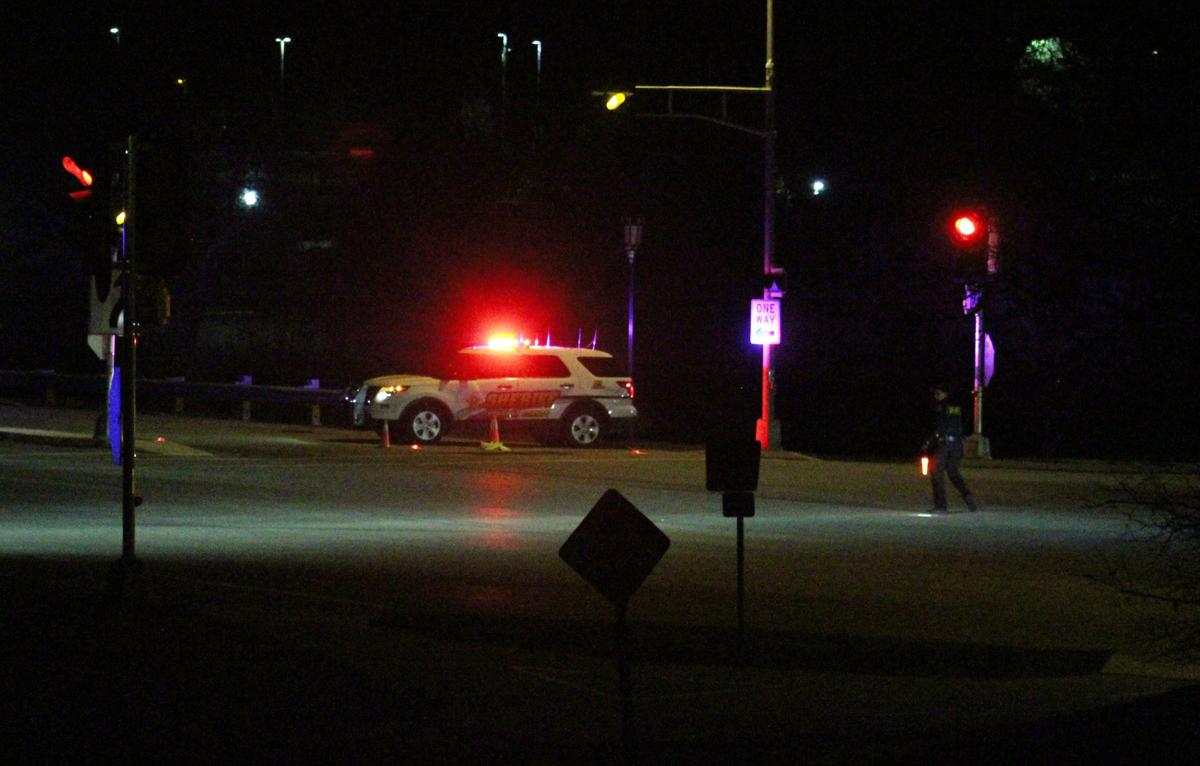 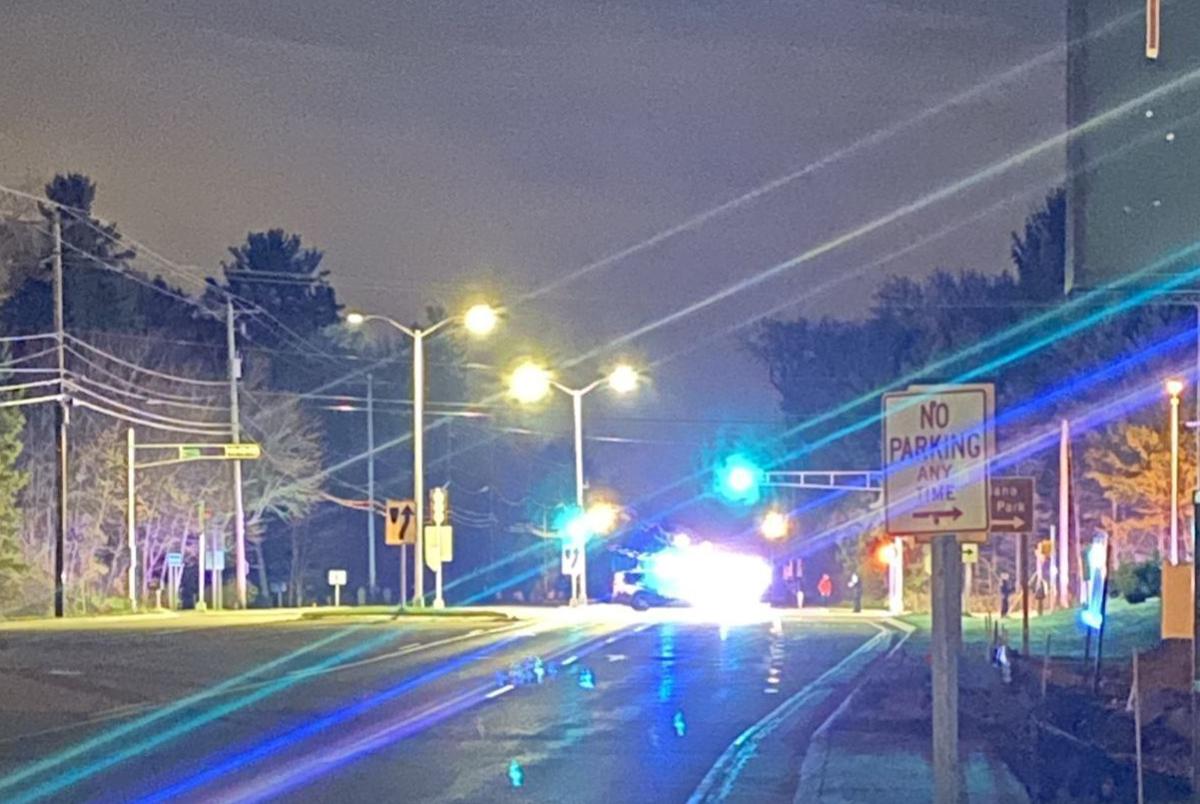 Police form a perimeter near the intersection of Sheridan Road and 12th Street in Kenosha early Sunday after unconfirmed reports of an active shooter situation in the area.

UPDATED 11:30 A.M. SOMERS, Wisconsin — Authorities were still seeking a suspect after three men were killed and two injured in a shooting early Sunday at Somers House Tavern near Kenosha.

According to Kenosha County Sheriff David Beth, there had been some kind of confrontation in the crowded bar, 1548 Sheridan Road, earlier in the night. A man left then returned with a gun and began shooting at about 12:42 a.m.

No one was in custody for the shooting as of later Sunday morning, the sheriff's department said.

“I’m led to believe there was some type of confrontation inside, the management asked that person to leave and then that person came back a short time later and shot people,” Beth said.

One witness said Sunday morning that it appeared there were people exchanging gunfire.

Beth said two men died at the bar. The third man died at a hospital. Beth said two people at the scene had loaded the third victim into a car and had been taking him to the hospital, then flagged down a deputy near Sheridan Road and 36th Street for help. “He passed away,” Beth said.

Two more people were seriously injured. Beth said one of those men had a chest wound.

All of those shot were men, sheriff's Sgt. David Wright said.

The Sheriff’s Department was not releasing information Sunday morning on the identities of the people killed or those injured.

Kenosha activist Porche Bennett-Bey said one of the men killed was her 26-year-old cousin, a Kenosha resident. His name is being withheld pending notification of family members.

"He leaves behind a beautiful baby boy," she said. "All three of them were loving people, always there for people and making people laugh every day."

On Sunday morning, the tavern and the surrounding streets was surrounded by police tape, and the body of one of the men killed lay covered with a white sheet just outside the door of the tavern. A witness said he believed the body of a second victim was on the bar’s fenced patio. Evidence markers were scattered through the parking lot and down 15th Street east of Sheridan Road.

Peter Ploskee, who lives in a house across the street from the bar on the corner of Sheridan and 15th Place, said he woke up to the sound of gunfire.

“I hear gunshots and get up and start walking from my bedroom to the living room. I hear more gunshots and I see people just running in every direction possible. I look out my north facing windows and see two guys kind of jumping around a vehicle shooting at each other, see flash bangs from the gun,” Ploskee said. “Next thing you know cars are going south, cars are going north. People are screaming. I hear someone saying 'he’s shot.' Hear someone saying 'he’s dead.'”

Another neighbor said she was outside when she heard what she thought was fireworks, and then saw police vehicles descending on the neighborhood.

"All of a sudden, I heard a 'pop pop pop,'" said another neighbor, Jacqueline Sieracki, describing what she heard early Sunday. "... Then I heard a woman screaming, and then more of the crowd, and then I heard silence and I thought, 'Something awful must have happened.'"

Several neighbors said they believe someone involved in the shooting ran east down 15th Place and then fled through yards along the lakefront. They said deputies were guarding possible evidence in a yard along the lake.

Somers House is a popular hangout for students from nearby Carthage College, and the college went on lockdown during the shooting according to Wright.

A parent of a Carthage student said on social media that her daughter and friends witnessed the shooting. She did not want to be identified because the suspect is not in custody.

“My daughter and friends were at Somers House when (they) saw a fight turn to gunshots. They think they heard 19 shots,” she said. “(She said), ‘Mom, he shot people right in front of us.’ They escaped the bar and headed back to the dorm for lockdown,” she said in a social media post.

The parent said Carthage sent a message to students and families saying the student counseling center would be open for students Sunday.

Sheridan Road remained closed near the tavern Sunday morning as the investigation continued.

Kenosha Sheriff David Beth said while the suspected shooter is still at large, the public is not believed to be in danger. The suspect apparently knew the victims and targeted them, although it is not clear whether the victims knew him. The shooting happened at Somers House Tavern in Kenosha County after the suspect was asked to leave the bar and then returned and opened fire.

“I’m led to believe there was some type of confrontation inside, the management asked that person to leave and then that person came back a short time later and shot people,” Beth told a Sunday morning news conference.

Beth said five men were shot. “Two died at the scene,” Beth said. The third person was loaded into a car by two other people who were trying to take him to the hospital. “They then went down in front of the old St. Cat’s (a former hospital on the 3500 block of Sheridan Road) and flagged down a deputy. That person then passed away.”

He said two other men were injured. “I believe one has a chest wound,” he said.

“There may be a few other people who were injured who we have not identified yet,” Beth said, saying others who were injured may have run from the bar after the shooting and not yet sought help.

Beth said that bar was crowded at the time of the shooting. Somers House is a popular hangout for students of nearby Carthage College. Wright said that the college went on lockdown after the shooting.

Beth left open the possibility that there was more than one suspect. He said he believed at least one handgun was used.

The road leading up to the tavern remained closed early Sunday as officials investigated the latest in a string of recent mass shootings across the country, including the killings of eight people at a FedEx warehouse in Indianapolis on Thursday. Last month, four people were killed at an office shooting in California, eight people were fatally shot at massage businesses in the Atlanta area, and 10 died in gunfire at a supermarket in Boulder, Colorado. — Kenosha News and Associated Press

3 a.m. An active shooter situation was reported at around 1 a.m. Sunday at or near the Somers House tavern, 1548 Sheridan Road, Kenosha.

As of 2:30 a.m., police officers maintained a radius extending about three blocks south of Somers House.

A report on the Facebook site "Kenosha County Scanner" indicated there were several gunshot victims at Somers House, although those reports could not be immediately confirmed.

Officials at the Kenosha Police Department and Kenosha County Sheriff's Department could not be reached for comment.

An officer on scene said there was an "active shooter," but no details were available. An alert from Incident Page Network stated there was an "initial report of seven victims."

Somers House is a bar popular with Carthage College students.

The state crime lab had been called in, as were law enforcement officers and first responders from throughout southeastern Wisconsin. — Lee Newspapers

WATCH NOW: Video from the scene of the Somers House shooting

Watch now: Scene is quiet a few blocks away from Somers House following active shooter after 3 a.m. near Carthage College

The CDC on Thursday will ease indoor mask-wearing guidance for fully vaccinated people, allowing them to safely stop wearing masks inside in many instances.

Police said a Dunkin' store employee fatally punched a 77-year-old customer in Florida after the employee said the man repeatedly used a racial slur against him.

Masks come off in 'great day for America'; Palestinian families flee Israeli bombardment; WNBA is back

Schools fear dropouts will surge as result of pandemic; parents rush to get shots for kids

Soaring numbers of U.S. students are failing classes or chronically absent. Experts fear the worst. Get the latest as the U.S. grapples with consequences of the COVID-19 pandemic.

House Republicans ousted Rep. Liz Cheney from her post as the chamber's No. 3 GOP leader on Wednesday, punishing her after she repeatedly rebuked former President Donald Trump.

Why are fears of high inflation getting worse? Things to know as prices rise.

Rombauer romped to an upset victory in the Preakness on Saturday, denying Kentucky Derby winner Medina Spirit the chance at a Triple Crown.

The Colonial Pipeline, which provides nearly half the gasoline and diesel consumed by the East Coast, has begun resuming operations, but the process will take several days.

Jerusalem on brink of eruption as clashes escalate; McCarthy says Cheney's ouster is near; deadly birthday party shooting in Colorado. Get caught up.

Police form a perimeter near the intersection of Sheridan Road and 12th Street in Kenosha early Sunday after unconfirmed reports of an active shooter situation in the area. 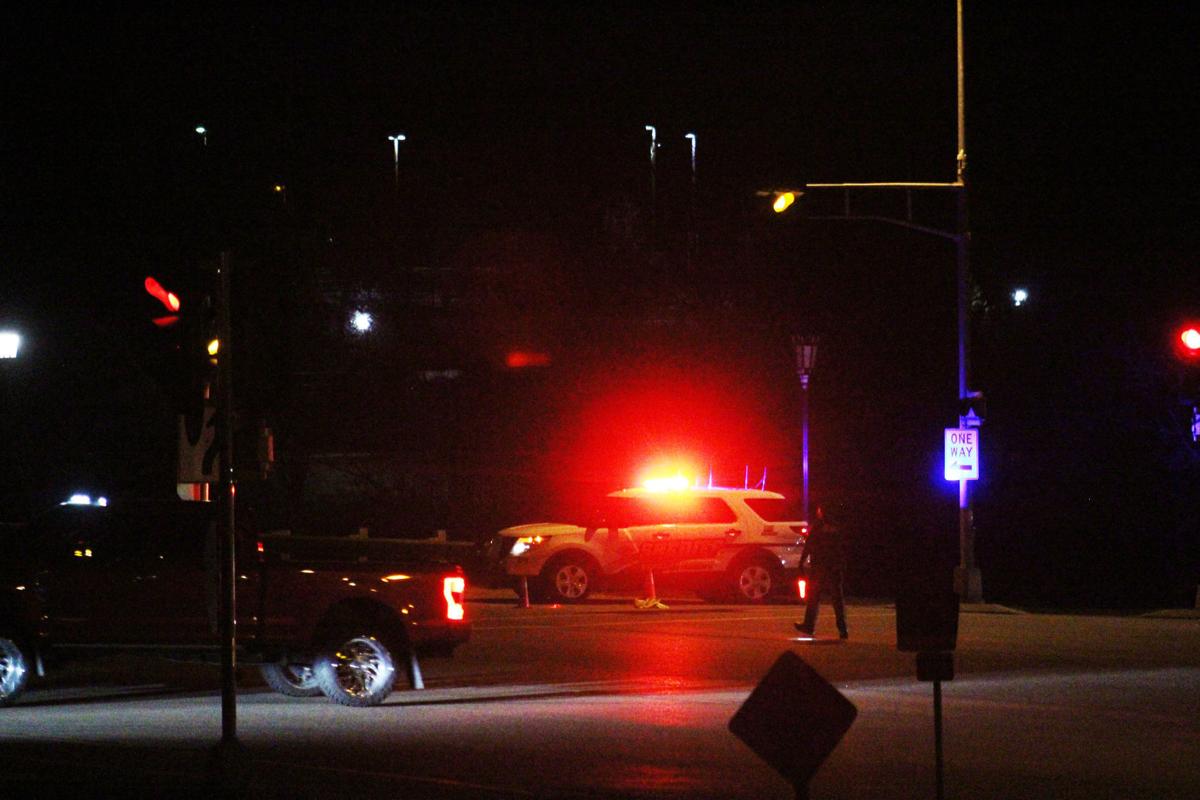