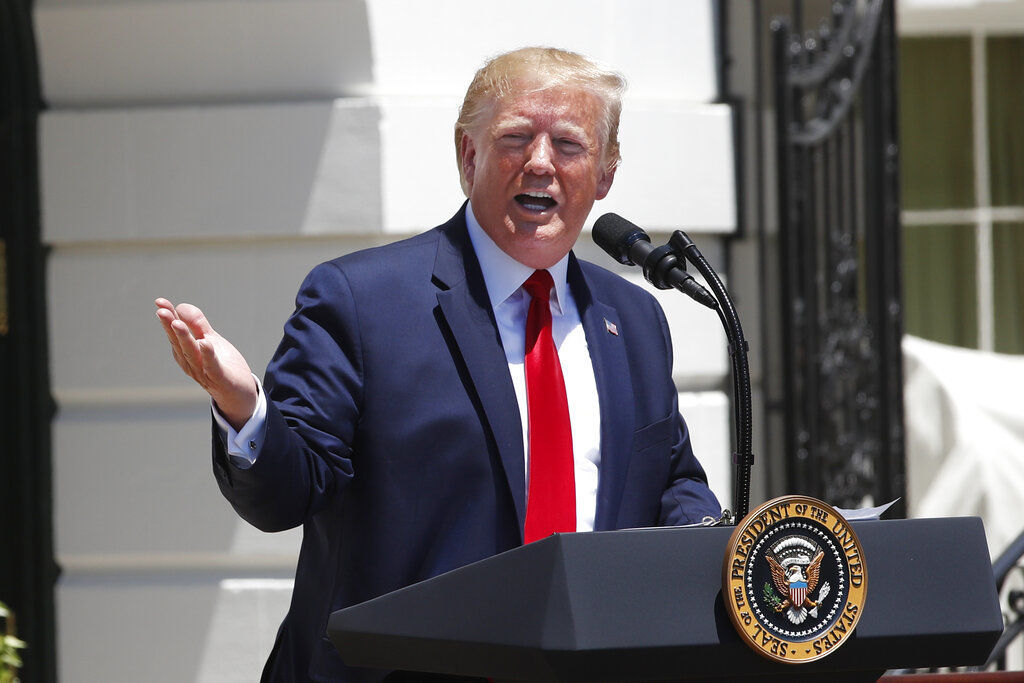 President Donald Trump speaks during a Made in America showcase event on the South Lawn of the White House, Monday, July 15, 2019, in Washington. (AP Photo/Alex Brandon) 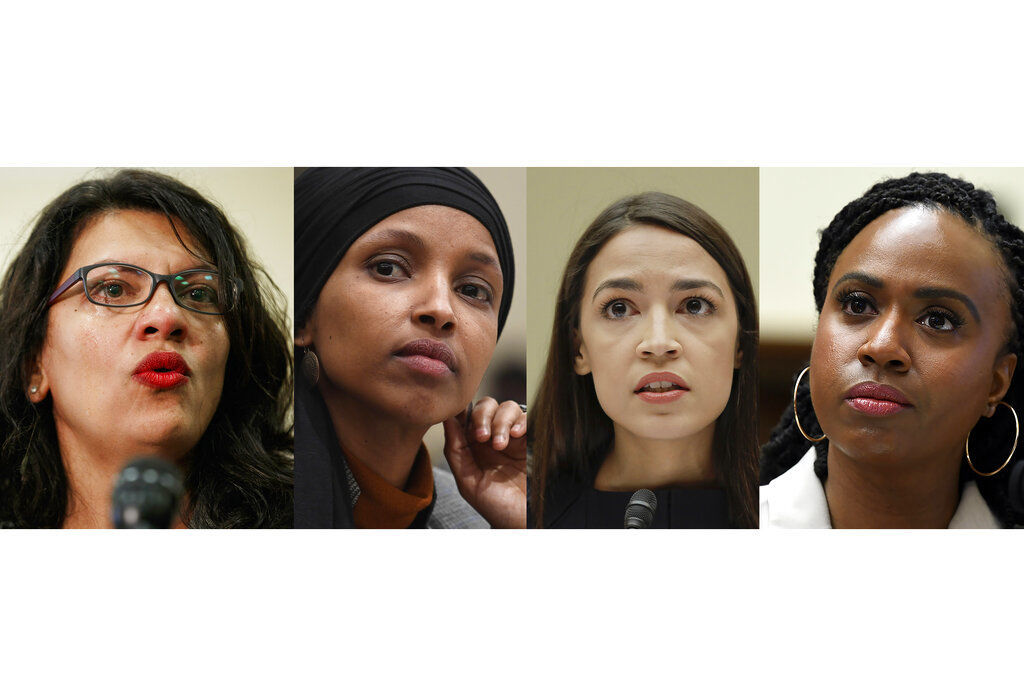 WASHINGTON — Unbowed by criticism of his racist tweets, President Donald Trump is telling members of Congress: "If you hate our country... you can leave."

Trump was responding to furor over his weekend tweets saying that four Democratic congresswomen of color should go back to the "broken and crime infested" countries they came from.

That's despite the fact that all of the women are American citizens and three were born in the U.S.

But Trump says that "a lot of people love" what he said.

House Speaker Nancy Pelosi says the House will vote on a resolution condemning President Donald Trump's tweets telling four Democratic congresswomen of color to "go back" to their countries, even though three were born in the United States.

Pelosi on Monday said Trump "went beyond his own low standards using disgraceful language about members of Congress" and said his xenophobic and "disgusting" comments cannot stand without rebuttal.

Pelosi has called on lawmakers from both major political parties to support the resolution, which will cite former President Ronald Reagan's last speech as president in which he thanked immigrants, adding that if the U.S. "ever closed the door to new Americans, our leadership in the world would soon be lost."

The resolution is sponsored by New Jersey Democratic Rep. Tom Malinowski, who was born in Poland and joined by others born outside the U.S.

Canadian Prime Minister Justin Trudeau says Trump's comments about the congresswomen are "not how we do things in Canada."

Trudeau said Monday "Canadians and indeed people around the world know exactly what I think about those particular comments."

A spokesman for British Prime Minister Theresa May says the prime minister thinks "the language which was used to refer to the women was completely unacceptable."

Republican Sen. Lindsey Graham is advising President Donald Trump to "aim higher" following Trump's incendiary weekend tweets about four Democratic congresswomen. Trump had tweeted that they should go back to the "broken and crime infested" countries they came from, even though all of the women are American citizens and three were born in the U.S.

Graham, a close ally of Trump who golfed with the president over the weekend, offered the advice in an interview with "Fox & Friends" Monday morning.

He said the lawmakers, including Rep. Alexandria Ocasio-Cortez of New York and Rep. Ilhan Omar of Minnesota, "are American citizens" who were "duly elected," and says Trump should "take on their policies" instead of launching personal attacks.

Still, Graham called the members "anti-Semitic" and "anti-American," saying that "AOC and this crowd are a bunch of communists. They hate Israel. They hate our own country."

A relative of U.S. Rep. Rashida Tlaib living in the West Bank says President Donald Trump is an anti-Palestinian racist.

Tlaib, a Michigan Democrat and daughter of Palestinian immigrants, was one of four congresswomen of color who were targeted in Trump's latest Twitter barrage. Trump said the women should go back to the "broken and crime infested" places they came from, ignoring the fact that all are American citizens and three, including Tlaib, were born in the U.S.

Bassam Tlaib, an uncle of the congresswoman, called the president's comments "a racist statement meant to target Rashida because she is from Palestinian roots."

He said it "proves that Trump is anti-Palestinian, anti-Islam and completely biased with Israel."

Key takeaways from the Democratic presidential debate in Iowa

There was a discussion about whether a woman could be president, some sparring over Iraq, and struggles to remember names. A look at some big moments from the Democratic debate in Des Moines, the final forum before the Iowa caucuses.

President Donald Trump's legal team issued a fiery response ahead of opening arguments in his impeachment trial while House Democrats laid out their case.

WASHINGTON (AP) — One by one, House Speaker Nancy Pelosi picked up pens lined up beside her and used them to sign a bit of her name on the impeachment articles against President Donald Trump. Then she handed each signing pen to the assembled chairmen and House managers who will prosecute the case in the Senate.

With lawmakers divided on party lines, Trump can expect acquittal in the Senate, even as new evidence today raises fresh questions about his Ukraine dealings.

WASHINGTON (AP) — In a dramatic procession across the U.S. Capitol, House Democrats carried the formal articles of impeachment against President Donald Trump to the Senate late Wednesday, setting the stage for only the third trial to remove a president in American history.

WASHINGTON (AP) — President Donald Trump’s impeachment trial in the Senate promises to be one of the most heavily scrutinized events in American political history. But the journalists covering the trial are warning that restrictions on media access will cripple their ability to do their job.

2020 Watch: Will impeachment change the primary?

There are just two weeks left until the Iowa caucuses. Here's what we're watching heading into a new week on the 2020 campaign.

FLORENCE, S.C. (AP) — Democratic presidential candidate Pete Buttigieg, who has been criticized for his slow outreach to black and other minority voters, has rearranged his schedule to make room for events in early-voting South Carolina that honor Martin Luther King Jr.

President Donald Trump speaks during a Made in America showcase event on the South Lawn of the White House, Monday, July 15, 2019, in Washington. (AP Photo/Alex Brandon)