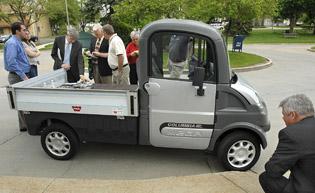 The Town of Normal council members look over The Mega low speed vehicle Monday evening prior to the council meeting at City Hall.(The Pantagraph/LORI ANN COOK-NEISLER) (May 4, 2009) 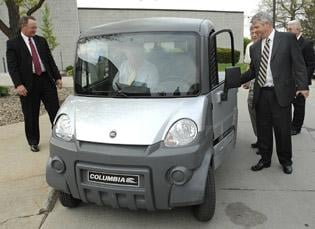 The Town of Normal council members look over The Mega low speed vehicle Monday evening prior to the council meeting at City Hall. Council member Adam Nielsen, right, prepares to take the car for a spin.(The Pantagraph/LORI ANN COOK-NEISLER) (May 4, 2009)
Mary Ann Ford

NORMAL - Electric "neighborhood vehicles" now are legal in Normal. A majority of the City Council approved a new ordinance Monday night allowing them on any streets with a speed limit of 35 mph or less. | Normal OKs move of uptown's Commerce Bank

"It would be great on the golf course or the ISU quad, but I really do think it may pose a safety hazard," said Nielsen. "I can't support this."

Neighborhood vehicles, which are more than golf carts but less that full-sized cars, can't go faster than 35 mph.

Fritzen agreed with Nielsen, saying that because the vehicles look like gasoline-powered vehicles but don't go as fast, they could pose a problem on the roadways.

"It's a safety issue. When you come upon one of these, they look like a regular vehicle. When you realize they're not, you might be too close for comfort," Fritzen said.

Fritzen suggested the council adopt an ordinance for limited use, such as around the university campus.

"It's obviously a forward-thinking vehicle; it's cleaner," said Councilwoman Cheryl Gaines. "But I'm concerned about some roads like Vernon and College (avenues)."

City Manager Mark Peterson said that because of the cost - the "Mega" drop-side truck displayed Monday night at City Hall costs $19,000 - limiting where it could be driven would render a purchase impractical.

Councilman Jason Chambers suggested if neighborhood vehicles were banned from the streets, then perhaps bicycles should be banned for the same reasons.

"You can't see them (bicycles), and they move slow," he said.

Councilman Chuck Scott, who also is executive director of facilities management at ISU, said he was encouraged by the vehicle.

"I'm sold on them," he said. "I think there is a lot of value to this type of technology."

Scott said one ISU department has money available to purchase one of the vehicles but was waiting for the town to pass an ordinance allowing them on public streets.

Jim Sheahan, allied products manager for Wiese Planning & Engineering Inc., the company that brought the model to City Hall, said there's been an "explosion" of interest in the vehicles in the last six months. The company, which has an office in Bloomington, focuses on sales to municipalities and colleges and universities.

The University of Illinois has used similar vehicles for three years. Pontiac has an ordinance allowing them, but Bloomington has not adopted one yet.

The vehicles which now have permission to run on most Normal streets:

• Can use regular household outlets

• Have batteries that last three to five years. A new battery costs $1,000.

• May be driven only be people with insurance and driver's licenses

Watch now: This $5 million playground is coming to Normal

The McLean County Unit 5 school board voted Wednesday to approve a natural playground for Colene Hoose, donated by a long-time Normal resident.

This fully furnished property has a home with two decks, three bedrooms, three bathrooms, a lakeview and it's literally at risk of falling into Lake Michigan. And it still somehow sold two weeks ago. Here's how.

A Bloomington woman was released from custody on drug delivery charges.

A Normal man in McLean County jail custody is charged with possessing contraband in a penal institution.

Council on Monday will also vote to amend a portion of the ordinance related to utility shutoffs.

Four Illinois Republicans representing the party’s past, present and — perhaps — future sat on a panel in Bloomington on Thursday evening, sharing thoughts about state government, politics and where the party stands in relation to those.

The McLean County Museum of History writes a weekly feature on the people, places and artifacts that shaped our local history.

The Normal Police Department is reminding the public to beware of speaking to strangers and entering unknown vehicles Thursday as it addressed a social media post circulating in the community.

Gunman kills 6, then self, at Colorado birthday party

A man opened fire at a birthday party in Colorado, killing six people before killing himself.

The Town of Normal council members look over The Mega low speed vehicle Monday evening prior to the council meeting at City Hall.(The Pantagraph/LORI ANN COOK-NEISLER) (May 4, 2009)

The Town of Normal council members look over The Mega low speed vehicle Monday evening prior to the council meeting at City Hall. Council member Adam Nielsen, right, prepares to take the car for a spin.(The Pantagraph/LORI ANN COOK-NEISLER) (May 4, 2009)
© Copyright 2021 The Pantagraph, 205 N. Main St. Bloomington, IL | Terms of Use | Privacy Policy
Powered by BLOX Content Management System from TownNews.com.
You don't have any notifications.