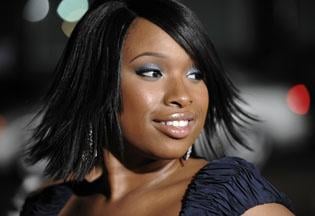 Cast member Jennifer Hudson poses at the premiere of the film "The Secret Life of Bees" at the Academy of Motion Picture Arts and Sciences in Beverly Hills, Calif., on Oct. 6. (AP Photo/Chris Pizzello, file) 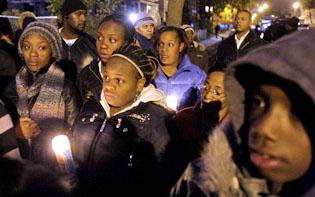 Residents participate in a candlelight vigil for Oscar-winner Jennifer Hudson and her family outside Hudson's mother and brother's home on the Southside of Chicago on Monday. (AP Photo/Charles Rex Arbogast)
Sophia Tareen Associated Press

CHICAGO - With two crime scenes, a suspect in custody and an outraged community, Chicago's top cop said he is confident investigators will find clues to solve the deaths of Oscar winner Jennifer Hudson's mother, brother and nephew. | Video

"I suspect we'll have some evidence that will link us to the killer," said Police Superintendent Jody Weis, adding that surveillance cameras throughout the city may have captured images that would help the investigation.

Hudson was among seven family members and close friends who cried and held hands as they identified 7-year-old Julian King's body from a live image on a television screen at the Cook County Medical Examiner's office Monday afternoon.

The boy was found dead earlier Monday in the back of an SUV, ending a frantic search that began after the shooting deaths of Hudson's mother and brother three days earlier.

Weis said a motive remained unclear. Police have characterized the slayings as "domestic related" and authorities have been questioning Julian's stepfather, who has been estranged from the boy's mother and is being held on a parole violation. No one has been charged in the slayings.

"It wasn't a case of a stranger-type homicide," Weis said.

Julian's body was found early Monday in the rear seat of the SUV, which was parked on the street in a neighborhood of brownstone homes and apartment buildings about 10 miles from his home. The SUV had been the subject of an Amber Alert issued Friday after Hudson's mother and brother were found slain.

The Amber Alert had listed William Balfour, the estranged husband of Julia Hudson, Jennifer's sister, as a suspect in a "double homicide investigation." He is not the boy's father.

Balfour, 27, was taken into custody for questioning Friday after the bodies of Hudson's 57-year-old mother, Darnell Donerson, and 29-year-old brother, Jason Hudson, were found.

Weis said Monday that Balfour, 27, "remains a person of interest."

On Sunday, Balfour was transferred to the Illinois Department of Corrections, where a spokeswoman on Monday declined to discuss his parole violation.

Corrections records show that Balfour spent nearly seven years in prison for attempted murder, vehicular hijacking and possessing a stolen vehicle. He was expected to remain in state custody until the Illinois Prisoner Review Board looked at his case.

Balfour's mother, Michele Balfour, has said Hudson's mother kicked Balfour out of the family home last winter. She denied her son had anything to do with the killings.

It was unclear whether Balfour had an attorney.

Lynette Louden, 47, said she called police about the SUV across the street from her home on Chicago's West Side after her family's Chihuahua started barking at it early Monday. Some neighbors said they hadn't seen the vehicle before Monday, but Louden said it had been there since at least Saturday.

"I only hoped the body wasn't in there," she said. "When they said that it was, I cried."

Weis said police were waiting for the autopsy to determine how long the boy had been dead but estimated the vehicle was parked on the street "a couple of days."

When asked how officers could have missed the SUV during their massive search, Weis noted that Chicago is a big city and that the vehicle was "several miles away from the first crime scene."

Steve Peterson, head of the department's Bureau of Investigative Services, said the search for the boy had been centered farther east based on information they had about where Balfour's current girlfriend lives.

Hudson, 27, who started out on "American Idol" and won an Academy Award for best supporting actress in 2007 for her role in "Dreamgirls," returned to Chicago to be with her family during the weekend. She also had identified the bodies of her mother and brother.

At a candlelight vigil Monday night, hundreds of people gathered outside the Englewood home where the two bodies were found. They sang, held hands and cried in the cold as they contributed to an expanding memorial of stuffed animals, balloons and flowers.

Many said they could not understand how someone could shoot a little boy.

"It pains all of us to know three lives are gone and we don't know why," said Doris Jones, who lives in the neighborhood.

Here's the list of liquor license holders who will appear before the Liquor Commission on Dec. 8.

The driver told police where he was shot in Bloomington, authorities said early Thursday. They're asking for anyone with information to contact police.

Austin R. Doyle, 30, was arrested in February and initially charged with 19 felony counts of sexual crimes against a child under the age of 13.

Nikita Richards steps down as leader of McLean County Democrats

“I’m incredibly grateful for all that we’ve accomplished together,” says Richards.

State officials announced an additional 7,178 new cases of coronavirus disease in Illinois, and an additional 57 deaths of patients diagnosed with COVID-19.

A Streator man faces reckless homicide and two counts of aggravated driving under the influence charges following a fatal vehicle crash that caused the death of a passenger in his vehicle late Saturday night.

The COVID-19 pandemic claimed 446 lives in Illinois over the Thanksgiving holiday weekend while the rate of hospitalizations declined for the first time since the recent surge began in late September.

State officials announced an additional 108 deaths of patients diagnosed with COVID-19 on Saturday, and reported 7,873 new confirmed and probable cases.

Chief adviser to Operation Warp Speed: We could have herd immunity by May 2021

Chief adviser to Operation Warp Speed: We could have herd immunity by May 2021

Pets will soon make a return to the White House

Pets will soon make a return to the White House

Cast member Jennifer Hudson poses at the premiere of the film "The Secret Life of Bees" at the Academy of Motion Picture Arts and Sciences in Beverly Hills, Calif., on Oct. 6. (AP Photo/Chris Pizzello, file)

Residents participate in a candlelight vigil for Oscar-winner Jennifer Hudson and her family outside Hudson's mother and brother's home on the Southside of Chicago on Monday. (AP Photo/Charles Rex Arbogast)
© Copyright 2020 The Pantagraph, 205 N. Main St. Bloomington, IL | Terms of Use | Privacy Policy
Powered by BLOX Content Management System from TownNews.com.
You don't have any notifications.