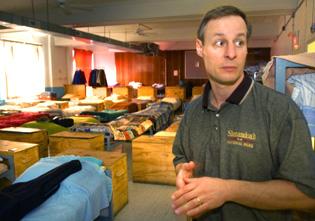 Thomas Fulop, the director of Safe Harbor shelter looked over the men's dormitory at the current location at 212 N. Roosevelt, in this March 2006 photo. 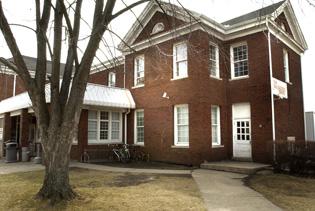 The Salvation Army hopes to replace its aging Safe Harbor shelter with a modern building west of the current location.
M.K. Guetersloh

BLOOMINGTON — Demands on an aging building will prevent The Salvation Army from opening its homeless shelter as a warming center for women while efforts to start construction on a new facility have been delayed.

“We just can’t do it this year,” added Safe Harbor director Tom Fulop, noting even 10 to 20 women are too much for the building.

“We have two stools and one shower for 40 men to use,” Shelbourn said. “That alone is overtaxing our facilities and we are just trying to keep things running until we can get the new shelter built.”

Lead paint at the Roosevelt Avenue building prevents the agency from opening the building to women and children full time.

Before ground can be broken on a new center, the agency needs to raise another $400,000 toward it $2.5 million goal.

So far, $1.4 million has been raised. The $1.8 million is what it will cost to cover the construction of the new shelter; the remaining money will be used for equipment and to set up programs in the building.

The proposed site for the new shelter is near the Salvation Army’s community center at 611 W. Washington St. It will be open to men, women and children.

Shelbourn estimated construction could begin in February with the new shelter ready by fall 2007. Officials had hoped to start construction this summer.

“At this point, the funds dictate how quickly the new building gets built,” Shelbourn said. “But regardless, this shelter will get built. There is no other option because there is a serious need in the community for homeless shelters.”

Donations to the Safe Harbor Capital Campaign can be mailed to The Salvation Army, 611 W. Washington St., Bloomington, IL 61701.

Fourteen establishments within city limits have been fined by the Bloomington Liquor Commission since October for violating state COVID-19 mitigations, resulting in over $6,500 in collected fines.

Man was driving 108 mph when he caused crash that killed family of 3 in northern Illinois, authorities say

Thomas Fulop, the director of Safe Harbor shelter looked over the men's dormitory at the current location at 212 N. Roosevelt, in this March 2006 photo.

The Salvation Army hopes to replace its aging Safe Harbor shelter with a modern building west of the current location.
© Copyright 2021 The Pantagraph, 205 N. Main St. Bloomington, IL | Terms of Use | Privacy Policy
Powered by BLOX Content Management System from TownNews.com.
You don't have any notifications.