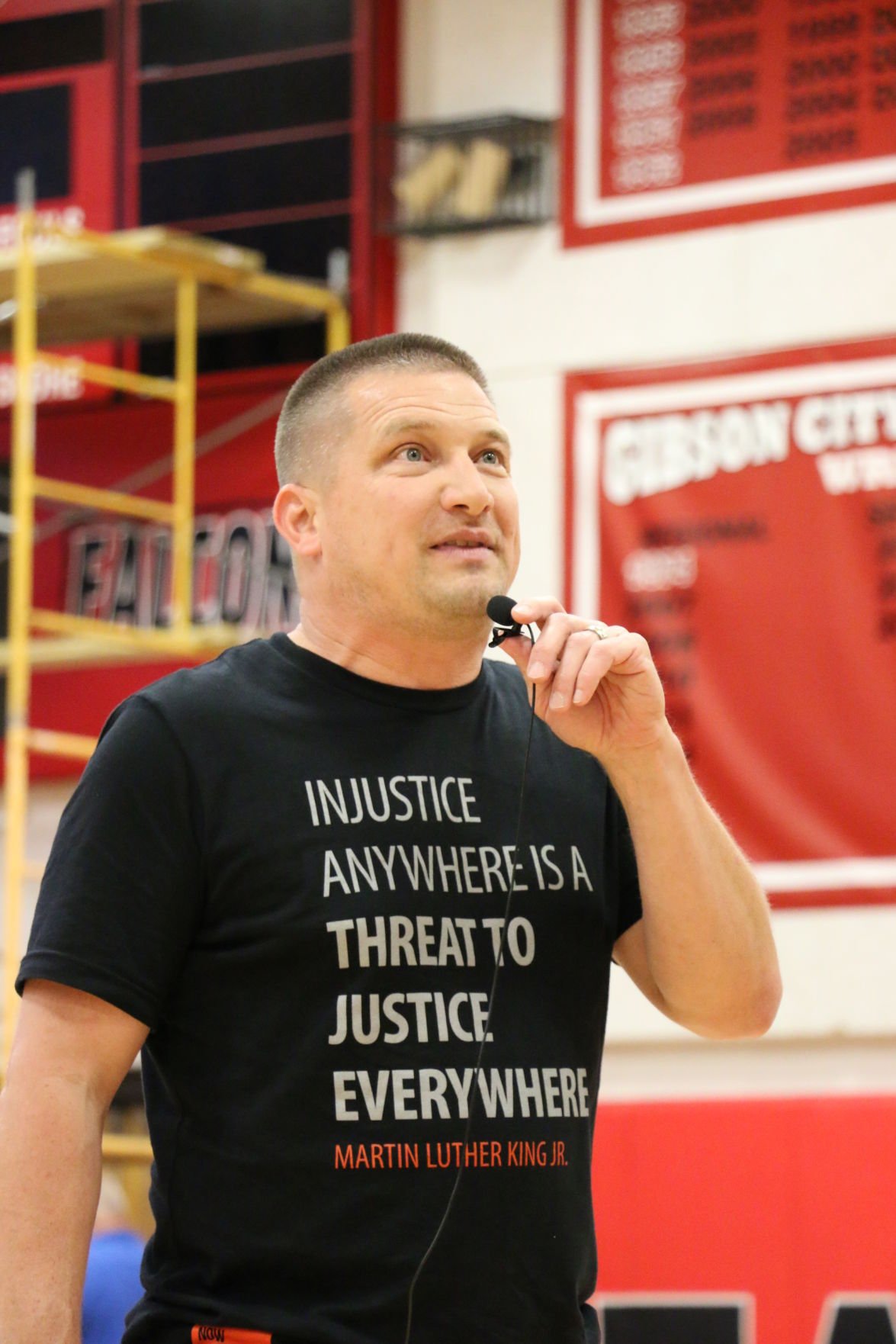 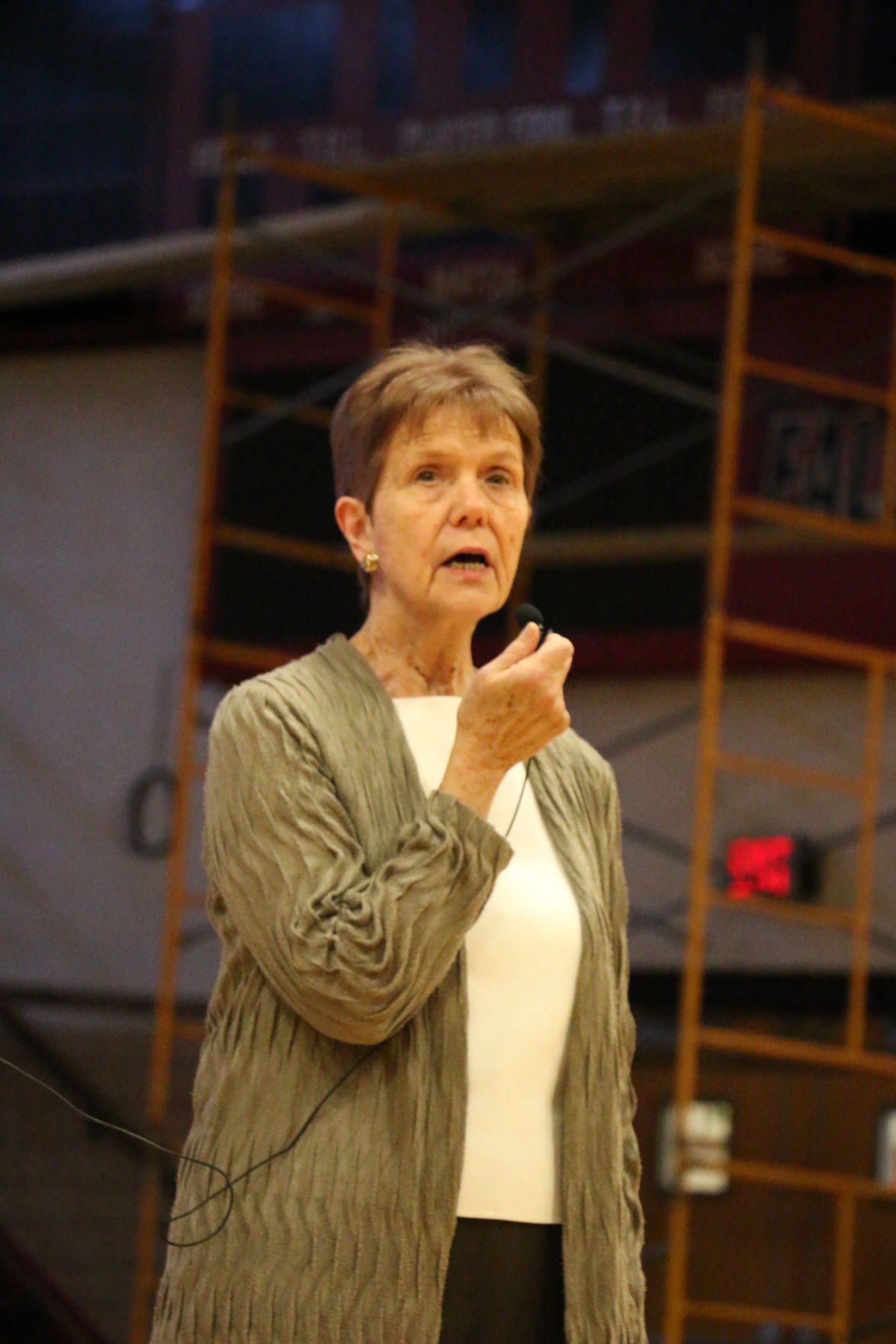 Melanie Warfield tells students gathered last week at an assembly at GCMS High School about how her son fled Africa after being targeted by al-Qaida. 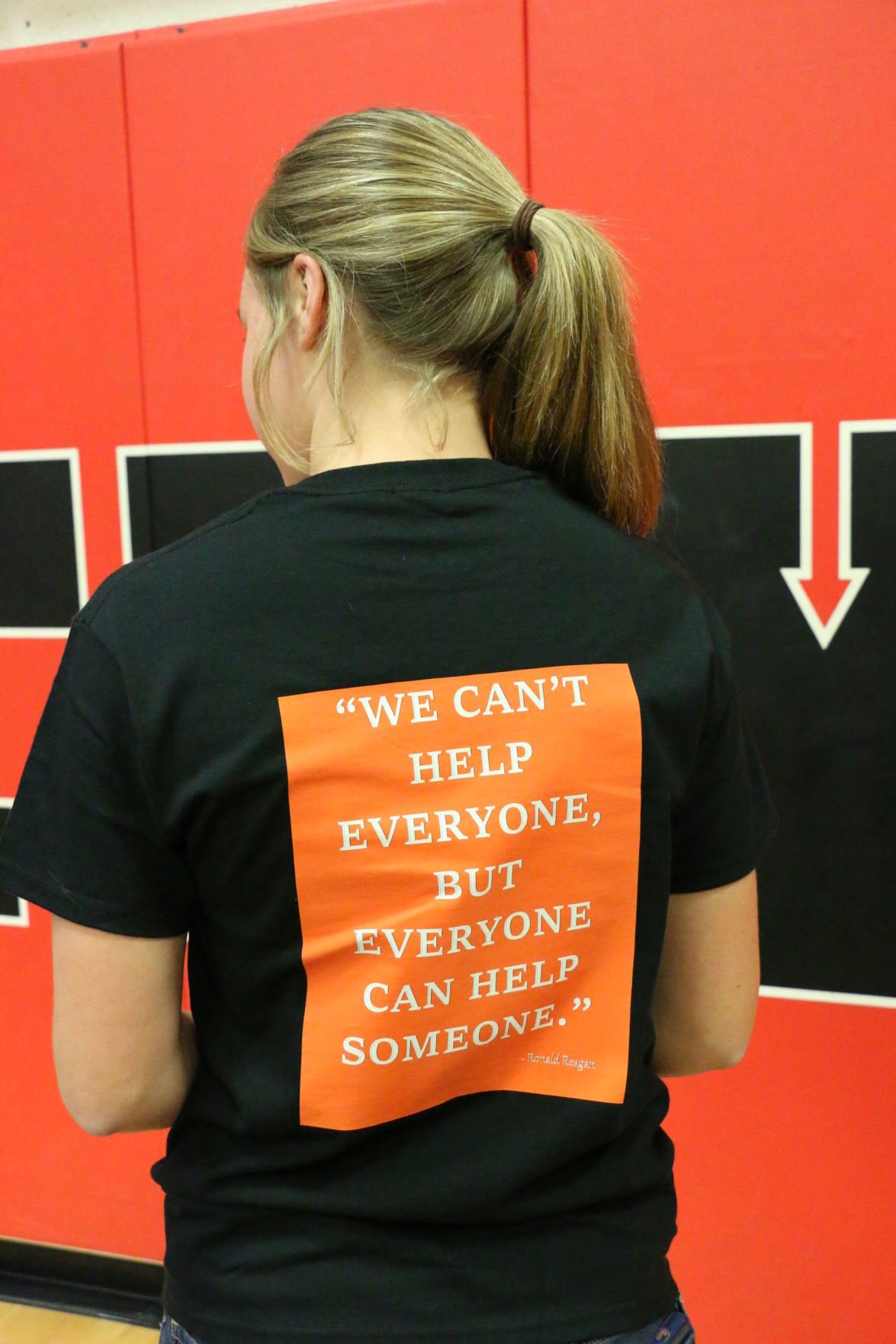 GCMS High School student Bailee Mueller displays the back of a new T-shirt that reads,  “We can’t help everyone, but everyone can help someone.”

Their son, Robb, his wife and three young children were forced to leave Africa, after Robb, a missionary, was targeted by al-Qaida.

A midnight knock on the door came, and embassy officials told her son his family was in “grave danger,” Melanie Warfield told GCMS High School students at an assembly last week.

The family relocated to a safe house and later fled the country. They weren’t allowed to say goodbye to friends or neighbors or take their belongings.

“The biggest thing they had to leave behind wasn’t their possessions or their friends,” said Warfield. “It was a sense of safety and well-being.”

The Warfields were at GCMS to help kick off a fundraising campaign to help those affected by terrorism and violence. The school is teaming up with others in the Heart of Illinois Conference to raise enough money to relocate one family from war-torn Syria.

Warfield said her son and his children went through days, weeks and months of being afraid, even after they were back in the United States. Syrian refugees, though, experience far greater difficulties, she said.

“They’ve lived in fear in a war zone,” said Warfield. “They left homes, families, schools, professions and their country. “

The idea of raising money for a refugee family came from Fieldcrest Principal Bill Lapp, who learned more about the country at a conference he attended in Birmingham.

After returning, he realized his students didn’t know a lot about what was going on in the world. Lapp asked students what they knew about the Islamic State, whose brutality has made headlines worldwide for more than a year.

“As tech savvy and cell phone savvy as they are, they didn’t know what was going on,” Lapp said. “ I realized it’s time to let our kids know what is going on.”

Lapp discovered it takes $25,000 for the organization, Mercury One, to relocate a family of five and provide for them for one year.

“I knew we couldn’t do it ourselves,” said Lapp, so he approached other HOIC principals and asked them to join the effort — and the idea of a “Conference for a Cause” was born.

“It’s $2,000 a school if everyone participates,” he said, noting the idea was well received by other principals.

“Everyone has there own things they raise money for,” said Lapp. “We will see how much money we can raise,” he said.

Fieldcrest and El Paso-Gridley recently teamed up at a football game to begin fundraising.

“It’s charity through rivalry,” Lapp said. “We can compete but raise money together.”

Lapp told the GCMS students there is nothing more important than to stand up for other people. “When you do something charitable for somebody that you know isn’t going to pay you back, that is true love and caring, and that’s what you are doing.”

The marketing class designed T-shirts to make and sell, and additional money will be collected with donation jars. The students also will hold an Avanti’s night during their home boys basketball game against El Paso-Gridley.

“We have a real tendency to look inward,” said Warfield. “But a problem here is a crisis there.”

Senior Mikayla Baillee, who had the winning design for the T-shirt, said she feels fortunate to be able to help one family get out of Syria.

She pointed to the back of the T-shirt, which reads, “We can’t help everyone, but everyone can help someone.”

“I think that’s a perfect quote for this,” she said.

Official: I-40 bridge could be closed for 'months'

Official: I-40 bridge could be closed for 'months'

Watch now: This $5 million playground is coming to Normal

The McLean County Unit 5 school board voted Wednesday to approve a natural playground for Colene Hoose, donated by a long-time Normal resident.

Four Illinois Republicans representing the party’s past, present and — perhaps — future sat on a panel in Bloomington on Thursday evening, sharing thoughts about state government, politics and where the party stands in relation to those.

A Bloomington woman was released from custody on drug delivery charges.

The Normal Police Department is reminding the public to beware of speaking to strangers and entering unknown vehicles Thursday as it addressed a social media post circulating in the community.

The families of more than 65 million children will start receiving enhanced child tax credit monthly payments of up to $300 on July 15, the Biden administration announced Monday.

The vast majority of bridges in McLean County and across the country are structurally sound and motorists are in no danger. But there also those that fall into the lower categories.

This fully furnished property has a home with two decks, three bedrooms, three bathrooms, a lakeview and it's literally at risk of falling into Lake Michigan. And it still somehow sold two weeks ago. Here's how.

Melanie Warfield tells students gathered last week at an assembly at GCMS High School about how her son fled Africa after being targeted by al-Qaida.

GCMS High School student Bailee Mueller displays the back of a new T-shirt that reads,  “We can’t help everyone, but everyone can help someone.”