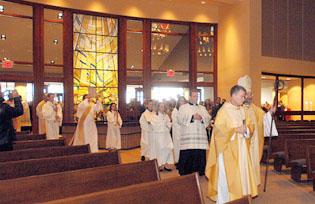 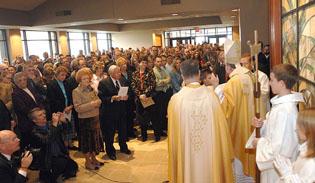 Bishop Daniel Jenky spoke with parishoners prior to opening the doors for the dedication of the new St. Patrick Church of Merna in Bloomington Sunday afternoon, November 5, 2006.(Pantagraph/LORI ANN COOK)
Steve Arney

BLOOMINGTON - Some 1,000 congregants inaugurated their new Christian temple on Sunday in a Catholic rite rich in tradition, thick with incense and celebrated in song at St. Patrick Church of Merna.

But amid the Catholic rituals that dominated the service, Bishop Daniel Jenky challenged the audience to worship and to live the faith with a fuller passion.

The term "hear Mass" has gone out of style with the church's emphasis on greater participation, the bishop noted during his homily. He urged those gathered to "hear Mass" in a new way in this new space, as a spouse hears a spouse, or a parent hears a child, or as Jesus serves his bride, the church.

"And be ready to fall in love with our good God all over again," said Jenky.

The dedication liturgy began at 1 p.m. with Jenky proclaiming in the lobby, "Father Jerry, enter your parish church with your people."

Pastor Jerry Ward, the bishop and eight other clergymen, plus altar boys and altar girls, led a precession that for many marked the first glimpses of the new sanctuary -the bigger part of an $8 million addition to the parish complex at Towanda-Barnes Road and Illinois Route 9.

Thus began an afternoon in which holy water was sprinkled among the gathering, the altar and the corners of the sanctuary were anointed in chrism and men in gold and white robes walked through the aisles with incense - all the while the church remained darkened.

After these ceremonies, the altar candles were lit and all the church lights were raised, revealing the new sacred space in its full glory.

Formed in brick, woods, stained glass and granite, this new church has nearly three times the seating as the sanctuary that was decommissioned with a 9 a.m. Mass. St. Pat's new sanctuary, with 1,100 capacity, replaces a sanctuary that held 400 in pew seating, a more in chairs wherever they could be squeezed into the room, plus overflow seating in the accompanying hallway.

The single stained glass piece from the old sanctuary is at the rear of a new sanctuary rich in art-glass. The old altar stone was placed under the new altar.

New generations have expanded this parish, but those with longevity were given special honor, wearing ribbons and sitting in the first three pews.

One of them, Lucille Kinsella, lives across the street from the church in Merna which was destroyed by a tornado in 1982. She's been in the parish for 66 years. After the tornado, which also damaged her house, the church relocated up the street, on the far east side of Bloomington.

Of the new space, Kinsella said after the service, "It's the most beautiful thing I've ever seen. It's more or less modern, but holy."

The new space still has a transformation to undergo: That of feeling like home.

"I feel like I'm visiting," Ward said after the service. "It feels surreal."

A parish member, Kathleen Lorenz, predicted it would quickly become comfortable once people decided on favorite spots and became acclimated. It's not like going to a different church, she said; "it's our parish community."

The service lasted 2¼hours, and at its ending it already began reverting to Saint Patrick's familiar style.

Ward came to the podium for a brief talk. "Wow. I don't know about you but I'm a little overwhelmed," he said.

The congregations began giving ovations as he talked about those involved: 11 separate ovations, the final two being standing ovations.

Open house for church members and the general public

5:30 p.m. Sunday: Evening prayers and the closing of a week of dedication events

“We are deeply saddened and mourn this tragic loss tonight, the college president said.

Police: 8 dead in shooting at FedEx facility in Indianapolis

Eight people were shot and killed in a late-night shooting at a FedEx facility in Indianapolis, and the shooter killed himself, police said.

Bishop Daniel Jenky spoke with parishoners prior to opening the doors for the dedication of the new St. Patrick Church of Merna in Bloomington Sunday afternoon, November 5, 2006.(Pantagraph/LORI ANN COOK)
© Copyright 2021 The Pantagraph, 205 N. Main St. Bloomington, IL | Terms of Use | Privacy Policy
Powered by BLOX Content Management System from TownNews.com.
You don't have any notifications.