SPRINGFIELD — Illinois officials granted parole on Thursday to an 80-year-old inmate sentenced to life in prison for the 1960 killings of three suburban Chicago women whose brutalized bodies were found in a cave at a state park.

The Illinois Prisoner Review Board voted 9-4 to approve Chester Weger's 24th request for release. He had sought parole since 1972.

Weger was convicted of the murder of Lillian Oetting. He also confessed to killing Oetting’s two companions, Frances Murphy and Mildred Lindquist, at Starved Rock State Park Near Utica, saying he intended to rob them.

Weger later recanted the confession and since has maintained that it was coerced.

The bodies of the three Riverside women were found in March 1960. Shaw Media Illinois reports the case confounded investigators until they determined that the cord used to bind the women’s hands matched twine from a spool in the kitchen of Starved Rock Lodge.

The 21-year-old Weger was a dishwasher at the lodge and had a juvenile record.

Jurors in 1961 declined to sentence him to death, opting for life in prison.

Now Weger is a balding grandfather who no longer resembles the wiry woodsman who on his 22nd birthday was convicted of what was once considered the Midwest’s crime of the century, the pain of which reverberates still.

Weger did not appear at Thursday’s hearing. Attending in support were at least four members of his family. Those appearing in opposition were LaSalle County State’s Attorney Karen Donnelly and Diane Oetting, Lillian Oetting’s granddaughter.

“My grandmother lives on in all of us,” said Diane Oetting, who was born after the murder of Lillian Oetting but fulfills a promise to her deceased father by traveling from her home in Montgomery, Ala., for the parole hearings. “Weger wasn’t able to take that away. … He should serve the sentence that was given to him.”

For decades, Weger was denied parole in unanimous votes by state boards. Then, in 2011, shortly after his 50th anniversary behind bars, the Prisoner Review Board voted 8-5 against release and support has been growing since.

Authorities have described him as a well-behaved inmate at the downstate Pinckneyville prison who has family support and hopes to live in the Chicago area near his two children, who were 1 and 3 in 1961 when he was convicted, and his grandchildren.

SPRINGFIELD — Illinois officials have granted parole to an 80-year-old inmate sentenced to life in prison for the 1960 killings of three suburban Chicago women, whose brutalized bodies were found in a cave at a state park.

Weger won’t be released for at least 90 days per a request from the Illinois Attorney General’s Office. The Chicago Tribune reports that state officials want Weger evaluated under Illinois’ sexually violent persons law.

Weger has denied killing the three Riverside women, whose badly beaten bodies were found in March 1960 in a cave at Starved Rock State Park, near Utica.

Weger was 21 years old and worked as a dishwasher at the state park lodge. Jurors convicted him in 1961.

Months before the 60th anniversary of the Starved Rock State Park murders, in which three suburban Chicago housewives were killed during a daytime hike, the man long imprisoned for the haunting crime is again seeking parole.

This will mark the 24th time Chester Weger has asked for his freedom. A split Illinois Prisoner Review Board rendered a 7-7 vote in each of the last two years, narrowly denying Weger the simple majority needed for his release.

The panel is slated to vote Thursday in Springfield.

Now 80, Weger is a balding grandfather who no longer resembles the wiry woodsman who on his 22nd birthday was convicted of what was once considered the Midwest’s crime of the century, the pain of which reverberates still.

“My grandmother lives on in all of us,” said Diane Oetting, who was born after the murder of Lillian Oetting but fulfills a promise to her deceased father by traveling from her home in Montgomery, Alabama, for the parole hearings. “Weger wasn’t able to take that away. … He should serve the sentence that was given to him.”

As he did during his trial, Weger maintains his innocence. He long ago recanted his detailed confession and reenactment at the crime scene and alleges he was framed by police detectives who were under pressure to make an arrest.

Authorities have described him as a well-behaved inmate at the downstate Pinckneyville prison who has family support and hopes to live in the Chicago area near his two children, who were 1 and 3 in 1961 when he was convicted, and his grandchildren.

But, citing the horrific nature of the crime and Weger’s lack of remorse, the board has denied him parole nearly two dozen times, beginning in 1972.

“I just hope and pray they let him out,” said Weger’s younger sister, Mary Pruett, 77, of Smithville, Missouri. “The cruelty of what happened to (the victims), it really blows my mind. … I know my brother. That’s just not him. It doesn’t fit." 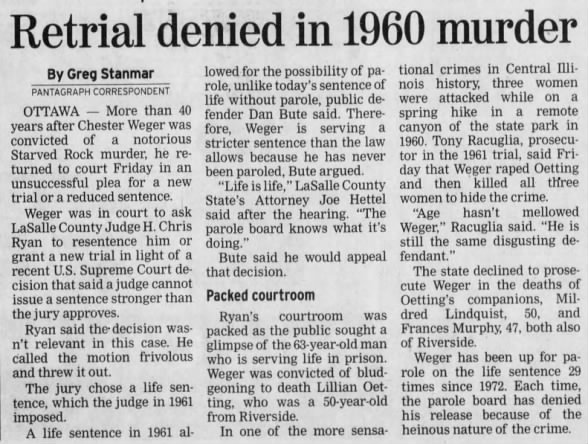 Since last year’s deadlocked decision, three of the seven board members who opposed Weger’s parole have left the board. And the trial’s lead prosecutor, Anthony Raccuglia, who long urged the board to keep Weger behind bars, died May 18 at 85.

Weger was convicted and sentenced to life for the fatal beating of Lillian Oetting, 50, in March 1960 at the scenic park near Utica. Her remains were found in St. Louis Canyon along with the brutalized bodies of Frances Murphy, 47, and Mildred Lindquist, 50, all of Riverside.

The three friends were on a short vacation to escape the winter doldrums when, within hours of their arrival, they were attacked during a hike in the canyon, a popular attraction framed by a scenic waterfall and 100-foot rock walls.

Prosecutors argued at trial that Weger, who was working that day as a lodge dishwasher and who had fished and hiked in the park most of his life, killed the women with a frozen tree branch during a botched robbery attempt. Each was bound with twine similar to that used in the lodge’s kitchen and bludgeoned to death, having injuries consistent with more than 100 blows.

Weger was convicted only in Oetting’s murder. Prosecutors, citing Weger’s life sentence, opted against trying him for the other two women’s deaths and an unrelated 1959 rape in a nearby state park that Weger also denies committing.

Raccuglia was widely believed to be the last surviving participant in the Starved Rock trial other than Weger himself.

Earlier this week, however, the Tribune located a woman who in 1961 was the jury’s youngest member. She recently celebrated her 95th birthday. After all these years, the juror said she still is frightened, and her family asked that her name not be published to protect her privacy.

“I wouldn’t think he would even want to get paroled,” she said. “He’s getting three meals and a bed and has nothing to worry about.”

She recalled many details of her six weeks of jury duty but said she rarely thinks about it today. “I did my duty," she said. "I served. I did what I thought was right and never thought about it again.”

The juror, convinced of Weger’s guilt, said “everything added up."

She said most of the panel supported a death sentence but settled on the life prison term because of a lone holdout member. The woman said she opposes Weger’s parole.

“I think killing three women does deserve a life sentence,” she said.

Nearly six decades later, conspiracy theories and morbid fascination still surround the case. The murders occurred before modern DNA testing and other forensic advances, and Weger has offered various alibis over the years. His later request for genetic tests on hair found on the victims and blood on his fringed leather coat was stymied in state court in 2004 after it turned out the items had not been properly preserved.

In 2007, then-Gov. Rod Blagojevich denied Weger’s request to either pardon him or commute his sentence to time served. 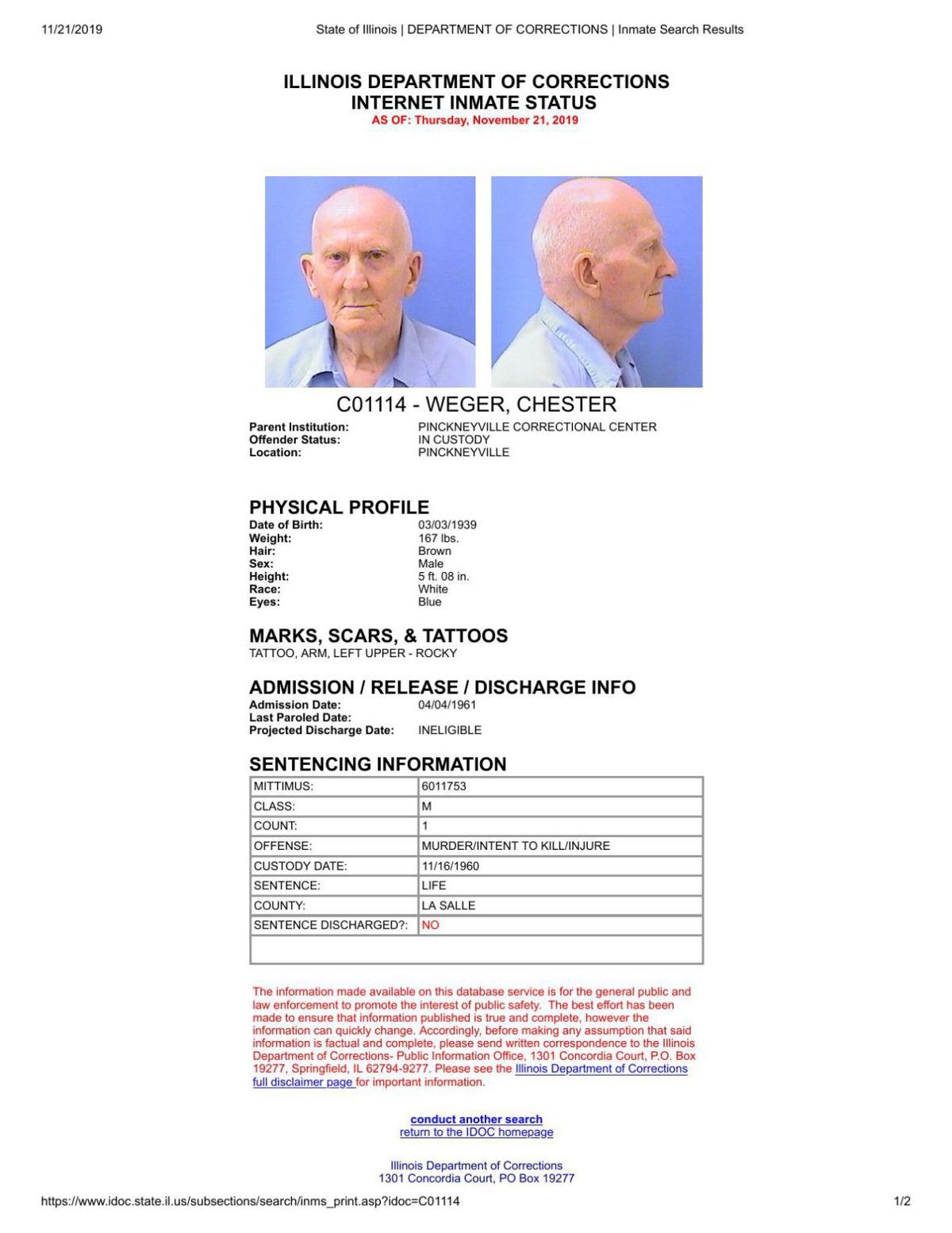 Another juror, who died two years ago at age 93, told the Tribune in late 2016 that she regretted the guilty verdict. She found Weger’s confession implausible and the idea unlikely that Weger, standing 5 feet 8 inches, could overpower three women. She identified herself as the holdout juror and said she gave in to the will of the rest of the panel.

Besides the parole efforts, Weger’s attorneys said they are researching other post-conviction possibilities, citing the improperly preserved evidence and other issues.

“The arrest, interrogations and jury trial included many tactics now banned by the U.S. Supreme Court,” attorney Celeste Stack said. “He received no Miranda warnings, … he was arrested with no probable cause and he was denied evidence that was beneficial to his trial defense. His case would not make it into the courthouse today.”

Weger, who went for years without garnering a single vote until about eight years ago, will not be present at Thursday’s parole hearing. Instead, per board procedure, a member interviewed him this year in prison and wrote a report for the proceeding.

After last year’s hearing, Diane Oetting said she visited Starved Rock and hiked the trail where her grandmother was killed. It was cold; the path’s bridges were icy. As a passersby approached, Oetting said an uneasy feeling came over her, and she imagined walking in her grandmother’s footsteps.

“They were trapped,” she said, referring to the canyon’s dead-end trail. “There was absolutely no way out for them except to pass him. It was just kind of overwhelming.”

SPRINGFIELD — In a dramatic shift following a closed session, the state parole board has denied Chester Weger’s 18th plea for freedom after he… 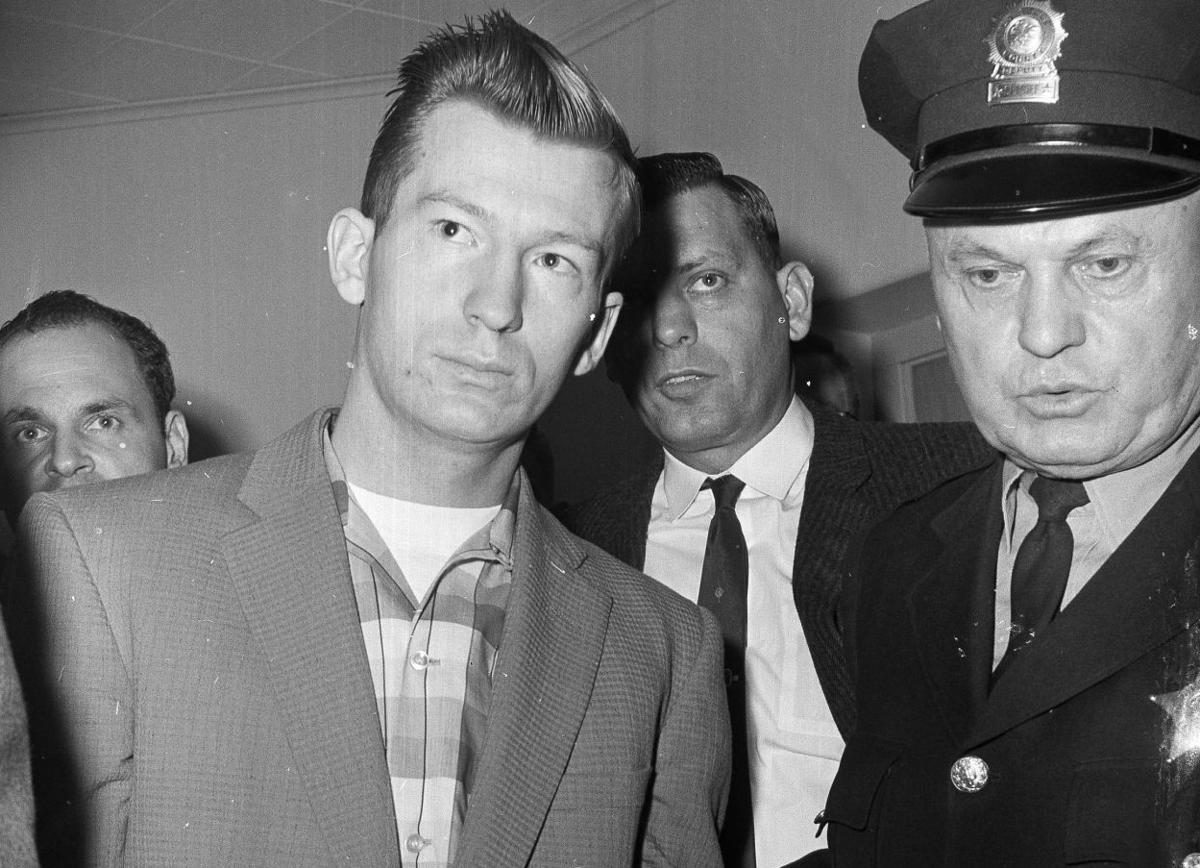 In this March 3, 1961, file photo, Chester Weger, left, is shown after he was convicted in the 1960 murder of Lillian Oetting at Starved Rock State Park, one of three women found murdered there. Illinois officials have again denied parole to the 79-year-old inmate sentenced to life in prison for the 1960 killings. The Illinois Prisoner Review Board voted 7-7 Thursday, Nov. 29, on Weger's request, leaving him short of the needed majority vote for his release. 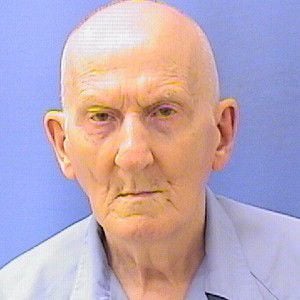