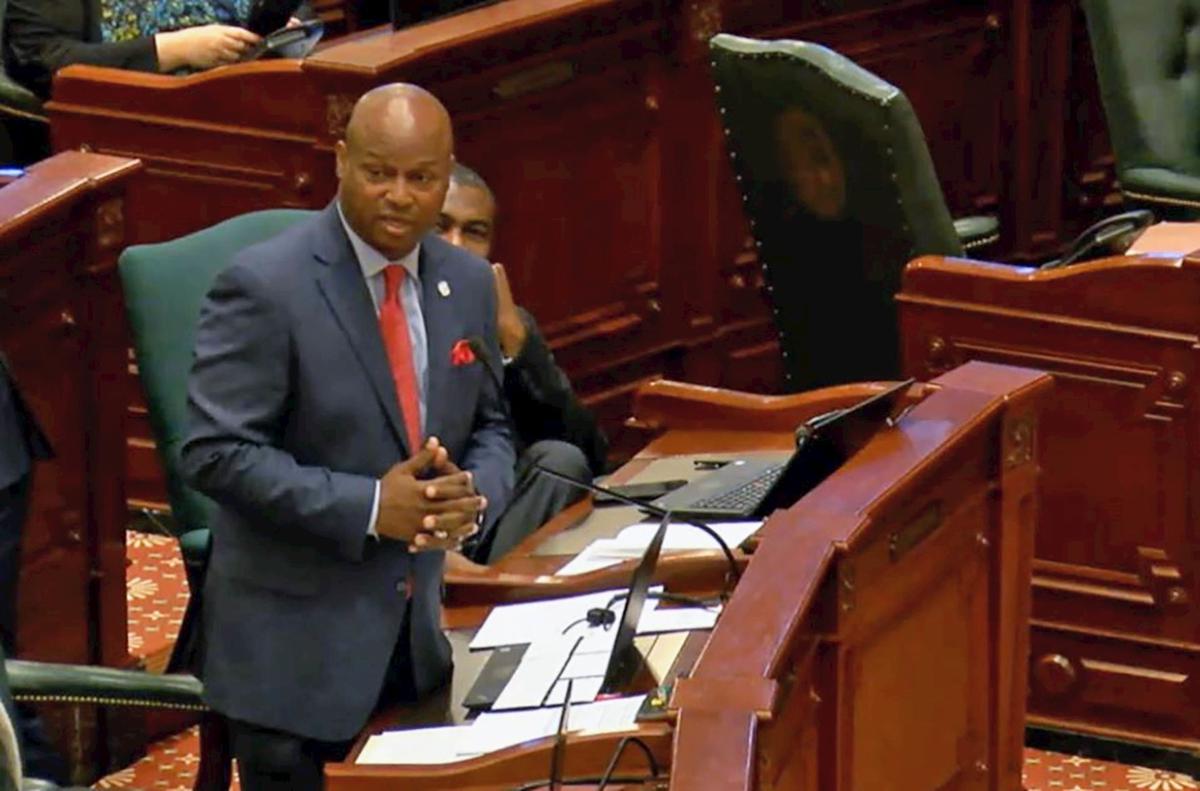 Rep. Emanuel “Chris” Welch, D-Hillside, speaks on the Senate floor in October 2019 at the Capitol in Springfield. 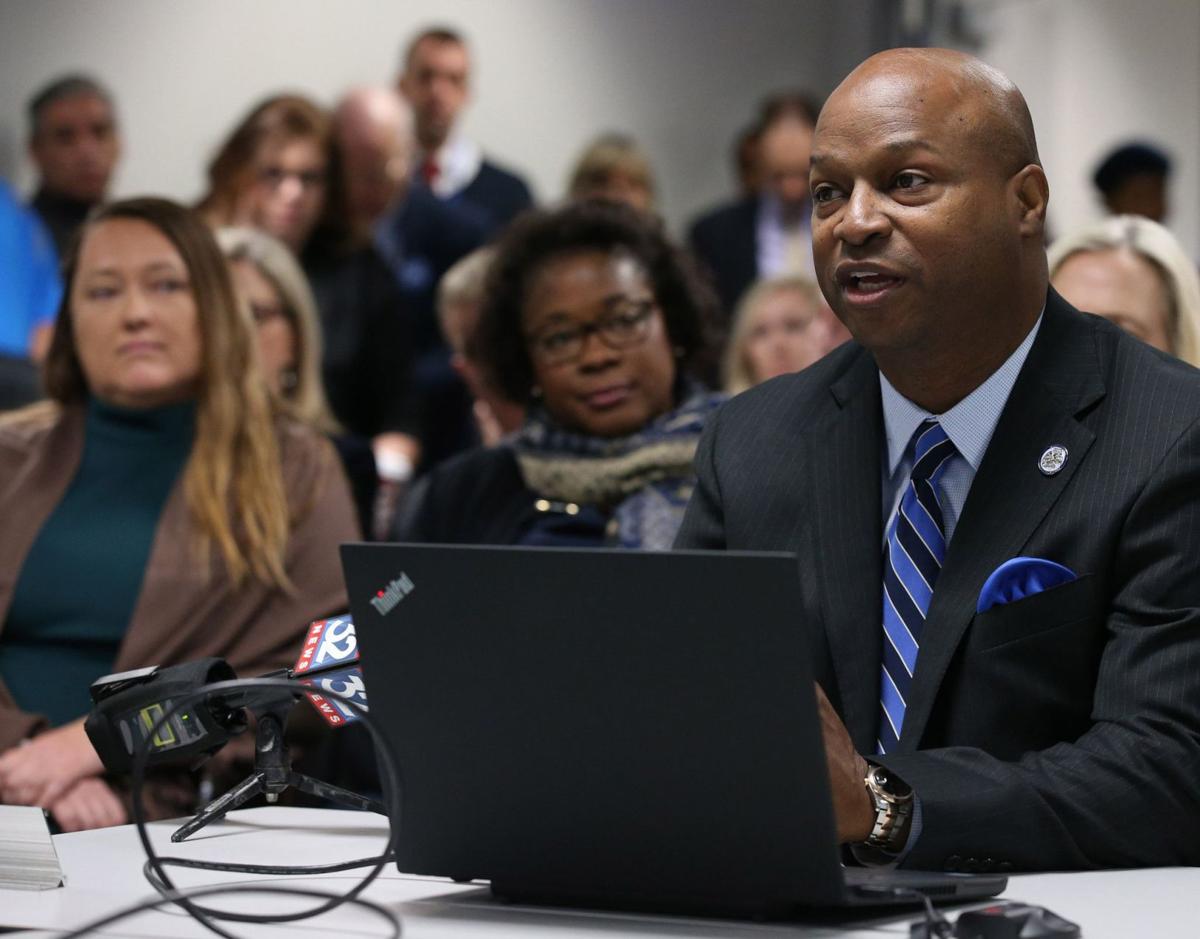 During public comments, state Rep. Emanuel "Chris" Welch addresses the issues concerning seclusion in Chicago Public Schools during a standing room only meeting of the Illinois State Board of Education at the Thompson Center in Chicago on Nov. 22, 2019.

State Rep. Emanuel “Chris” Welch is poised to become Illinois’ first Black speaker of the House Wednesday, as Democrats prepared to reject scandal-plagued Michael Madigan and end the Southwest Side Democrat’s decadeslong reign as the undisputed power in Illinois politics.

Welch, of west suburban Hillside, gained the 60 votes he needed from the incoming 73-member majority Democratic caucus after making a final agreement Wednesday morning with his only remaining challenger, state Rep. Jay Hoffman of Swansea in southwestern Illinois. Hoffman, currently an assistant majority leader, said he will keep a leadership post under Welch.

Welch’s job is now to chart a new future for the chamber’s Democrats after nearly four decades of Madigan’s almost single-handed control of both the party and state agendas.

With the formal vote for speaker to take place on the floor of the Bank of Springfield Center later Wednesday, the state enters a new political age with a diverse Democratic caucus that will try to shed the negative baggage that it has carried in recent years in backing Madigan’s leadership.

Madigan, 78, has been speaker for all but two of the last 38 years, giving up the gavel for two years in the mid-1990s when Republicans briefly held control of the chamber. He was first seated in the House 50 years ago this month.

Madigan says it's "been the honor of a lifetime to help bring people of different experiences and backgrounds together to serve our state ... It is my sincere hope today that the caucus I leave to (Welch) and to all who will serve alongside him is stronger than when I began. pic.twitter.com/aSTJ4CvI0J

Welch entered the House eight years ago, and his visibility has grown each year since. Most recently, he served as chairman of the powerful House Executive Committee — the panel which Madigan tightly controlled to oversee critical and controversial legislation.

A Madigan ally, Welch also chaired a special House investigating committee formed to look into Madigan’s actions after he was implicated in July in a federal bribery scandal involving Commonwealth Edison. The utility agreed to pay a $200 million fine and cooperate with authorities after acknowledging it had engaged in a scheme to win Madigan’s favor by offering jobs and contracts to his top allies.

Madigan has not been charged and has said he had no knowledge of the scheme. His top confidante, former lawmaker and lobbyist Michael McClain, and three others were recently indicted in the investigation. They all have pled not guilty.

Welch’s chairmanship of the panel ended abruptly with no findings — a point Republicans have raised in contending that the new speaker will continue to do Madigan’s bidding. Members of the Black Caucus said they resented such criticism.

Welch is the first Black to serve as speaker of the House. Illinois has had two African Americans serve as state Senate president — Cecil Partee in 1975 and Emil Jones Jr. in 2003.

Welch’s entry as one of the “Four Tops,” the group of partisan leaders of the House and Senate, comes with some controversy.

A 2002 police report indicates that Hillside officers were called to Welch’s home and an ex-girlfriend told them that Welch slammed her head into a kitchen countertop numerous times after she called him “a loser.” The woman did not press charges after talking it over with a relative of Welch’s, the report states.

Welch also faced a 2010 federal lawsuit for sexual harassment and retaliation in which a different woman alleged she lost her job at Proviso Township High School District High School because she broke up with him while he was president of the school board. Records show settlement talks had started in the wrongful termination case when a motion was filed to dismiss the matter.

Welch referred questions to a spokesperson, who on Tuesday issued a statement.

“This verbal argument occurred nearly two decades ago,” Welch said of the 2002 police report. “I will be honest that I have reconciled with the individual since that night.”

Welch sought to blame Republicans for the questions about his past. “At no other occasion have these events been brought up and I firmly believe my Republican colleagues are threatened by the potential growth of my profile,” he wrote.

Welch’s candidacy for speaker emerged in concert with Madigan’s decision to suspend his campaign for reelection, but not to withdraw from the race, after a closed-door caucus Sunday found him nine votes shy of the needed votes for reelection.

Madigan found his vaunted decades-long power initially weakened when his top governmental and political aides were caught up in a sexual harassment scandal two years ago.

Being implicated in the ComEd bribery scandal added to years of attacks that Republicans had heaped on Madigan, particularly in expensive advertising paid by wealthy one-term Republican Gov. Bruce Rauner, who was defeated by Democratic Gov. J.B. Pritzker in 2018.

Pritzker blamed the November loss of his top agenda item, a graduated-rate income tax, on the negative campaign waged by opponents warning of distrust of Springfield, with Madigan a prime example. U.S. Sen. Dick Durbin of Springfield blamed Madigan for the loss of a central Illinois congressional seat. And a Democratic state Supreme Court justice also lost retention after opponents linked him to Madigan.

In the meantime, rank-and-file Democrats and Democratic legislative candidates said that before they were able to offer up their agenda, voters demanded to know how they would vote on Madigan’s speakership.

In the end, for Democrats, Madigan had become more than a distraction and was a detriment.

It was unclear if Madigan would continue to serve as a regular member of the House, though some of his supportive colleagues had their doubts. It also was not known if he would continue as state Democratic chairman, a post he has held since 1998.

Republican leadership offered harsh criticisms for their Democratic counterparts Tuesday as the Illinois General Assembly neared the end of its lame duck session.

One day after state House Speaker Michael Madigan, D-Chicago, announced a suspension – but not a withdrawal – of his campaign for another term as speaker, a state representative who has been accused of being a staunch Madigan protector has launched a bid for the post.

Scandal-plagued Speaker Michael Madigan on Monday suspended his bid to keep running the Illinois House, even as he left open the possibility he could reemerge if Democrats can’t agree on a replacement.

Rep. Emanuel "Chris" Welch, D-Hillside, will be the next speaker of the Illinois House of Representatives after days of closed-door meetings w…

Michael Madigan, who has been speaker for all but two years since 1983, issued a statement congratulating Rep. Emanuel "Chris" Welch, D-Hillside, as "speaker-elect" minutes before lawmakers were set to make the vote official.

“Today will be the last time I talk about us as Democrats or Republicans because I want to talk about us being united,” Rep. Emanuel “Chris” Welch said.

Rep. Emanuel “Chris” Welch, D-Hillside, speaks on the Senate floor in October 2019 at the Capitol in Springfield. 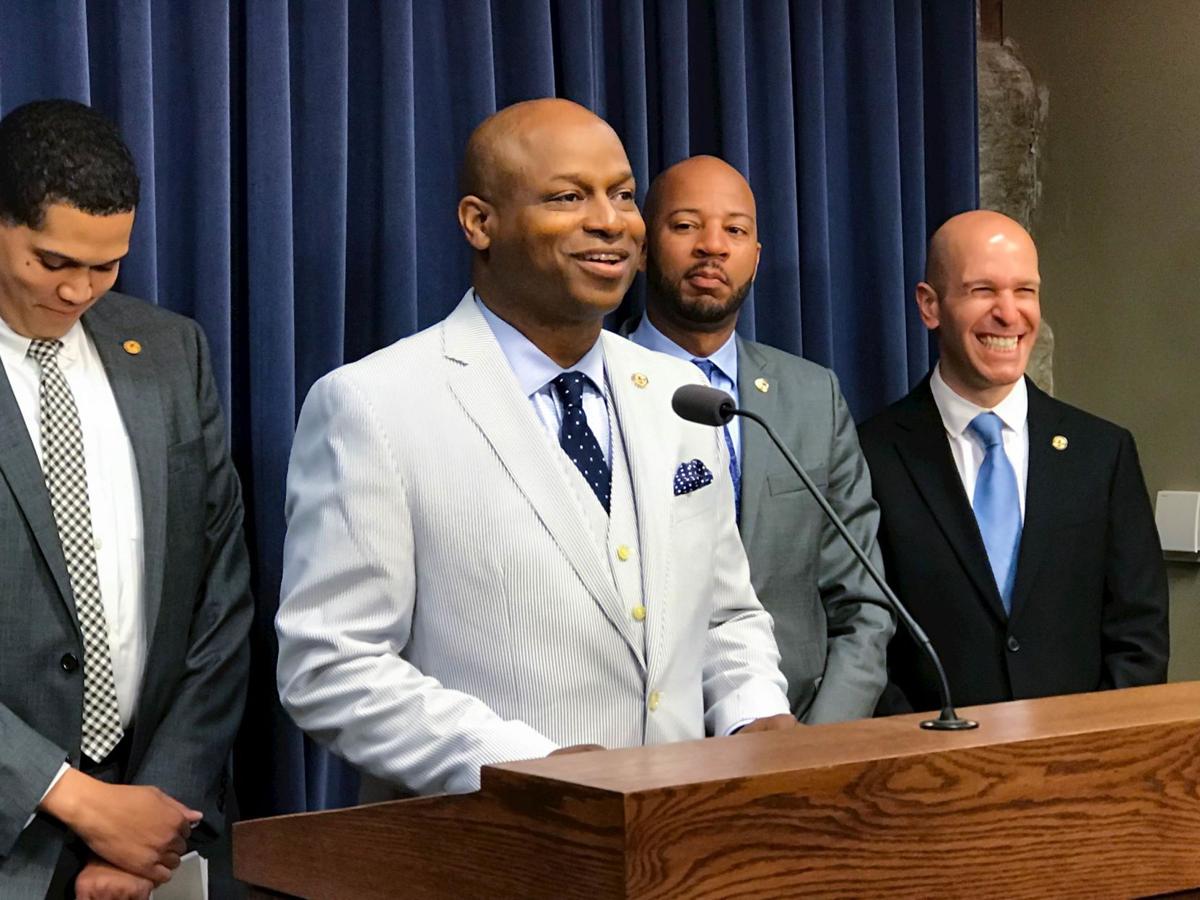 Rep. Emanuel “Chris” Welch, D-Hillside, speaks during a news conference May 29 at the Capitol in Springfield. 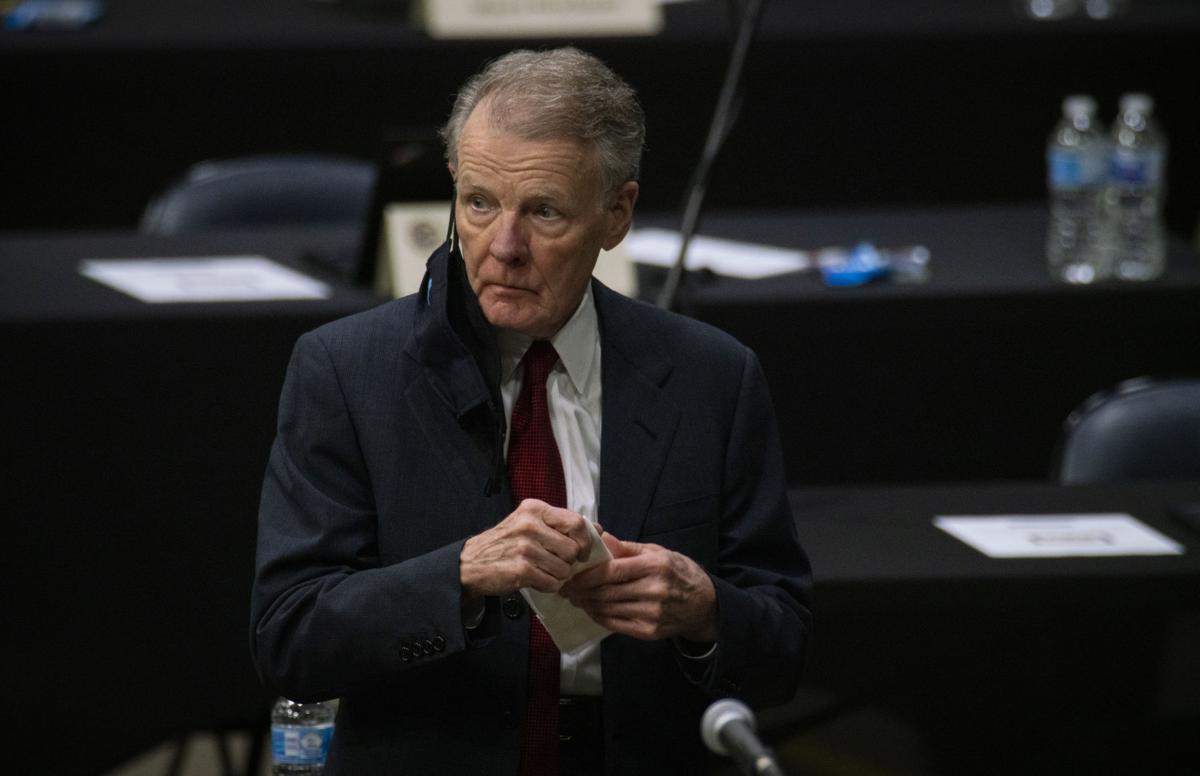 During public comments, state Rep. Emanuel "Chris" Welch addresses the issues concerning seclusion in Chicago Public Schools during a standing room only meeting of the Illinois State Board of Education at the Thompson Center in Chicago on Nov. 22, 2019.