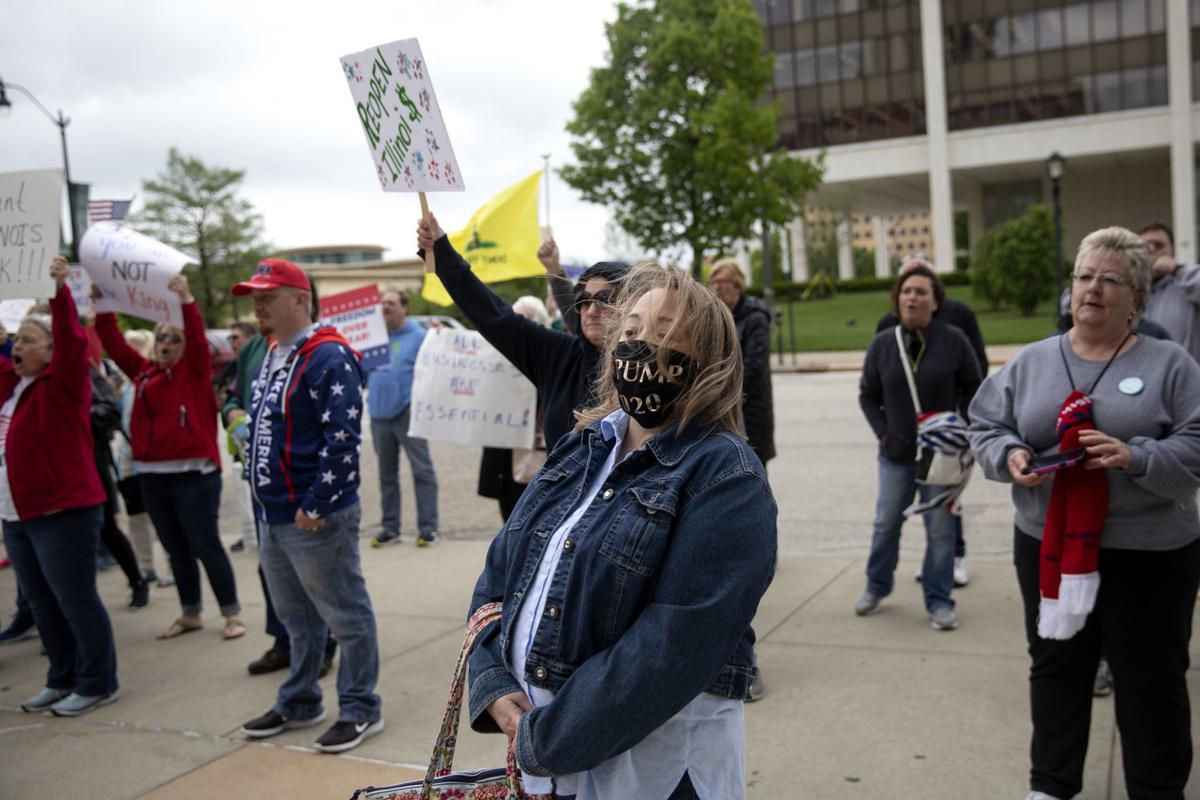 Patricia Maryniak, of Normal, gathers Wednesday with other protesters calling for the government to reopen Illinois outside the Bank of Springfield Center as members of the Illinois House of Representatives meet inside for the first time in more than two months. 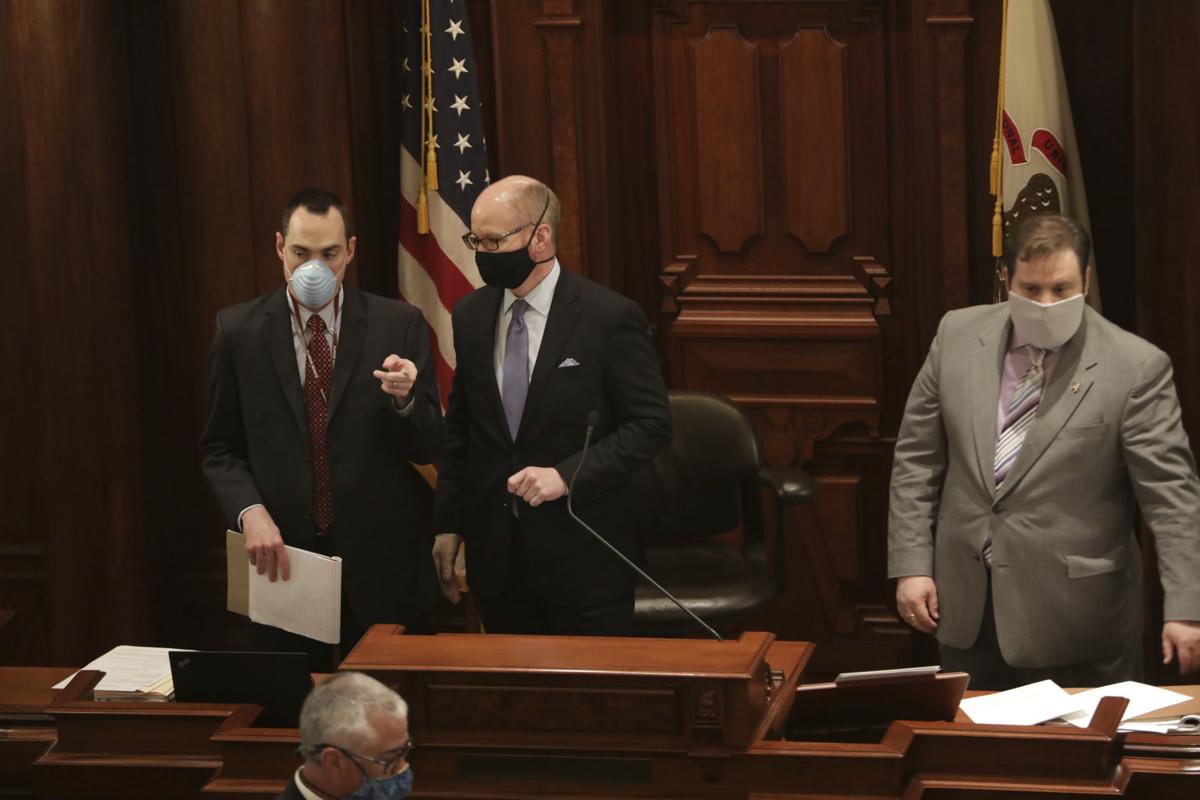 New Illinois Senate President Don Harmon, D-Oak Park, center, and others wear masks amid the coronavirus pandemic during session at the State Capitol on Wednesday.

SPRINGFIELD — Illinois legislators approved extraordinary safety rules Wednesday as they convened for the first time in 10 weeks due to the coronavirus pandemic, prompting the highly unusual step of removing a Republican from the House floor when he refused to wear a face mask.

The Legislature has canceled all its scheduled meetings since early March because of health guidelines to keep at least 6 feet of space between two people, which is nearly impossible in the close quarters of the Capitol.

The House, with its 118 members, abandoned the Capitol chamber for the Bank of Springfield Convention Center six blocks away. Tables were spread across the vast floor to allow for social distancing, and everyone entering either the convention center or the Capitol had to undergo a body temperature check and wear a face covering to limit the chances of spreading the virus.

Rep. Jim Durkin, the House GOP leader, called on members to approve and follow an emergency House rule requiring members to wear masks, saying it's important to protect members' families, as well as each other and legislative and convention center staff.

"The bottom line is we have to put them before ourselves," Durkin said before lawmakers approved the rule on a 97-12 vote.

Among the "no" votes was GOP Rep. Darren Bailey of Xenia, who filed a legal challenge to Democratic Gov. J.B. Pritzker's stay-at-home order in effect since March 21. He said he was speaking on behalf of Illinois residents who feel "captive" and "burdened" by state-ordered restrictions on movement.

Moments before he was escorted out after refusing to comply, Bailey voted against the face-covering requirement, saying the majority was "silencing millions of voices of people who have had enough." He walked out without incident.

The administration reported 147 more COVID-19-related deaths in Illinois Wednesday, bringing the total number of people who have died to 4,525 deaths. New cases numbered 2,388, for a total of 100,418 infections, although many of those have recovered.

Lawmakers, whose scheduled adjournment date is May 31, must approve a state budget for the fiscal year that begins July 1. It may be one of the more challenging budgets in Illinois history. The pandemic, which has closed non-essential businesses and ordered people to stay at home, has ripped a $7 billion deficit in the current and next year's spending plan.

The two chambers late Wednesday positioned pieces of legislation to serve as a budget bill and a capital construction measure and said negotiations now begin in earnest.

The 59-member Senate is meeting in its chamber, but not all at once. Instead, small groups of senators are on the Senate floor at one time, with one senator presenting legislation and one speaker to rise in support or opposition of it. Rather than voting simultaneously — a process that typically takes at most a few minutes — lawmakers are being called to the floor in groups, apparently alphabetically by last name, considerably increasing the time it takes to record their votes.

Pritzker, under continuing pressure to provide a roadmap to taxpayers eager to return to a former way of life, deviated Wednesday from his original plan by announcing that outdoor dining will be allowed starting May 29 at restaurants which can place tables 6 feet apart and observe other safety protocols.

It's a shift in the governor's five-phase "Restore Illinois" plan. Pritzker has emphasized that most of the state can move to the third phase when his current stay-at-home order expires at month's end. That phase allows for the reopening of manufacturing and retail and for small groups to congregate. But restaurants and bars, hardest hit by the shutdown, had not been scheduled for reopening until the fourth phase, possibly months away.

"Outdoor dining strategies, supported by the administration, extend a lifeline, helping bring back jobs and offering the dining and hospitality experience they (patrons) have been missing," said Sam Toia, president and CEO of the Illinois restaurant association.

Lawmakers voted to remove Republican state Rep. Darren Bailey from the House of Representatives floor Wednesday after he refused to wear a face mask.

As lawmakers return to Springfield on Wednesday, Republicans continued their offensive against Gov. J.B. Pritzker’s reopening plans and an emergency rule that allows businesses violating his stay-at-home order to be charged with a misdemeanor

Will Chicago’s role as the home of the Broadway out-of-town tryout help it lead Broadway in reopening theater?

The Chicago Teachers Union on Wednesday announced it is suing U.S. Department of Education Secretary Betsy DeVos and the city's public school district, saying its policies interfere with the education of students with special needs during the coronavirus pandemic.

Farmers across the nation leaned more heavily upon the federal government last year to finance their agricultural operations amid low commodity prices and trade disputes, and more of the money they borrowed is now delinquent.

A court is expected to rule Friday on a request to invalidate the stay-at-home order in Illinois, part of a legal process that could determine the fate of measures meant to contain the spread of the coronavirus.

With the release Thursday of weekly jobless claims from the U.S. Department of Labor, Illinois hit a milestone: Since mid-March, when the stat…

Patricia Maryniak, of Normal, gathers Wednesday with other protesters calling for the government to reopen Illinois outside the Bank of Springfield Center as members of the Illinois House of Representatives meet inside for the first time in more than two months. 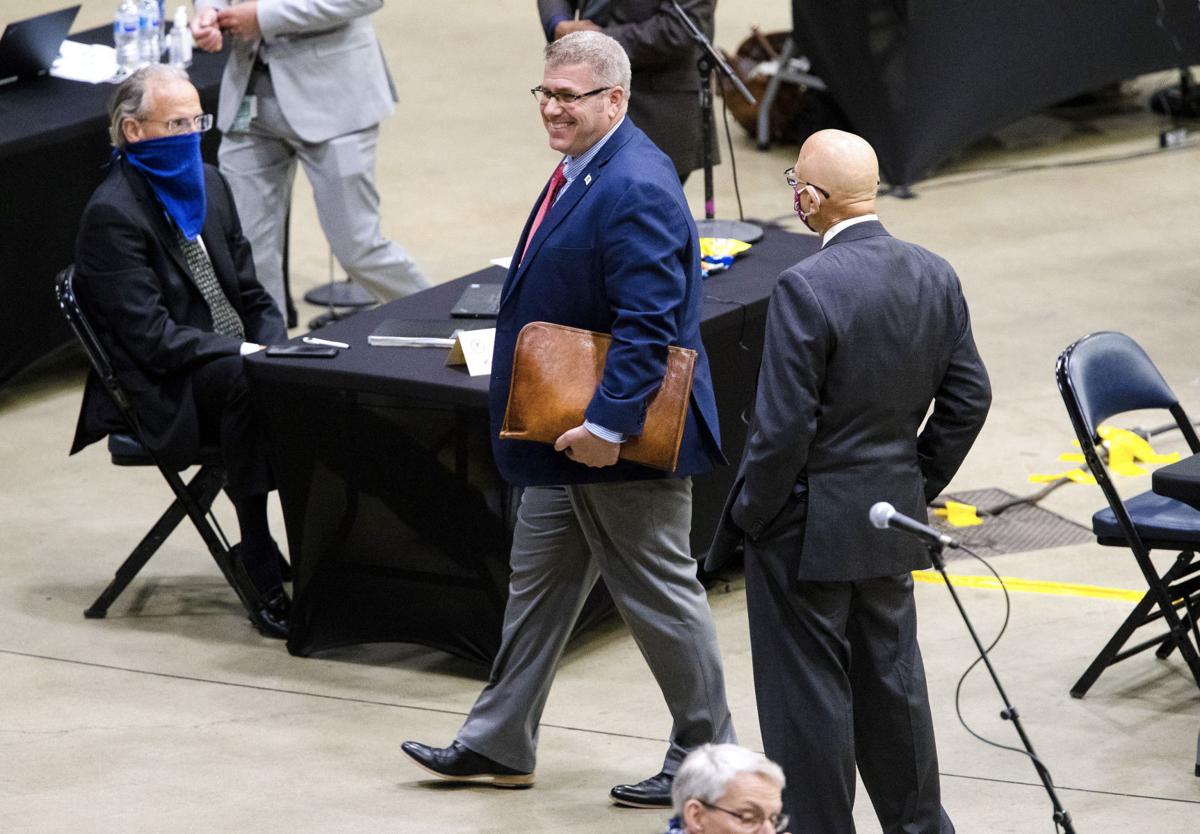 State Rep. Darren Bailey, R-Xenia, stands to leave the Bank of Springfield Center in Springfield, where the Illinois House of Representatives voted 81-27 to remove him from the House floor for not wearing a mask Wednesday. 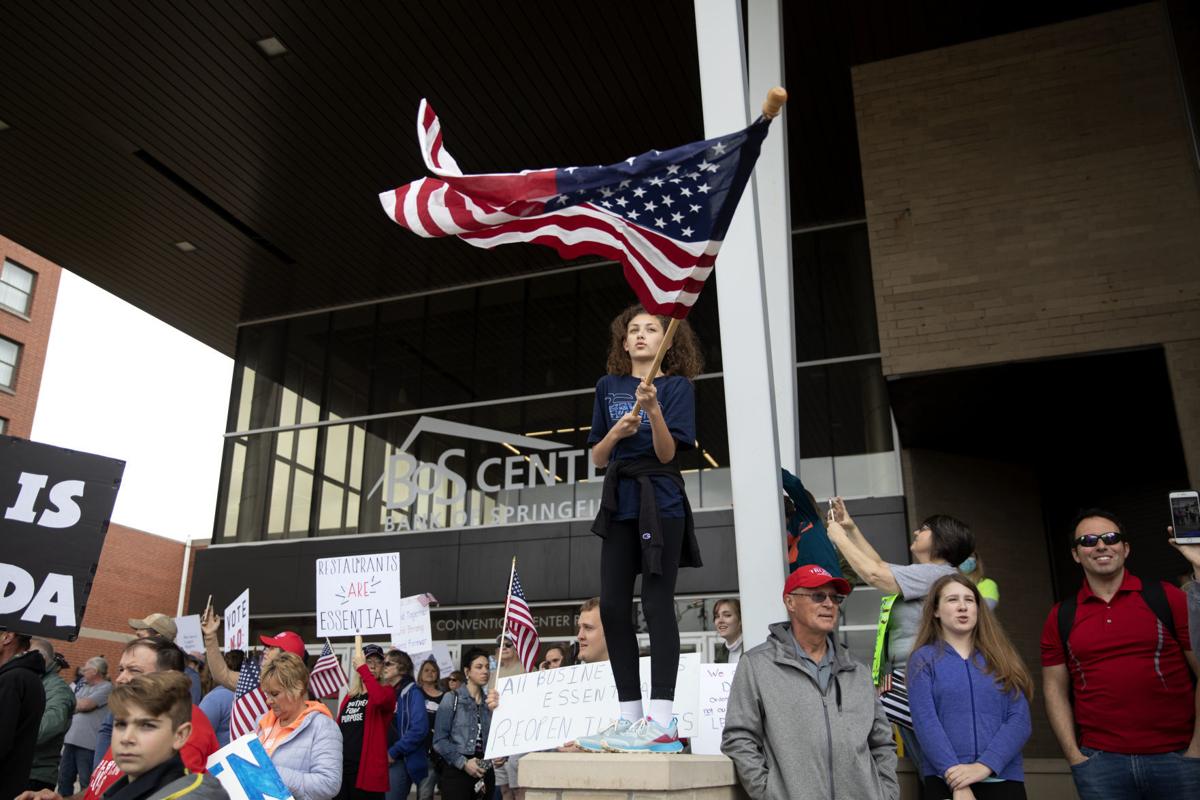 Adalyne Houston, 12, of Peoria, on May 20 gathers with other protesters outside the Bank of Springfield Center, where the General Assembly was gathering. The state is entering Phase 3 of a reopening plan. 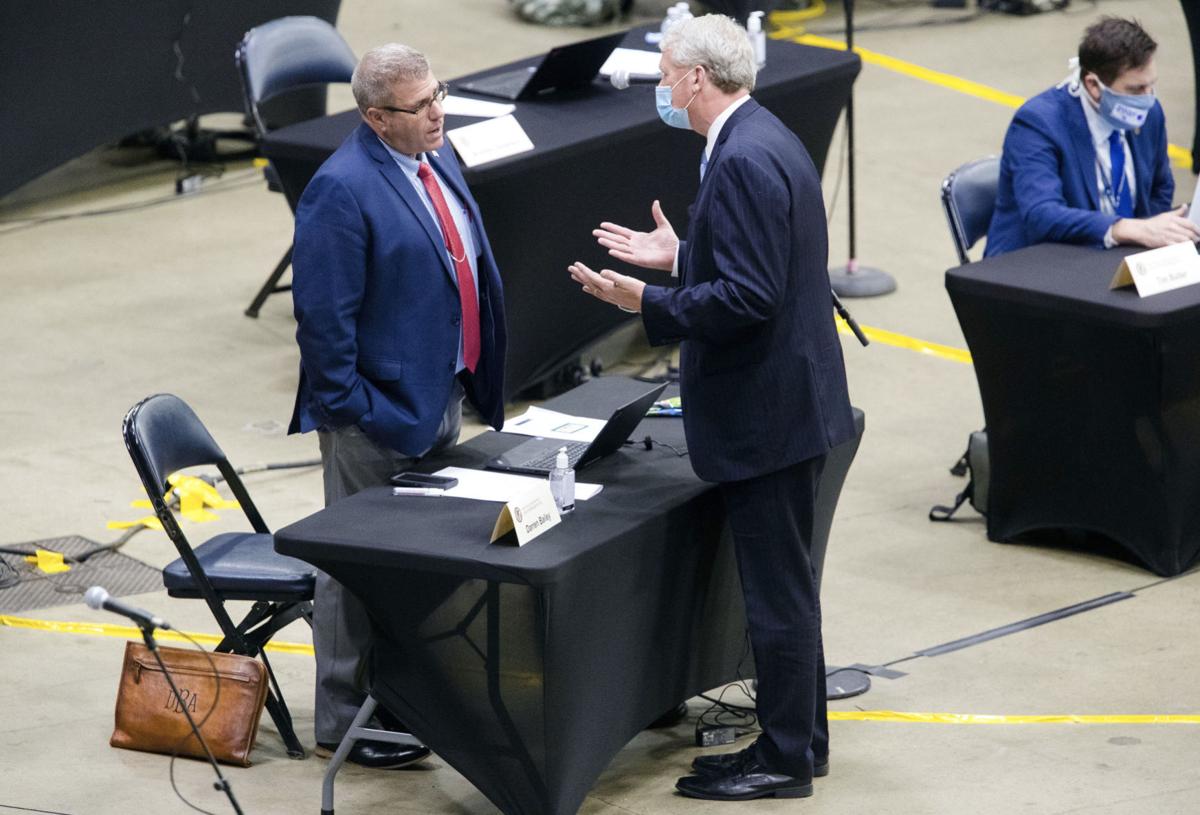 State Rep. Darren Bailey, R-Xenia, left, listens to Illinois House Minority Leader Jim Durkin, R-Western Springs, as they speak before the Illinois House of Representatives voted 81-27 to remove Bailey from the House floor for not wearing a mask Wednesday.

New Illinois Senate President Don Harmon, D-Oak Park, center, and others wear masks amid the coronavirus pandemic during session at the State Capitol on Wednesday. 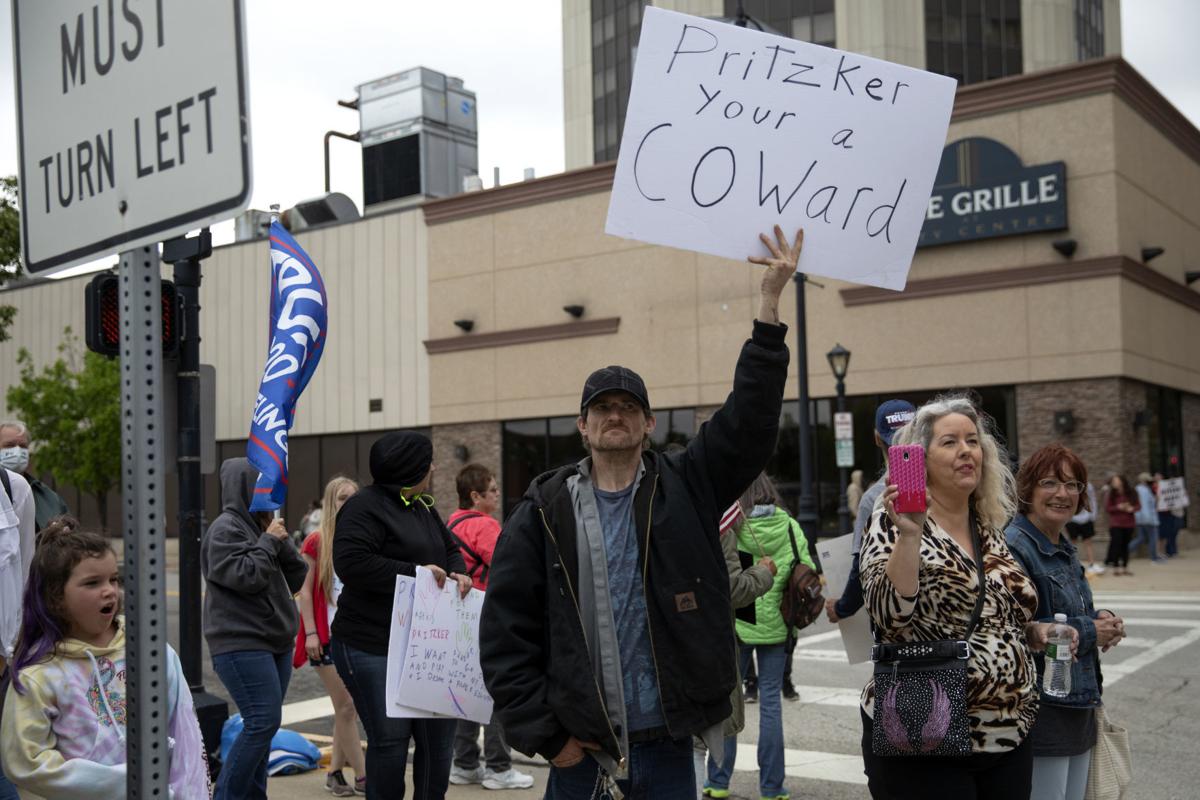 Chad Hutson, of Charleston, gathers Wednesday with other protesters calling for the government to reopen Illinois outside the Bank of Springfield Center.