Become a Member
Read Today's E-edition
Share This
Why does the state of Illinois want to rename Asian carp? Racism and economics
0 comments
Share this
{{featured_button_text}}

The state of Illinois wants to rebrand Asian carp for two reasons:

A new, non-carp name could help make the fish seem more inviting on restaurant menus, said Kevin Irons, assistant chief of fisheries for the Illinois Department of Natural Resources. More consumption could increase the harvest of the invasive species and thus help the Illinois River and other waterways.

Further, Irons said, Illinois wants to steer away from any racist implications by the "Asian" reference.

"With things going on in the world today, we thought it was time to make a change," Irons said. " ... Even though the fish are from China, we don't want to do anything that gives anyone ammunition for hate."

The effort is part of a DNR initiative, "The Perfect Catch." The department is keeping tight-lipped about any name possibilities. The DNR had hoped for an announcement in June, but the department is taking extra time to make a solid choice.

"No one has a handle on the name," Irons said.

For thousands of years, the fish has been a dining staple in Asia, especially China, where it is a good luck symbol. Of a dozen varieties, four — silver, bighead, black and grass carp — were brought to Arkansas and elsewhere in America in the 1970s to raise for sale to China and to help manage snails and algae in ponds.

But during floods, the fish escaped their habitats and wriggled up the Mississippi River and eventually to the Illinois River. The hearty bottom-feeders spawn year-round, often growing 40 inches long. They can amass 40 to 50 pounds, with some whoppers hitting 100 pounds.

Their voraciousness threatens the food supplies of natural species. Plus, vibrating motors prompt the slimy fish to leap 10 feet above water, creating hazards to water skiers, anglers and others.

The exact root of the "Asian carp" tag is unclear. According the Associated Press, the journal Fisheries found that the label began showing up in scientific literature in the mid-1990s and took hold in the early 2000s as worries about the fish grew.

Outside Illinois, the fish's name already has undergone transformation.

In 2014, an Asian business delegation arriving at the Minneapolis airport encountered a sign reading "Kill Asian Carp" — a well-intentioned plea to prevent spread of the invasive fish. But the message was off-putting to the visitors, according to the AP. So, Minnesota lawmakers switched the state's reference to "invasive carp."

And just this April, though the species' scientific names remain unchanged, the U.S. Fish and Wildlife Service quietly altered its designation to "invasive carp."

"We wanted to move away from any terms that cast Asian culture and people in a negative light," said Charlie Wooley, director of its Great Lakes regional office, told the AP.

In Illinois, the DNR hasn't heard any direct complaints regarding any misgivings about the term Asian carp, Irons said. However, in working with other states and agencies in planning to thwart the spread of the species, DNR has been keenly aware to an overall growing concern regarding possible racial implications, Irons said.

"We certainly don't want to refer to our critters in a way that hurts people," Irons said.

Plus, the name change makes even more sense when factoring in economic benefits, he said. Many people can't imagine going to the store or a restaurant for any type of carp.

"It's a four-letter word," Irons said. People turn up their noses when they hear 'carp."

Can a moniker makeover boost consumption? It's worked before. Irons points to the fish formerly known as "slimehead."

"Who wants to order slimehead?" he said with a chuckle. "That doesn't sound like something good to eat."

But in the late 1970s, the U.S. National Marine Fisheries Service swapped "slimehead" for "orange roughy." It later exchanged "Patagonian toothfish." for "Chilean sea bass." The rebranded names now hold popular and prominent positions on the menus of many fine-dining establishments.

DNR wants to see a similar switcheroo with Asian carp.

"It's not a name fishermen will use out there," Irons said. "But it's about consumption. What will look good on a menu?"

Increased consumption would boost harvesting of the species, Irons said. That would be good news for the Illinois River along with other invaded waterways. Plus, it could reduce fears of the species making it into Lake Michigan and other Great Lakes, threatening a $7 billion-a-year commercial fishing, according to the Chicago Sun-Times.

The market is ripe for the fish, which in America sells well in bigger cities with significant Asian population. Often, Asian carp — a nutritious fish that, when prepared properly, carries a mild flavor — sells for a dollar less per pound than other whitefish.

In "The Perfect Catch" initiative, the DNR has done multiple studies and had innumerable conversations with economists, fishermen, processors other experts and stakeholders, Illinois and other states. After picking a name, DNR hopes to see a marketing campaign akin to "Pork. The Other White Meat" or "Milk: It Does a Body Good."

But such an advertising effort would not involve a financial investment by the state. An ad campaign would be the work of the fish industry, which has been looped in during the name-changing process.

"We're jump-starting it," Irons says. "But ultimately it's a hand-off to the industry."

As for new name, Irons will offer no legit clues — "I jokingly call it Kevin," he says with a laugh — but believes consensus will be reached this year. DNR doesn't want to rush to pick a name.

"We want to make sure it's the best possible one," Irons said. "You only get one shot." 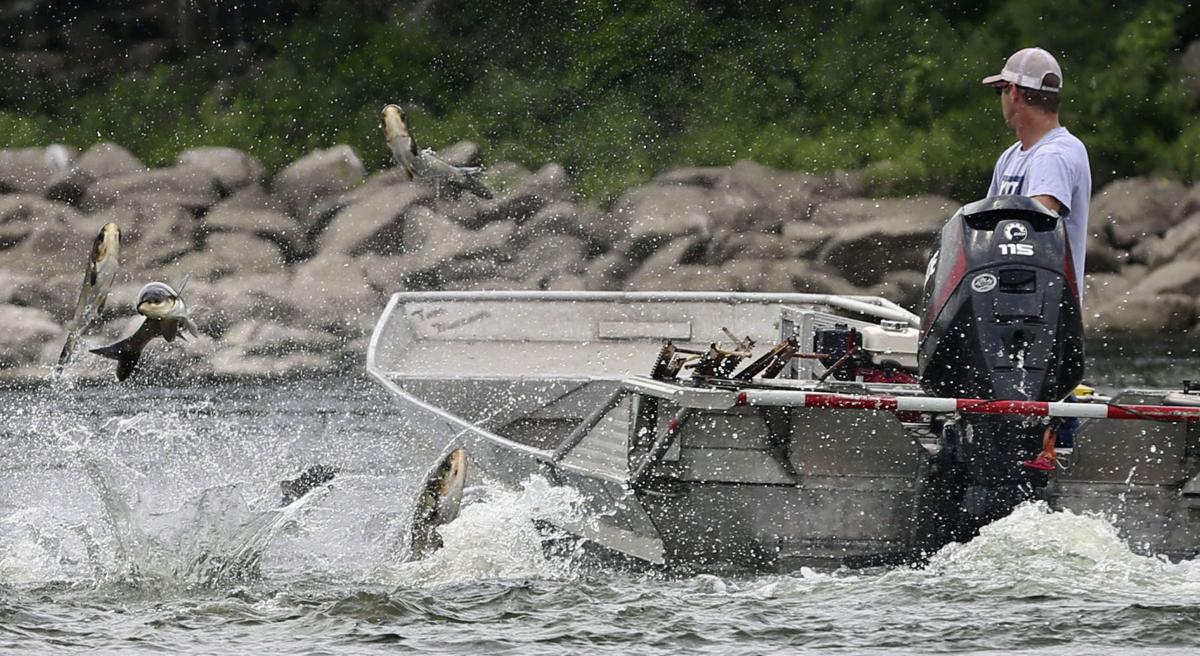 State-contracted commercial fishermen remove Asian carp from the dam on Lake Decatur in December 2019. Silver carp, one of the species found in the area, are known for their ability to leap as high as 10 feet out of the water. 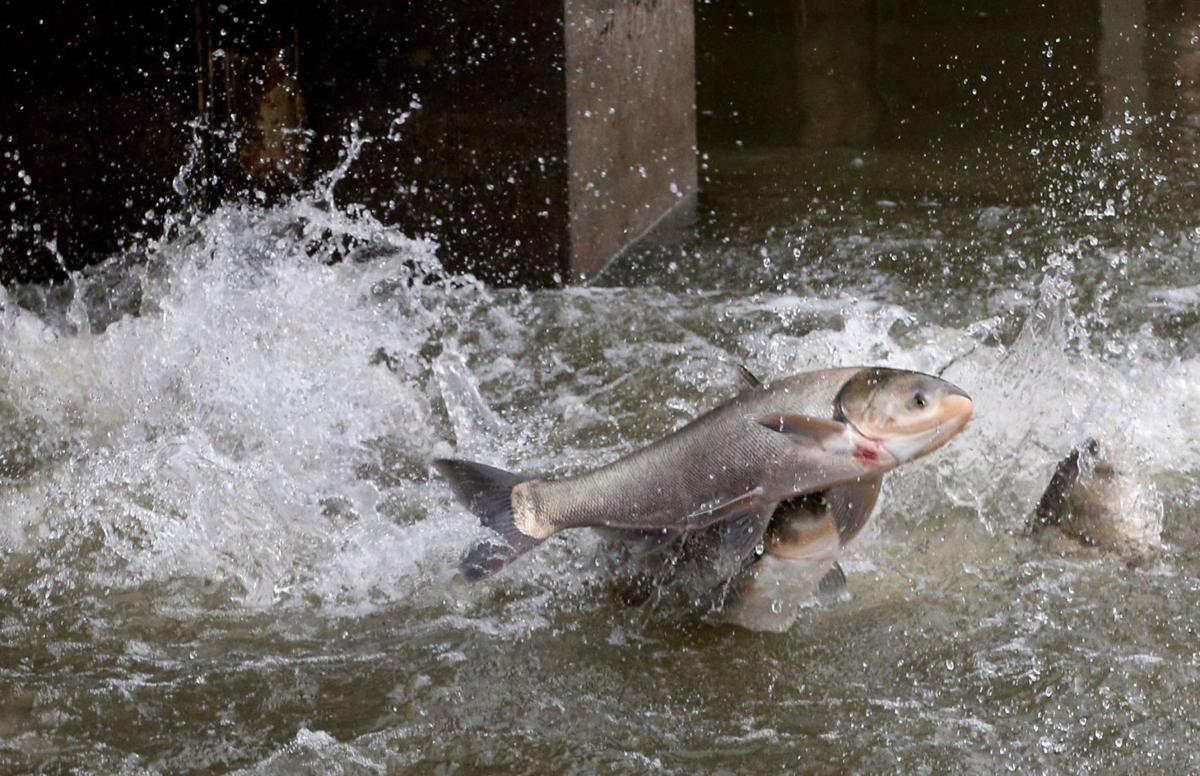 Asian carp leap near the fish sorting machine at Emiquon Preserve near Lewistown on May 17, 2021.