Become a Member
Read Today's E-edition
Share This
The Rural Patriot horse is gone, but patriotism remains in Arthur
0 comments
Share this
1 of 2 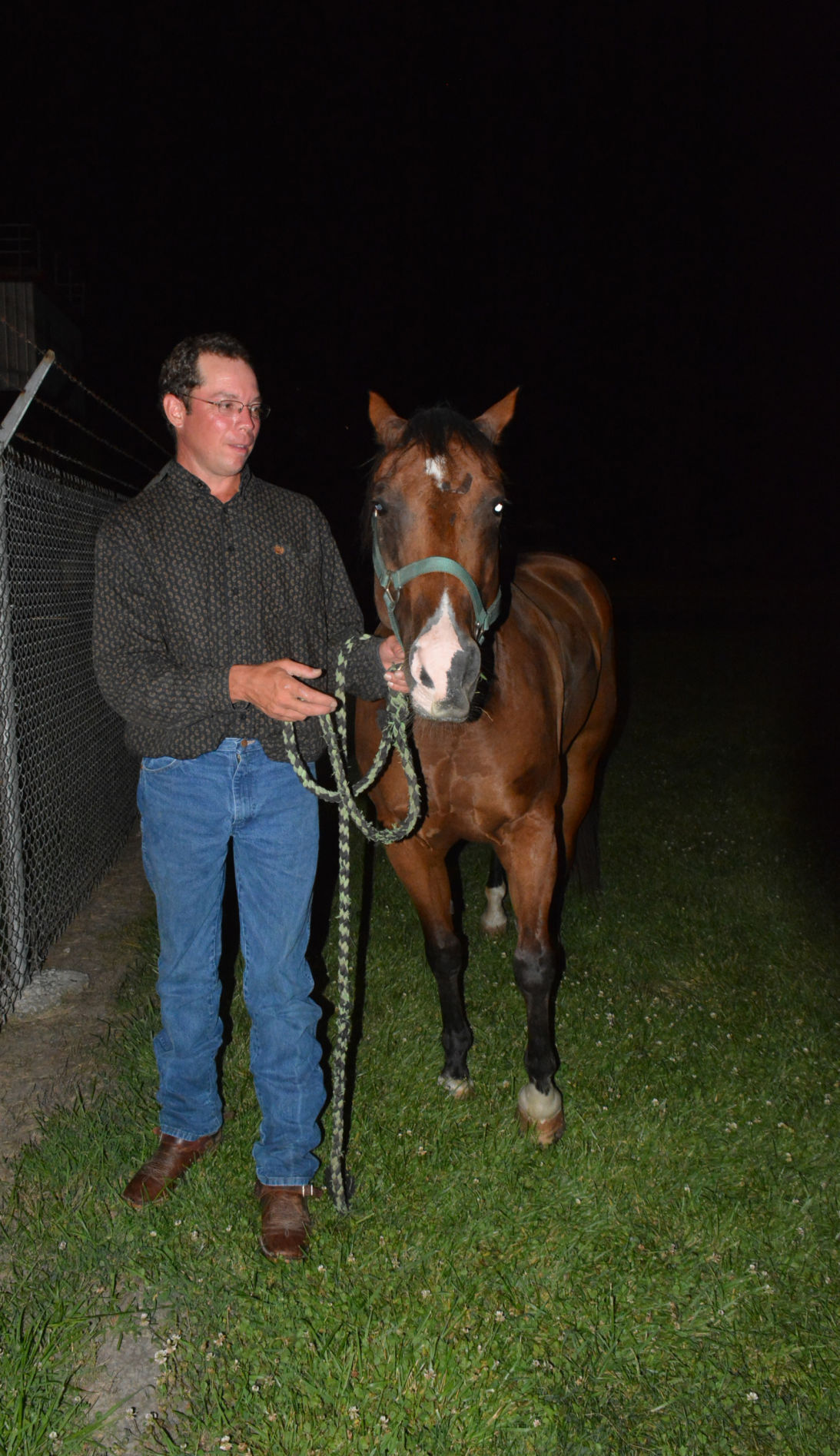 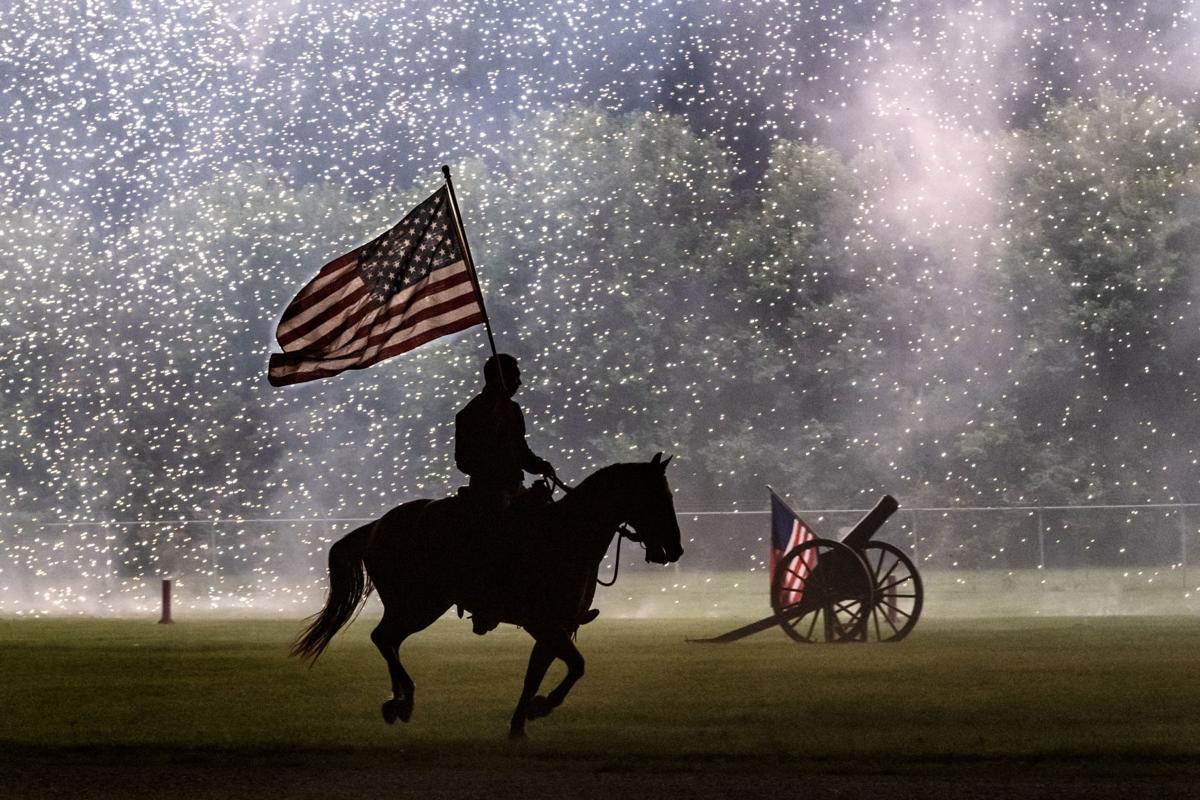 Marty Miller, riding Snip, has performed at the Arthur Fireworks show since 2003 as the Rural Patriot, riding across the field in front of the Niagra Falls display.

ARTHUR — One of the big moments of the annual Arthur Fireworks show is when the Rural Patriot rides out in front of the “Niagara Falls” display, horse and rider bearing the American flag and silhouetted against the light.

Marty Miller has been the Rural Patriot since 2003, when his cousin, Larry Schalbach, came up with the idea. The first horse, Doc, retired in 2013 and was replaced by Snip, an American quarter horse the next year.

Sadly, Snip, 15, contracted pneumonia and died recently and won't be in this year's show, set for July 31, but Miller plans to honor his memory at the same time he honors the military. Instead of riding out during that portion of the show, Miller said, he and his brother Doug will carry Snip's saddle and the flag to the center of the field and place the flag on the saddle.

“I'm not just riding for (the) Niagara Falls (show), I'm riding for American soldiers and the freedom we have,” Miller said. “I'm a lot more patriotic since I've been doing this. I have family members who are veterans and some killed in war. This has touched a lot of people's lives, and that's why I keep doing it.”

Miller is a horse trainer by profession and Snip was his own horse, bought as a foal as soon as he was weaned. The previous horse, who performed from 2003 to 2012, is retired, and Snip took over in 2013.The plan is to train another horse to do the show in time for next year, Miller said.

The Rural Patriot ride comes at the end of the show, as the smoke is clearing, and Miller said the hope is that it will remind people of the Star-Spangled Banner and how the song was born. Francis Scott Key was watching the British bombardment of Fort McHenry during the War of 1812, and when dawn came and the smoke cleared, there was the American flag, tattered but still waving.

The idea to begin having the horse and rider rose from the light cast by the Niagara Falls firework at the end of the show, Schalbach said. As the men were planning the fireworks show, they thought they needed to do something extra-special with all that light.

“Everybody really enjoys it,” Schalbach said. “It's really cool to see him riding out and it's really very patriotic. It represents America and our freedom and America has been through a lot but we always come out with the American flag raised high.”

🎆 From the Archives: Fourth of July in Central Illinois

Thousands of celebrants for Fourth of July festivities

Kids find arts on the Fourth

The felony has a maximum sentence of up to five years in prison and a $250,000 fine.

Exelon moves to shut down 2 nuclear power plants in Illinois

Exelon filed plans with federal regulators to shut down two nuclear power plants for which it is seeking state subsidies that have been caught up in stalled energy negotiations in Springfield.

The change to federal guidance came as cases in Illinois and around the country continue to rise as the vaccination pace stagnates and mask mandates are relaxed.

An Illinois woman who was captured on video being bluff charged by a grizzly bear while she was taking photos in Yellowstone National Park has been charged with two offenses.

Republican gubernatorial candidate Gary Rabine said he would not encourage people to get a COVID-19 vaccination, incorrectly saying the shots were not FDA-approved and had caused thousands of deaths.

With the more-contagious delta variant now the dominant strain of COVID-19 in the United States, case numbers and hospitalizations are surging, with the virus especially preying upon regions with low vaccination rates.

Joliet-area couple charged with breaching US Capitol during Jan. 6 insurrection

Authorities said the couple appeared in social media posts inside the Capitol rotunda during the unrest. They were identified in part by the woman's Joliet plumbers union jacket.

“I recall thinking to myself, this is how I’m going to die, defending this entrance,” Capitol Police Sgt. Aquilino Gonell said. “I could have lost my life that day, not once, but many times.”

'They hate me that much?': Panhandlers in Peoria say they face mistreatment

“I hope we don’t get there. What we’re going to keep focusing on is pushing the vaccine. But my number one priority is to keep people safe.”

Marty Miller, riding Snip, has performed at the Arthur Fireworks show since 2003 as the Rural Patriot, riding across the field in front of the Niagra Falls display.