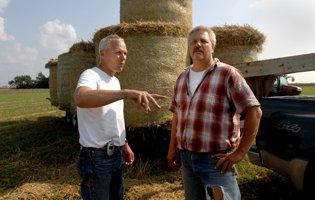 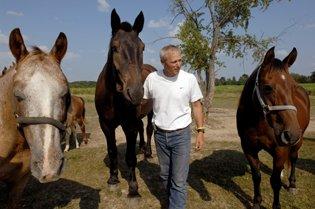 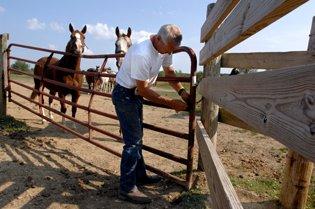 SPRINGFIELD - Thomas Pliura has kept horses at Moraine View State Park for more than 20 years, selling trail rides to campers or using the animals to tow hay racks in the fall.

But the park near Ellsworth is one of two dozen state parks and historic sites scheduled to close this fall, leaving Pliura in limbo.

"We're not really sure what we're going to be able to do," he said Tuesday.

Pliura, who leases land at Moraine View for the horses, then charges for rides, is just one of scores of private businesspeople across the state who make money by providing park users with food, firewood and other services.

Now that Gov. Rod Blagojevich has decided to close down the parks, officials have to figure out how exactly to close the facilities and what to do with vendors like Pliura who provide services there.

Department of Natural Resources spokesman Chris McCloud said the agency will be trying to figure out the logistics of closing the parks over the next several weeks.

What's not included in those talks, though, are plans on how to eventually reopen the parks. McCloud said the agency won't make those plans until there's money in the state budget to pay for the parks.

"That's a budget decision," he said.

Pliura said he might file a lawsuit depending on what kinds of answers he receives about Moraine View's closing.

Similar conversations are occurring at other affected sites. Supporters of Weldon Springs State Recreation Area, for example, are planning to distribute signs in the DeWitt County area, as well as hold a rally soon.

"We're getting them printed up now," said state Rep. Bill Mitchell, R-Forsyth. "It sure hit a chord with those folks."

McCloud said the agency has heard from supporters of nearly every park scheduled to close. But closings will proceed as planned, he said.

"You could make a case for every park in our system," he said.

Eleven parks are scheduled to close Nov. 1, while 13 historic sites are set to shut down Oct. 1. More than 70 workers associated with the sites will be laid off.

Attendance at individual sites varied. The David Davis Mansion in Bloomington, for example, is set for closure, but attendance at the site rose in the first seven months of the year from 26,217 in 2007 to 26,865 this year.

Illinois Historic Preservation Agency spokesman David Blanchette said he didn't have an explanation for attendance being down this year, but said the closures would undoubtedly send numbers lower,

Christina Raines said she is sharing her “truth” for the first time after standing by Peterson while he was under suspicion in the 2007 disappearance of Stacy Peterson and the 2004 death of Kathleen Savio. Catch her interview at 9 p.m. tonight on Lifetime's “Cellmate Secrets."

One man was shot late Tuesday in the street in the 1500 block of Hancock Drive, Normal. His condition isn't known.

Prosecutors say a Bloomington man broke into a nonprofit organization's office and stole phones, laptops and other items.

No arrests have been made, as detectives are investigating “the possibility of a targeted attack on the victim,” police said.

More than 30 people signed up to speak during the public comments segment of the McLean County Unit 5 school board meeting. Many spoke in support or opposition to masks, sex education and social studies curriculum.

A vehicle fire in the 2000 block of Main Street caused traffic to be rerouted Monday.

Mask shaming: Illinois has reopened, but some still wear masks. How does that make you feel?

"We have to have a serious discussion about kindness in America; the rapidity with which people resort to anger and upset is really quite startling."

Gov. J.B. Pritzker announced the “all in for the win” vaccine lottery at an event in Chicago, noting it would award $7 million in cash prizes for adults 18 years of age and older, as well as $3 million in scholarship awards for Illinoisans ages 12 to 17.

BLOOMINGTON — A Bloomington man is awaiting his bond after being accused of strangling his ex-girlfriend.

Autopsies in Tennessee show that a 1-year-old child starved to death in his car seat in a house where his mother died of a drug overdose. His 3-year-old sister, found alive, tried for days to feed her brother.

Watch now: How to use app to ID flowers

Watch now: How to use app to ID flowers

Tom Pliura checks on his horses Tuesday, Sept. 2, 2008, at Outlaw Outfitters Riding Stables at Dawson Lake in Moraine View State Park. (The Pantagraph/CARLOS T. MIRANDA)
© Copyright 2021 The Pantagraph, 205 N. Main St. Bloomington,IL | Terms of Use | Privacy Policy | Do Not Sell My Info
Powered by BLOX Content Management System from TownNews.com.
You don't have any notifications.