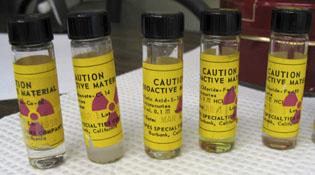 In this photo released by the Illinois Emergency Management Agency are vials of low-level radioactive, from left: Cobalt-60; Carbon-14; Sulfur-35; Iron-55 and Iron-59 that were removed by IEMA officials from Glenbard East High School in Lombard, Ill., on Oct. 20, 2006. IEMA launched a program this month to collect and help schools dispose of leftover and sometimes forgotten radioactive materials from school labs. (AP Photo/IEMA) 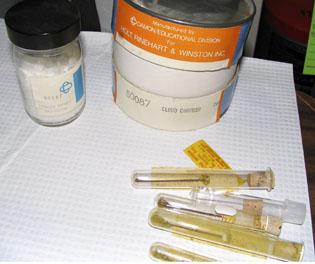 In this photo released by the Illinois Emergency Management Agency are chemicals with very low-level radioactive material and test tubes, lower right, containing radium needles that were removed by IEMA officials from Batavia High School in Batavia, Ill., on Oct. 20, 2006. (AP Photo/IEMA) 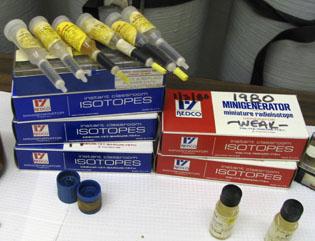 CHICAGO - A physics teacher was taking inventory of chemicals in a storage room at Tri-City High School when she noticed a container that looked a little strange.

She peered closer and worried that it was radioactive. It turns out, it was.

"She was very alert about realizing that it could be a hazard," said Randy Dwyer, principal of the Central Illinois school.

School labs have used low-level radioactive materials safely for decades; experts say they're critical in teaching physics and chemistry. Sealed samples - often leftovers from past experiments - frequently are saved in closets and storerooms.

But as teachers retire and containers get shoved aside to make way for new samples, it's easy for schools to lose track of what they've got, or to store them incorrectly, said Sandra West, an associate biology professor at Southwest Texas State University in San Marcos.

"It isn't that schools shouldn't have them (radioactive materials), but it shouldn't be a surprise that they have these materials in inventory," West said.

The Illinois Emergency Management Agency launched a program this month to help schools safely dispose of radioactive materials. IEMA officials collect the materials and send them to a radioactive waste disposal facility.

Bloomington High School was among the first schools that took advantage of the program, which did not cost the school any money.

"It was a routine disposal of chemicals used in the science department, but it was a good opportunity for us to be able to dispose of things in a proper manner," BHS Principal Cindy Helmers said, noting the material in this case wasn't radioactive. "They came and picked up two tiny containers of white powder."

It could have cost the district $1,000 to pay for proper disposal itself, she said.

Illinois' program is one of several around the country - such as Connecticut, Colorado and Vermont - that have sprung up since the federal government, following the 2001 terrorist attacks, recommended hunting down radioactive materials in schools, businesses and medical facilities.

Nationally, the U.S. Department of Energy has collected radioactive materials from more than 10,000 sites, mostly in schools and businesses, since 1999.

At Tri-City in Buffalo, Dwyer turned to IEMA for help with the strange containers at his school. IEMA officials removed three containers of radioactive material earlier this month.

"It wasn't something where we had a biological hazard, but any is beyond the level of safety for our school," Dwyer said. "Why have something laying around that could become a prank? We don't want to be the headline of the national news."

In what one state official called a "classic example," a Colorado high school kept a chunk of ore from a field trip in a display case for years.

The rock turned out to be radioactive, said Ken Niswonger, chief chemist at the Colorado Department of Public Health and Environment, which has collected materials from schools since 1999.

"The ore was quite hot," Niswonger said. "Everyone who walked by got quite a high dose (of radiation) over 20 or 30 years."

The barrel-shaped, lead-shielded machines, called "gammators," were used in the 1960s and 1970s to teach students about radiation exposure to plants and seeds. Inside each 1,850-pound gammator was a rod of cesium-137, a radioactive isotope widely used in businesses and medical research.

In the wrong hands, the cesium-137 could be used to make a dirty bomb, West said.

Still, most people overreact when they hear the word "radiation," which comes from manmade and natural sources - like the sun and earth - and is safe if stored correctly, said Kevin Roark, spokesman for the Santa Fe, N.M.-based Los Alamos National Laboratory.

"People have a somewhat irrational fear of all things radioactive," Roark said. "There's a real educational purpose. You need that stuff to teach chemistry. And physics. But if you're not using them correctly, then you shouldn't have them."

The most common problem is that schools don't take annual inventory of their storage closets or keep material lists handy for staff, experts said.

"Almost everything can be used safely if you take the time to understand what you've got, but many districts don't," said James A. Kaufman, director of The Laboratory Safety Institute in Natick, Mass., a nonprofit agency that promotes school lab safety.

Most school administrators also don't include in their budgets money to get rid of radioactive materials, Kaufman said.

Hiring someone to remove those materials would cost schools more than $1,000 per job, according to IEMA.

"Year after year … there's no money to pay for the disposal of hazardous waste so it accumulates and chemicals accumulate," Kaufman said.

"It's a low hazard but they (principals) want no hazard," Thompson said.

Phyllis Coulter contributed to this story.

In this photo released by the Illinois Emergency Management Agency are vials of low-level radioactive, from left: Cobalt-60; Carbon-14; Sulfur-35; Iron-55 and Iron-59 that were removed by IEMA officials from Glenbard East High School in Lombard, Ill., on Oct. 20, 2006. IEMA launched a program this month to collect and help schools dispose of leftover and sometimes forgotten radioactive materials from school labs. (AP Photo/IEMA)

In this photo released by the Illinois Emergency Management Agency are chemicals with very low-level radioactive material and test tubes, lower right, containing radium needles that were removed by IEMA officials from Batavia High School in Batavia, Ill., on Oct. 20, 2006. (AP Photo/IEMA)

In this photo released by the Illinois Emergency Management Agency are containers, top and bottom, holding very-low level radioactive material and boxes containing mini generators used in school experiments to convert Cesium-137 to Barium-137M, blue-left, and Tin-133 to Indium-133M, red-right, that were removed by IEMA officials from Glenbrook South East High School in Glenview, Ill., on Nov. 7, 2006. (AP Photo/IEMA)
© Copyright 2021 The Pantagraph, 205 N. Main St. Bloomington, IL | Terms of Use | Privacy Policy
Powered by BLOX Content Management System from TownNews.com.
You don't have any notifications.