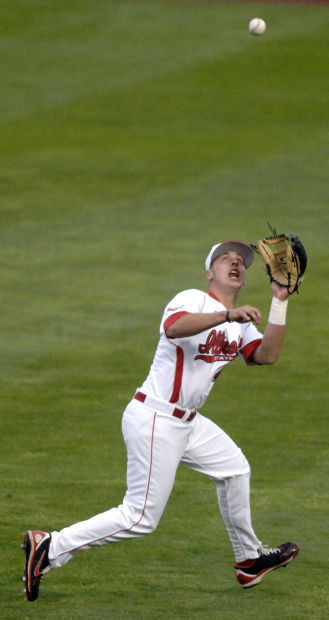 Illinois State's Paul DeJong reaches to catch a fly ball during a game last year at Duffy Bass Field in Normal. DeJong has emerged as one of the Missouri Valley Conference's top hitters while displaying unusual versatility. 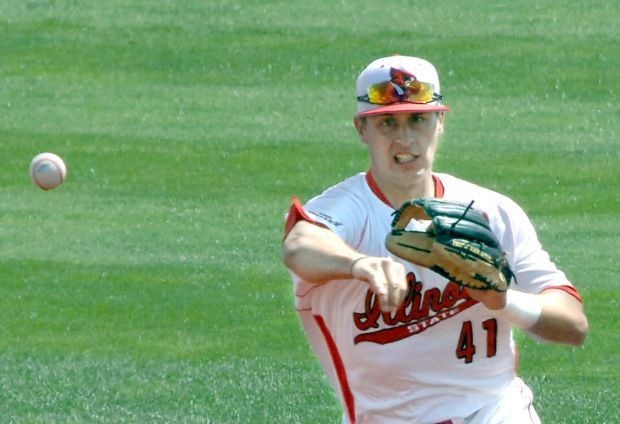 NORMAL — Paul DeJong is covering the bases as a redshirt sophomore on the Illinois State baseball team, and not just on his team-leading six home runs.

ISU's Male Scholar-Athlete of the Year in 2013, DeJong (pronounced de-YOUNG) has emerged as one of the Missouri Valley Conference's top hitters while displaying unusual versatility.

"Paul has just willed himself into being a great player," Redbird coach Mark Kingston said. "He combines intelligence with work ethic and a great desire to be a ballplayer."

DeJong leads ISU and ranks third in the MVC with a .389 batting average entering this weekend's conference series against Southern Illinois at Duffy Bass Field. The Redbirds and Salukis will clash Friday at 6 p.m. Saturday at 2 p.m. and Sunday at 1 p.m.

"It's a change in my philosophy. I'm swinging at better pitches," said DeJong. "Last year I would foul off a lot of good pitches to hit. This year I'm not missing those and they're going out in the outfield. This is where I think I should be. I have to just keep pushing on from here."

"We're not going to pat ourselves on the back. Paul has a very, very fundamentally sound swing. He maximizes his body," Redbird hitting coach Bo Durkac said. "He's not a particularly big guy (6-foot-1, 195 pounds). The way the ball comes off his bat is because he uncorks the right way.

"Combine those mechanics with strength and a quality mental approach, and we're starting to see the results."

DeJong worked his way into the Redbird lineup midway through last season and batted .260 with 17 RBIs.

"I really didn't have that much of an idea what it was like to face college pitching day in and day out," said the Antioch native. "Last year was a good time to adjust myself. Now I'm more comfortable and my body feels more used to competition."

While DeJong has became a mainstay in the No. 3 spot in the ISU batting order, the position he trots out to in the first inning is always subject to change.

Recruited as a middle infielder, DeJong has appeared in 18 games at second base, 10 at third base, six at catcher and two at shortstop this season. Kingston is convinced DeJong would also be adequate at first base and anywhere in the outfield.

"He's a little slow to be a premium shortstop, but he's a great utility guy," Kingston said. "That will really help his value moving forward hopefully into pro ball someday. There is no question he can play any position on the field and do it well."

Catcher is a relatively new undertaking for DeJong, who also played in seven games behind the plate in 2013.

"In high school, I was mainly a shortstop. But I always had the ability to play other positions," said DeJong. "One position I did learn here was catcher.

"Coach Kingston knew some things to look out for, and maybe he saw that in me. I think I can play catcher at a high level. I just need a little refinement."

That may seem a bit ambitious. But to tell a 4.0 (grade point average) student in biochemistry who plans to be a doctor that he can't do something would seem to be unwise.

Illinois State's Paul DeJong reaches to catch a fly ball during a game last year at Duffy Bass Field in Normal. DeJong has emerged as one of the Missouri Valley Conference's top hitters while displaying unusual versatility.