CHAMPAIGN — By the time the first media timeout came on Tuesday, Illinois had already dug itself a hole.

Missed shots. Flat offense. Turnovers. A lack of closeouts on shooters. The Illini ran the gamut of mistakes in a flat start to the game. When there was 15:47 left in the first half, Illinois was 1-of-5 with three turnovers and Michigan State, Tuesday night's opponent, was 4-of-7 with three 3-pointers and no turnovers and held an 11-3 lead.

Not that it got much better after that. All told, the Spartans ran the lead up to 20 points early in the second half before Illinois frantically cut the lead and briefly took it from the Spartans only to lose by one-point. That's the kind of start No. 22 Illinois needs to avoid at 3:30 p.m. Saturday at Rutgers if the team intends to snap a three-game losing streak and hand Rutgers its first home loss this season.

Illinois coach Brad Underwood said sophomore guard Ayo Dosunmu is "day-to-day" after suffering a knee injury with "no structural damage" at the end of Tuesday's game.

"He's done some work," Underwood said when asked if Dosunmu has practiced. The coach added Dosunmu will travel to Rutgers.

Underwood said he's yet to figure out why the Illini has been struck by slow starts.

"Our team walked in before the game and I literally asked the coaches after they left, I said, 'Are we ready?' It was almost like a somber funeral," Underwood said after Tuesday's game. "Before the Maryland game, we were probably too high. We were through the roof. We played like it in the first half, not to take anything away from Michigan State."

Slow starts have popped their ugly head this season, but until Tuesday hadn't been much of an issue recently.

After that game, the players vowed a change was afoot and that slow starts weren't coming along with them for the rest of the season's ride — one that has the Illini in the mix to make the NCAA Tournament for the first time since 2013. That's what made Tuesday's start even more of a surprise.

“I have no idea why we had a slow start, to be honest," center Kofi Cockburn said. "We have a really bad reputation of doing that, starting the game off slow."

A kind of slow start like that against Rutgers at the Rutgers Athletic Center  won't go over as well. The energetic crowd from the State Farm Center on Tuesday that helped Illinois claw back in the game will be replaced by fans and a team that are trying to protect a 16-0 home record this year.

Illinois will see guard Geo Baker, who missed the game in Champaign as he recovered from an injury. He's averaging 11.2 points for a team that wins with the 11th-best defensive efficiency in the country, according to KenPom.

Illinois' start to the game, of course, will hinge on who starts for Illinois.

Underwood's starting lineup has been set in stone recently, but Dosunmu's potential absence will obviously shake things up, and the struggles from sophomore Giorgi Bezhanishvili could really throw a wrench into what has been a steady starting five.

Perhaps Alan Griffin, who has been instrumental off the bench, moves into the lineup. Underwood could also keep things as close to normal as possible and simply sub Feliz into the lineup for his first start since that Miami game.

The University of Pittsburgh football and men's basketball programs have been placed on probation for three years by the NCAA for a series of level II violations between 2015 and 2018.

Here is Sunday's College Basketball: No. 25 Ohio State turns back No. 9 Maryland

Cassius Winston scored 19 of his 20 points in the second half and Rocket Watts matched a career high with 21 points, helping No. 24 Michigan S…

Return of the Hoosier: Bob Knight back at Indiana after 20 years

Wheaton edged Illinois Wesleyan on a 3-pointer at the buzzer.

The Eureka College men's basketball team received 27 points from Ian Millsteadt, but lost to Webster, 88-79, at St. Louis on Wednesday. 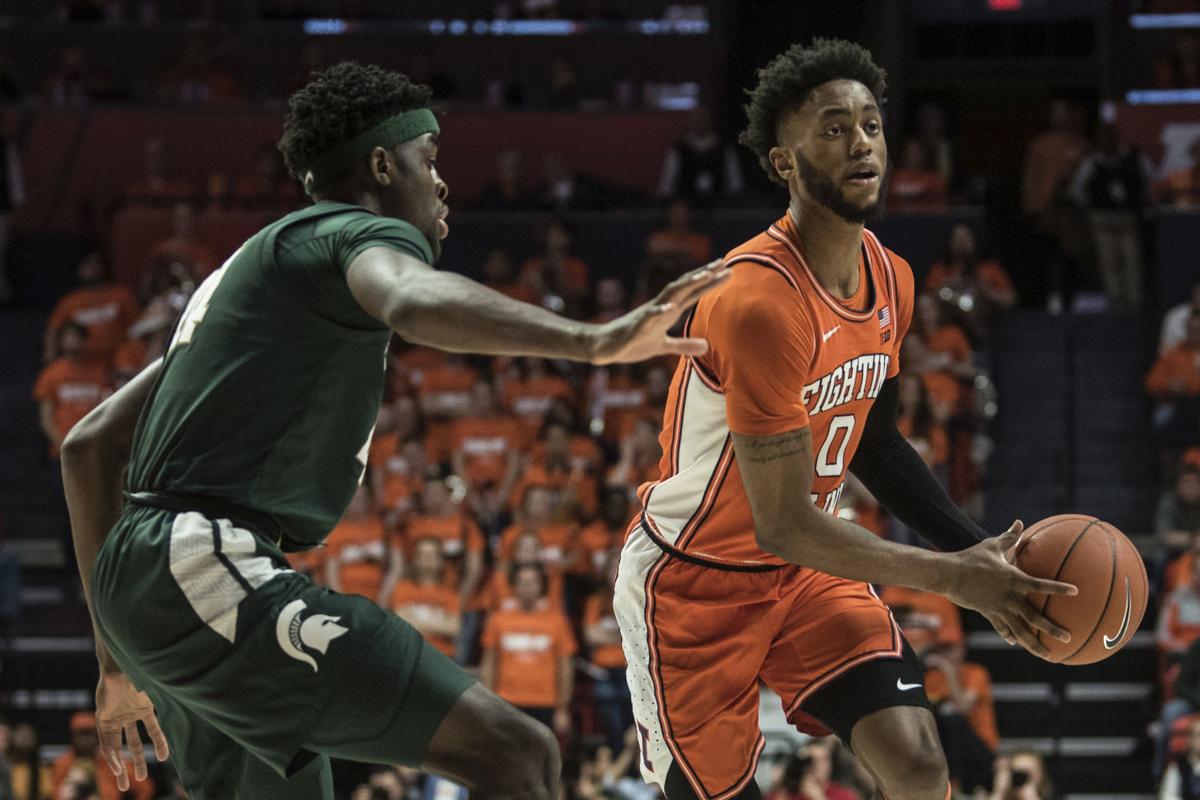 Illinois' Alan Griffin (0) looks to pass as he is pressured by Michigan State's Gabe Brown (44) in the first half on Tuesday.