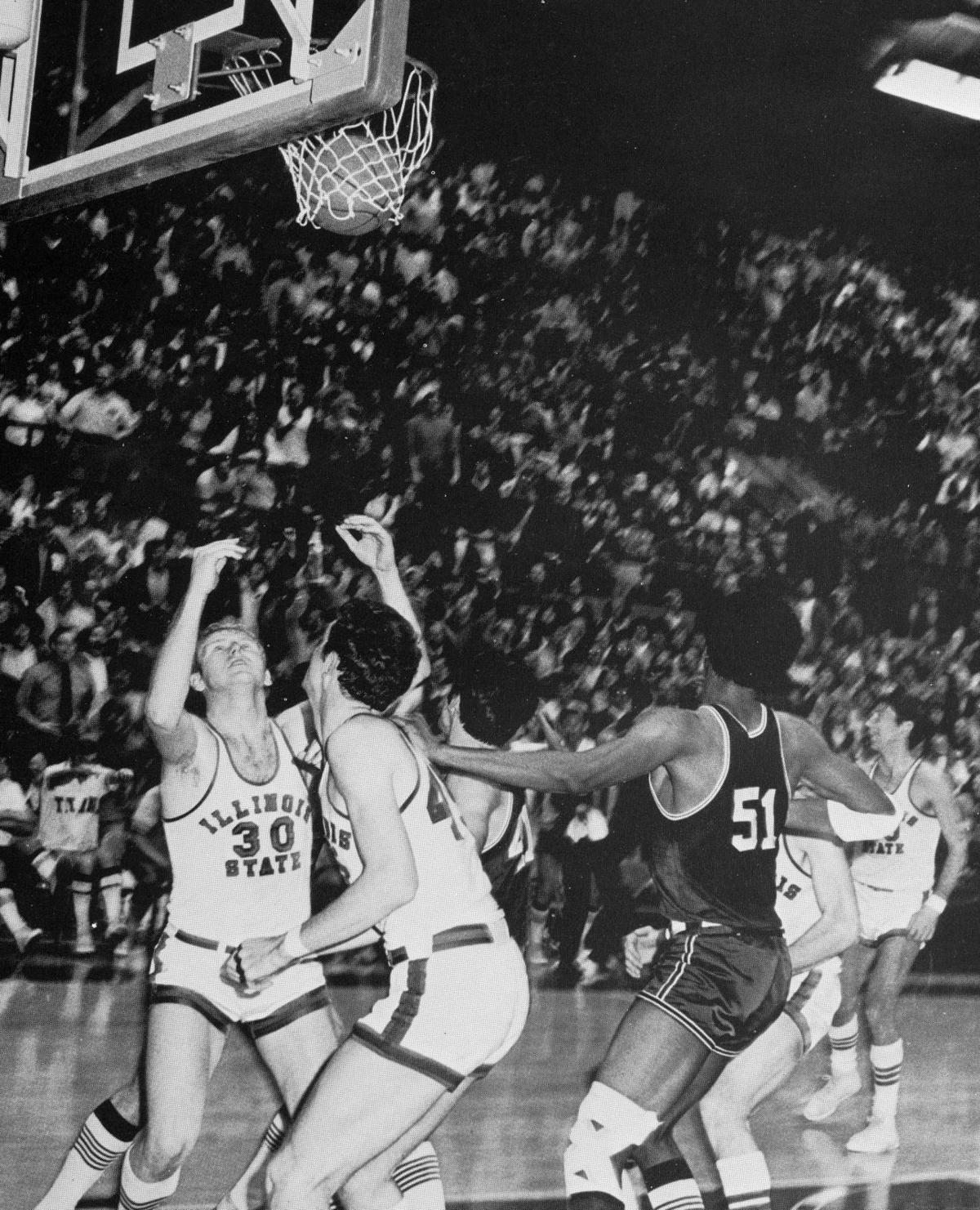 Tom Gramkow's shot goes through the hoop to provide the winning points as Illinois Wesleyan edges Illinois State, 69-68, at Horton Field House on Jan. 13, 1970 in the final basketball game between the schools. IWU will celebrate the 50th anniversary of the win Wednesday night in conjunction with the Titans' 7 p.m. home game against North Park.

The area between the free throw line and the top of the circle is a short distance. For Tom Gramkow, it was precious real estate.

"I shot a lot of shots from there in my four years at Wesleyan," Gramkow said.

Enough went in for Gramkow to amass 1,418 points as a Titan, 15th-most in school history. One that went in has a life all its own.

Gramkow's shot as time ran out on Jan. 13, 1970 touched a lot of rim at Horton Field House. It hit the front of the rim, the back and, finally, trickled through the net.

The senior captain's buzzer-beater gave IWU a 69-68 victory over Illinois State in the final basketball game played between the schools, capping a series that spanned 111 games and 61 years.

"It was a good way to end it," Gramkow said. "When it happened, you never thought 50 years later people would still be talking about it. But for a lot of people in Bloomington-Normal, that (the series) was a pretty big deal."

The deciding hoop is "The Shot" at IWU. It's been called a lot of things at ISU, none printable.

Wesleyan will celebrate the 50th anniversary of the victory Wednesday when the current Titans play host to North Park at 7 p.m.

Gramkow and several other players from the 1969-70 squad will be at Shirk Center along with former IWU coach and athletic director, Dennie Bridges. The first 300 fans receive a commemorative poster.

Bridges coached 986 games and won 667 in his fabulous 36-year Titan coaching run. In regard to that crosstown contest 50 years ago Monday, he said, "I remember it like it was yesterday."

Bridges can tell you that ISU's Greg Guy hit a shot to put the Redbirds ahead by a point with seven seconds left. The Titans called a timeout and Bridges decided to "let Tom go down and create his shot."

Gramkow knew where to find it.

"We took it out on the sideline, so I tried to get over to my spot where I felt comfortable," he said. "When I let it go, I thought it was a swish. When it hit the rim, my heart fell for a second. But then it went in."

Those in an overflow crowd listed at 7,000 let out cheers and groans, depending on allegiance.

The neighboring schools had played twice per season in Gramkow's first three years at IWU. The January meeting was the only one in the 1969-70 campaign.

ISU was moving to Division I the next season and was ready to move on from IWU.

"Part of the deal was they said they didn't have room on their schedule for a non-Division I team," Bridges said. "It was controversial. I was a young coach. It was like my fifth year at Illinois Wesleyan. I was outspoken that we shouldn't quit playing. I had quite a bit of support, even from ISU fans. They didn't want to give it up."

Redbird athletic director Milt Weisbecker hired Will Robinson as head coach later in 1970. Bridges recalls Weisbecker saying to him "that in effect we're doing you a favor because as we go Division I, we'll make you want to quit (playing)."

"It wouldn't have happened for a few years because three years later we had Jack Sikma," Bridges said of the recently inducted Basketball Hall of Famer. "But they had Doug Collins and then Bubbles Hawkins and Jeff Wilkins, so it would have been really hard for us."

Ah yes. Doug Collins. He was at Horton on Jan. 13, 1970, but was on the freshman team at a time the NCAA prohibited freshmen from playing on the varsity. He played in the freshman preliminary game won by IWU.

Collins went on to score 2,240 points over the next three years and become the first pick of the 1973 NBA Draft. On this night, he could only watch IWU celebrate Gramkow's shot.

Bridges said he was going to suggest that Gramkow "put on a uniform and reenact it" Wednesday night.

Don't be so sure it won't happen, though the uniform is unlikely.

"Actually, I was in the gym today (Monday)," said Gramkow, a retired State Farm agent. "I've been shooting around the last few weeks. I tried that shot. It's really hard to square up now. But at least I tried it."

The end of the series quelled what had been an intense IWU-ISU rivalry. Bridges said an offshoot was that eventually, many people became fans of both teams.

In 1970, you were attached to one or the other, and Gramkow said IWU coaches at the time — Jack Horenberger, Bob Keck, Don Larson, Bridges — reminded the players frequently of what beating ISU meant.

"Over the years the idea was 'Why aren't we playing?'" Bridges said. "For lots of reasons, it just never happened. At the time, I really wanted to keep playing. Later, after we didn't play them for a while, I thought the idea of playing maybe wasn't a good idea."

Thus, the series has remained dormant. It's likely to stay that way.

Gramkow's shot is alive and well.

"It's kind of cool to have good memories like that," he said.

The Olympia girls basketball program is off to a 15-3 start this season and on Tuesday received votes in the Associated Press Class 2A state poll.

Kindred: Should Tom Brady, Drew Brees continue to play a violent game? No, but they will

Now would be a good time for 40-somethings Tom Brady and Drew Brees to walk away from a violent game. Too bad they won't.

Tom Gramkow's shot goes through the hoop to provide the winning points as Illinois Wesleyan edges Illinois State, 69-68, at Horton Field House on Jan. 13, 1970 in the final basketball game between the schools. IWU will celebrate the 50th anniversary of the win Wednesday night in conjunction with the Titans' 7 p.m. home game against North Park. 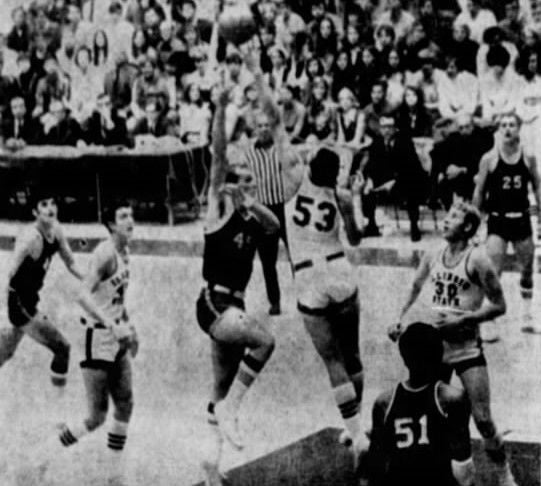 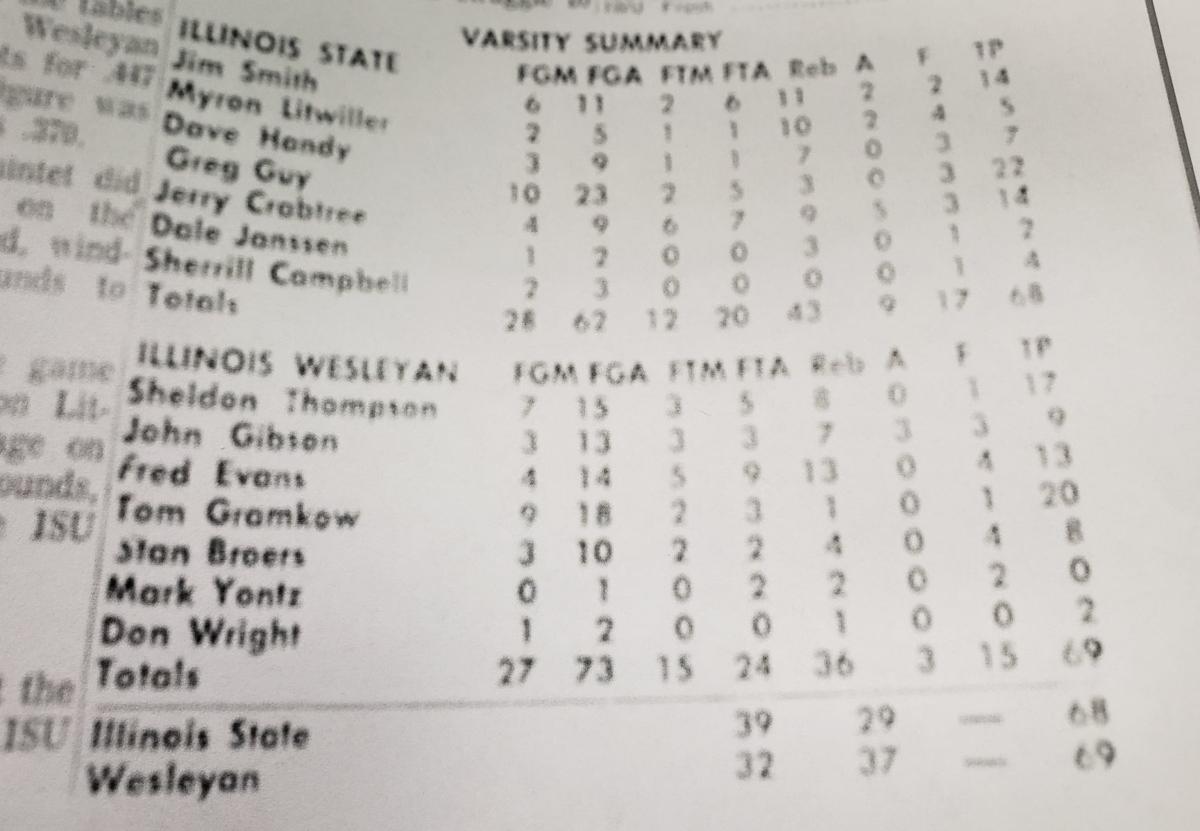 The box score from Illinois Wesleyan's 69-68 victory over Illinois State on Jan. 13, 1970 in the last basketball game played between the schools.