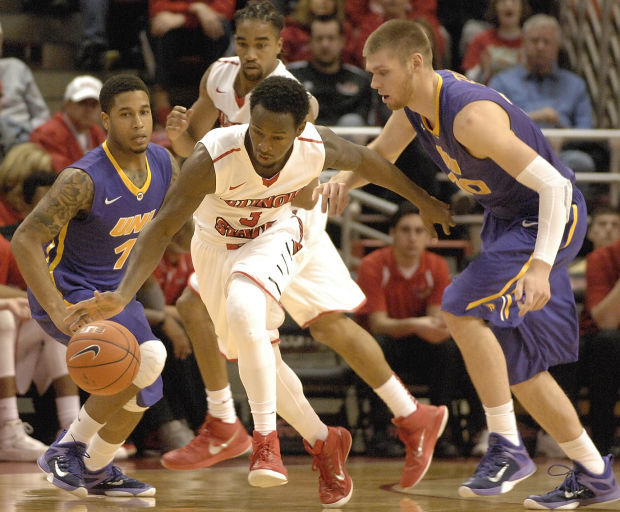 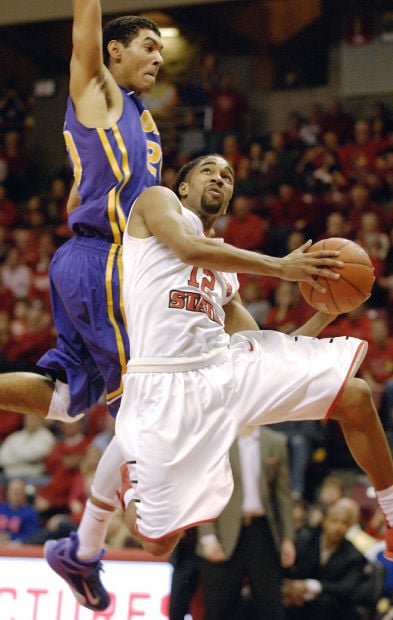 Illinois State's Tony Wills (12) goes around Northern Iowa's Jeremy Morgan (20) Sunday in the game at Redbird Arena. Despite having a double-digit lead at one time, the Redbirds lost by 1 point. 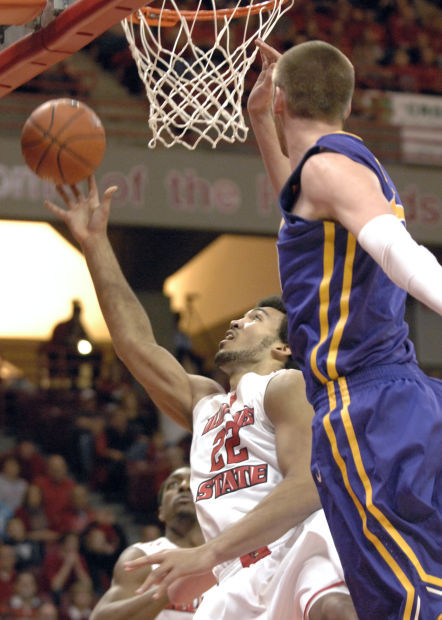 NORMAL — The sting of a bitter 54-53 loss to No. 20-ranked Northern Iowa at Redbird Arena was still etched on Daishon Knight’s face Sunday. Yet the Illinois State senior guard said he was sure of one thing.

Knight, who missed a potential game-winning shot at the buzzer, quickly answered whether such a gut-punching defeat — in which the Redbirds led by 12 midway through the second half — will be difficult to bounce back from.

“Not if you have good leadership on your team,” said Knight. “You don’t let any of your players get down. You put this one in the past, learn from it on film and move to the next one.”

Nate Buss’ 3-pointer from in front of UNI’s bench with 5.2 seconds left, which came after Knight missed the front end on a one-and-bonus, gave the Panthers the Missouri Valley Conference victory before a disappointed crowd of 6,118.

After Buss’ basket, ISU coach Dan Muller called a timeout to get the ball into Knight’s hands. Knight moved down the court and all the way down the lane, but his attempt hit the front of the rim as he went crashing to the floor. Muller screamed for a foul, but to no avail.

What Muller was sure about was UNI’s switch from its standard man-to-man defense to a seldom-used 3-2 zone caught ISU (12-8, 4-4) totally by surprise.

Three-pointers from Paris Lee and Bobby Hunter helped ISU go on a 20-3 run that turned a 31-26 deficit into a 46-34 lead with 10:45 left. At that point, UNI coach Ben Jacobson went to the zone that he later said the Panthers (18-2, 7-1) might have used for a couple possessions in nonconference games, but not at all in the previous seven Valley contests.

With 6-foot-5 Jeremy Morgan on the front of the zone, the Redbirds struggled. ISU missed 11 straight shots and committed three turnovers in a six-minute stretch as UNI roared back with 11 straight points.

“It got us stagnant,” said Muller of the zone. “I didn’t do a good enough job of helping our guys in that offensively.”

Morgan missed a 3-pointer with 14 seconds left and Knight was fouled on the scramble for the rebound. Knight, who came into the game shooting 84.1 percent at the line, missed the free throw as Tuttle grabbed the rebound.

Jacobson decided against a timeout as guard Wes Washpun found Buss open outside the arc.

“It was fortunate for our team they missed the free throw,” said Jacobson. “I give Wes and the guys credit for making a play and running it down and finding a guy and being aggressive and shooting the first good shot we had.”

“That’s a shot I’ve taken thousands of times,” said Buss. “I was in rhythm and I felt like I was open, so I put it up.”

Hunter made three-of-five 3-point attempts and led ISU, which made 34.4 percent from the field (21 of 61), with 13 points. Reggie Lynch and Lee, who returned after a one-game absence with a knee injury, added 12 points each.

“It was kind of tough passing the ball over one of the tallest guys on the court,” said Lee. “It kind of bothered us, and they were able to make a run and win the game.”

Knight had scored 20 or more points in three straight games, but finished with nine points on 4-of-16 shooting.

“He did not have a typical game he’s had for us. But he still made big plays,” said Muller of Knight. “He was a little frustrated tonight. But I’ll certainly take him up two at the line with however much time was left any day of the week.”

Muller said he did not know the severity of a leg injury to forward MiKyle McIntosh that happened late in the game. ISU faces Missouri State at 7 p.m. Wednesday at Redbird Arena.

The Redbird coach, who admitted the day before this was a “barometer” game for his team, knows he might have to be part psychologist for the next couple of days.

“These games can have an effect on players. We’ll talk about it and get past it,” said Muller. “We can’t let it affect us ... I remember as a player these games are hard. Those guys care a lot about what they do and they put a lot into it.

“To have an opportunity like that and feel like you kind of let it go, those are hard.”

Offense: C: ISU shot 34.4 percent from field against one of nation’s stingiest defensive teams and struggled against rare UNI zone. The Redbirds did snag 16 offensive boards.

Defense: B--: The Redbirds forced 16 turnovers against a team averaging 11 per game and did enough defensively to win the game.

Overall: B--: ISU let a great opportunity to beat a ranked team slip through its fingers. This might linger for a while, but Redbirds need to get over it quickly before home game against Missouri State on Wednesday.

To view a photo gallery of the game, go to www.pantagraph.com

Illinois State's Tony Wills (12) goes around Northern Iowa's Jeremy Morgan (20) Sunday in the game at Redbird Arena. Despite having a double-digit lead at one time, the Redbirds lost by 1 point.