Watch now: No. 5 Illinois has put Minnesota in the rearview as Michigan State begins challenging stretch
0 comments
Share this
{{featured_button_text}}

CHAMPAIGN — After consecutive home losses to Maryland and Ohio State, Illinois head basketball coach Brad Underwood made his one and only starting lineup change this season, substituting Jacob Grandison for Da'Monte Williams against Penn State on Jan. 19.

Since then, the Illini have won seven consecutive Big Ten games, culminating with a 31-point blowout win against Minnesota. Grandison has seen an increase in his minutes over that period, and against Minnesota he scored a season-high 12 points and four assists.

"I'm just doing my assignments. The whole team has been trying to win and we have been winning," Grandison said. "I don't take any credit for that. We are just five guys on the floor at a time playing our basketball."

The win was all the more impressive at Minnesota's The Barn, which had tripped Michigan State, Ohio State and Iowa.

"Everyone who has played in basketball has played in a game where everything went their way and it was a really good win. I had just gotten subbed out and I thought to myself, 'This is really fun,'" Grandison said. "It was maybe the most fun we had in a game across the board. Everyone got to play and everyone played well. If started with our defense and it was great to see how everyone was connected."

The joy felt from the Minnesota win has quickly turned into preparation for the hardest stretch of basketball the team will face this season. Four games in eight days — Tuesday at Michigan State, Thursday vs. Nebraska, Saturday at Wisconsin and Tuesday at No. 3 Michigan — with No. 4 Ohio State waiting for the Illini on Saturday, March 6, to finish off the regular season.

With the team's tight schedule, the regular postgame film session after Minnesota was trimmed down.

"We showed two clips — a defensive rotation that was very impressive and a clip of a great baseline rotation — that both led to points in transition because of the efforts. With our schedule right now, we are hitting on some positives," Underwood said.

The end of the season grind is tougher on his players mentally than physically, Underwood said.

"You don't get the thrill or the emotion of enjoying the win and that little bit of success. As I say, you can enjoy your postgame meal. As soon as your postgame meal is over, it is post that game," Underwood said. "It is over now and you've got to shift. (The one day prep time) is one of the great challenges of the NCAA tournament and the Big Ten tournament."

"Coach mentioned to us their record in the Big Ten play and he said don't look at their record at all. It doesn't represent anything," Grandison said. "This is Michigan State. This is Tom Izzo. We have to respect that. There is definitely some juice behind a team with the history that they have and the legacy that there is there. At the end of the day, it is another Big Ten game on the road, and it is about us."

For Grandison, every college player faces the same physical challenges, but the mental challenges will serve the Illini well in the postseason.

"We know with the NCAA tournament it is a one-day prep, so this is a preview for that. It is what it is. We have to handle it," Grandison said. "It is more of a challenge mentally. Our bodies are just kind of used to the grind. You ask (any player) in the country and they are tired right now. But being able to remember (the scouting) one day then apply it, then remember another and apply it. That is definitely where the money is made."

No. 5 Illinois at Michigan State

OF NOTE: Michigan State leads the all-time series 63-60 and the Spartans have won the last two meetings. Illinois came up a point short in the last matchup 70-69 on Feb. 11, 2020. The Illini last won in East Lansing 59-54 on Feb. 7, 2015. This is the second year in a row that Illinois has won seven consecutive Big Ten games.

The frustration that Illinois head coach Brad Underwood feels towards the end-of-the-season schedule his No. 5-ranked team must negotiate before the Big Ten and NCAA Tournament was evident in the pregame new conference on Friday.

EAST LANSING, Mich. — Michigan State started its long string of NCAA Tournament appearances in the previous century by being the toughest team on the court in most games.

The Illinois men's basketball team got to experience what the future will look like without Ayo Dosunmu Thursday against Nebraska.

CHAMPAIGN — The Illinois men's basketball team announced junior point guard Ayo Dosunmu will not play in Thursday's home game against Nebraska because of a facial injury.

College basketball roundup: No. 3 Michigan holds off No. 4 Ohio State

Hunter Dickinson had 22 points and nine rebounds and Eli Brooks scored 17 as No. 3 Michigan held off a late flurry to beat No. 4 Ohio State, 9…

College basketball roundup: No. 13 West Virginia rallies from 19 down, tops No. 12 Texas

Sean McNeil and No. 13 West Virginia erased a 19-point deficit in the second half, then withstood a flurry of last-second misses to hold off N…

Watch now: As senior night arrives for No. 5 Illinois, Brad Underwood believes it is time for Ayo Dosunmu to go to the NBA draft

CHAMPAIGN — The Naismith Memorial Basketball Hall of Fame announced this week that Illinois basketball's Kofi Cockburn and Ayo Dosunmu have been named finalists for the Kareem Abdul-Jabbar Center of the Year Award and the Bob Cousy Point Guard of the Year Award, respectively. 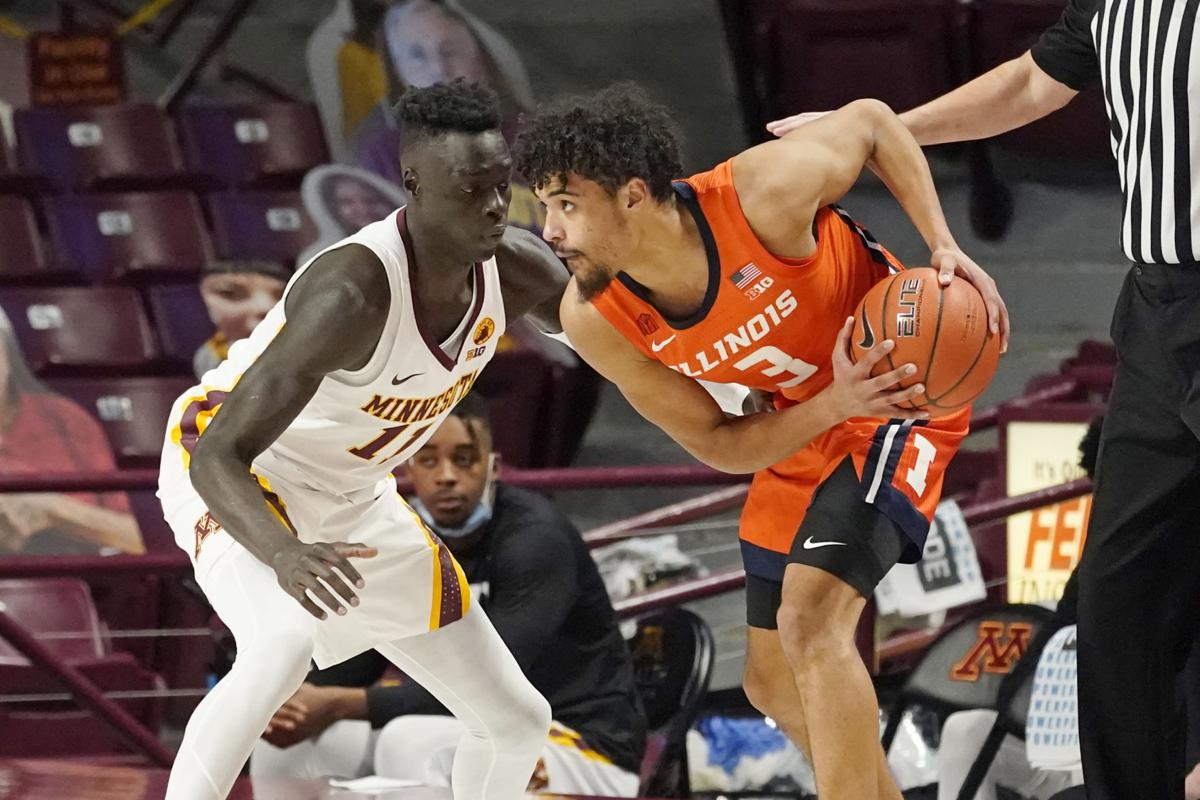 Illinois' Jacob Grandison (3) ponders his move as Minnesota's Both Gach (11) defends in the first half on Saturday. 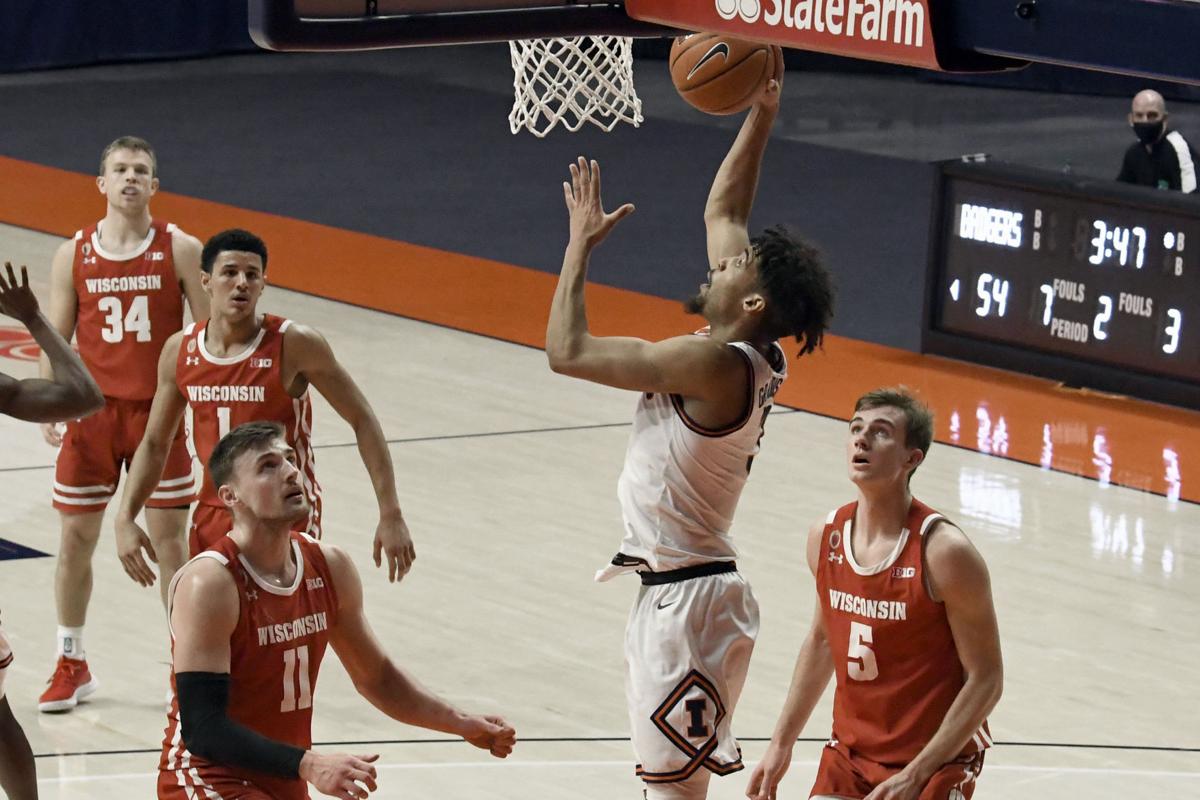 Illinois guard Jacob Grandison puts up a shot against Wisconsin in the second half on Feb. 6. 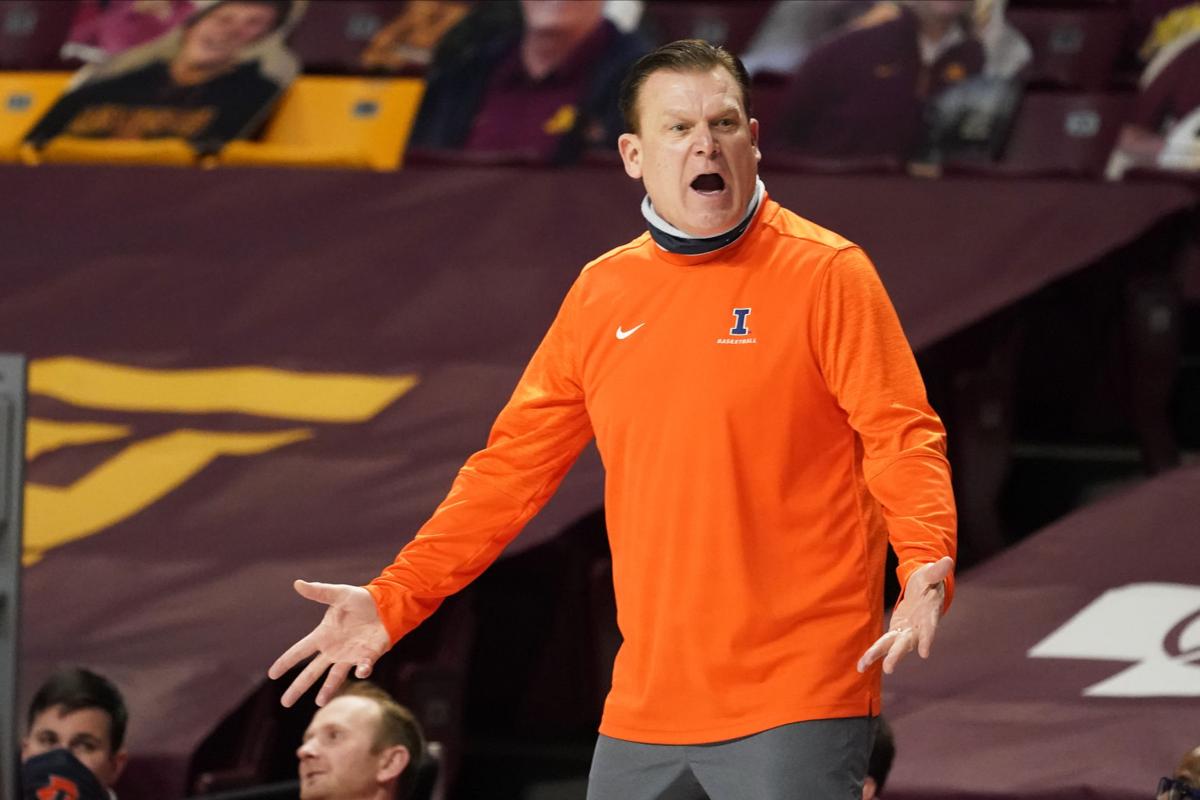 Illinois head coach Brad Underwood questions a call in the second half against Minnesota on Saturday.