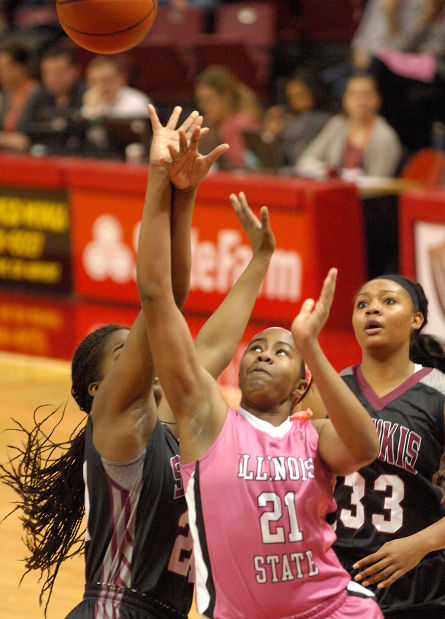 Illinois State's Zenobia Bess (21) shoots and draws a foul from Southern Illinois's Kim Nebo (24) as Azia Washington (33) watches the action at Redbird Arena on Sunday in Normal. The Redbirds won in overtime. 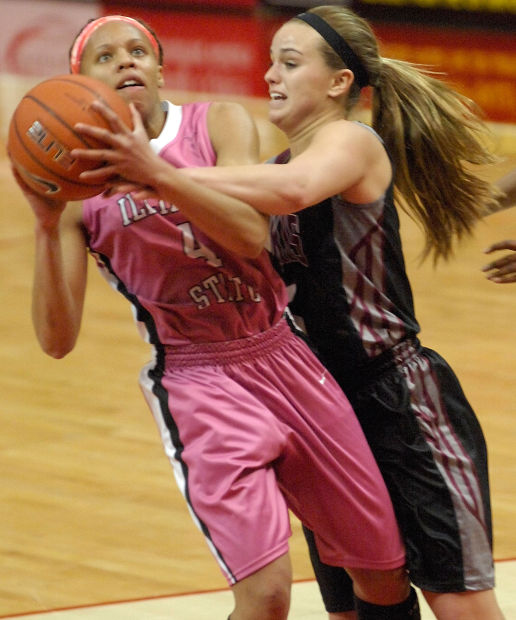 Illinois State's Chloe Nelson (4) looks to score and but gets wrapped up by Southern Illinois's Hannah Shores (5) during their Missouri Valley Conference game Sunday at Redbird Arena.

NORMAL — Chloe Nelson’s five points in the final minute of regulation were rendered insufficient for victory when Southern Illinois’ Mercedes Griffin tossed in a well-guarded 3-pointer at the buzzer to force overtime.

All the Illinois State senior guard could do was regroup and do it again.

Nelson and freshman Zenobia Bess each scored four points in the extra session Sunday as the Redbirds escaped with a 68-63 Missouri Valley Conference win before a Play 4Kay crowd of 1,851 at Redbird Arena.

“I’ll credit Southern for doing a good job battling back,” Nelson said. “You’ve always got to be about what’s going on next and keep fighting. You have to keep realizing you are in the game and have a chance to win.”

The Redbirds coughed up a 15-point cushion in the final seven minutes of regulation and trailed briefly before proceeding to 7-15 overall and 6-6 in the MVC.

“I credit our fight tonight. The fact was we were not going to go down on our homecourt,” said ISU coach Barb Smith. “Chloe’s poise at the end of the game meant so much.”

Bess opened overtime with an inside bucket and Nelson connected on a jumper from the wing. The quick hands of Lindsay Smith led to two Southern turnovers in the final 1:30, and two Nelson free throws at the 1:12 mark banished the Salukis to 4-20 and 2-11 in league play.

“I see Illinois State used all 11 kids. I wish I had 11. I think we just ran out of gas in overtime,” said Southern coach Cindy Stein, who played nine and used all five starters for at least 36 minutes. “I can’t say enough about Chloe Nelson. I love that kid. She’s kind of their heart and soul and you could tell.”

The Redbirds broke from a 32-32 tie with a 19-4 surge that featured seven points from freshman Kalyn Gebhardt and 3-pointers off the fingers of Mackenzie Freeman and Katy Winge.

Southern closed within 51-47 on a Griffin 3-pointer at the shot clock buzzer and led 54-53 after two Azia Washington free throws at the 1:19 mark.

Nelson, who topped ISU with 18 points, snapped a 56-56 tie on a 14-footer from the left wing while being jostled and completed the three-point play with 15.8 seconds showing.

“I just wanted to attack. You have to have a no fear attitude,” Nelson said. “Shots weren’t going for us, but we still have to take ‘em when your name is called.”

The Redbirds guarded Southern’s final possession of regulation well only to watch Griffin swish the game-tying 3-pointer with a Taylor Stewart hand in her face.

The Redbirds prevailed despite 35.9 percent shooting.

“I felt like there were caps on the baskets,” Barb Smith said. “We had great shots. We were just missing them.”

Watch now: NCHS senior Mitch Murphy gets final out for 2nd save of day

Watch now: NCHS senior Mitch Murphy gets final out for 2nd save of day

Illinois State's Zenobia Bess (21) shoots and draws a foul from Southern Illinois's Kim Nebo (24) as Azia Washington (33) watches the action at Redbird Arena on Sunday in Normal. The Redbirds won in overtime.

Illinois State's Chloe Nelson (4) looks to score and but gets wrapped up by Southern Illinois's Hannah Shores (5) during their Missouri Valley Conference game Sunday at Redbird Arena.