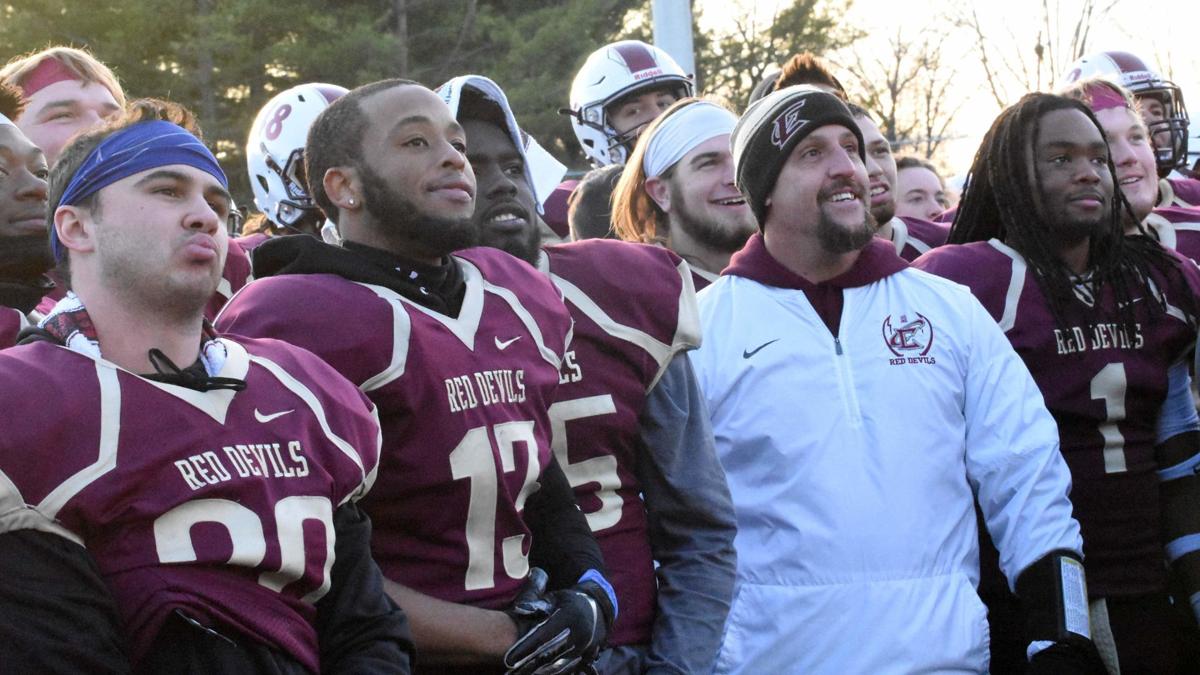 Kurt Barth stands with his team during a Eureka College football game at McKinzie Field. Barth will pass Eureka College legend Ralph McKinzie on Saturday for most games as the Red Devils' head coach. 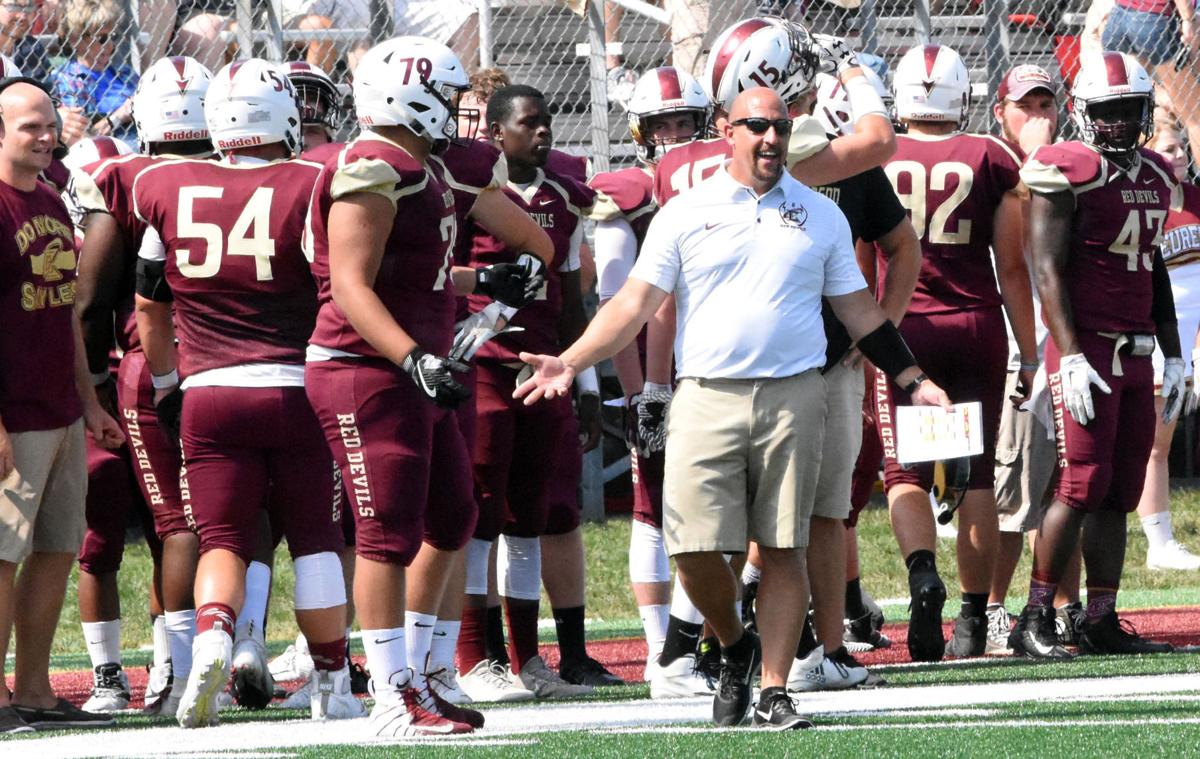 Football history at Eureka College intersects with American and world history. It is that way in large part because of Ralph McKinzie.

When you play or coach football at Eureka, you hear a lot about McKinzie, who in the late 1920s and early ‘30s coached an offensive lineman named Ronald Reagan. Kurt Barth is a former All-American receiver for the Red Devils and their current head coach, so yes, he’s heard stories of McKinzie’s impact.

“The story was that Ronald Reagan’s sophomore year, he wasn’t going to come back,” Barth said. “He was on campus just to drop his girlfriend off and was going to go home. Coach McKinzie saw him and convinced him to stay. He said, ‘You’re one of my guys. I’ve got a jersey for you.’ Reagan decided to come back and that ultimately changed the course of history.”

That’s the kind of cachet McKinzie carries at Eureka, more than 30 years after his death at age 96. The Red Devils play their home games at McKinzie Field. Reminders of him are everywhere.

“He changed lives in the world,” Barth said.

He did it through Reagan, a two-term president who always held Eureka College and McKinzie dear to his heart. To have a place alongside McKinzie, be mentioned in the same breath with him, is big-time stuff for a Eureka alum.

That’s where Barth finds himself.

In his 12th season, he tied McKinzie last week for the most games as Eureka’s head coach. Barth’s 116th game was a 48-29 win over Rockford at McKinzie Field. On Saturday, he will pass McKinzie when the Red Devils end their abbreviated spring season at Concordia (Wis.).

“There are several alums who talk about him quite often. Guys from the 70s and 80s are starting to be more involved with the program. They talk about Coach McKinzie and then Doc Traister and Warner McCollum,” Barth said.

“Coach McCollum was the reason I stayed at Eureka for four years (as a player). And over the past 12 years before Doc passed away this fall, I was able to establish a great friendship with him. To be in the same seat those guys had is quite an honor.”

Barth already is the winningest football coach at Eureka. He earned that distinction in 2016 during an 8-2 season. His 62-54 record includes conference championships and NCAA Division III playoff berths in 2017 and 2018.

A victory Saturday would give the Red Devils five straight winning seasons. That would be a first in the program’s 117-year history.

“I talked to our guys about that,” Barth said. “There is still a lot to play for. This may not be the conference championship that we wanted to be in, but you still have an opportunity to do something that hasn’t been done in the program.”

For perspective on five straight winning seasons, consider this. When Barth was hired, the Red Devils had gone 19-81 in the previous 10 years, including 0-10 in 2006. His predecessor had resigned during the 2008 season.

Barth inherited a small roster and bulked it up to 58 players by the time practice began in 2009. Over the past five years, Eureka has been “averaging 89, 90 players” annually, Barth said.

His goal when he took the job was to build a 100-man roster. He still has that in mind— a tall task at a school with an enrollment of 513 — but first would like to get to 94.

That was the most Traister had during his tenure as head coach. He often said that if Barth got to that number, they would go have a steak dinner. Traister died in November at age 101.

“I’m hoping this year in his honor we can hit that mark (in the fall),” Barth said. “He’ll be looking down and be happy with that.”

Barth looks around and sees “Eureka people” at every turn in his coaches’ meetings. That is by design. His staff is made up almost entirely of former Red Devils.

Barth was a teammate of defensive coordinator Deric Linder, while others on the staff, including former star quarterback Sam Durley, have played for Barth at Eureka.

“With our setup, I’m the only full-time football coach. Guys have part-time jobs and are doing other things,” Barth said. “In most setups like that, those guys are going to turn over every other year or maybe three years if you’re lucky. But most of these guys have been with me since I started and the others have been at least six years.

“You have to keep those people together and share the same vision. We have that. They’ve been through it, they understand the ins and outs of the college and our program and it means something to them. That’s why they’ve stayed. That’s why we’ve been able to have success.”

When Barth was hired as head coach in December 2008, his first call was to Crouch, a former Normal Community and Illinois State offensive lineman. Crouch’s Washington program has sent some standout players to Eureka.

“Darrell is still a great mentor for me,” Barth said. “He’s really helped me through the process and prepared me. We have a great relationship.”

Relationships matter to Barth, who before becoming a three-time All-American at Eureka was a multisport star at Fieldcrest High School. He invests in his players as people, and while the return on that includes wins, there is far more.

Sunday, he had a FaceTime with former All-American running back Le’Anthony Reasnover, who is in Finland after signing to play with a pro team there. He also is in regular contact with Nick Lindsey, a senior during Barth’s first season. Lindsey is now head football coach and athletic director at Arcola.

They are among many former players who call, text and email Barth, or celebrate his program’s successes via social media.

“If you’re going to be successful in anything, you have to build relationships,” Barth said. “That’s especially true in a team sport like football. One person can’t do the job and be successful. You need a whole group together. For me, that’s been the most rewarding part of these 12 years.”

Here’s hoping for many more. McKinzie would like that.

So would his former lineman.

20 Bloomington-Normal restaurants from the past

20 Bloomington-Normal restaurants from the past

If you enjoyed this...

Normal West head baseball coach Chris Hawkins back on the field after last season was canceled and keeps finding strength through Bible readings.

Kindred: Before Bradley or the NBA, Stan Albeck brought glory to Chenoa as ‘the kid from down the block’

Wearing No. 70 on the basketball court, Stan Albeck was a hero to Gene Jontry and other kids in Chenoa. Albeck never forgot about his hometown while coaching in the NBA and Bradley.

A Ronald Reagan bobblehead and paper doll books of Ronald and Nancy Reagan are among items in the new museum display.

Kindred: Bill Kennedy’s story? A softball man with a soft heart, a sense of humor and, always, the right words

Former Illinois State pitching coach Bill Kennedy had a profound effect on many.

Death at 24 is too soon. It seemed particularly premature for Blake Cowden, a natural leader who relished the role and the responsibilities th…

The catchy little ditty has replayed often as the fingers danced across the keyboard. Even in the face of tight deadlines, the tune served as …

Kurt Barth stands with his team during a Eureka College football game at McKinzie Field. Barth will pass Eureka College legend Ralph McKinzie on Saturday for most games as the Red Devils' head coach. 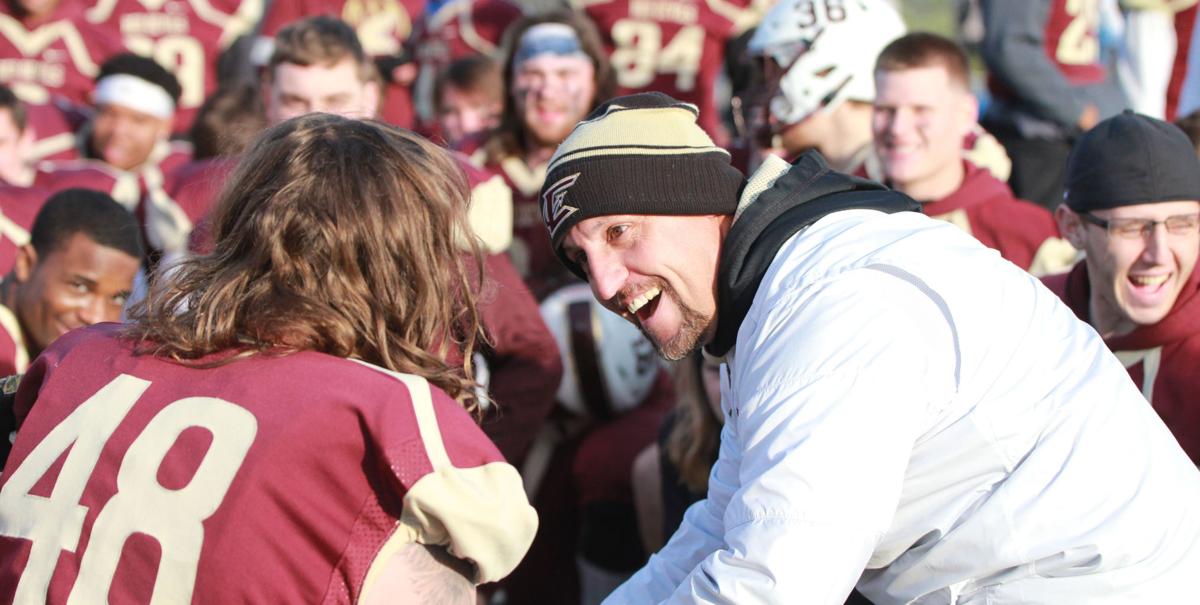 Eureka College football coach Kurt Barth, who is in his 12th season at his alma mater, talks to one of his players following a game.