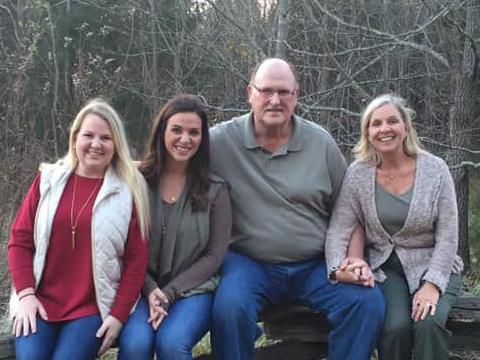 From left, Kelsey, Taylor, Denver and Danita Johnson pose for a family picture. 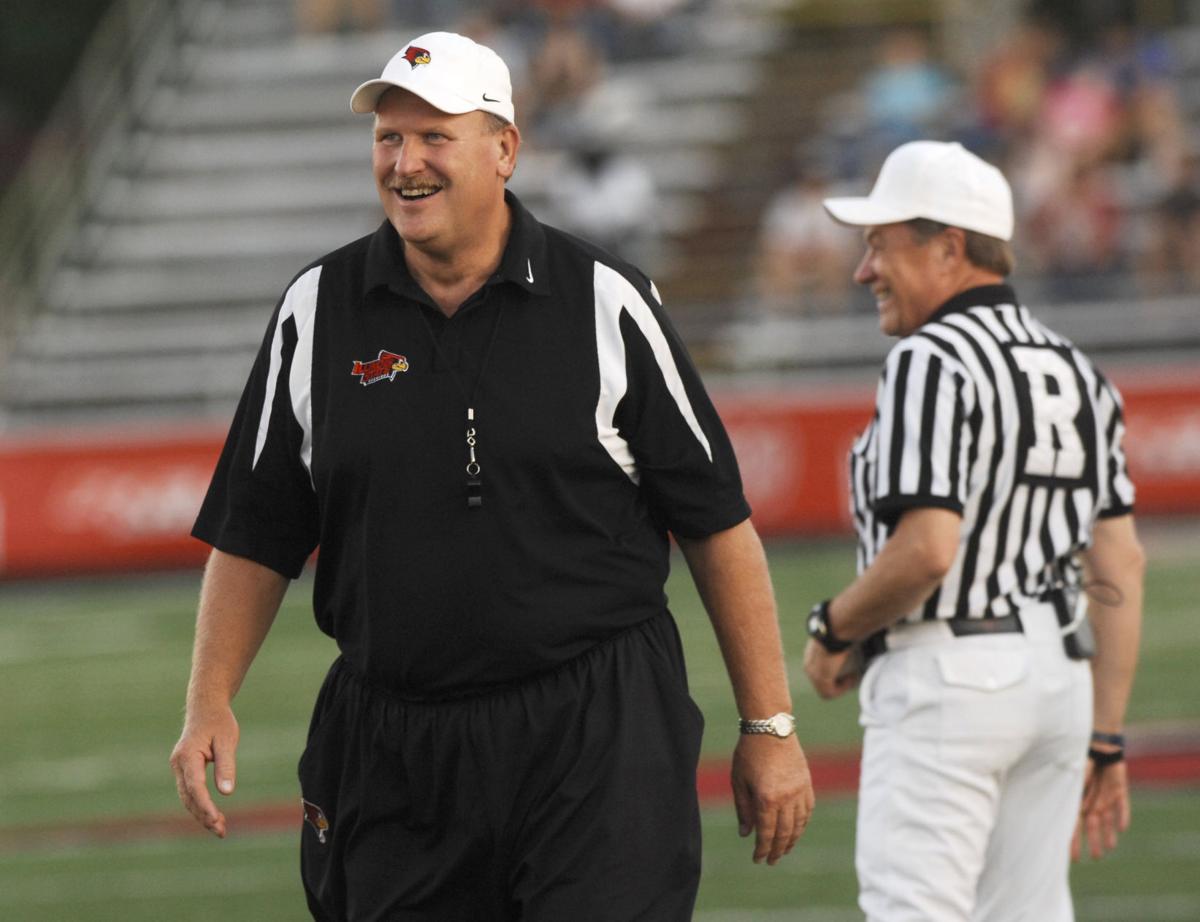 Illinois State's head football coach Denver Johnson walks on the field during the Red and White Scrimmage in August 2008 at Hancock Stadium in Normal. 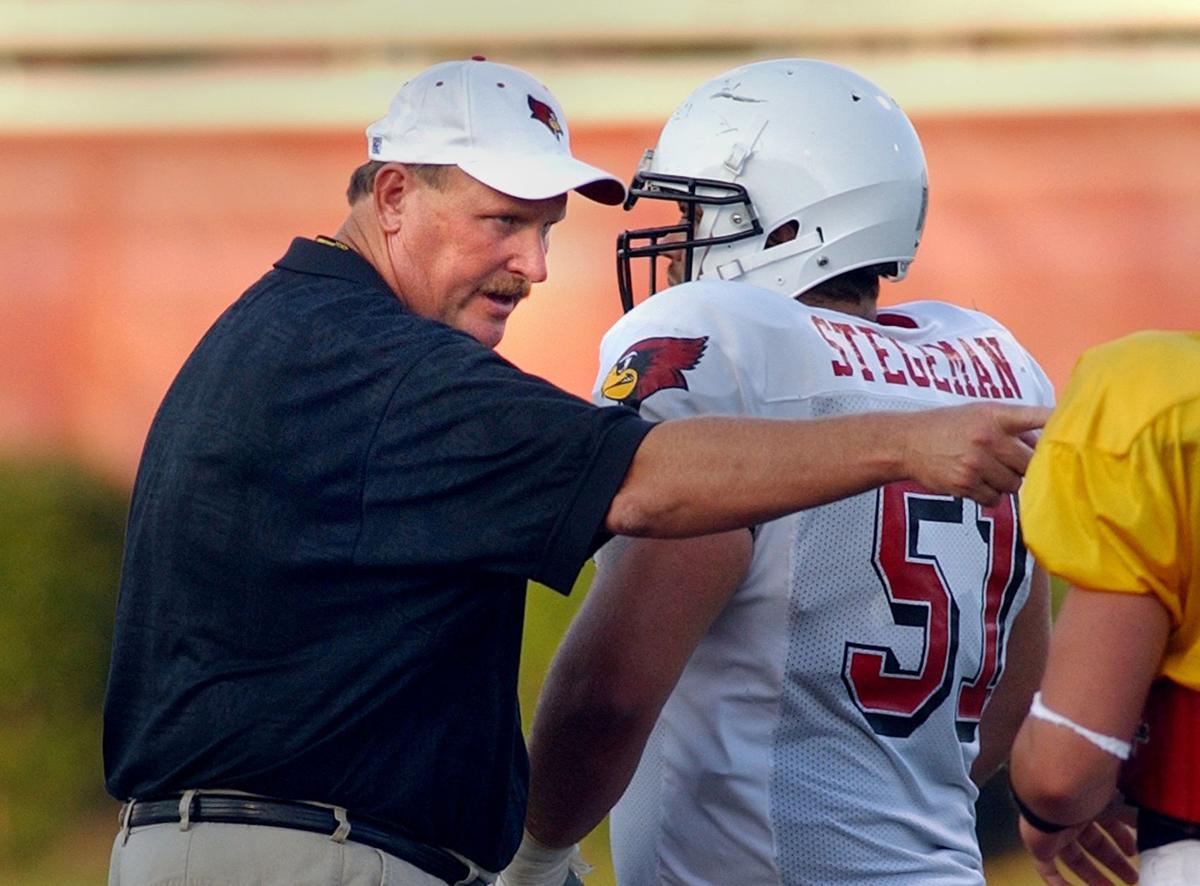 Denver Johnson, ISU football coach, revs up the start of the 2005-2006 football season during the intrasquad contest in August 2005 at Hancock Stadium. 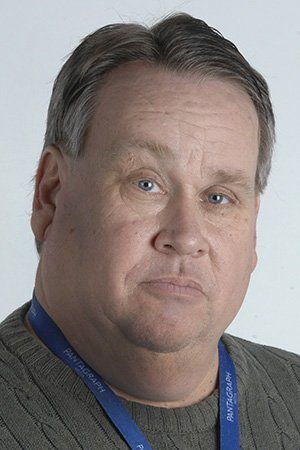 Danita Johnson had an exceptional memory.

“We would send 300 to 400 Christmas cards and over 200 of them she would address from memory,” said her husband and former Illinois State football coach Denver Johnson. “It was incredible.”

That memory slowly slipping away was one agonizing component of Danita’s long and torturous battle with Alzheimer’s disease.

Denver’s wife and the mother of Taylor Lingle and Kelsey Johnson was 62 years old when she died on May 30.

“She hadn’t called me by name for a couple years there at the end,” Johnson said. “It was just awful.”

His wife’s ordeal has consumed much of Johnson’s time and energy since he left ISU after the 2008 season.

“It was about a 10-year grind. I look back and the beginning of this was when we were still in Bloomington-Normal,” said Johnson. “The things she did didn’t make you think of Alzheimer’s, but she started to struggle with some things.”

“It went on like that for several years, and she continued to get worse,” Denver said. “She was diagnosed (with Alzheimer’s) in December of 2013, I believe. It was just an awful thing to happen. I can’t imagine a more cruel and ironic thing to happen to someone as full of life as she was.”

Danita was a guidance counselor at Normal Community High School while her husband was coaching the Redbirds to a 48-54 record over nine seasons. Denver guided ISU to the Division I-AA playoffs in 2006.

“So many great memories, so many great people I got to be around both with the university and athletic department and also in the community,” Denver said. “We lived in Bloomington-Normal longer than we lived anywhere else as a family. We had some real success and we also had a little bit of trouble gaining that consistency we were striving so hard for.

“I had a hard time keeping (assistant) coaches. That’s what you get for hiring great coaches. I take great pride that I have coaches all over college football (including Virginia Tech head coach Justin Fuente) and the NFL that I gave them their first job. I don’t take credit for how good they are, but I do take credit for recognizing talent.”

Johnson had breakfast about once a week at Denny’s with former ISU Athletic Director Sheahon Zenger.

“Sheahon is just a prince of a guy. To this day, we have a great relationship,” said Johnson. “We were sitting there talking about things we needed to do to advance the program.

After three seasons as Colorado offensive line coach, Johnson returned to his alma mater and his hometown of Tulsa. He was offensive line coach and offensive coordinator during a 2011-14 stint with the Golden Hurricane working under former teammate Bill Blankenship as head coach.

“I came back really hoping that would be my last job. I was hoping 10-12 years and then try to transition over on the administrative side,” said Johnson, who was an all-conference lineman at Tulsa before being picked in the eighth round of the 1981 NFL Draft by Tampa Bay.

“The bottom line is Bill picked a fight with the president and AD he couldn’t win and got himself fired. The head coach gets fired, the staff gets let go, too.”

Just as importantly, Danita’s doctors were in Tulsa. That contributed to Denver in 2015 taking the job as head coach at Division II Missouri Southern, which is a 1-hour, 45-minute drive from Tulsa in Joplin.

As Danita’s decline continued, Taylor and Kelsey, who were roommates at the time, brought Danita to live with them for about a year in Oklahoma City.

“It was all hands on deck. We would take her to Joplin and Dad would come here. We would be together as a family as much as we could. I would go to work during the day, and Kelsey worked the night shift as a nurse,” Taylor recalled.

“My husband worked on an oil rig at the time. He was gone for a week at a time, but he helped when he was home. That year our needs were put on the backburner. The priority was keeping Mom comfortable and finding as much joy in her time as she could.”

On the football field, Denver faced a rebuilding project in a rugged conference.

“When I got there, they recruited almost exclusively out of junior college. They expressed to me they wanted to change that,” Johnson said of his third head coaching position. “I agreed we could do that, but it would be a difficult transition.

"We committed to recruiting high schools kids and redshirting them, trying to develop a self-sustaining program. We were just about to turn the corner and see some real results when I left.”

Under Johnson, the Lions were 3-36 before he resigned after the third game of the 2018 season.

“It was related to Danita’s condition. She had been in a state for some time I couldn’t leave her alone,” he said. “Having to pay people to come to our home to be with her when I was working as much as a football coach works, that got expensive. It got to the point I needed to leave to be her full-time caretaker, and that’s what I did.”

“They weren’t home so I went to the football field,” said Kelsey, a 2009 Normal West graduate. “The team was out there practicing and there Mom was cheering from the bleachers just for practice. She loved being a coach’s wife. She was his biggest cheerleader.”

Caring for Danita and sharing in the grief of her illness became a unifying factor for an already close family.

“It was a group effort,” Denver said. “I can’t say enough about my girls and what incredible young women they turned out to be. I’m very proud of them. They were so close to their mother. It was so heartbreaking to me. They were about as close to being three sisters as you could imagine.”

Similarly, the Johnson daughters could see the strain on their father.

“He loves football, but he loves his family more,” said Taylor, a 2007 Normal West graduate. “He’s a burly, tough football coach, but he’s also super emotional and not afraid to show his emotion.

"It was really hard to watch him go through that. You’ve been together over 30 years, and you’re watching your wife suffer, knowing mentally you have to move on without her.”

Danita was eventually put into a memory care facility. Once the pandemic hit, her family was unable to visit. Denver had been spending six to 10 hours a day, five days a week with the girls going on weekends.

“It got to the point where you were kind of a familiar stranger,” Denver said. “They go through stages where they are very aggressive and animated and get very difficult to handle. It was not only heartbreaking but very difficult physically to deal with.

“Taylor said when they locked us out, 'this will kill mama.' And I really believe it did. About two weeks into it, the downward spiral really started. Even in her condition, she thrived being with people. That’s just who she is.”

Danita was brought home for her final days. Denver held his wife’s hand as she died.

“The first couple months were really difficult after she passed,” said Denver, a 62-year-old who is optimistic about his own battle with cancer. “But life goes on with or without you. You’ve got to get going.”

In search of another coaching job, Denver received a call from Lindenwood head coach Jed Stugart. Thinking Johnson had retired, Stugart asked for a recommendation on an offensive line coach for the Division II school located in St. Charles, Mo.

“I said would you have any interest in me. I really just want to coach,” Denver said. “It’s a beautiful school, a beautiful campus. I like the culture of the program and the school.”

“Physically, I feel good. I’ve got energy. The players call me ‘Big Sexy,’ ” Denver said. “Everything is great except we’re not playing.”

Denver then recycled a self-deprecating line he has used at least since his ISU days: "God looks after drunks and idiots, and he's always taken a special interest in me."

Denver Johnson is neither a drunk nor an idiot.

Denver Johnson is a football coach, a father and a widower trying to move on with his life.

Video: Flick tells the story of a man and his dog ... and football

Video: Flick tells the story of a man and his dog ... and football

From left, Kelsey, Taylor, Denver and Danita Johnson pose for a family picture. 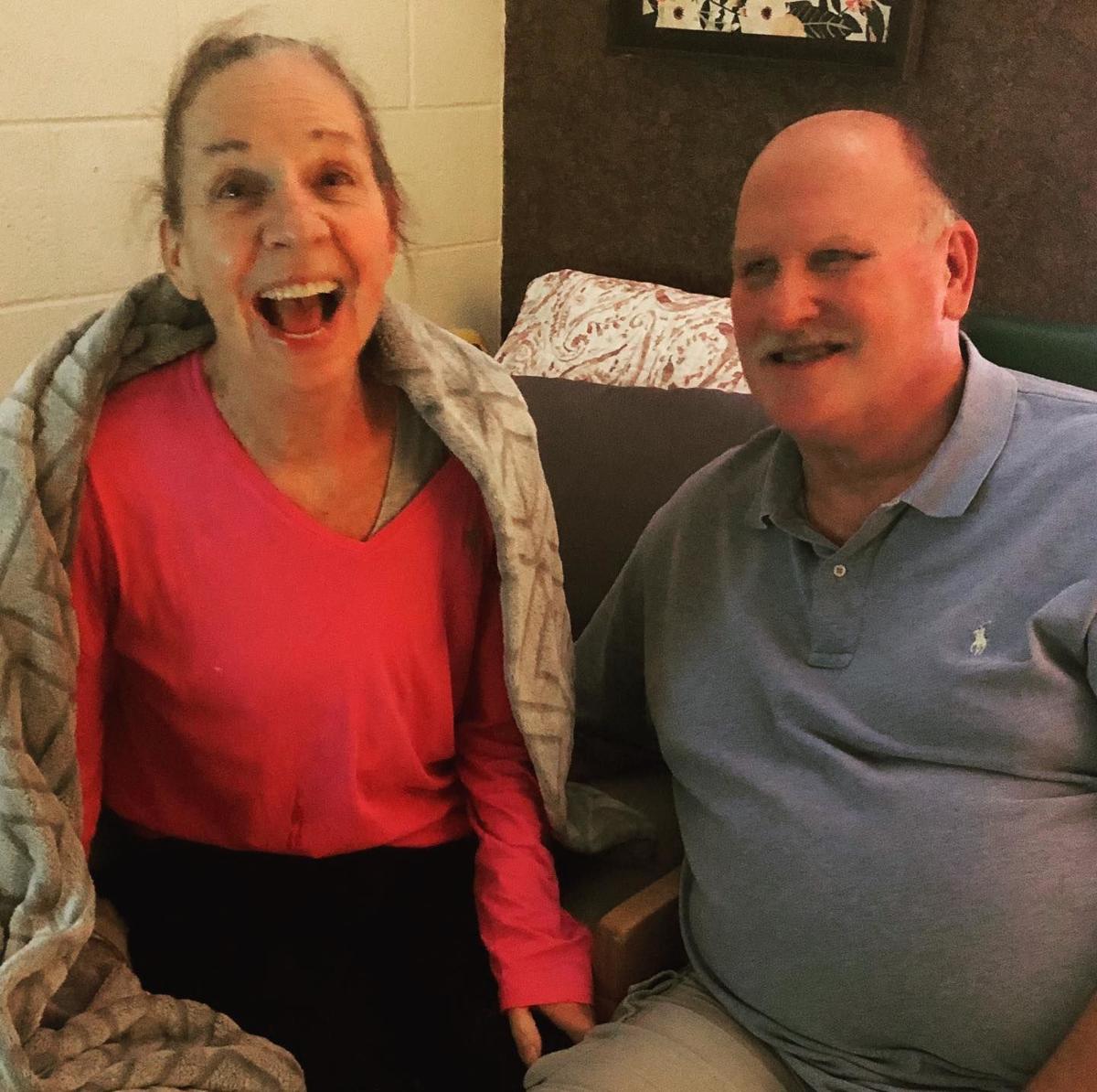 Danita and Denver Johnson were married in July of 1988 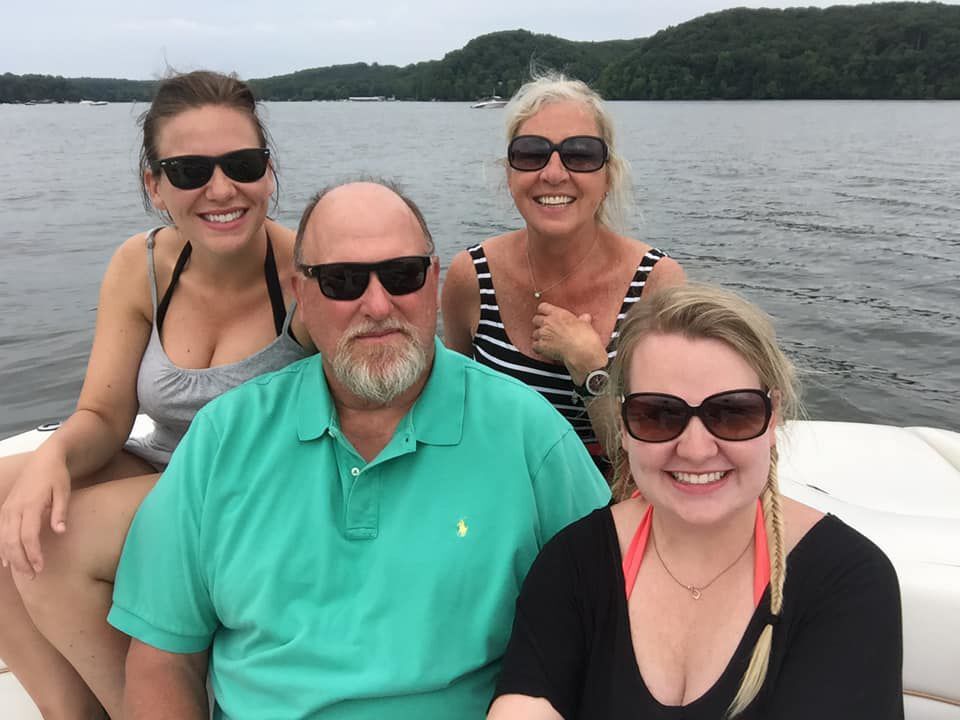 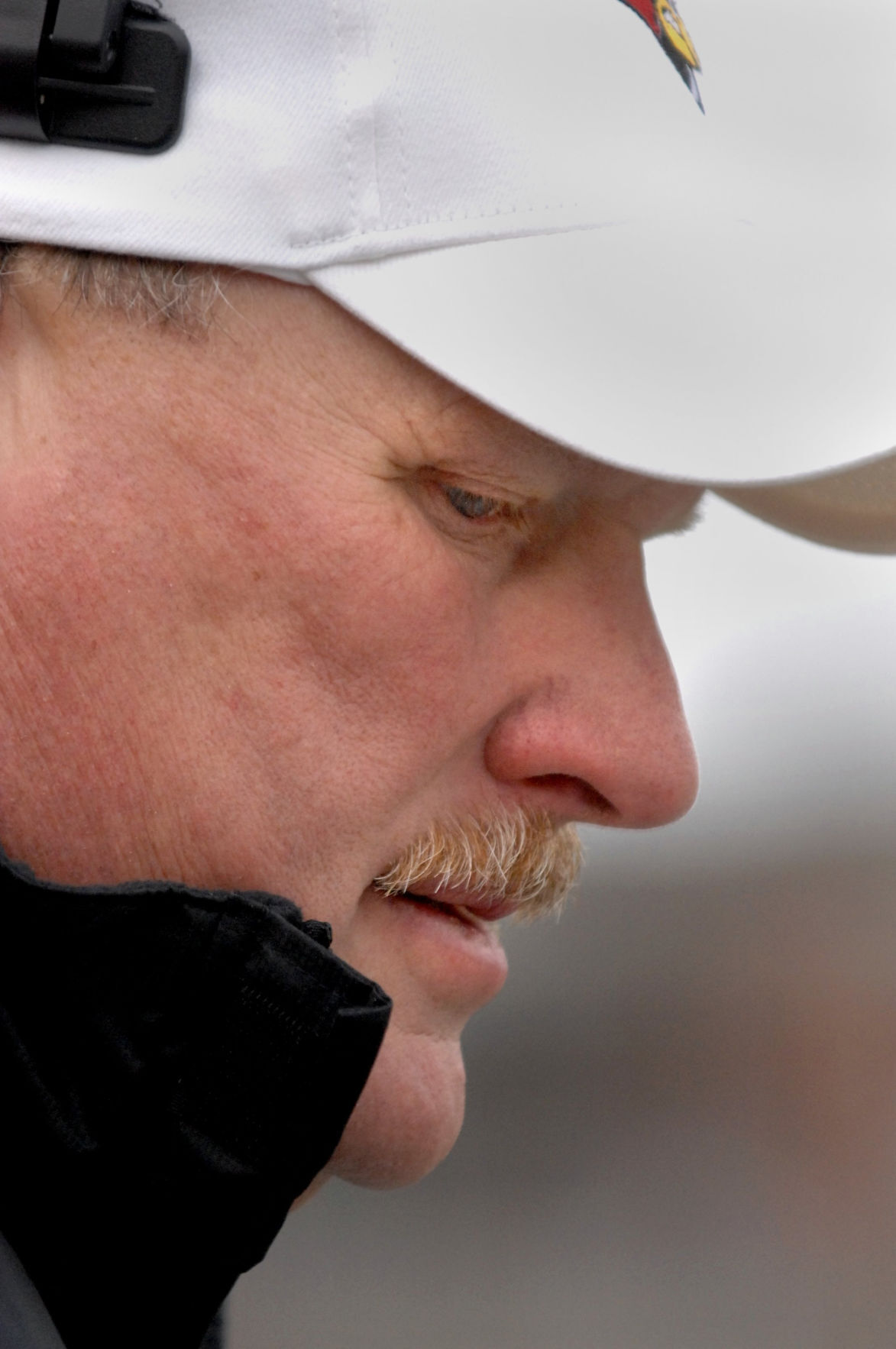 Illinois State coach Denver Johnson during their game against Southern Illinois Saturday, Nov. 22, 2008, during the second quarter at Hancock Stadium in Normal.

Illinois State's head football coach Denver Johnson walks on the field during the Red and White Scrimmage in August 2008 at Hancock Stadium in Normal.

Denver Johnson, ISU football coach, revs up the start of the 2005-2006 football season during the intrasquad contest in August 2005 at Hancock Stadium.