CHAMPAIGN — Kofi Cockburn was certain that he played his last college game.

The 7-foot center had starred at Illinois for two seasons and helped the program return to national prominence. His status as one of the best players in school history was undeniable, and for Cockburn, his next step seemed obvious: Declare for the 2021 NBA Draft and begin his professional career — or so he thought.

"It was basically an ego check," Cockburn said of the NBA Draft process. "You gotta check your ego sometimes like, 'Alright, this is maybe not the best decision for you. You can put yourself in a way better situation if you just take your time and do the slow grind.'"

Cockburn eventually withdrew from the draft, citing a few areas like passing, mid-range shooting and defense in which NBA teams would like him to improve, but then he quickly grabbed the attention of the entire college basketball world by entering the NCAA transfer portal.

So why, after considering the professional ranks and then looking at other schools like Kentucky and Florida State, did Cockburn return to the Illini for his junior season?

"This is where I'm going to cement my legacy. This is why I came," Cockburn said Wednesday at the Ubben Basketball Complex, which is the Illinois men's and women's basketball practice facility. "I'm building my legacy right now. Another year at Illinois is just gonna give me the opportunity to go above and beyond."

Cockburn, who went through the first team workout of his junior season Wednesday, has already put together an impressive resume. He was named the Big Ten Freshman of the Year in 2019-20 and was a consensus Second Team All-American last season, becoming the only center in program history to earn a consensus All-American nod.

Cockburn's dominance on both ends of the floor helped the Illini notch a single-season program record of 19 victories against Big Ten opponents in 2020-21, including their first Big Ten Tournament championship in 16 years.

And for a few weeks earlier this month, before Cockburn finally announced his return to Illinois, there were plenty of coaches hoping he'd transfer and impact their program the same way.

Cockburn said he spoke to former Illini assistant Orlando Antigua, who left Champaign after the 2021-21 season and is now on John Calipari's staff at Kentucky. Antigua recruited Cockburn to Illinois, and since the two of them remain close, Cockburn said he felt like he "owed" Antigua the chance to recruit him again.

"I was on a plane recruiting and I had a really nice bottle of wine (when Cockburn announced his return)," Underwood said. "I don't do social media. Literally, my daughter texted me and said, 'He's back.' That's the world we're in today. We get things instantaneously on social media and sometimes (coaches are) the last to know."

Underwood emphasized that he truly didn't know about Cockburn's return until the 7-footer's video announcement via Twitter and Instagram on Friday. He compared the situation to that of former consensus First-Team All-American point guard Ayo Dosunmu, who declared for the NBA Draft last year before ultimately coming back for his junior season at Illinois.

"Ayo gave me two minutes (last year before announcing his return) and called and said, 'I'm dropping something right now,' and I did back flips," Underwood said. "I was equally as excited for Kofi to return."

Underwood said Cockburn will have plenty of opportunities to display an expanded skill set this season, but he made it clear the formidable center isn't solely focused on his draft stock.

"What's important to him is legacy," Underwood said. "I think one of the things that's going to be different for all of us in basketball is having a place to call home and having a place to come back to. We know how former greats here are revered. Kofi's jersey will hang in the rafters here as an All-American. He's obviously going to be a National Player of the Year, probably front-runner to be honest, and (he) should be. And I think he truly loves Illinois."

Cockburn mentioned that nationwide name, image and likeness (NIL) legislation was a big factor in his decision to return to Champaign. However, the 7-footer is going through "a process" with the NCAA, according to Underwood, because Cockburn sold some of his game-worn memorabilia via The Players Trunk website before NIL laws took effect July 1. Neither Underwood or Cockburn seemed too worried about how he may be reprimanded.

Cockburn said he looks forward to playing with a talented group of guys, although the Illini will look much different without former starters Dosunmu, who is preparing the NBA Draft on July 29, and guard Adam Miller, who transferred to LSU this offseason.

Illinois still returns super senior guards Trent Frazier and Da'Monte Williams, who will both play a fifth season granted by the NCAA due to COVID-19, as well as sophomore guard Andre Curbelo, who was named the Big Ten Sixth Man of the Year last season. The Illini have also added 3-point specialist Alfonso Plummer and 6-10 forward Omar Payne, who transferred from Utah and Florida, respectively.

With those pieces in place, and the rest of the team, Cockburn believes the Illini are national title contenders.

Now, it's time to see just how far he can lead them, which he hopes is much further than the 2020-21 campaign. After locking up a No. 1 seed in the NCAA Tournament last year, Illinois was knocked out in the second round by Loyola-Chicago.

The Illini, featuring star junior center Kofi Cockburn, will face Cincinnati in the semifinals of the 2021 Hall of Fame Classic.

"It's time to bring a national championship back to Champaign."

Report: Kentucky out of the running for Illinois star Kofi Cockburn, who remains in transfer portal

A reunion with Orlando Antigua and Chin Coleman at Kentucky will not happen, according to The Athletic's Kyle Tucker. He reported that Cockburn's recruitment is now a two-horse race between Illinois and Florida State.

While Illinois awaits the decision of junior center Kofi Cockburn, who is in the NCAA transfer portal and will either return to the Illini or continue his college career elsewhere Friday, another player has already decided he's all in.

Illini center Kofi Cockburn, who is in the transfer portal, will make decision Friday

Cockburn withdrew from the 2021 NBA Draft on July 6 but remains in the NCAA transfer portal. The 7-foot center announced Tuesday via Twitter that he'll be choosing a college Friday at an unspecified time.

Anderson, a Chicago native, rounds out a staff overhaul for the Illini, who saw all three of their full-time assistants from last season leave for other programs this offseason.

"Kentucky? It's a serious option," Cockburn told ESPN. "(Former Illinois assistant Orlando) Anitgua is my guy. I'm going to consider them, but there (are) a lot of schools."

Jim Polzin: Why a 'matured' Bret Bielema is good news for the Big Ten 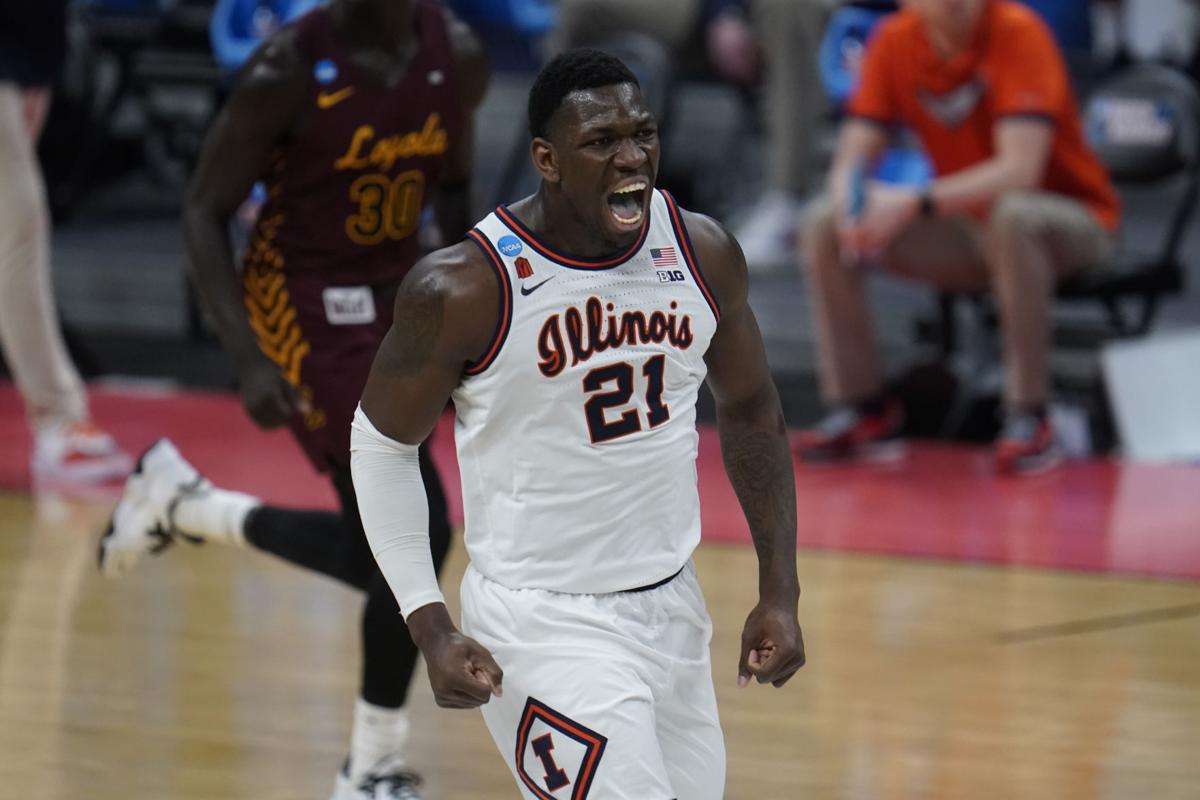 Star center Kofi Cockburn has high expectations for his junior season at Illinois. 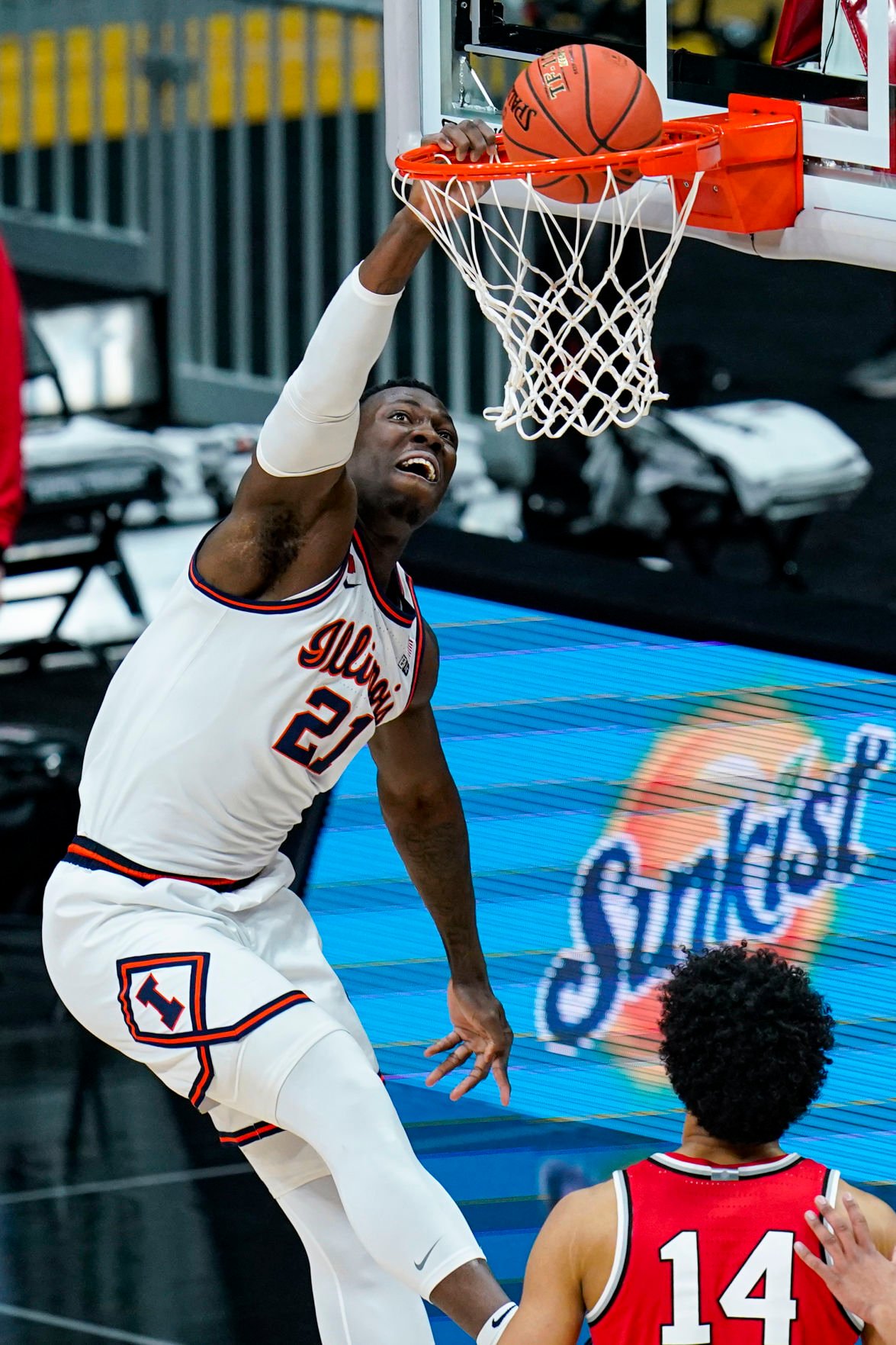 Illinois center Kofi Cockburn (21) goes up for a dunk against Ohio State in an NCAA college basketball championship game at the Big Ten Conference tournament in Indianapolis.