Dan Muller tries to retool Illinois State basketball fortunes: 'No one is more disappointed about the record we had this year than me'
4 comments
Share this
× 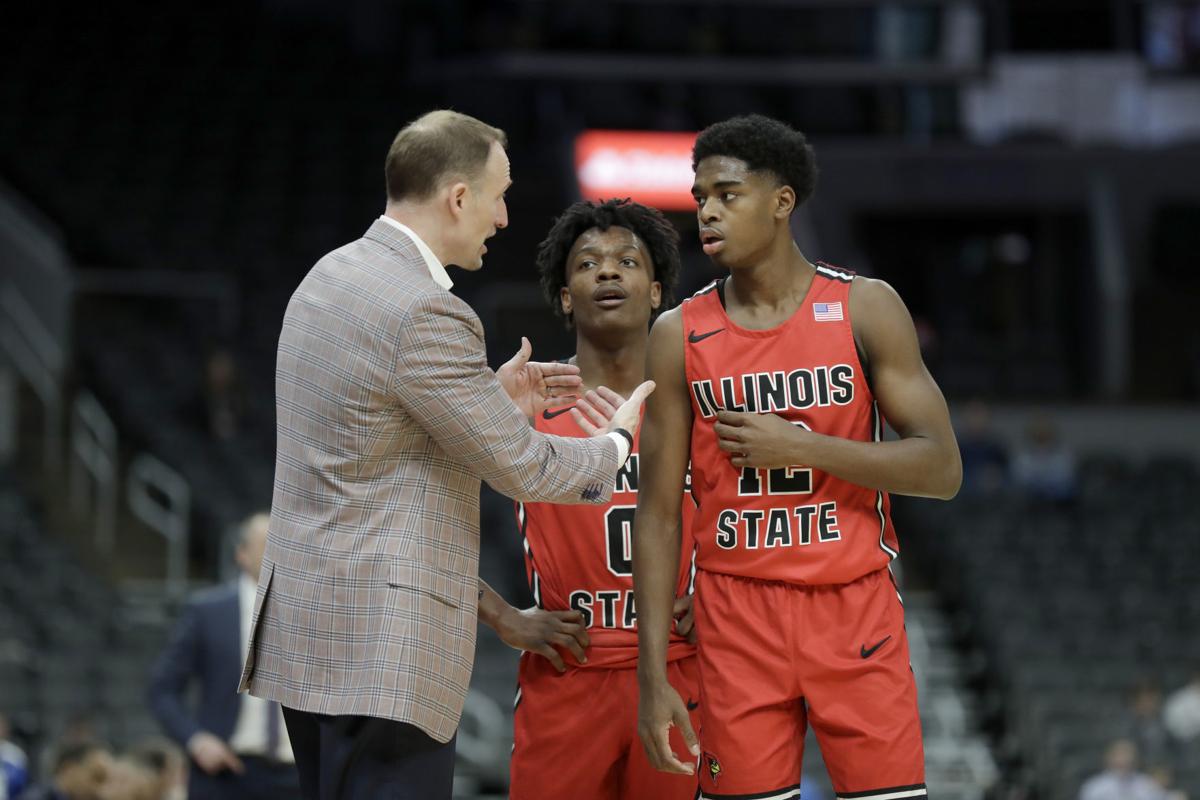 Illinois State head coach Dan Muller talks with DJ Horne (0) and Antonio Reeves (12) during the second half of the Redbirds' game against Drake in the first round of the Missouri Valley Conference Tournament on Thursday, March 5, 2020, in St. Louis. 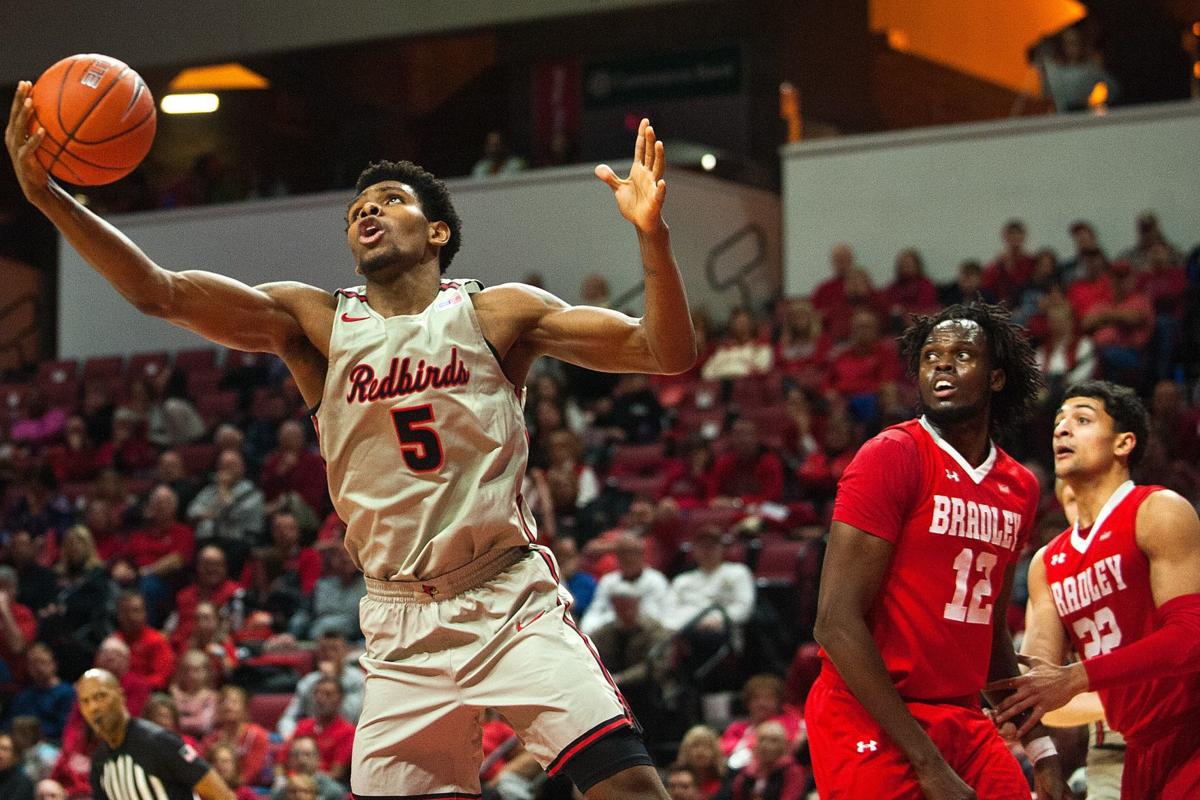 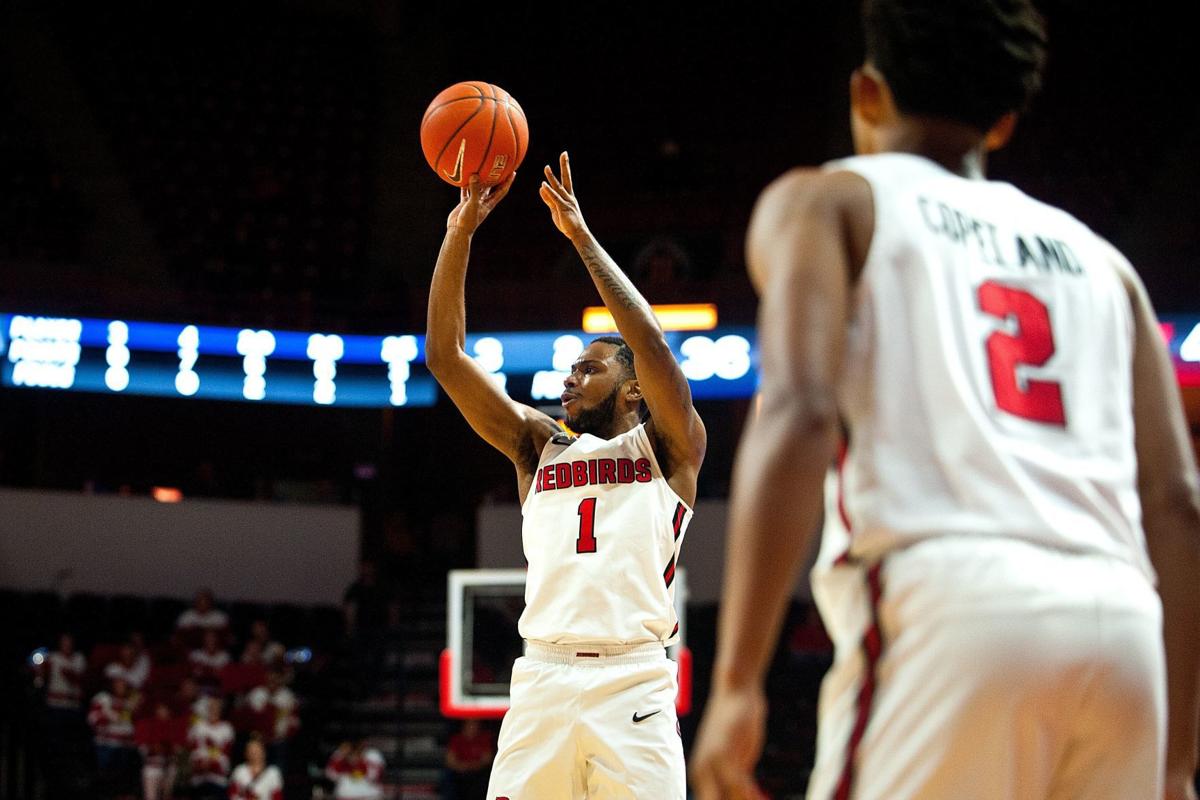 Illinois State guard Dedric Boyd attempts a 3-pointer during the Redbirds' nonconference game against Illinois-Chicago on Wednesday, Dec. 18, 2019, at Redbird Arena. ISU shot 2 of 15 from beyond the arc in the game, but beat the Flames, 67-66.

NORMAL — The world has basically turned upside down since March 5 when Illinois State's basketball team ended a 10-21 season with a 75-65 loss to Drake in a Missouri Valley Conference Tournament play-in game.

Redbird head coach Dan Muller and his staff are confined to staying at home as the NCAA mandated a dead period for in-person recruiting until at least April 15 because of the coronavirus outbreak.

Muller was supposed to meet with his team Sunday night as they returned from spring break. Workout and weight lifting schedules would have been set. Individual meetings with players would have followed this week.

None of that will be happening as schools across the country sort out the ramifications of students being off-campus for an undetermined length of time.

Yet that doesn't mean the planning for the 2020-21 season stops. Quite the contrary.

"As I evaluate the season, but more importantly where the program is at, no one is more disappointed about the record we had this year than me. That's my job," he said.

However, with junior forward Keith Fisher III and freshmen guards DJ Horne and Antonio Reeves leading the returnees along with what appears to be a promising recruiting class, Muller believes better days are ahead.

"As you evaluate, our culture is good. The guys were great off the court; they played hard; they were coachable," he said. "Then it comes down to having the depth we need, developing guys and putting them in the right position."

A year earlier, after a season that started with Missouri Valley Conference championship hopes and ended 17-16, Muller vowed to restore "the toughness and competitiveness and effort" of his program.

To a degree, that was accomplished. Ultimately, though, turnovers and lack of depth that became apparent with some key injuries sent this season into a tailspin from which ISU couldn't recover.

ISU finished 287 of 350 Division I teams in turnovers with 14.4 per game, including 12 games of 16 or more. That was often the difference in the 11 games decided by six points or less where the Redbirds went 4-7.

Redshirt sophomore forward Taylor Bruninga played in only 15 games and averaged 11 minutes because of left foot trouble that has plagued him for two seasons. Matt Chastain, a redshirt junior wing from LeRoy, missed the first two games with a broken hand and later needed arthroscopic knee surgery that shelved him for 10 games.

Dedric Boyd, a redshirt sophomore guard, was starting to regain his form late in the season before a bone bruise on his knee put him out four games.

"Going into next year I have to do a better job with the roster to have quality depth if we have injuries," said Muller, who has four years left on the seven-year contract he signed after ISU shared the MVC regular-season title in 2017.

Horne (8.7 points per game) and Reeves (7.2 ppg) played heavy minutes in their first season and more than held their own. Horne made the MVC All-Freshman Team while Reeves was on the MVC All-Bench Team.

Fisher had his struggles much of the season. But the 6-foot-8 transfer from San Jose State came on strong in the last month, averaging 13.0 points and 6.9 rebounds in the final 10 games.

"There's not all these drastic changes we need to have and not the same as last year when we had a violation of our culture, I thought," said Muller.

What Muller knows must change is taking care of the ball and defensively guarding the ball. Opponents shot 44.4% from the field and scored 70.0 points, which ranked Nos. 7 and 8 in the Valley, respectively.

"We probably had too many guys in decision-making positions this year offensively. Some of our better players were high-turnover guys," said Muller. "The main issue we had offensively was our turnovers ... you look when opponents had big runs, I would say 80 percent of the time it was because of mass turnovers by our team.

"We have to evaluate offensively what we're doing. We'll have a lot new guys next year. The personnel and skill sets will be different."

Muller blames himself defensively for trying to do too many things early, such as full-court pressure. The Redbirds didn't mix up defenses much between man and zone like they've done in recent seasons until the last month.

The Redbirds also got a commitment last week from Alex Kotov, a 6-10 forward from Moscow, Russia, who is at Daytona State College (Fla.) and will have three years of eligibility after suffering a broken pinkie finger in the second game this season.

"I couldn't be more excited about who we have coming in next year," said Muller. "There will be some new faces, certainly, and some really talented guys will be on the team next year with great depth."

Kotov's commitment puts the Redbirds one over the NCAA scholarship limit of 13.

Muller didn't want to discuss what possible returnees might not be on the roster next season until he has a chance to have meetings with the players, either in person or through an online video chat.

Having the same assistants in place next season would be the first in Muller's nine years as his alma mater's head coach. Many past Muller assistants have moved on as high-major assistants or head coaches (Dana Ford and Brian "Penny" Collins at Tennessee State).

Brian Reese is finishing his fourth year as an ISU assistant. Brian Jones was in his first year as the Redbird associate head coach, while Marcus Belcher also was a first-year assistant.

"I love having staff continuity, but I've said many times if one of these guys has a chance to get a job that will advance their careers I will help them," said Muller. "I think that's part of my job is to help advance the careers of my assistants and also help our players grow.

"But it will be really nice to have the same staff. Training, planning, what game day looks like, what kind of players we're recruiting that fit me, the most important thing you can have in any program is your staff."

Kindred: Illinois State's basketball program '7-under' for the past three years. That's not nearly good enough

Playing at 7-under? Sounds good if you're on the golf course. For Illinois State's basketball program, seven games under .500 for the past three seasons is a long way from "good."

NORMAL — It has been less than a week since Illinois State's basketball season came to a crashing end. The pain of a 17-16 season is still evi…

Chastain, Bruninga will not return to Illinois State basketball team

Matt Chastain and Taylor Bruninga will not return to the Illinois State basketball team because of chronic injuries.

Even though they're stuck at home like much of the country, Illinois State's basketball coaches aren't laying on their couches relaxing and binge watching old games.

Kindred: No regrets for former LeRoy all-stater Matt Chastain now that his basketball career at Illinois State is done

Matt Chastain's basketball journey ended one year from the finish line largely because of five knee surgeries: two at LeRoy, one as a freshman at Loyola University, two since transferring to ISU.

Summer basketball workouts for Illinois State, other Division I schools could be in jeopardy

Summer basketball workouts have been held for Division I teams since 2012. That might be another casualty of the COVID-19 pandemic, leaving Illinois State and others to adjust.

Of all the gymnasiums in the Pantagraph area, here are one observer's favorites

Gymnasiums are about much more than bleachers and scoreboards. The fans, the players and the coaches are what makes them special. Take a look at Randy Reinhardt's top 10.

5Q is a local feature published on Sunday.

Illinois State head coach Dan Muller talks with DJ Horne (0) and Antonio Reeves (12) during the second half of the Redbirds' game against Drake in the first round of the Missouri Valley Conference Tournament on Thursday, March 5, 2020, in St. Louis.

Illinois State guard Dedric Boyd attempts a 3-pointer during the Redbirds' nonconference game against Illinois-Chicago on Wednesday, Dec. 18, 2019, at Redbird Arena. ISU shot 2 of 15 from beyond the arc in the game, but beat the Flames, 67-66.