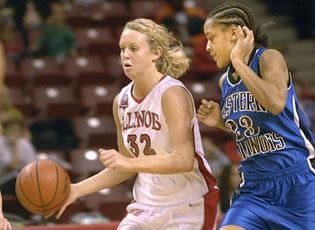 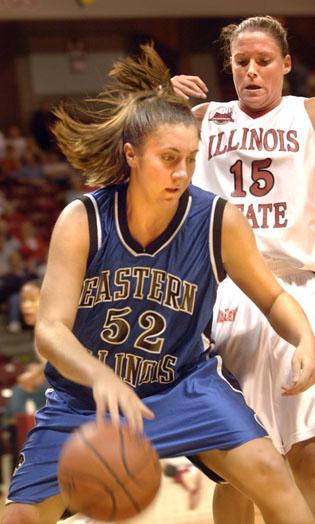 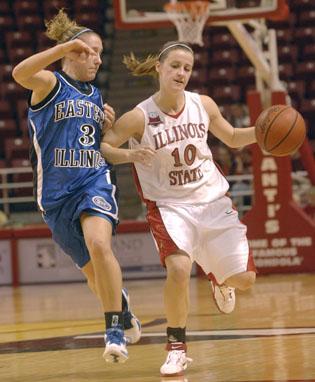 NORMAL — Struggling Illinois State senior guard Megan McCracken got an open look behind the 3-point arc and fired away. She found nothing but net for a change.

“It felt good,” McCracken said. “It’s nice to hit that first one. When you miss the first one, it’s like, ‘Here we go again.’ ”

McCracken broke out of a season-long shooting slump by pouring in a career-high 27 points and matching her single-game school record of seven 3-pointers Tuesday night.

Three other Redbirds scored in double figures as ISU rolled to a resounding 101-72 win over in-state rival Eastern Illinois before a Redbird Arena crowd of 1,066.

ISU, improving to 4-2 with its second straight blowout win, reached the century mark for the first time since March 2, 1990. Eastern also was that victim in a 107-68 ISU win at Redbird Arena.

McCracken, who entered the game shooting 29 percent from the field, sank her first five shots, including four from 3-point range. McCracken’s fifth 3-pointer of the half capped a 20-2 burst that gave ISU a 52-29 lead with 2:22 left before intermission.

“I was in the zone,” said McCracken, who finished 10 of 15 from the field and 7 of 10 from behind the arc. “The basket literally looked like it was 20 feet wide. My teammates did a great job of getting me open. It was just a great team effort.”

“Megan had the kind of game that we have all been waiting on her to come out and have,” ISU coach Robin Pingeton said. “She continues to get in the gym and work on that shot. She is able to have that type of game each time she steps on the floor.”

Eastern, which dropped to 2-3 despite a 22-point performance from Central Catholic High School graduate Rachel Galligan, never got closer than 15 in the second half. The Panthers entered the game averaging 94.0 points.

“Illinois State played their tails off and kicked ours,” Eastern coach Brady Sallee said. “They beat us in every facet of the game. So we go back to the drawing board.”

Nicolle Lewis added 12 points and eight rebounds off the bench for ISU, and Kristi Cirone contributed 10 points and a career-high 12 assists. The Redbirds shot 49 percent overall (38 of 77) and 47 percent from 3-point range (15 of 32).

“I felt like it was a great team effort,” ISU coach Robin Pingeton said. “I think things are starting to click for us. It was great to see some of our players that have been struggling a little bit offensively come up with some nice games.

“We did another great job on the boards tonight, which was exciting to see. I think we’re getting better defensively. Our goal tonight was to hold them to 65 points. We just missed that mark, but that was a pretty tall task considering that’s a very high-powered offense Eastern runs.”

Galligan, a 6-foot-2 sophomore forward who picked Eastern over ISU, also grabbed a team-high eight rebounds. Galligan was 6 of 18 from the field and 10 of 13 from the free throw line.

“This is a game I’ve really looked forward to for a long time,” Galligan said. “The opportunity to do it is one I’ll never forget. I have so much respect for this coaching staff and these girls from playing with them in the summer and working camps with them.

“It’s unfortunate things panned out the way they did. I knew it was going to be a really tough game and we were really going to have to be on and play our best basketball if we were going to win this game.”

ISU will play at Wisconsin-Green Bay Saturday at 3 p.m.

The Illinois State football team has added a wide receiver who originally signed with the Naval Academy.

The Missouri Valley has five teams in the 16-team FCS playoff bracket.

Illinois State tried to rally after losing the first two sets before falling to UNLV in an NCAA Volleyball Tournament first-round match.

Illinois State's most experienced defensive back has entered the transfer portal.

Watch now: Illinois State coach Dan Muller, like many others, scouring the transfer portal for players

Illinois State basketball coach Dan Muller and his staff are continuously looking and studying the transfer portal to replenish the roster for next season.

Morgan Day dominated in the circle for Illinois State.

NORMAL — One senior is coming back for another season with the Illinois State women’s basketball team and another is not.

Lindsey Hardiman's goal in the second overtime lifted No. 1-seed Loyola to a 2-1 victory over fourth-seeded Illinois State in a Missouri Valle…

Eastern Illinois Jessica Huffman, left, follows alongside Illinois State's Kristi Cirone, right, while she tries to keep the ball out of her reach Tuesday (Nov. 28, 2006) at Redbird Arena in Normal. (Pantagraph/B Mosher)
© Copyright 2021 The Pantagraph, 205 N. Main St. Bloomington, IL | Terms of Use | Privacy Policy
Powered by BLOX Content Management System from TownNews.com.
You don't have any notifications.