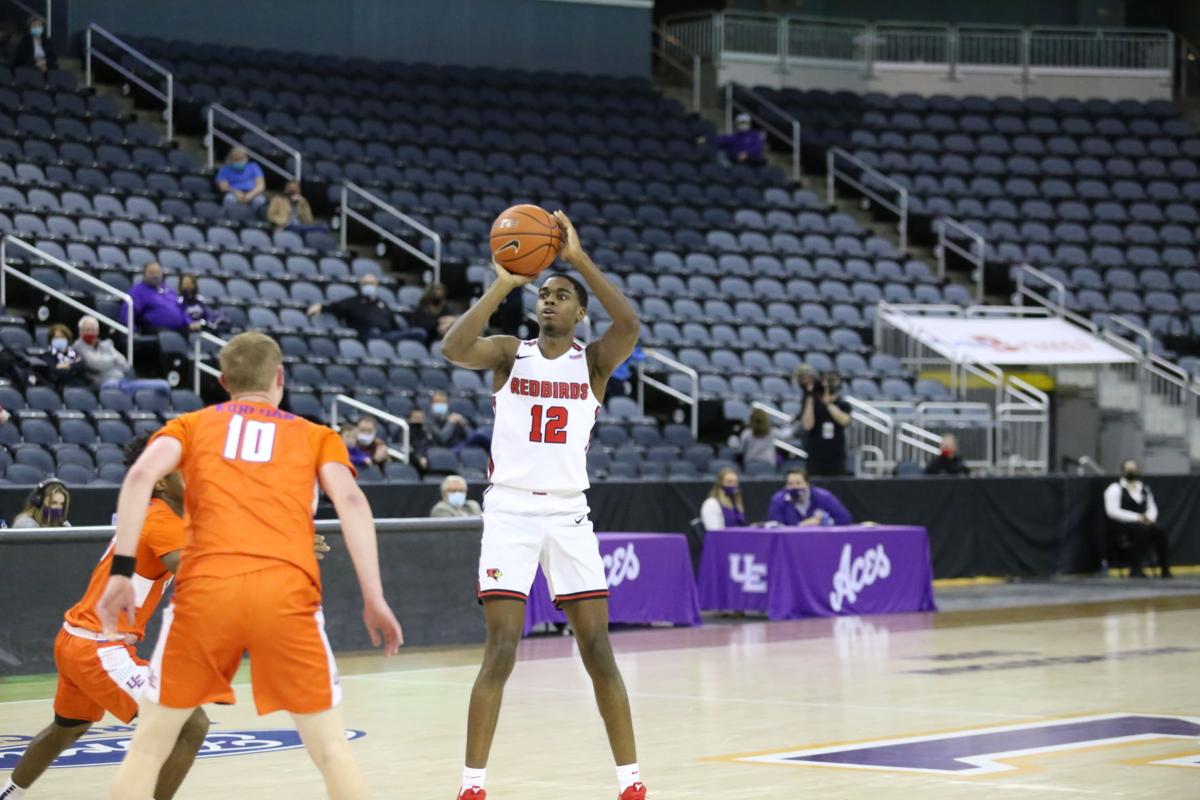 Illinois State's Antonio Reeves puts up a jumper against Evansville during Sunday's game at the Ford Center in Evansville. Reeves scored a career-high 21 points to lead ISU to a 73-68 victory over the Purple Aces. 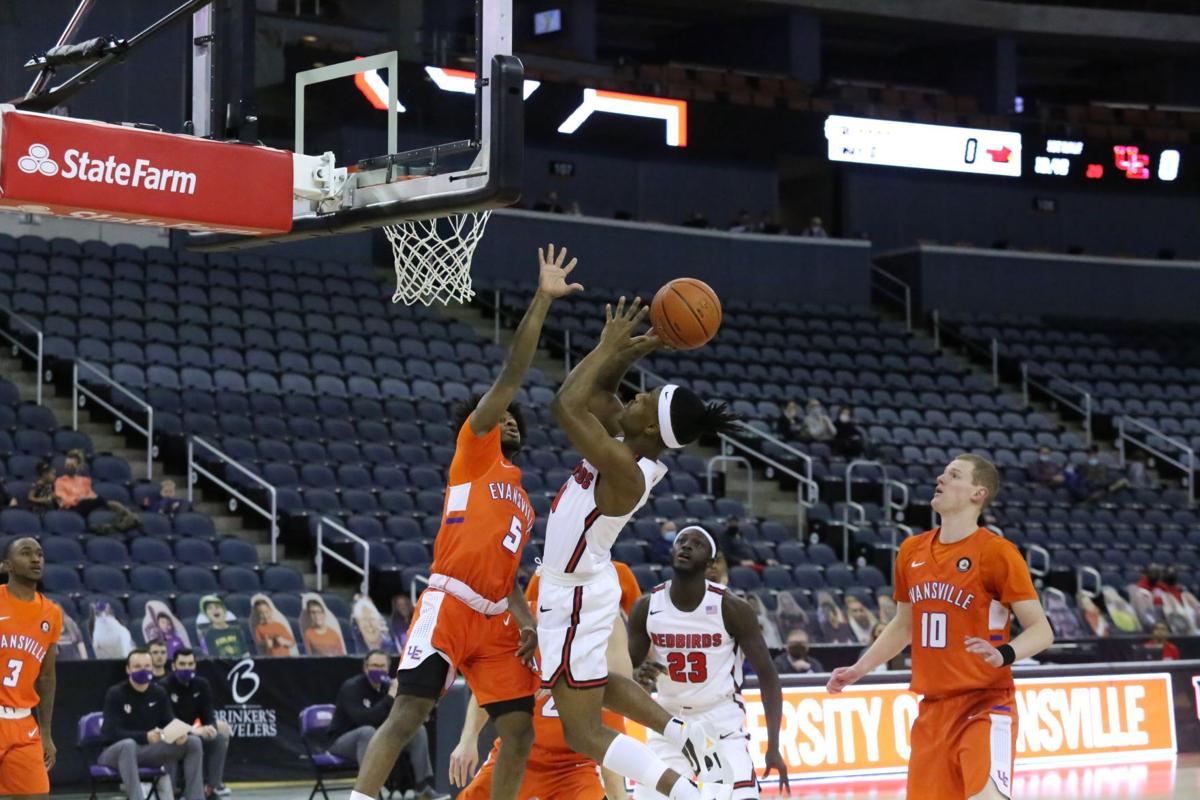 Illinois State's DJ Horne goes inside to put up a shot over Evansville's Shamar Givance in the first half of Sunday's game at Ford Center in Evansville. 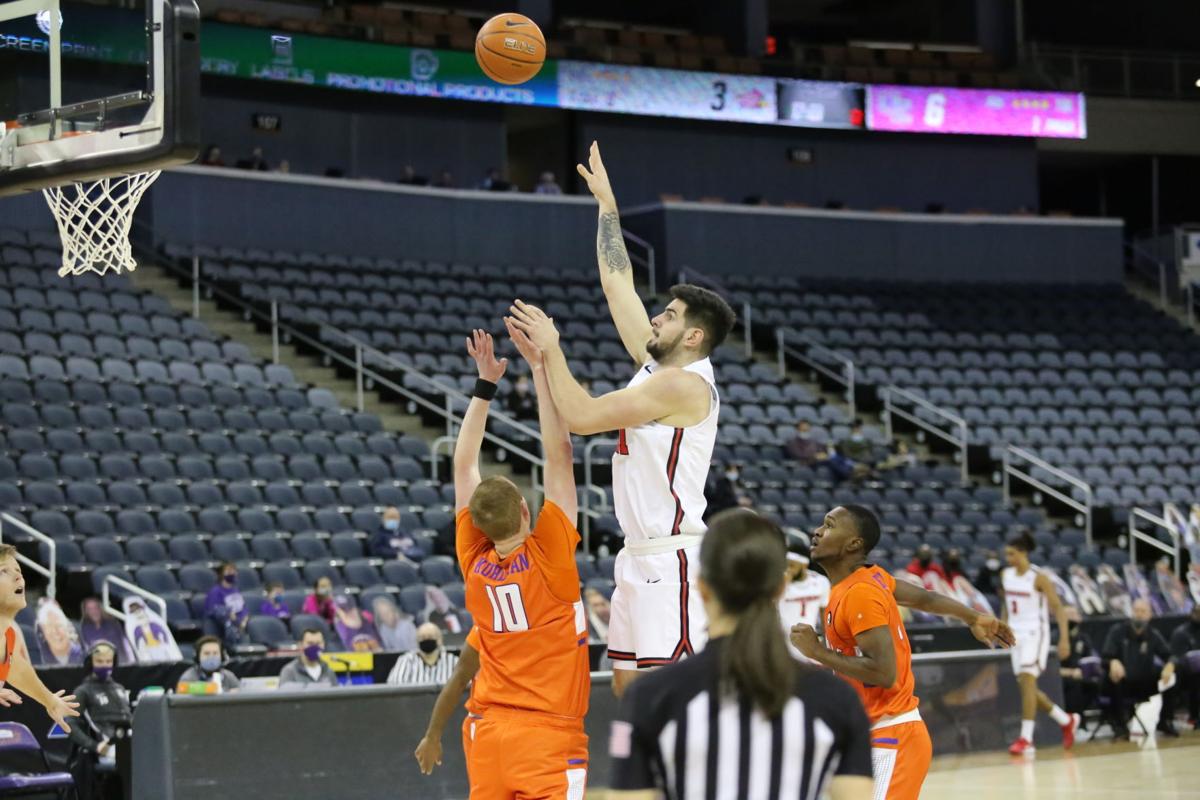 Illinois State's Dusan Mahorcic attempts a jump hook as Evansville's Evan Kuhlman defends in the first half of Sunday's game at Ford Center in Evansville.

EVANSVILLE, Ind. — With each jumper Antonio Reeves swished in the last five minutes Sunday, the cheers of his teammates on Illinois State's nearby bench grew louder.

When Reeves nailed his fifth straight shot, the Redbirds were practically dancing on the sidelines. Actually, some of them were. Make no mistake, Reeves was lifting a huge burden off his entire team's shoulders.

Reeves scored a career-high 21 points as ISU won its first Missouri Valley Conference game with a 73-68 victory over Evansville at the Ford Center.

"I was just in the flow of the game," said Reeves, who hit 9 of 11 field attempts. "I made sure my teammates got the ball first before I got shots. My teammates started looking for me and my shots started to come. Confidence started going up, and I just stayed aggressive on the offensive end."

ISU, which got beat by a combined 61 points in the first MVC weekend series against Loyola and then lost a second-half lead here Saturday, improved to 4-6 overall and 1-3 in the league.

"Probably the thing I'm most proud of is we were down seven in the second half," said ISU head coach Dan Muller. "We come back and stayed confident for a team that has lost some confidence over the course of this year.

"We've talked a lot about finishing yesterday after the game, last night and this morning. We've been bad down the stretch. I think that helped, and it comes down to players making plays and obviously Antonio Reeves did. It was a fun day and important win for us."

Illinois State warming up for 1 pm game on ESPN3. No Sy Chatman around. I will ask HC Dan Muller after game. pic.twitter.com/qbMv0Si6Ek

Junior center Dusan Mahorcic broke out of an offensive slump to add 13 points for the Redbirds, while DJ Horne and Josiah Strong had 10 each. ISU shot 62.5% from the field, hitting 7 of 11 outside the arc.

While the Redbirds continued to struggle at the free throw line (6 of 15), they committed only seven turnovers after having 15 in Saturday's 57-48 loss to Evansville.

"We just keep losing games and no one wants to lose," said Reeves, who also grabbed six boards. "Coach made sure we gained our confidence back at the hotel and just telling us what we need to do and what we need to focus on. No one was lacking confidence, I believe. We just stayed in the flow of the game."

When Reeves nailed an 18-footer with five minutes left, he put ISU ahead to stay. He kept right on firing, making four more to expand the advantage to 70-60. The Redbirds gave the Aces some life by missing four of six free throws while Jax Levitch made two 3-pointers to cut the lead to 72-68.

But Reeves sank a free throw and after a defensive stop, the Redbirds' first true road win of the season was secured.

"I thought this was the most together we've been on both ends of the court," said Muller. "And we're going to play better offensively when we try to make plays for each other and not care who gets the shots. We're learning and hopefully are understanding more after today."

Noah Frederking led the Purple Aces (6-6, 4-2) by making five 3-pointers for 15 points, while Evan Kuhlman and Shamar Givance added 13 and 12 points, respectively. Evansville shot 45% from the field, going 13 of 31 from 3-point range, and made the only free throw they attempted.

“Over the last four games, we have been able to make enough plays and I have been pleased with what we have done,” said Aces head coach Todd Lickliter. “Today, you have to give Illinois State credit. We had some defensive breakdowns and when we did, they took advantage of it. That is the way it works. It is a lesson in the process. We will evaluate our performance and learn from it.”

Evansville working on its offensive execution and not just loosening up for Illinois State. Some coaching going on less than 40 minutes before tip. This usually stuff done in walk through. Adapting bc of back to backs. pic.twitter.com/AoofsYNLux

ISU came out fast for the second straight game.

Harouna Sissoko, who missed the second half Saturday with a strained Achilles but bounced back to play 33 minutes and contribute five points and a team-high nine rebounds, bulled inside to score and give the Redbirds a 19-8 lead with 11:20 left in the first half.

Horne picked up two quick fouls to give him three with 8:39 left, and the Redbirds stalled without him. ISU went more than five minutes without a basket, and Evansville found its 3-point touch after a cold start.

"Hopefully it's a new start," said Reeves. "Hopefully we can gain from this W."

ISU returns to Redbird Arena for the first time since Dec. 15 when it entertains Indiana State at 3 p.m. Saturday and next Sunday.

Chatman opts out: Muller said junior forward Sy Chatman, a transfer from UMass, has decided to opt out of this season for personal reasons, although he is still enrolled in school. The 6-foot-8 Chatman played in five games, averaging 4.8 points and 1.0 rebounds.

Illinois State's basketball team is finding out how big of a loss not having Keith Fisher III is with every passing game.

Watch now: Loyola has its way with Illinois State for second straight day

Illinois State had a couple more bright spots than the day before, but Loyola routs Redbirds for the second straight day to open MVC action.

Watch now: MVC notebook: Bouncing back the next day after losing all about 'competitive mentality'

Dropping the first game of back-to-back MVC games doesn't guarantee a lost weekend. Valley teams who have lost the first game are 5-6 the next day in this new scheduling format.

Illinois State looked sleepy at the start of the game and beginning of second half. It cost the Redbirds dearly as Indiana State completed a weekend Missouri Valley Conference sweep.

The confetti won't be flying at Redbird Arena. Will the intensity of the Bradley-Illinois State rivalry be the same without fans in the stands?

Illinois State's Antonio Reeves puts up a jumper against Evansville during Sunday's game at the Ford Center in Evansville. Reeves scored a career-high 21 points to lead ISU to a 73-68 victory over the Purple Aces.

Illinois State's DJ Horne goes inside to put up a shot over Evansville's Shamar Givance in the first half of Sunday's game at Ford Center in Evansville.

Illinois State's Dusan Mahorcic attempts a jump hook as Evansville's Evan Kuhlman defends in the first half of Sunday's game at Ford Center in Evansville.