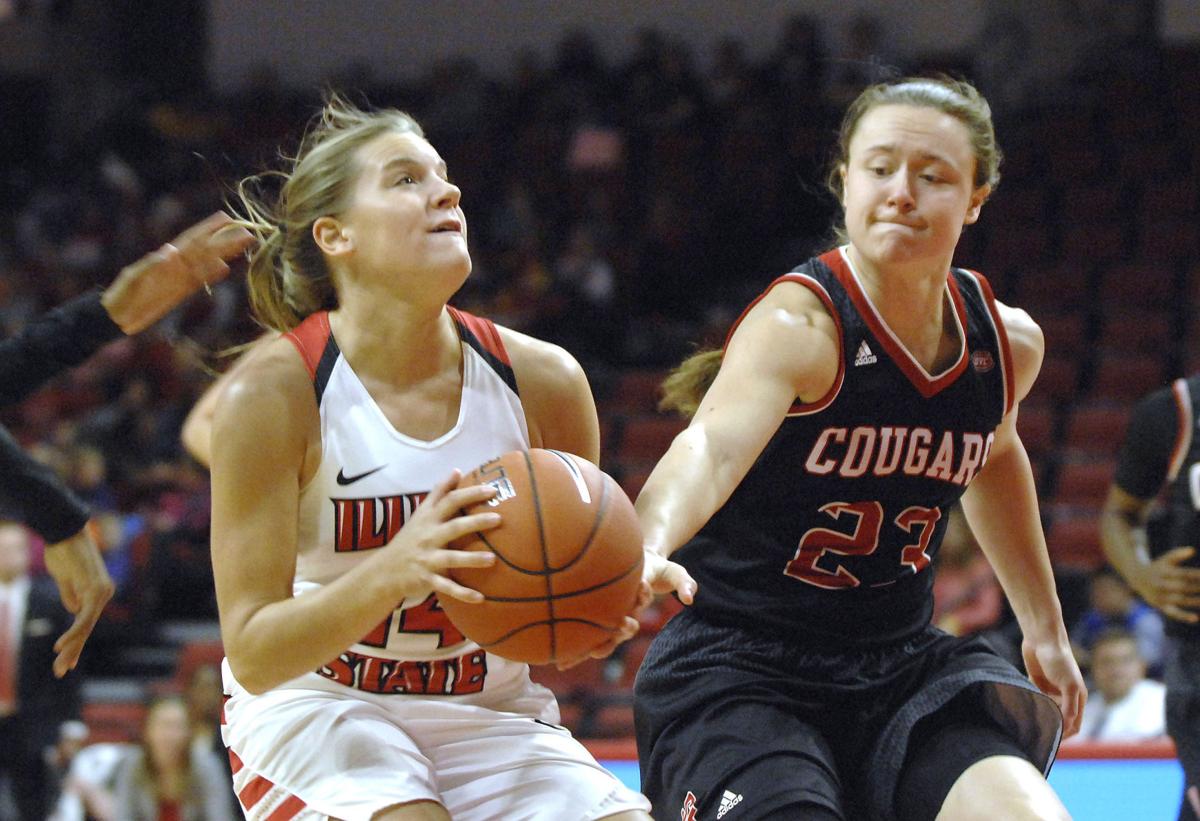 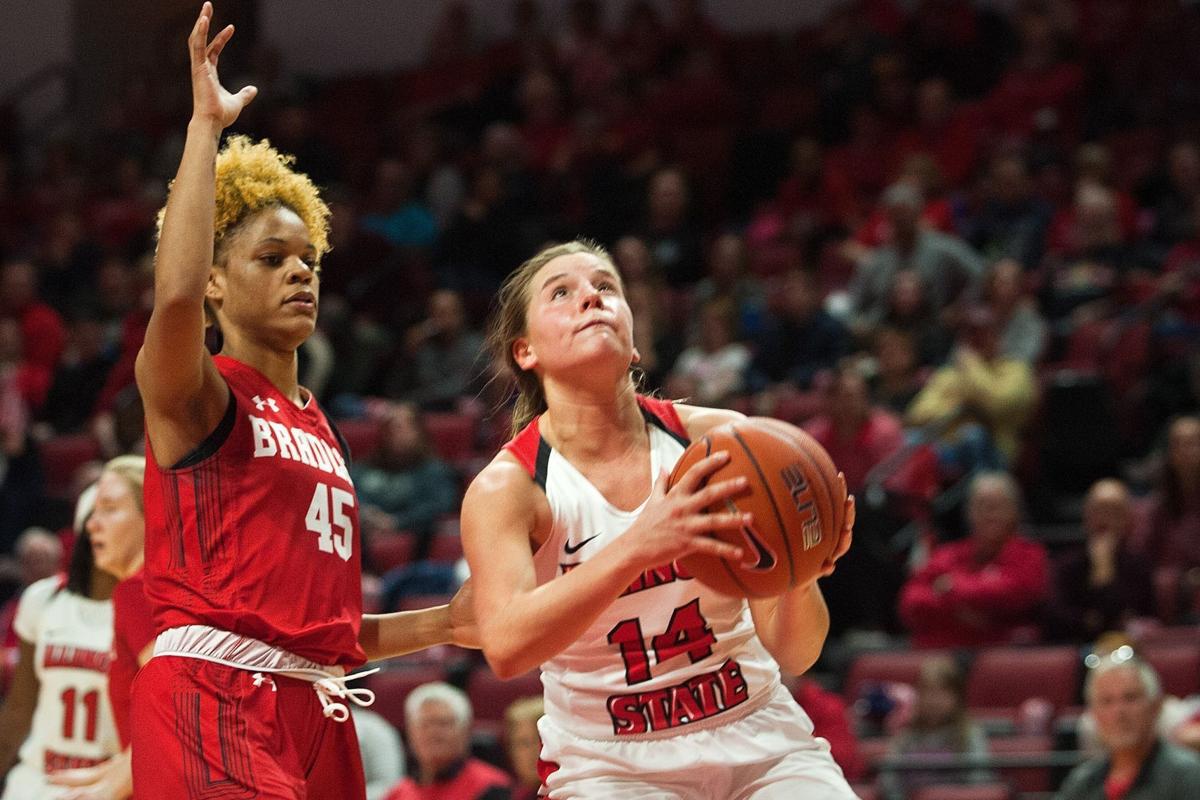 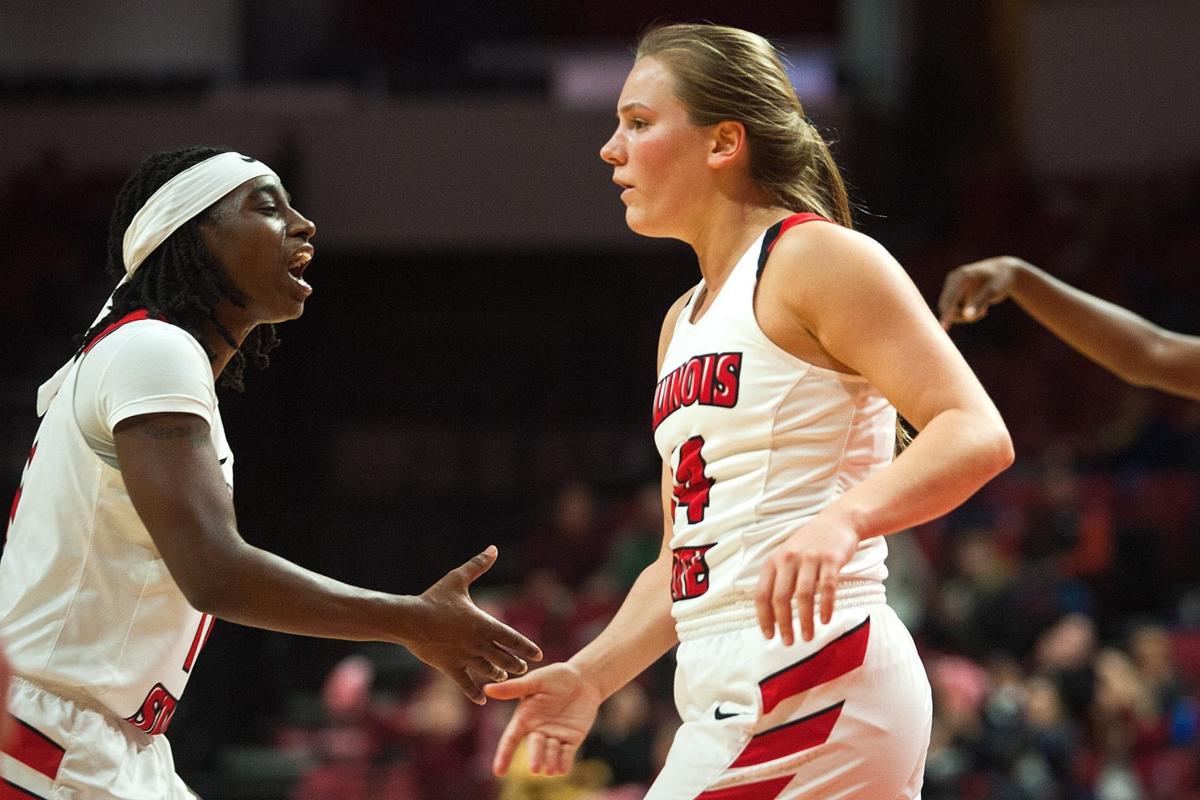 Illinois State guard Paige Saylor receives a hand from teammate TeTe Maggett after a basket plus the foul, during the Redbirds' 66-62 Missouri Valley Conference loss to Bradley on Friday, Feb. 7, 2020, at Redbird Arena. 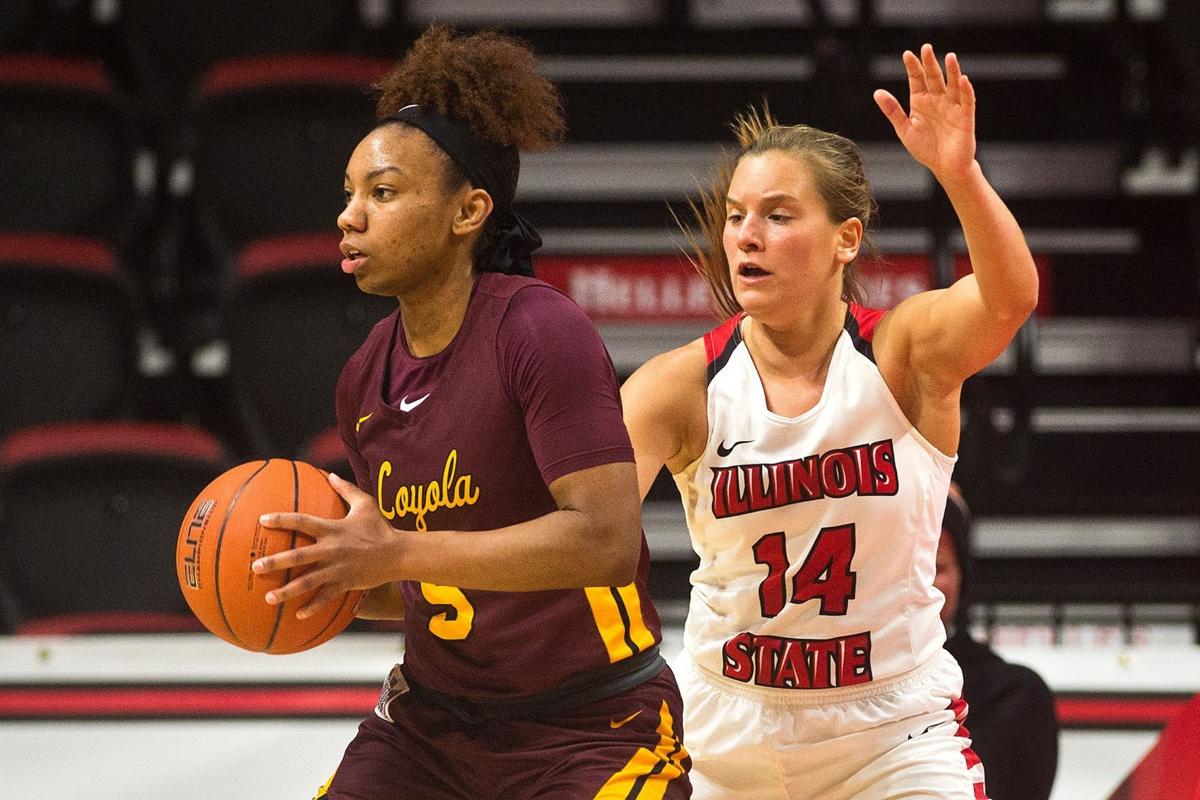 NORMAL — Every once in a while, Illinois State women’s basketball coach Kristen Gillespie has to have “that talk” with senior guard Paige Saylor.

This is not, mind you, a come-into-my-office-and-sit-down talk. This is a gentle prodding, a “little nudge” as Gillespie calls it.

“We’re harder to guard when she scores,” said Gillespie whose team returns to Redbird Arena to face Valparaiso at 4 p.m. Thursday. “Paige is just so unselfish. Scoring is the last thing she thinks about. When she is a threat, it opens up a whole other area of our offense.”

.@paiigesaylor with the layup to put the 'Birds up three! She's 3-for-3 on the day with six points!

Saylor is among the Missouri Valley Conference’s top point guards and a two-time member of the league’s All-Defensive team. So scoring isn’t foremost in her thoughts.

“It’s been a constant for my four years here. If I do pass up a shot, she (Gillespie) will say something,” said Saylor. “It’s subtle, nothing too crazy. A ‘knock that down’ or ‘it’s all you.’ Just little things like that.”

The past four games have been a vivid illustration of Saylor’s impact. The Martinsville, Ind., native scored five points over 60 minutes in two Redbird losses at Northern Iowa. Against Indiana State last week, Saylor played 49 minutes in two wins and totaled 22 points while connecting on 9 of 9 shots from the field.

“The UNI weekend, she doesn’t like to lose. She wanted to do everything she could do to help us win,” Gillespie said. “She has the tools. She’s so quick off the bounce, and she’s a really good shooter. Sometimes she passes up shots because she’s looking to penetrate to get other people shots.”

The Redbirds (5-2, 2-2 in the Valley) will be shooting for a better start when they face Valpo. ISU has outscored its opponents in every quarter, but the margin is smallest (101-95) in the first period. And, the initial quarter has produced less points than each of the following three.

𝙍𝙚𝙙𝙗𝙞𝙧𝙙 𝙍𝙚𝙘𝙖𝙥: Check out highlights from Thursday's 69-38 win over Omaha! 🏀

“We talk about the first possession is just as important as the last possession,” said Saylor. “Being more focused and cognizant of that can help.”

“They are very different that anything we’ll see this year,” Gillespie said. “From an offensive standpoint, they spread you out. They play five guards and either shoot the three or try to break you down off the bounce.”

Valpo boasts three of the Valley’s top 10 scorers in Carie Weinman (14.6 per game), Grace White (14.3) and Shay Frederick (14.0). Frederick paces the conference at 5.1 assists per outing, while White is her team’s leading rebounder at 6.5.

“It’s just winning our matchup,” Saylor said of defending the Crusaders. “They do play so differently it does cause some confusion with communication. We have to be really locked in and communicating well.”

ISU will try to exploit Valparaiso being the Valley’s worst rebounding team at a minus 9.8 margin. The Redbirds are plus 5.1.

Thursday’s game is ISU’s first home contest since Dec. 17. After playing their first four conference games on the road, the Redbirds have the next five and nine of the next 11 at home.

“It’s just being in a rhythm for our players not having to travel, especially with school starting back up this week,” said Gillespie. “Traveling is so different this year with COVID. We’re really looking forward to being home the next couple weeks.”

Senior JuJu Redmond has scored 63 points over the past four games and paces ISU at 13.4 per game.

Roanoke-Benson guard Jack Weber (25) is mobbed by teammates after the Rockets defeated Chicago Fenger, 45-43, during their Class 1A super-sect…

Roanoke-Benson claimed the Class 1A super-sectional championship at Redbird Arena in dramatic fashion.

The pain of Alzheimer's

Former Illinois State football coach Denver Johnson and his daughters endured a lengthy ordeal leading to the death of their wife and mother Danita.

Reflections on a milestone in a pandemic

Illinois State picked up its first Missouri Valley Conference victory of the season.

The Illinois State women's basketball tries to rebound from an 0-2 conference start with games at Indiana State on Thursday and Friday.

The Illinois State women's basketball team looks to boost its post production for games Thursday and Friday against Evansville at Redbird Arena.

Illinois State guard Paige Saylor receives a hand from teammate TeTe Maggett after a basket plus the foul, during the Redbirds' 66-62 Missouri Valley Conference loss to Bradley on Friday, Feb. 7, 2020, at Redbird Arena. 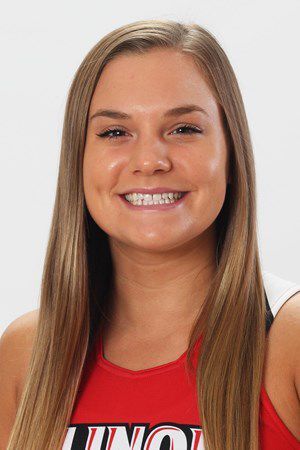