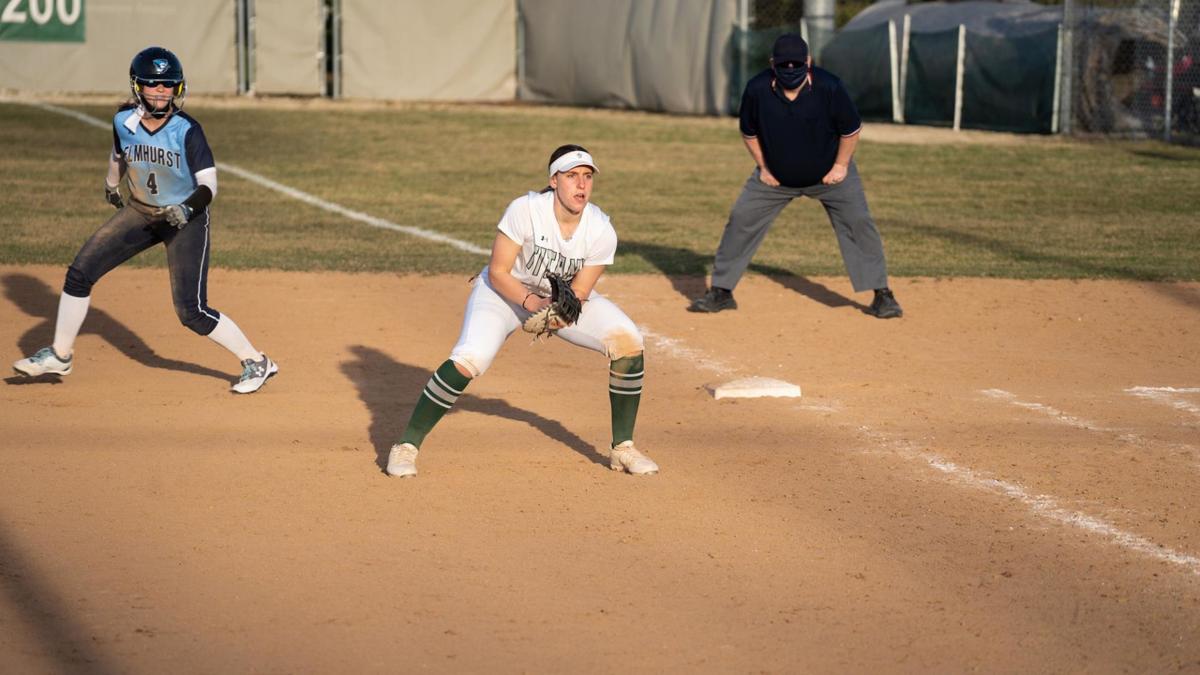 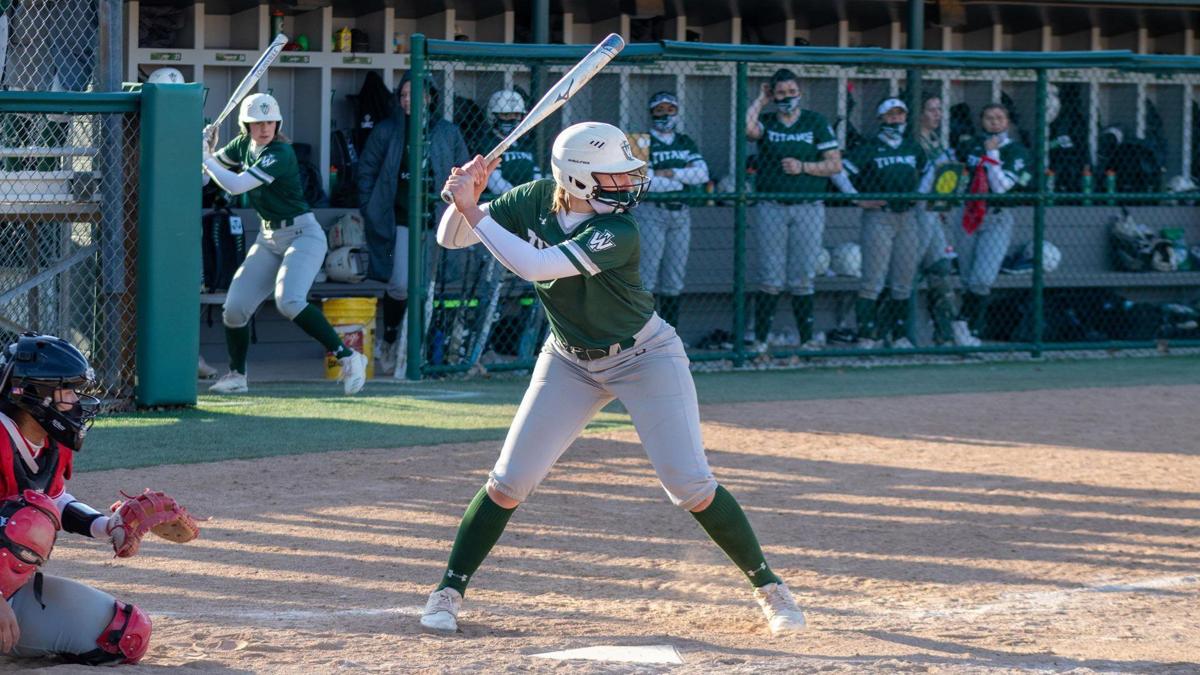 Illinois Wesleyan junior Colleen Palczynski readies for a pitch in the batter's box. 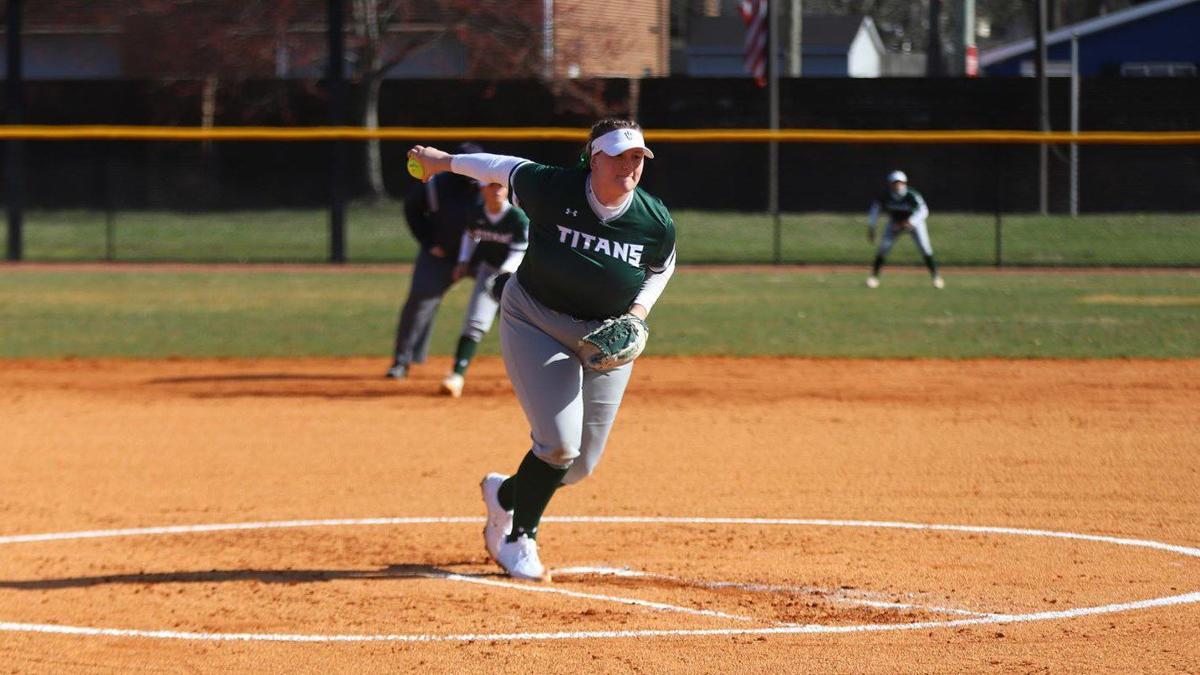 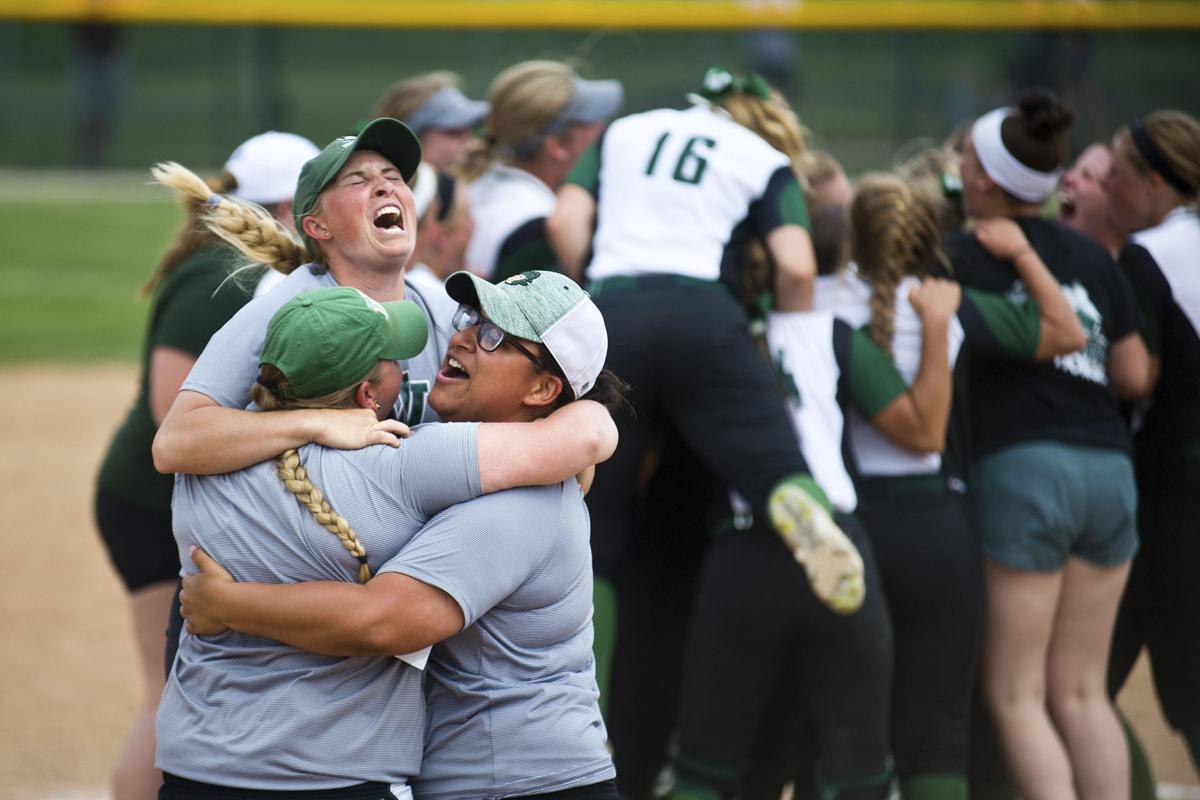 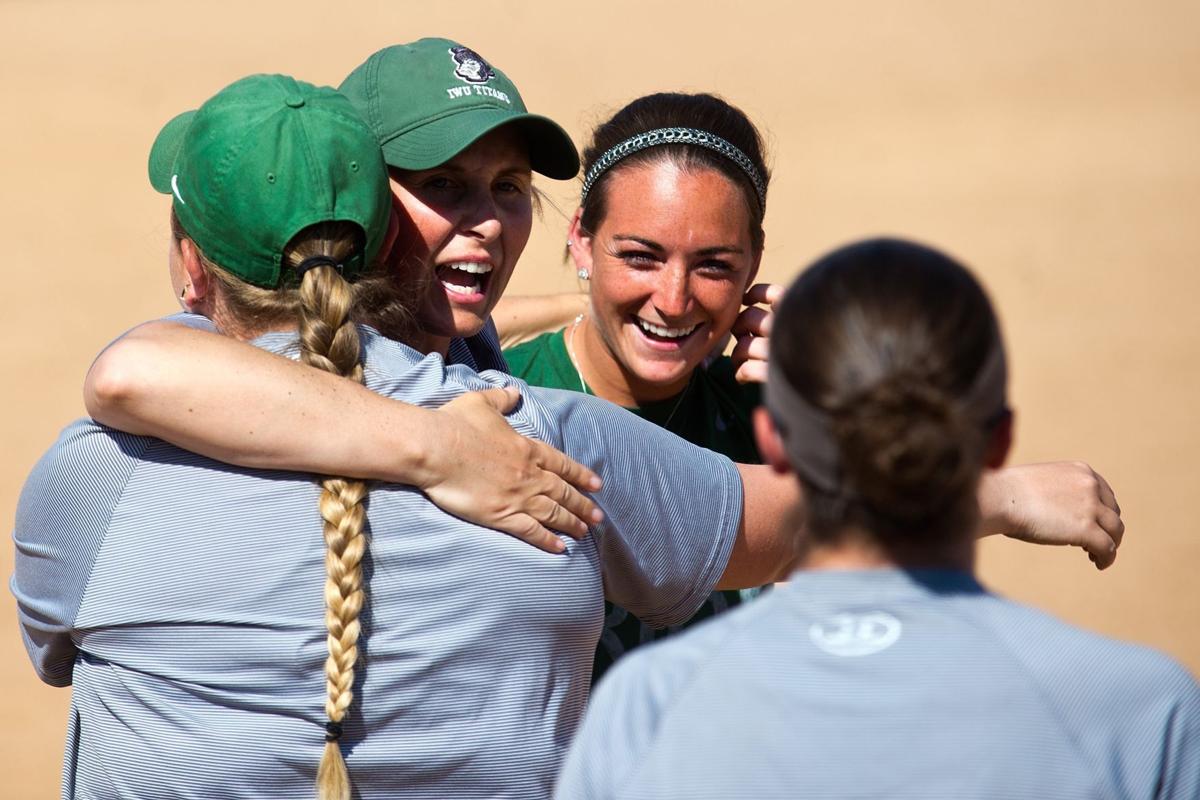 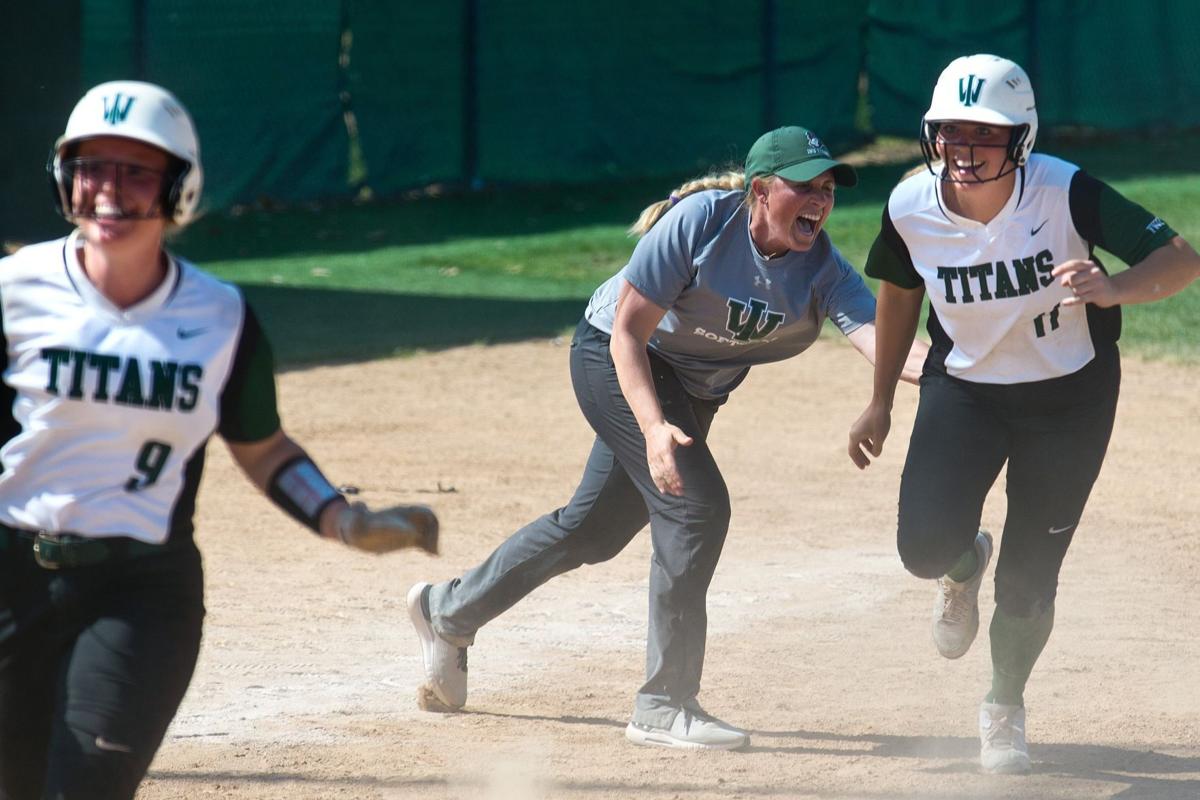 Illinois Wesleyan head softball coach Tiffany Prager, center, congratulates Julie Josten (11) during the Titans' CCIW Tournament championship game against Carthage on Saturday, May 5, 2018 at IWU Softball Field. Josten belted a grand slam in the bottom of the sixth inning to lift Illinois Wesleyan to a 7-4 win.

By whatever means available, the Titans’ pitching staff had to be rebuilt.

And while the end result of that construction project has yielded a less dominant staff than the one fronted by the All-American Wiegand, IWU has patched together an effective group as the Titans head into the College Conference of Illinois and Wisconsin Tournament later this week.

“We are a true staff. We pitch by committee,” said Prager, whose team is 24-14 and 21-9 in the CCIW to nab the No. 2 tournament seed. “Everybody seems to be ready to have the ball. If there is an opportunity for us to switch a pitcher to give a different look to hitters, we will do that at any moment.”

“In general, our team is such a new, young team. But there were no concerns with that,” Prager said. “This year has been to a certain extent a developmental year, but our team has found a way to come through in big moments and be resilient.

"For us to finish second in conference, I’m super proud of them and the way they’ve handled each game and each situation.”

A major step was taken when Grubczak, who was recruited by the Titans out of Lake Park High School, transferred to IWU from Division I Hofstra.

“It wasn’t exactly what I thought softball was going to be,” said Grubczak, who made six appearances and four starts in 2020 at the Hempstead, N.Y., school. “I wanted more of a family feel, something more fun. I love it so far. It’s what I expected softball in college to be like. I’m really grateful I got to come here.”

Grubczak leads the Titans with a 1.76 ERA and 90 strikeouts in 95⅓ innings.

“Adding Natalie to that mix has been tremendous for us this year,” Prager said.

“They help me and I help them. We really have each other’s backs,” Grubczak said. “We’ve really taken the time to get to know each other off the field. When we come on the field, it’s easier to understand each other, what we need and what we don’t need. It’s really helpful to have all of them.”

“Hayley and Kristina bring a different dynamic to our offense,” said Prager. “We truly have a lineup one through 10 that can compete.”

Palczynski is batting .317 with 40 RBIs and has tied the school record for home runs in a season with 13, six more than anyone else in the CCIW.

“Colleen has quite a bit of power to her,” Prager said. “She has really worked on being a more consistent power hitter. She’s put in a lot of hard work in practice and outside of practice.”

Palczynski helped the Titans to a fifth place national finish in 2019 with a .324 average and five homers as a freshman.

“This team is so different than freshman year. We have such different strengths, but I think we haven’t played a team we can’t beat,” Palczynski said. “It has been so fun to see how this team has grown over the season. The freshmen in our lineup have truly stepped up to fill huge roles on this team.”

Senior center fielder Hannah Heraty adds a .303 average. Turner, who plays first base when not in the circle, is at .301.

The NCAA Tournament has been trimmed by 25 percent to 48 teams this season, making it more difficult to qualify as an at-large team.

“In order for us to make it,” said Prager, “we need to win the conference tournament.”

The Titans open the double elimination CCIW Tournament on Thursday in a 5 p.m. start against Wheaton at IWU's Inspiration Field.

Kindred: The games are over, but Ally Wiegand and her Illinois Wesleyan softball teammates still winning

Here's what maybe you don't know about Ally Wiegand. She gets it. In the midst of an abrupt, gut-wrenching, premature end to her softball career, and to a potentially magical season, she gets it in a "make Mom and Dad proud" sort of way.

TYLER, Texas — Illinois Wesleyan's softball team came to the NCAA Division III Championship hoping it could better a runner-up finish from a y…

Illinois Wesleyan junior Colleen Palczynski readies for a pitch in the batter's box.

Illinois Wesleyan head softball coach Tiffany Prager, center, congratulates Julie Josten (11) during the Titans' CCIW Tournament championship game against Carthage on Saturday, May 5, 2018 at IWU Softball Field. Josten belted a grand slam in the bottom of the sixth inning to lift Illinois Wesleyan to a 7-4 win. 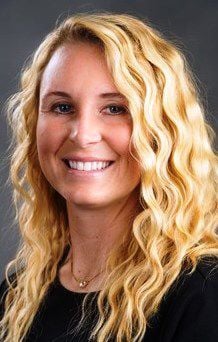