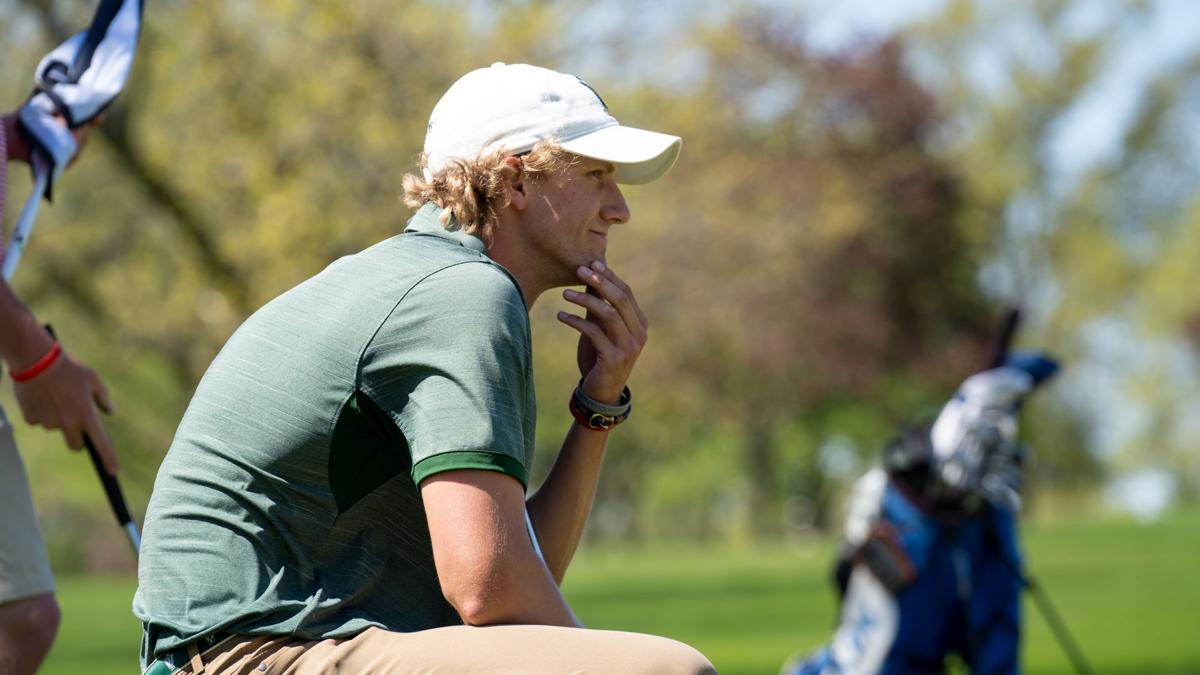 Illinois Wesleyan senior Andrew Abel looks over a putt during Saturday's final round of the College Conference of Illinois and Wisconsin Men's Golf Tournament at Weibring Golf Club. Abel shot his third straight 75 and finished tied for third individually. 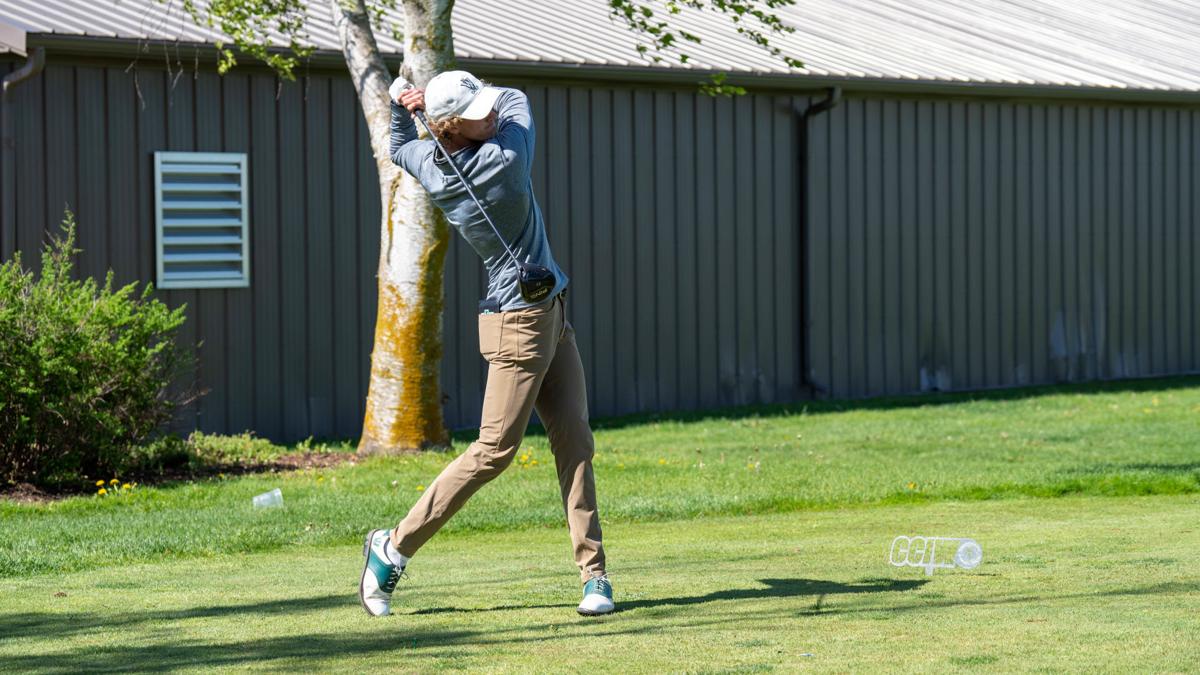 Now, the Titans can finally think about "defending" their national championship.

IWU's 11-stroke lead entering the final round of the College Conference of Illinois and Wisconsin Tournament at windy Weibring Golf Club wasn't challenged. With their five golfers all finishing in the top eight and earning all-conference honors, IWU cruised to a 27-stroke victory and their ninth straight league title.

"It was brutal and mentally grinding all day," said IWU head coach Jim Ott, who figured par was more like 78 or 79 instead of 71. "Even the holes that were downwind were tough because it was so firm you couldn't get anything to stop. Pars were good and birdies were at a premium."

Carthage's Zachary Shawhan earned medalist honors. He fired a 3-over-par 74 for a 219 total, four strokes ahead of Millikin's Tyler Reitz (75).

Senior Andrew Abel fired 75, the Titans' low round on Saturday, and tied for third with IWU junior Jimmy Morton (81) at 225. A stroke behind them were IWU seniors Rob Wuethrich (76) and Justin Park (78), who tied for fifth, while Titan sophomore Ethan Wilkins tied for eighth (80-229).

"I had it going. I was even through 15 holes," said Abel, who finished bogey-double bogey-bogey right into the 30 mph wind. "It was tough and super windy. The greens were pretty quick and the pins were tucked. It was a rough day for the team overall, but we got the job done. All that matters is nationals. We'll stay positive. We have it in us."

Morton took a one-stroke lead into the round. He was even after four holes before playing the next four in 5-over and shooting 41 on the front. Morton, who fired 67 in Friday's first round, never made a birdie.

"Putting was tough with the wind blowing. Those downhill, downwind putts were pretty quick," he said. "It was hard to get birdie looks."

Ott, who was named CCIW Coach of the Year, said the Titans began the season in "cold, rain, windy conditions," so at least it was warm with no precipitation the last two days. But the wind ...

"It will build character and mental game, too, because it's easy to give up when it's so rough," said Ott. "Everyone hung with it the whole day, too."

The Titans won their first NCAA Division III National Golf Championship two years ago, with Wuethrich and Abel part of the lineup. IWU didn't get a chance to defend last spring when the global pandemic canceled the tournament.

So IWU technically is the defending champion May 11-14 at Oglebay Resort & Conference Center in Wheeling, W. Va.

Ott said this year's team, which is ranked sixth, isn't as experienced as 2019 without veterans Drew Pershing and Ben Johnson. But Ott feels Park and Morton are battled tested and Wilkins won't let anything bother him.

Abel thinks the Titans have another title in them and has some advice for his teammates who will be playing in nationals for the first time.

"For the most part we have to stay optimistic and keep our head up," he said. "Everyone hits bad shots. It's going to happen. Treat it like any other day you're on the course with your dad."

Illinois Wesleyan stumbled a bit in the afternoon, but still leads Millikin by 11 strokes in the CCIW Golf Tournament at Weibring Golf Club heading into Saturday's final round.

Illinois Wesleyan's golf and tennis teams, which have been deemed low-risk sports, will be allowed to compete this fall.

Illinois Wesleyan's golf team was poised to become the school's first back-to-back national champion in any sport. The Titans were ranked No. 1 in the country with a power-packed lineup ... then the season was suddenly over.

Sophomore Ethan Wilkins led the way in the second round as Illinois Wesleyan maintained the lead at the midway point of the NCAA Division III Men's Golf National Championship.

Illinois Wesleyan senior Andrew Abel looks over a putt during Saturday's final round of the College Conference of Illinois and Wisconsin Men's Golf Tournament at Weibring Golf Club. Abel shot his third straight 75 and finished tied for third individually.