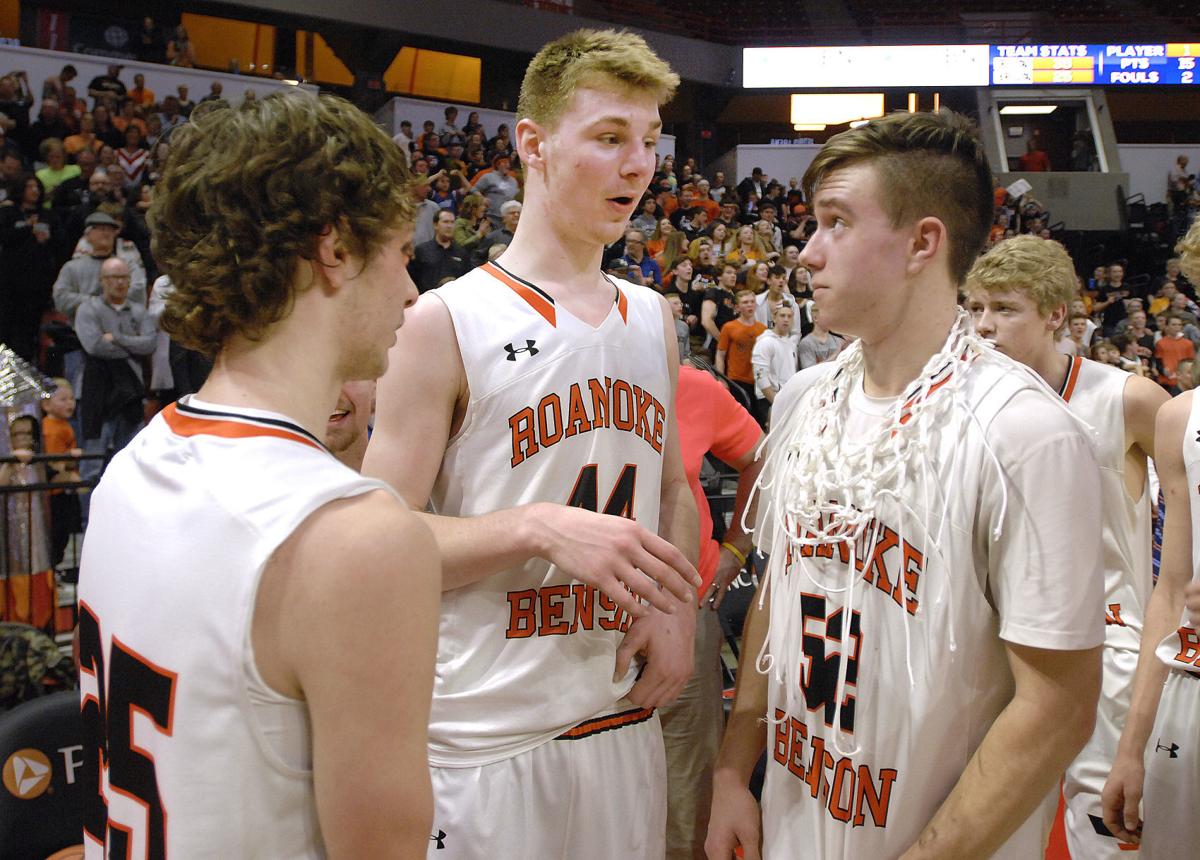 Roanoke-Benson guard Jack Weber (25), center Luke Braman (44) and forward Trent Weldon (52) looked forward to the next round of the Class 1A state tournament on Tuesday, March 10, 2020, after defeating Chicago Fenger, 45-43, in the super-sectional at Redbird Arena.

Dave Kindred, far and away the most talented Kindred sportswriter from our shared hometown of Atlanta, Ill., once offered insight into what to look for when writing a column.

Actually, the nationally renowned columnist and author has offered it more than once to students, colleagues, radio hosts, etc.

"If you see something you've never seen before, write about that."

Sometimes it's a challenge. Not today.

This week brought something none us had seen or experienced. The  coronavirus pandemic has infiltrated all aspects of life, including the one we've always leaned on to escape "real-world" calamities.

But to be clear, it was unavoidable.

Sports often reward the risk-takers among us, those who dare to drive the lane in the final seconds (Roanoke-Benson's Jack Weber in Tuesday's super-sectional) or sprint to the batters box with two outs in the bottom of the ninth.

With those "risks" only a game is on the line. This risk involves health, safety and potentially lives.

It was no contest.

We savor sports for the excitement they bring, crowds they attract, unity they inject into high school hallways, city council chambers and coffee shops.

Basketball had done all of that in Roanoke, Benson and seemingly beyond during a 36-1 run to the Class 1A State Tournament. Fans came out in force for the 45-43 super-sectional win at Redbird Arena, capped by Weber's late drive against Chicago Fenger that now stands as the season's lasting memory.

The Illinois High School Association went to the wire trying to save the state tournament and entire winter sports series. First came word early Thursday of a 60-fan limit per team for all remaining events. Then came the news Thursday evening there would be no more games.

You bet, but the right one, particularly in light of what was happening at higher levels of sport. The Big Ten Conference, NCAA, NBA, NHL, etc., all had canceled tournaments and championship or suspended play indefinitely.

In the end, each of those organizations protected us against ourselves. The lure of sports is strong enough to cloud judgment as to when to play and when to go watch others play. Rather than say "stop and think," they simply said "stop."

It made for a day unlike any in 42 years on the job. Changes locally, regionally and nationally were coming at warp speed, challenging everyone in every newsroom to keep up and keep you informed.

March Madness turned to madness in March. At one point, circa Thursday evening, a random Twitter post read: "What a year today was."

That's how it felt.

It continued into Friday with cancellation of spring sports by the Missouri Valley Conference and College Conference of Illinois and Wisconsin, falling in line behind the Big Ten and NCAA from the day before.

The IHSA has not gone that far and that's OK. There is time to see where things stand as of March 30, when the current closure of Illinois high schools is set to expire.

You feel for athletes at all levels, particularly seniors whose final year is in jeopardy or, like those at Illinois State, Illinois Wesleyan and elsewhere, has ended prematurely.

Word is the NCAA will grant spring sports seniors an extra year of eligibility. While that's good, as Illinois State track and field coach Jeff Bovee pointed out Friday to our Randy Sharer, some seniors could have jobs lined up or are set to begin medical school, etc. Coming back would be difficult or impossible.

At schools such as Illinois Wesleyan with no athletic scholarships, the cost of coming back for a fifth year would be prohibitive in most cases.

In regard to IWU, the heart aches most for the men's golf team, which won the NCAA Division III title last year and was ranked No. 2 this season, and the fourth-ranked softball team, a senior-laden squad chasing a fifth straight trip to the national finals and possibly a national championship.

The reality for those athletes and others — and it is a big one — is they have been taken out of harms way athletically. That should be a comfort to them and their families.

It is a lot to process for a young athlete chasing a big dream. There is little a coach or parent can say to make it easier. It's something we've never seen before.

Still, there is a need to talk about it, confront it, cope with it.

And, yes, write about it.

The Missouri Valley Conference has announced it has canceled all spring sports. Illinois State's athletic teams are finished for the school year.

Class 1A Final Four qualifier Roanoke-Benson received devastating news Thursday night that the IHSA had canceled the state tournament due to concerns over COVID-19.

The IHSA has canceled the remainder of its winter State Series, including boys basketball, because of the coronavirus.

Sunday morning services at Wesley United Methodist Church are expected to take place “as usual, although not ‘as usual,’” said its senior pastor, the Rev. Sara Isbell.

A patient admitted at Memorial Medical Center ​in Springfield has tested positive for COVID-19, the Sangamon County Department of Public Health said in a statement Saturday.

Kindred: The games are over, but Ally Wiegand and her Illinois Wesleyan softball teammates still winning

Here's what maybe you don't know about Ally Wiegand. She gets it. In the midst of an abrupt, gut-wrenching, premature end to her softball career, and to a potentially magical season, she gets it in a "make Mom and Dad proud" sort of way.

The NCAA is thinking about giving student-athletes in college spring sports another year of eligibility after the coronavirus outbreak canceled their seasons. Illinois State seniors not sure how many would grab that second chance.

Kindred: It's been 42 years? Indeed, and thanks to all of you, it's been a wonderful journey

That has been the gift in this and collectively, it has been provided by you. Your willingness to share your stories with a failed farmhand you just met, sometimes after an agonizing defeat, has been uplifting and overwhelming.

Kindred: Tearing down childhood home brings back a flood of memories

In the midst of a stay-at-home order, home has gone away. Irony never takes a day off.

Kevin Schultz was like most of us. He spent Easter Sunday at his Bloomington home with his wife, Kim, relaxing and watching television.

Kindred: Erik Hubbard's presence remains strong with his family 28 years after his death

Who was Erik Hubbard? He was a 12-year-old with compassion for others, an undeniable spirit, wisdom beyond his years and headaches that would …

Roanoke-Benson guard Jack Weber (25), center Luke Braman (44) and forward Trent Weldon (52) looked forward to the next round of the Class 1A state tournament on Tuesday, March 10, 2020, after defeating Chicago Fenger, 45-43, in the super-sectional at Redbird Arena. 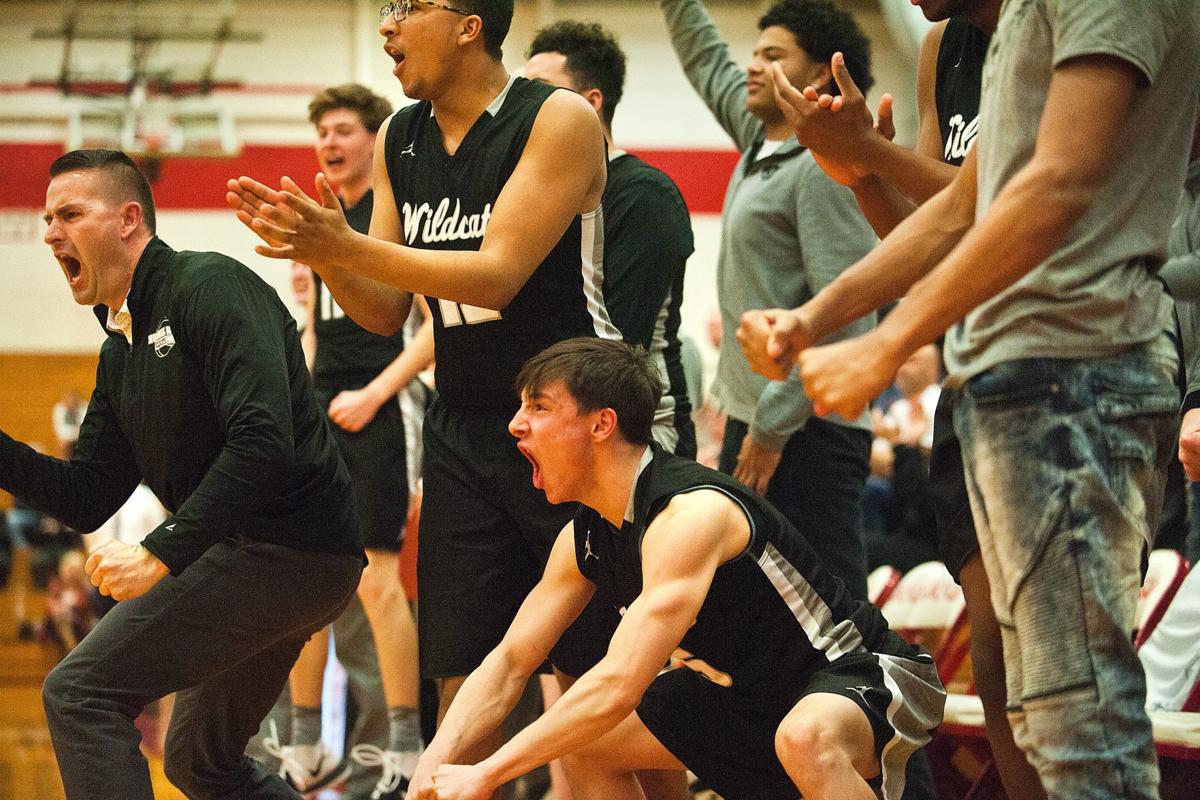 Normal West High School's bench erupts after a score during the Wildcats' 62-47 Class 4A sectional semifinal victory over Normal Community on Tuesday, March 10, 2020, at Pekin.