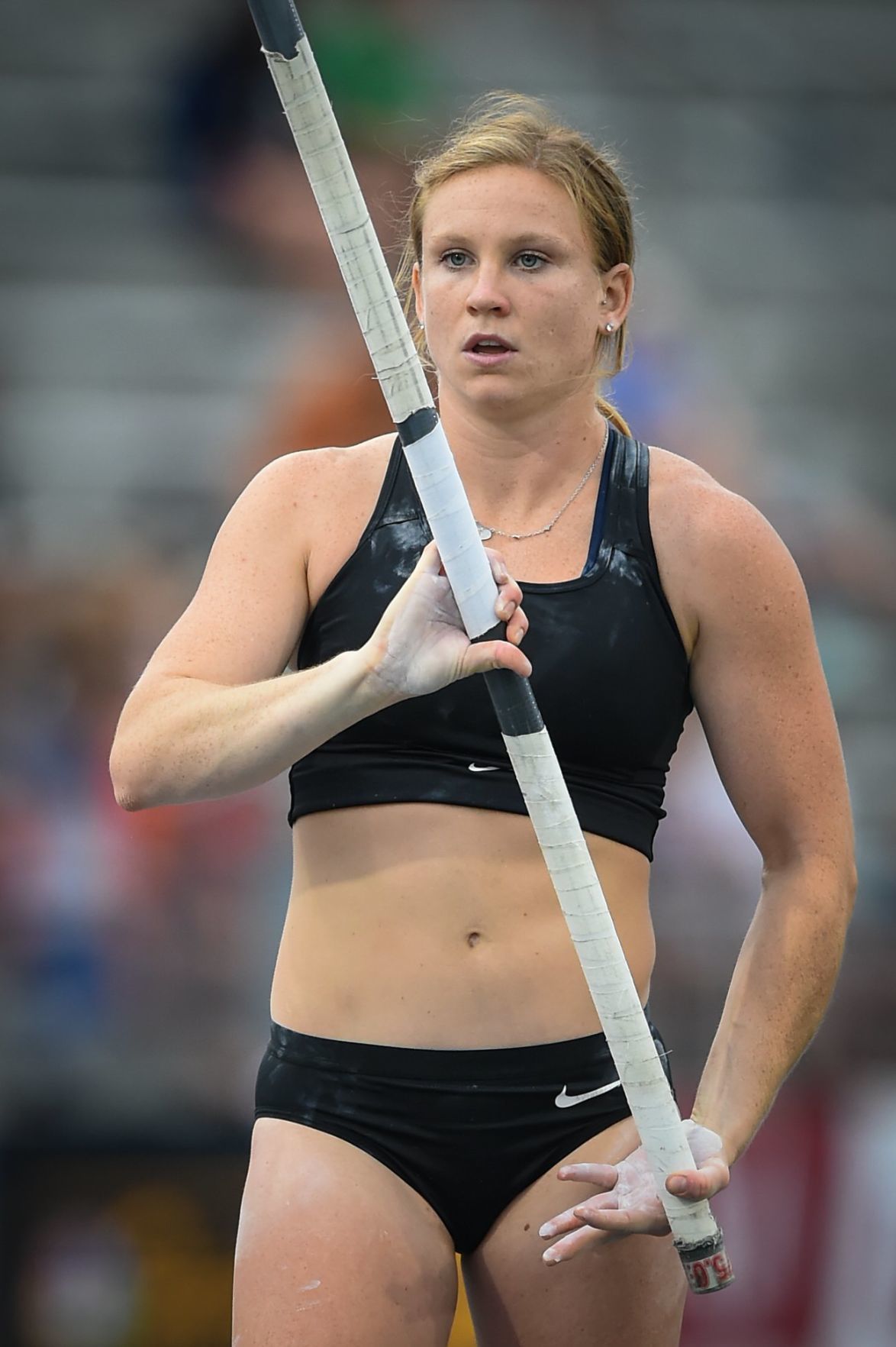 Pontiac native Emily Grove hopes to see herself qualify for the 2021 Olympics in the pole vault. 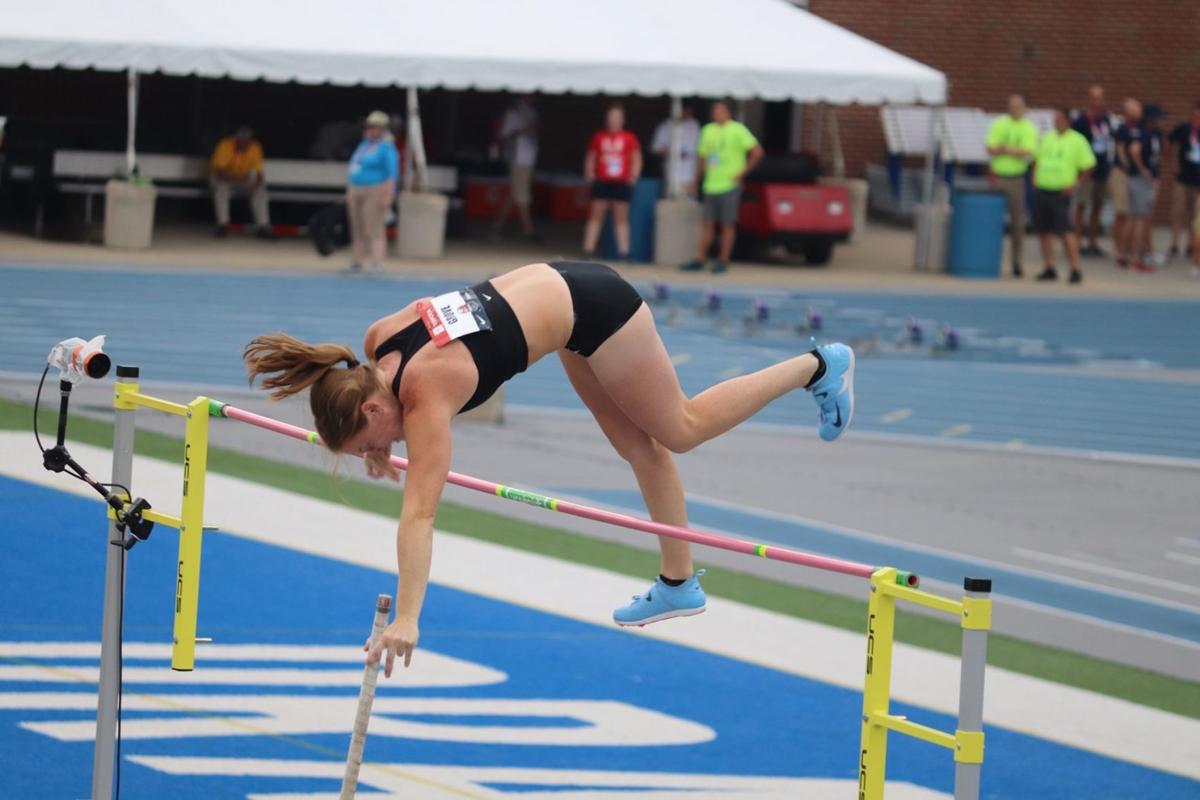 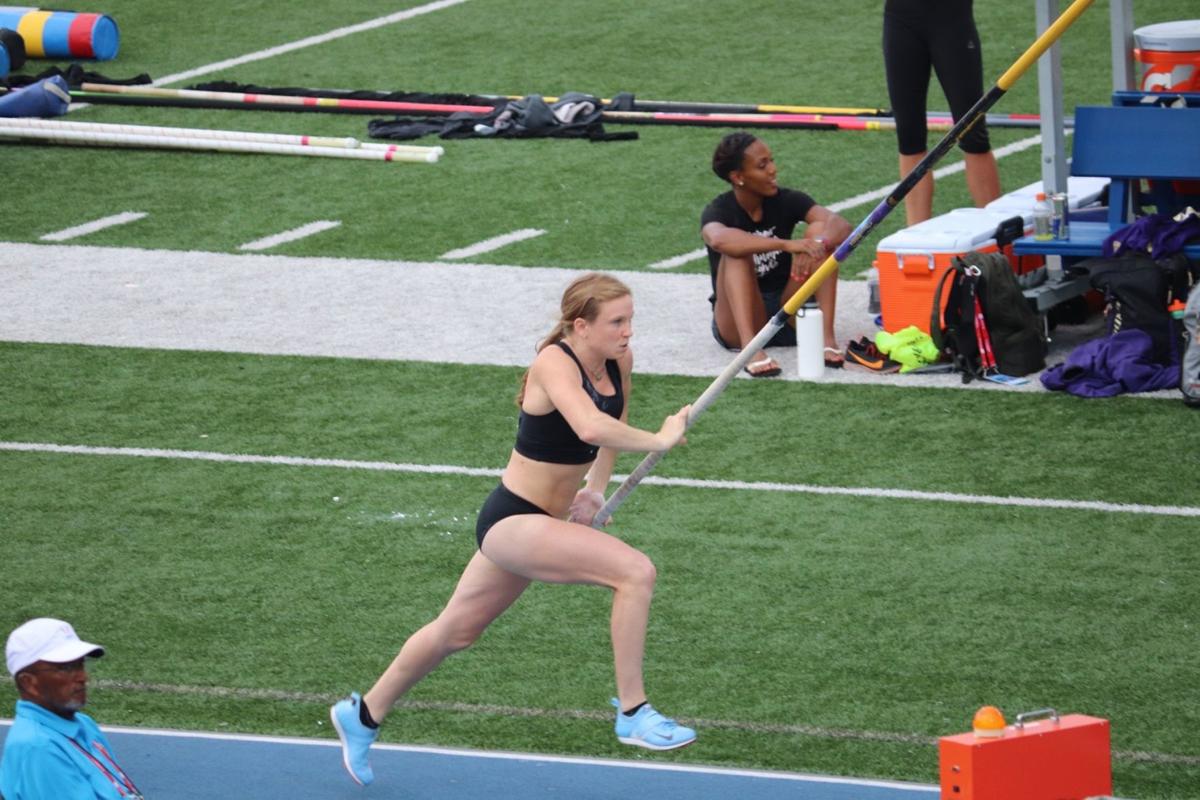 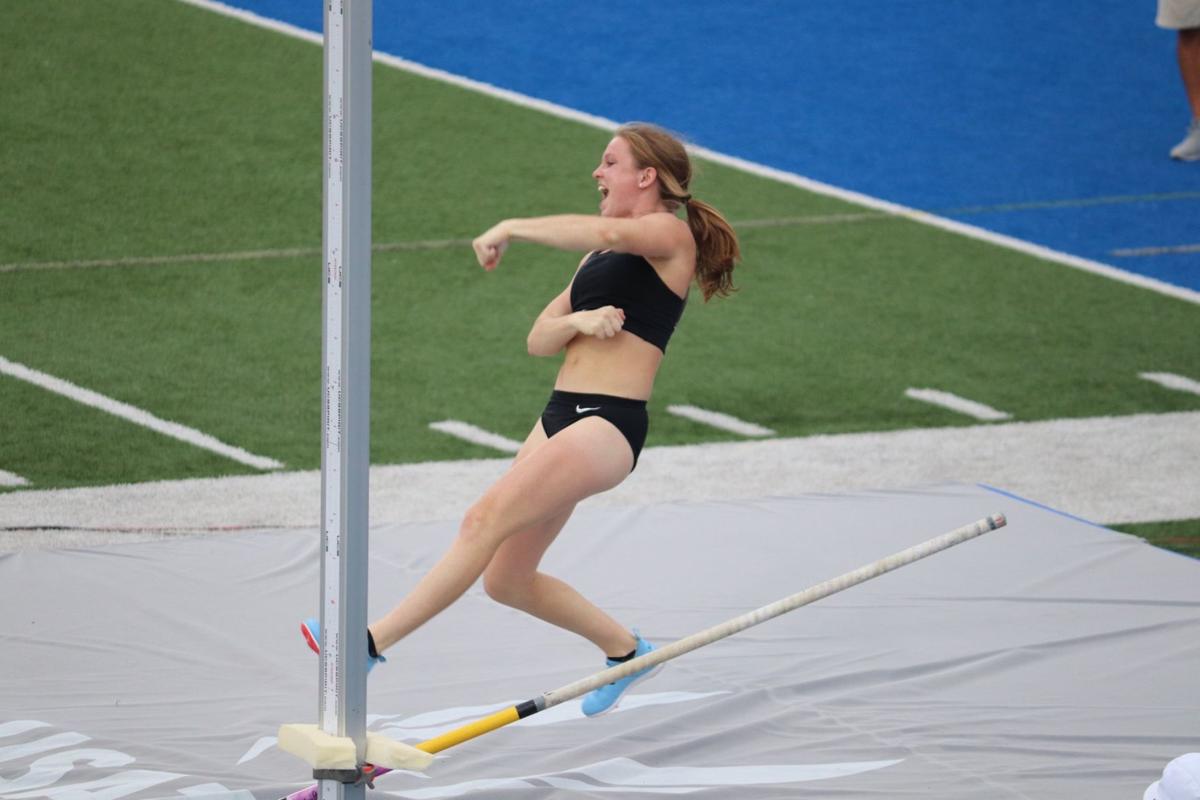 Four days after pole vaulting a lifetime best of 15 feet, 3¼ inches last July, Pontiac native Emily Grove notched another career best of 15-5. Only 14 women in the world and only four Americans went higher in 2019. 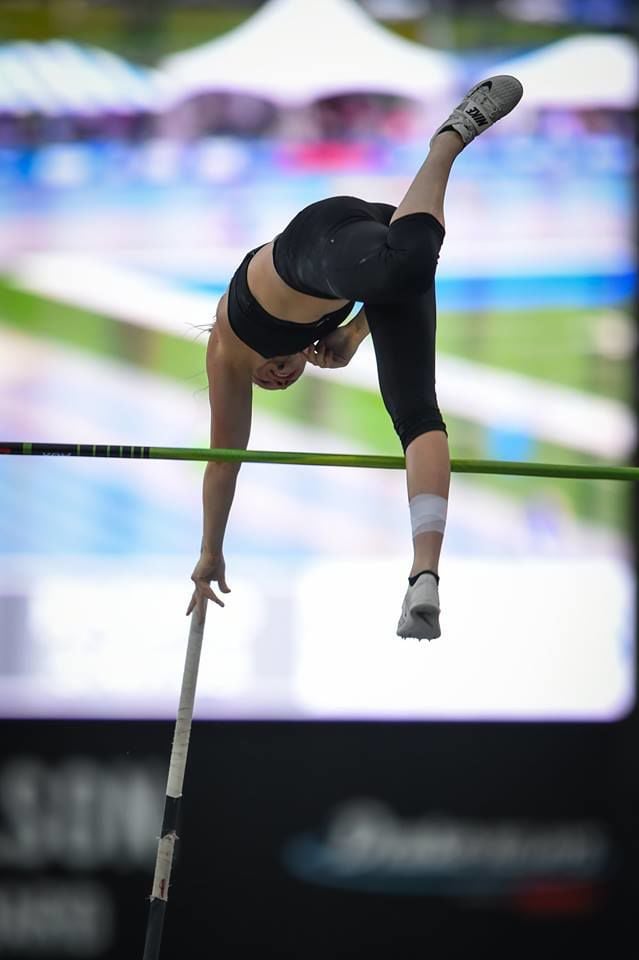 Having recovered from a minor Achilles' tendon injury, Pontiac pole vaulter Emily Grove is glad she has more time to prepare for the 2021 Olympics, which were postponed one year by the coronavirus pandemic. 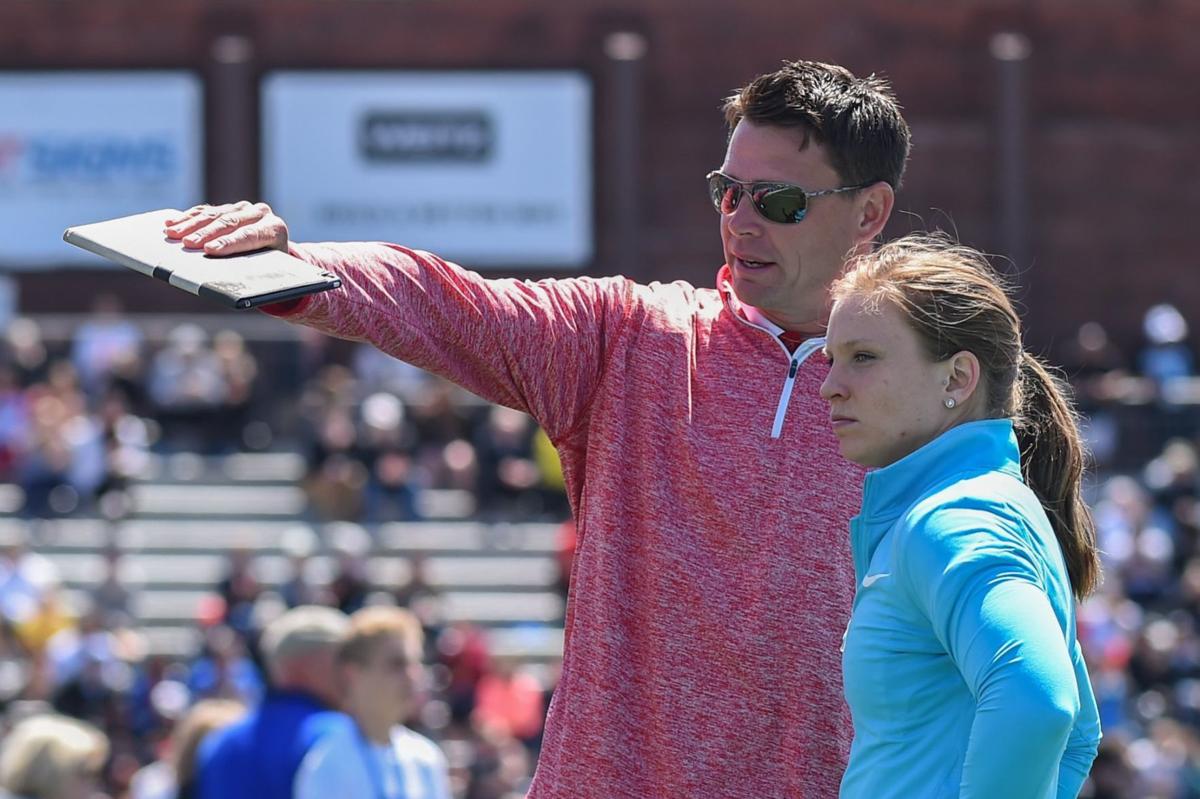 Leave it to an Olympic hopeful to show ways to be productive during a pandemic.

Emily Grove, the pole vault pro from Pontiac, says her training group is "working on stuff we're not very good at."

The 27-year-old, who also works in the financial aid office of her alma mater — the University of South Dakota in Vermillion — is good at a lot of stuff, but there are always fine points to polish when you hope to improve upon a career best of 15 feet, 5 inches.

In 2019, only 14 women in the world and four in the USA went higher than Grove, who wants to go even higher.

That's why Grove is working on plyometric exercises and lifting weights in an explosive fashion on a friend's driveway as she trains for the 2021 Tokyo Olympics.

"I'm not super quick off the ground," explained Grove, a six-time All-American in college and a two-time state champion in high school. "Hopefully, it makes me a little bit faster, a little bit more efficient on the runway, which is always a main goal for me. This is a perfect time for me to work on that."

Like many stars, Grove never tires of working on her craft.

"It's a challenge every day," she said. "I'm always working on something new. I'm a couple years post college and I'm still learning things about my jump. I'm still figuring stuff out and I'm still having fun with it.

"You might make a little bit of a change and you might have a significant result that will give you a couple more inches in the air. That kind of stuff is really cool to me and really interesting."

Helping Grove have fun is her college coach Derek Miles, a three-time Olympian and the 2008 Olympic pole vault bronze medalist. Grove says their relationship has evolved since they first started working together in 2011.

"I'm a little more independent than I was in college," Grove said. "Now it's more of a collaborative effort on training. Derek still writes the bulk of my training, but if I have something that I feel I want to work on — like incorporating more plyometrics for example — he kind of teaches me and guides me on how to do that."

At a low-key meet last year, Grove failed to clear 14-11. After the competition was over, Miles suggested she take an attempt at 15-7, a height only nine women in the world surpassed in 2019.

"That whole month of June I was kind of just clicking," Grove said. "My confidence was up. I was jumping about the same every session, which I felt was showing that I was ready to go."

That changed when her Achilles' tendon began hurting, forcing her to stop vaulting for three weeks in July prior to the USATF Championships in Des Moines, Iowa, where she cleared a personal best of 15-3¼ to finish fourth.

"It just shows I was doing the right things to set myself up to jump well," said Grove, who nearly made 15-5 to qualify for the World Championships. "So that was pretty cool."

"I actually did not have great warm-ups in Omaha," she said. "I started out at a low bar. I just tried to work through some gears. Then all of a sudden the bar was at 4.70 meters (15-5). I blew through on my first (attempt). I grabbed a new pole and I cleared it on my second attempt.

"The jump felt pretty good. I remember I was kind of going over the bar (thinking), 'Man, I hope I don't knock this down.' It stayed up. I was very excited about that. I've been chasing that bar for a while."

Miles celebrated in an "it's-about-time-you-did-it" manner.

Due to her Achilles' tendon issues last year, Grove isn't disappointed the Olympics were postponed until 2021.

"I was a little bit — I don't want to say behind — but I was taking my time, just trying to let that heal," she said. "Postponing it actually has kind of benefited me so I can train pretty hard right now while there are no meets and kind of get my feet back under me."

The pandemic has prevented Grove from training on South Dakota's campus.

"Basically, a couple USD vaulters and myself have been training at the high school track here," said Grove, who is sponsored by Texas-based pole manufacturer Essx.

"I blew through my biggest pole, which means it was too small. They sent me two longer ones within the week. They've been really on top of it getting me the poles I need to be able to perform."

Like most world class vaulters, Grove has had issues transporting poles.

"Katie Nageotte and I were walking through an airport in Italy and these people were trying to get us to put the poles on the elevator, but obviously those poles won't fit on the elevator," Grove said. "We tried to communicate that and find a stairwell."

After competing in Minsk, Belarus, last year, Grove boarded a plane for home thinking her poles were also on board. They weren't.

"I had to have them cargo-shipped back," she said. "It took about two weeks before I saw my poles again. It's a good thing that was at the end of the season."

As for her career, Grove isn't looking to end it anytime soon.

SACRAMENTO, Calif. — Area products Emily Grove and Dani Bunch will be heading to the World Championships in London after placing among the top…

The Illinois High School Association was set to unveil its plan to return high school sports Friday. However, that won't announcement come until Monday at the earliest.

Pontiac native Emily Grove hopes to see herself qualify for the 2021 Olympics in the pole vault.

Four days after pole vaulting a lifetime best of 15 feet, 3¼ inches last July, Pontiac native Emily Grove notched another career best of 15-5. Only 14 women in the world and only four Americans went higher in 2019.

Having recovered from a minor Achilles' tendon injury, Pontiac pole vaulter Emily Grove is glad she has more time to prepare for the 2021 Olympics, which were postponed one year by the coronavirus pandemic.