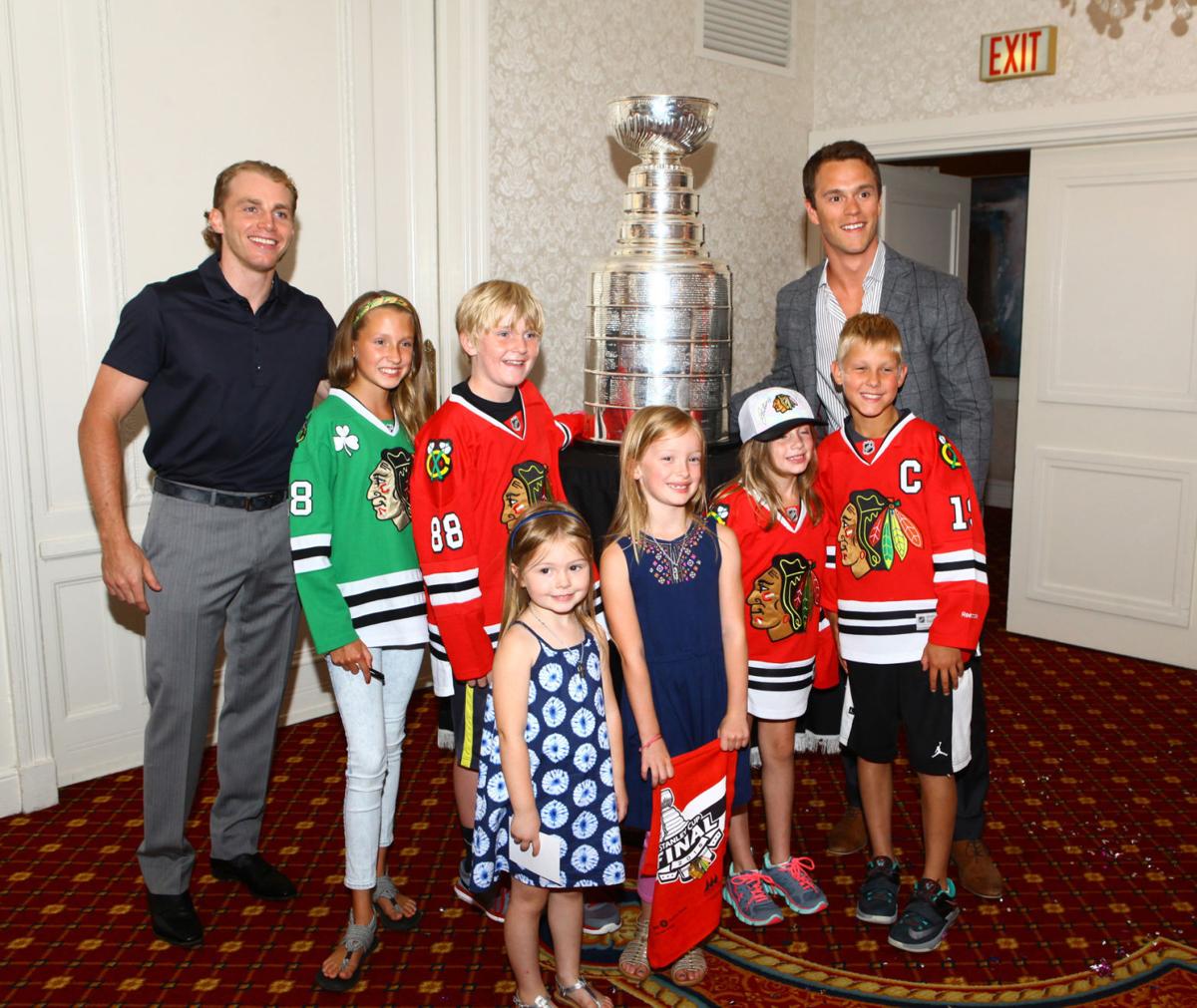 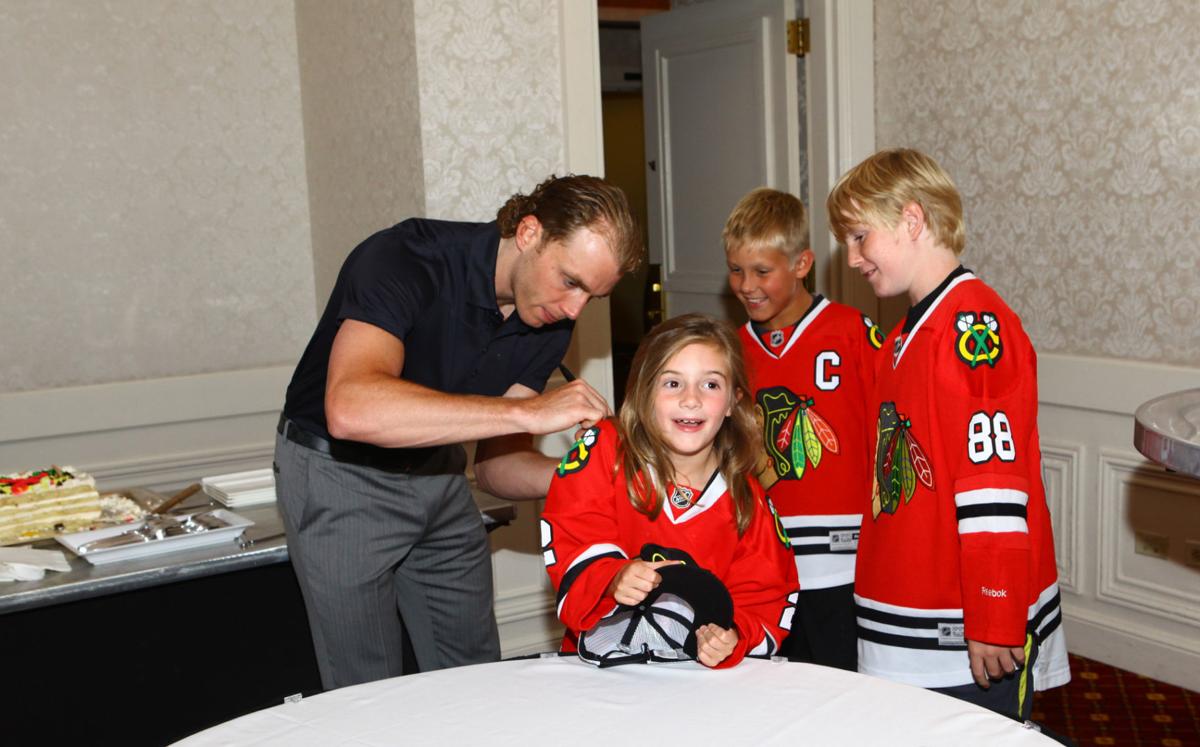 Kane signs the back of Kate Jones' jersey on July 17 as Jack Jones, right, and Hayden Bittner look on during the Blackhawks Convention in Chicago. The Blackhawks hosted a private session for the families of the seven victims in a April 7 plane crash east of Bloomington. Hall of Famer Denis Savard and head coach Joel Quenneville were also on hand.

Pain rooted deeply in the soul never really leaves. It subsides on occasion, but always it is there.

None of us can know what that’s like for the families of Jason Jones, Scott Bittner, Aaron Leetch, Terry Stralow, Torrey Ward, Andy Butler and Tom Hileman, the men who died April 7 in a plane crash east of Bloomington.

We may speculate it is a battle waged day to day, but likely it is hour to hour, minute to minute. From the outside we can only offer support, try to help in some small way.

The Chicago Blackhawks did so last week on the opening day of their annual convention, inviting the families to a downtown Chicago hotel for a private session with Blackhawks personnel.

Hall of Famer Denis Savard and head coach Joel Quenneville were there. So were Patrick Kane and Jonathan Toews, faces of a franchise celebrating a third championship in six years. The Stanley Cup was in the room as well, shiny and photogenic as ever.

Ella Bittner is an avid Kane fan. Getting the chance to meet him … “She was beyond happy,” said her mother, Carrie Bittner.

Hayden Bittner and Jack Jones play youth hockey at Bloomington’s Pepsi Ice Center. They love the game and the Blackhawks. Suddenly, they were face to face with the team’s coach and its two biggest stars.

“They got to meet some people that they know and have always looked up to,” said Lyndsey Jones, mother of Jack and Kate. “But it’s very bittersweet.

“They always wanted to meet these players and see the Stanley Cup. It was kind of a dream come true, but the reason it came true is a horrible reason.”

There is no escaping that numbing reality. Even when their hearts are warmed, they continue to ache.

Lyndsey Jones called the Blackhawks’ gesture “wonderful” and “kind” and “thoughtful,” adding, “It’s nice to see a big organization support a smaller community. That was really meaningful and we’re all appreciative of that.”

“The reason we were all there is because their dads are not,” she said. “That really stinks.”

Carrie Bittner felt it, too, saying, “We would have loved for our husbands to be there with us. Bittersweet is probably the perfect word for it.”

Carrie and Scott Bittner were partial season ticket holders of the Blackhawks. They followed them closely, prompting Ella and Hayden to do the same.

Terry Stralow had an allegiance to the team as well. He owned Pub II in Normal, an official Blackhawks bar.

His wife, Joan, attended the July 17 event with her sister, brother in-law and nephews. Jamie Fox, Andy Butler’s fiancèe, also was there along with Illinois State Director of Athletics Larry Lyons and his wife, Maureen.

“The families are dealing with things most of us can’t comprehend,” Larry Lyons said. “I think something like this helps. It's a diversion. It takes the mind off of some of the bad thoughts.

“They are all such good people and they are dealing with such tragic circumstances. It’s heartbreaking. Everyone is trying to do the best they can to help them get through this.”

Lindsay Leetch appreciates that. Her young daughters are not hockey fans, she said, but could tell “how cool it was” to be with the Blackhawks from watching the other children.

They saw Toews, Kane, Quenneville, et al, sign autographs, engage in conversation and pose for as many photos as the group desired. They also saw the Blackhawks surprise Jack Jones with a cake on his 10th birthday.

“People have been incredibly generous with their time and the things they offer and put together,” Leetch said. “So yes, absolutely it helps. But in the grand scheme and in the big picture, you wish none of it ever had to be.”

“There aren’t many words to express the outpouring of support the community has shown,” Carrie Bittner said. “It’s a bit overwhelming at times.

“We’d give anything to have our husbands back and have our lives back the way they were. But anything that brings a smile to my children’s faces, it’s worth it for me as a parent.”

BLOOMINGTON — Loss of control by the pilot, darkness and poor visibility caused the April 7, 2015, plane crash that killed seven men near Cent…

Kane signs the back of Kate Jones' jersey on July 17 as Jack Jones, right, and Hayden Bittner look on during the Blackhawks Convention in Chicago. The Blackhawks hosted a private session for the families of the seven victims in a April 7 plane crash east of Bloomington. Hall of Famer Denis Savard and head coach Joel Quenneville were also on hand.