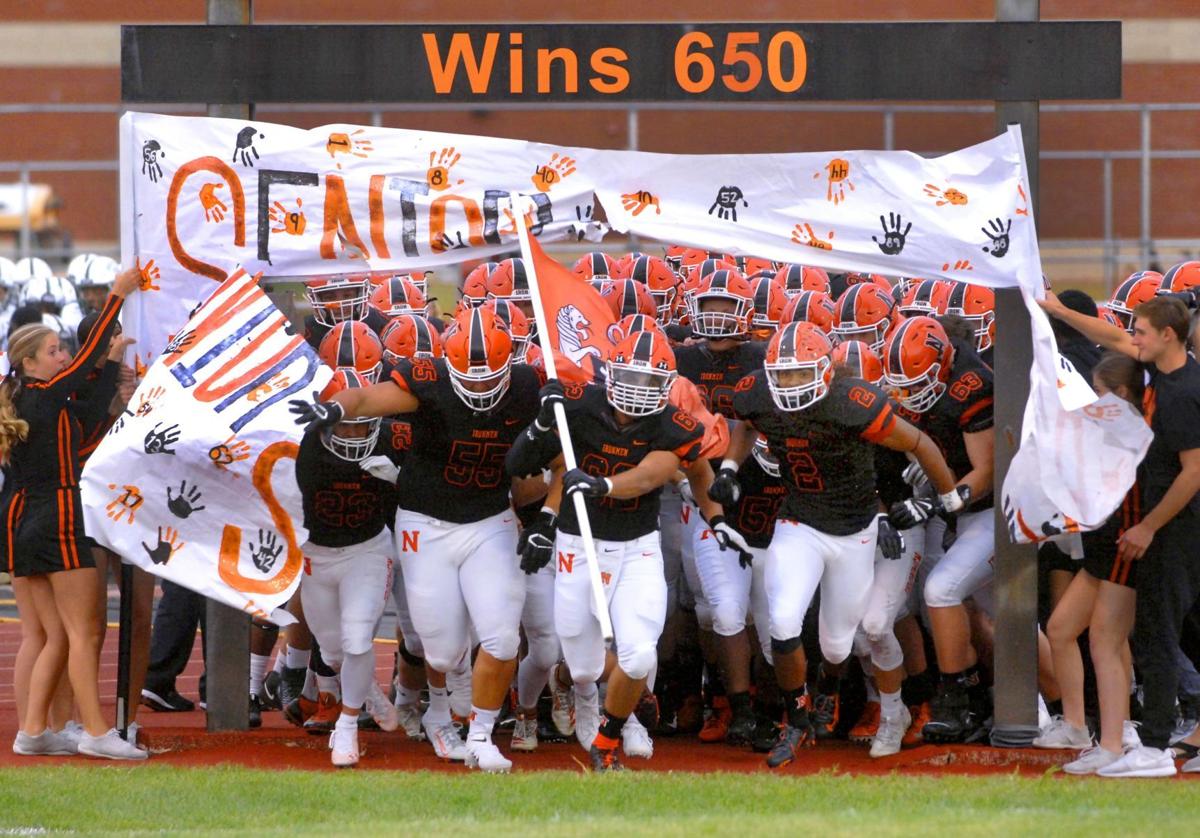 The Normal Community High School football team won't break through any banners for a while now that the IHSA has moved the season to a Feb. 15-May 1 time frame along with girls volleyball and boys soccer. 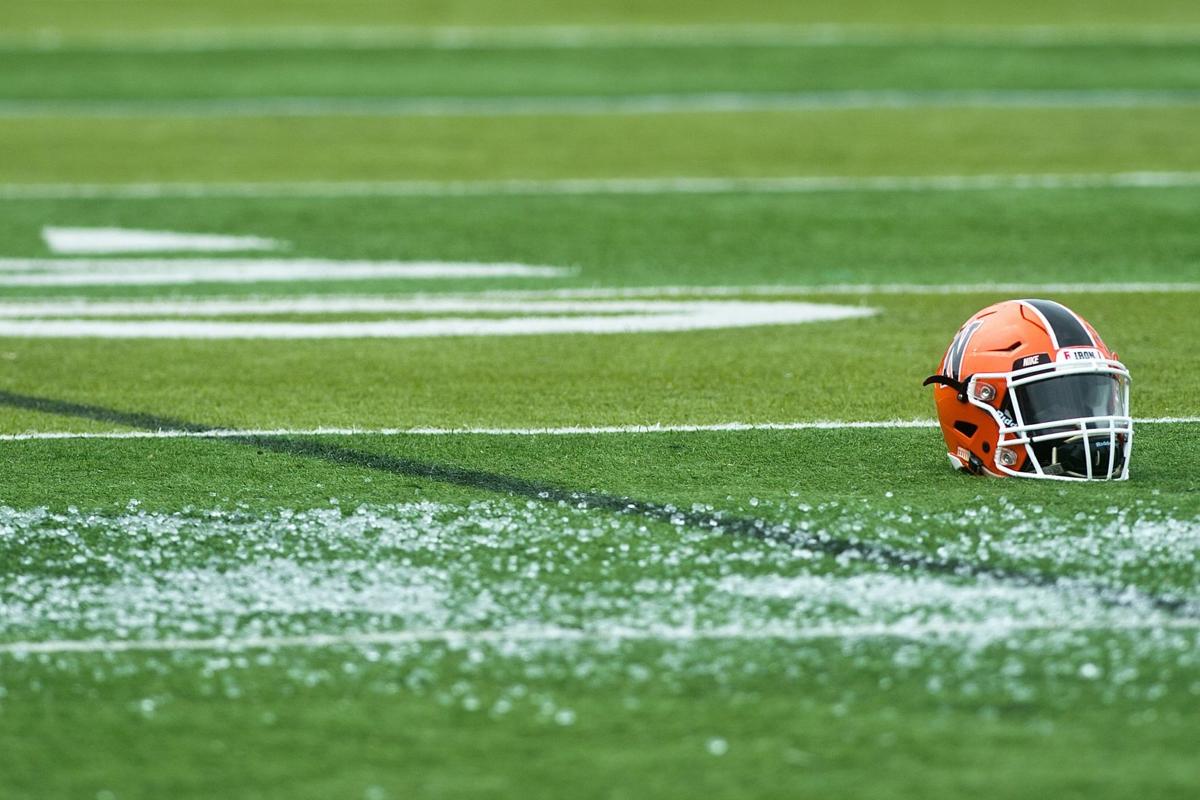 Artificial turf football fields such as the one at Illinois Wesleyan's Tucci Stadium could come in handy now that the IHSA has moved the season to a Feb. 15-May 1 time frame along with girls volleyball and boys soccer.

BLOOMINGTON — The Illinois High School Association's Wednesday announcement that each sport would have a season during the 2020-21 school elicited gratitude from a sampling of Pantagraph area athletes, coaches and athletic directors.

Fearing their seasons would be cancelled due to the pandemic, those contacted were happy they could still hope for competition regardless of safety restrictions.

The biggest adjustments involved moving the football, girls volleyball and boys soccer seasons from the fall to a Feb. 15 to May 1 time frame.

"It's going to be cold, but I'm just glad for now our kids will have an opportunity to play," said LeRoy football coach, track coach and athletic director B.J. Zeleznik. "I think the IHSA, in an incredibly difficult position, did about as well as they could have."

"It's going to be a little bit different," added Normal West football coach Nathan Fincham. "It's something. I'll take it.

"They tried to do the best they could. My worst fears were that it would be cancelled all together. From that perspective, I'm pretty happy."

The IHSA's announcement could discourage athletes from moving to states that still allow sports. Subject to change, Indiana and Missouri plan to offer sports as scheduled while Wisconsin planned a delayed start.

"I had heard that from a lot of people," Fincham said. "Luckily for us being in the middle (of the state) kind of made it difficult for people trying to jump to the other side of the border."

"I'm disappointed we're not playing this fall, but I am excited that we have an opportunity to play in February," he said. "That's not really spring yet. We're going to have to invest in some more hand warmers and bigger coats. I know our kids are going to feel good about having the opportunity to play."

Braught is especially glad the IHSA scheduled seasons so basketball and baseball players, for example, can still play football as well.

"That's a huge thing, especially at a school our size," he said. "For any of our programs to be successful, we have to share athletes."

Fieldcrest's Jaxon Cusac-McKay, the reigning Pantagraph Area Male Athlete of the Year, is disappointed football can't be in the fall.

"You just can't control a lot of things going on with this whole situation," said Cusac-McKay, who also stars in basketball. "Hopefully, we'll be able to play."

Asked if he will discontinue football training to prepare for the Nov. 16-Feb. 13 basketball season, Cusac-McKay said, "I'm always kind of working on both almost every day."

"As long as it's moved to the spring, I'll still be happy," he said. "I think we still have a lot of potential."

Normal West track star Leslie Fisher, a senior who also plays football, had hoped to hit the gridiron next month.

"It kind of sucks because we have to wait so much longer to get on the field," he said. "Them pushing it back to the spring is way better than cancelling it."

Bloomington athletic director Tony Bauman, whose school has an artificial turf field suited for February football and soccer, said, "My initial reaction was that I'm grateful that the IHSA has worked so hard to not cancel any seasons, to leave open the chance for all of our athletes to have a season."

BHS volleyball coach Joe Sanders, who also works for the Illini Elite Volleyball Club, said some of the biggest club volleyball tournaments in which athletes gain exposure to college recruiters occur in February.

"I know other states have made exceptions for club play during high school play already because they are moving things around," he said. "That is something maybe Illinois is going to have to address."

"We're just thrilled there is going to be a chance for the kids to compete," he said. "We're not exactly sure what it's going to look like format wise and schedule wise."

"I'm happy for all kids, not just our team," he said. "Everybody will have a season. I know for the seniors in the spring, that was disappointing for them to lose the opportunity to compete. It may not be exactly when they want, but at least they will still have an opportunity."

Two-time cross country all-stater Kaitlin Skeate of BHS, who also plans to compete during the Aug. 10-Oct. 17 girls swimming season, was excited about the news.

"Any chance to get to race is good," said Skeate, who also plans to run during a May 3-June 26 track season. "It will be hot (in June), but it will be good. I'm just excited to run. I've been working really hard since the end of cross country. To get to see it pay off soon is going to be so exciting."

"I think overall we feel very fortunate, obviously," York said. "We have to give great thanks and respect to the leaders of the IHSA and the leaders of our state to do their due diligence to figure out if they could put this together to let our student-athletes have a season.

"We have to be grateful for the golf agencies around the state that have been putting on tournaments throughout the summer to help prove that it's safe to do golf."

Pontiac golfer Dani Grace Schrock, who tied for third in last year's Class 1A state tournament and won as a freshman, feared her season would be cancelled.

"I'm really thankful that it's happening," she said. "When I saw that, I was definitely relieved because I knew there was talk that it might not happen. It's not high school without high school golf for me."

What does IESA decision mean for IHSA fall sports?

The Illinois High School Association (IHSA) announced Tuesday it will postpone its board meeting scheduled for Wednesday, July 22, at which it was expected to discuss how to proceed with the fall sport season.

The Normal Community High School football team won't break through any banners for a while now that the IHSA has moved the season to a Feb. 15-May 1 time frame along with girls volleyball and boys soccer.

Artificial turf football fields such as the one at Illinois Wesleyan's Tucci Stadium could come in handy now that the IHSA has moved the season to a Feb. 15-May 1 time frame along with girls volleyball and boys soccer.