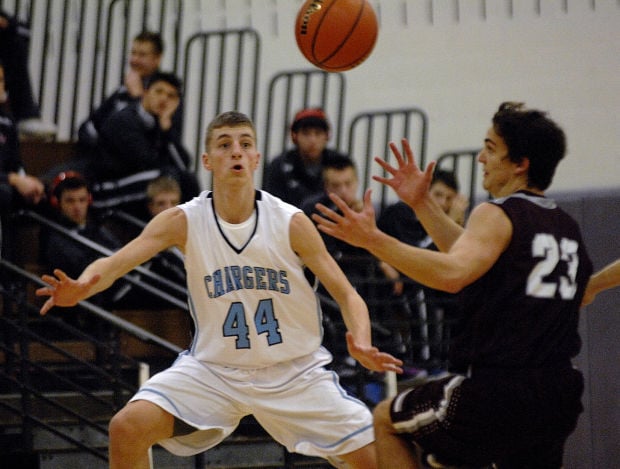 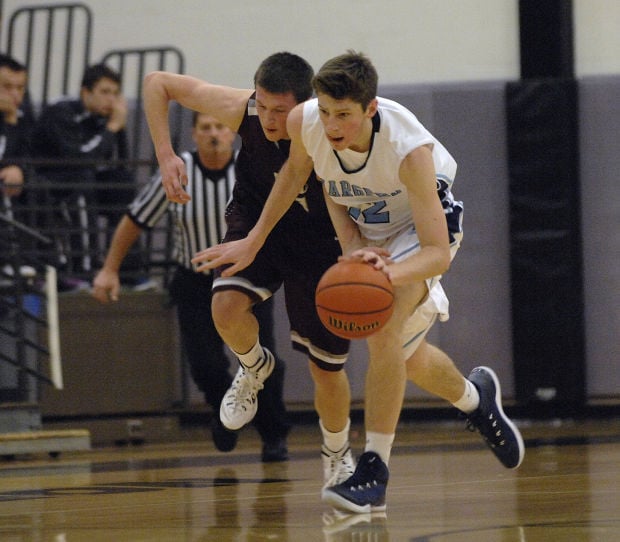 Champaign Centennial's Nick Finke, right, steals the ball from IVC forward Matt Keffeler during a State Farm Holiday Classic game on Friday at Normal West. Finke, a junior, is drawing interest from some Division I and Division II colleges.

NORMAL — As Nick Finke ran down the court after scoring Friday in a State Farm Holiday Classic first-round game, he heard the public address announcer crediting the basket to his younger brother, Tim.

“Our names get mixed up all the time because we’ve always been really close,” he said afterwards, laughing. “People always call us different names.”

Make no mistake about one thing — the name Finke is quickly becoming synonymous with Champaign Centennial High School’s basketball program.

Nick, a 6-foot-7 junior forward, and 6-5 freshman guard Tim Finke are following in the footsteps of their older brother Michael, who is redshirting in his first year at the University of Illinois. They are starting together for the Chargers, who are the No. 3 seed in the Large School Boys bracket.

“I’ve never played with a sibling before,” said Nick, who was on Centennial’s junior varsity last season when Michael starred on the varsity. “To play with one is pretty cool and have the connection on the floor is fun.”

Tim Finke, who already is drawing recruiting interest from Division I schools, has made a smooth transition from junior high.

“It’s always nice having a brother around to help you out and get used to the system,” he said. “Coming in as a freshman I didn’t know what to expect … but so far so good.”

The three Finke brothers all play a different type of game.

Michael Finke is a stretch power forward who can draw defenders away from the basket with his 3-point shooting ability. Nick Finke is more of an inside player, while Tim Finke is an adept ball handler who also is a dangerous perimeter threat.

“They’re all pretty fundamentally sound and compete hard and look for each other and make the extra pass,” said Centennial coach Tim Lavin.

All the Finkes not only have been coached by Lavin at Centennial, but also by their father.

Jeff Finke, a former Illinois basketball and football player, is a coach with the Illinois Irish out of Peoria in the AAU circuit. Nick Finke said their father was “pretty hard, but it was fun having him as a coach.”

"It's twice as easy," said Jeff Finke, because there are not as many games to attend.

“God kind of made them all different in terms of their size and athleticism,” said Jeff Finke of his sons. “They all work on all the skill sets, but they’re all a little different.”

Michael Finke is almost 6-10 now, according to his father. Whether Nick or Tim reaches that height, their father isn’t sure.

“I stopped guessing when Michael hit 6-7. I think he’s done,” said Jeff Finke. “Nick was 5-8 in eighth grade. He didn’t get excited about basketball until last year. They prepare like they’re never going to grow again, and if they grow they’ll learn a few new positions.”

Nick was the latest Finke to develop into a prospect. His father said Nick enjoyed a breakout summer with the Illinois Irish and began drawing interest from a few Division I and II schools.

Tim Finke, who has always played up with older players, already is getting interest from high-major programs. He learned some valuable recruiting lessons watching his oldest brother "off the court and on the court how to handle everything."

"I'm handling it slow now. In the summer AAU it will pick up harder," he said.

Lavin said Tim Finke has been accepted well by his older teammates with the Chargers.

"It's hard not to. He plays hard and is a good player," said Lavin. "He leads the team in assists. He does what he’s supposed to do."

The youngest Finke has the composure of a junior or senior on the court.

"I'm finding them and they're finding me," said Tim Finke. "I can't really complain how it’s going. I’m starting, so that’s pretty good."

BLOOMINGTON — There was an Alex Peacock dunk and some swished 3-pointers from Tyler Seibring. Yet, the biggest crowd pleaser late Saturday nig…

Champaign Centennial's Nick Finke, right, steals the ball from IVC forward Matt Keffeler during a State Farm Holiday Classic game on Friday at Normal West. Finke, a junior, is drawing interest from some Division I and Division II colleges.