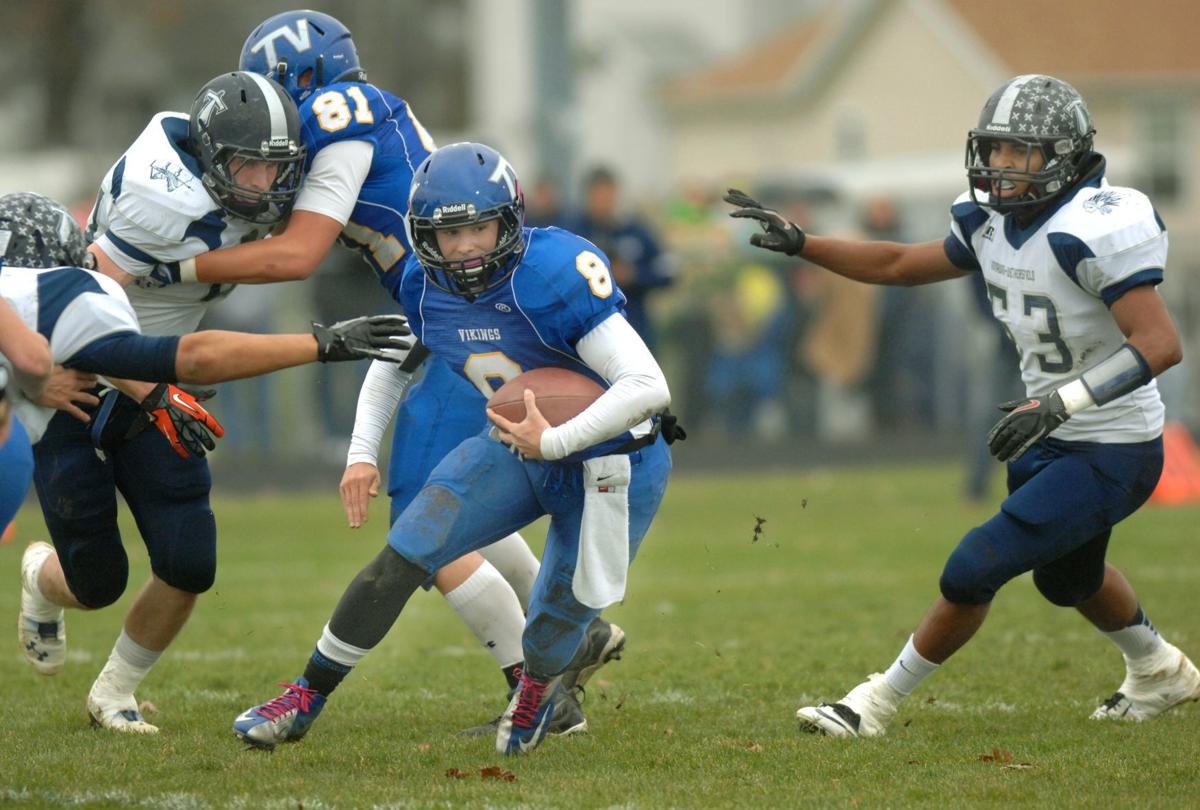 Tri-Valley's Blake Cowden (8) is pursued by Annawan-Wethersfield defenders in first half action in Downs on Nov. 3, 2012. Cowden, the 2013 Pantagraph Male Athlete of the Year, died last week at age 24. 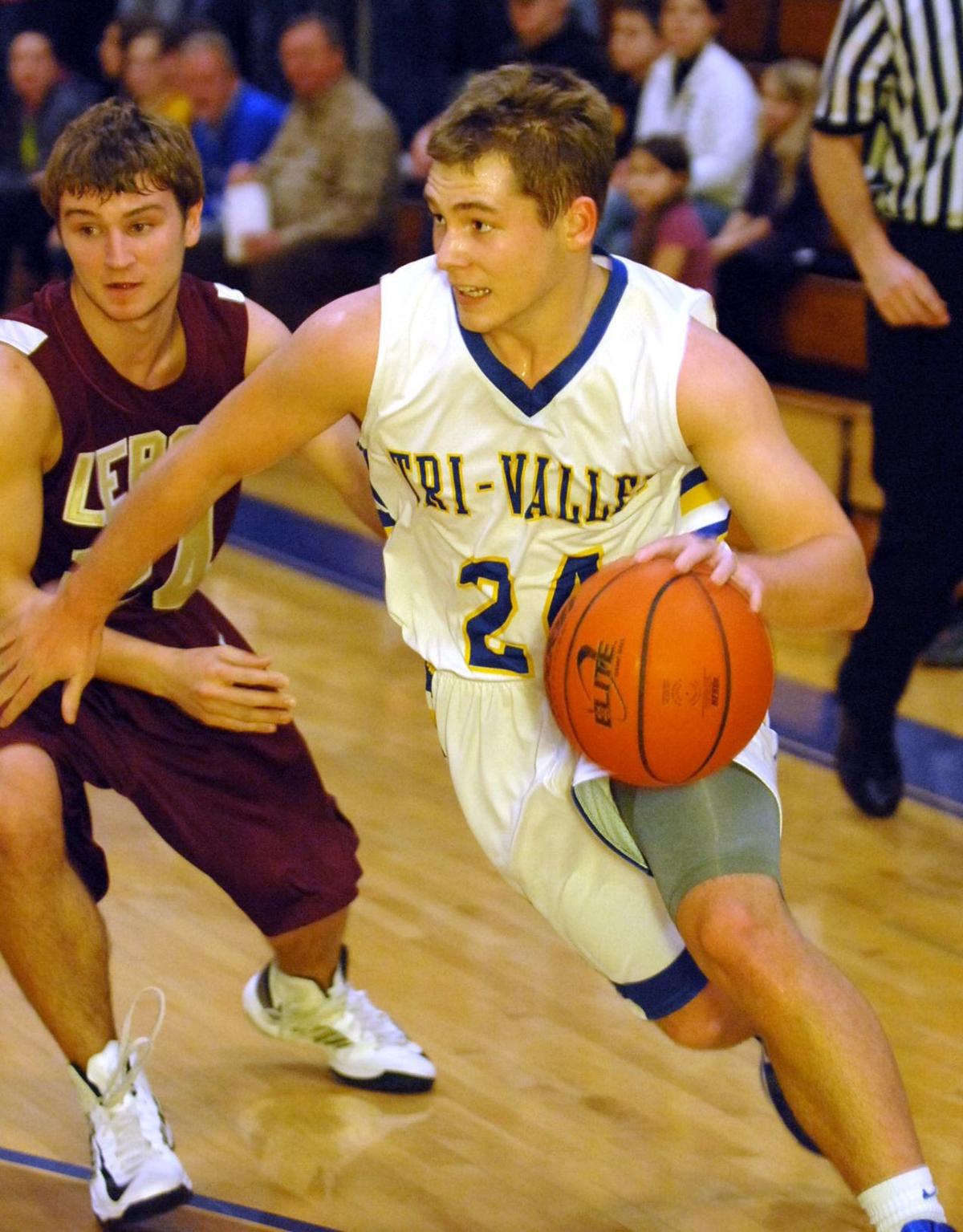 Tri-Valley's Blake Cowden (24) drives the ball around LeRoy's Joe Chastain (24) in the first half of a game in Downs on Jan. 15, 2013. Cowden earned all-state honors in football and basketball.

Travis Goveia shared the title of team captain with Blake Cowden in football and basketball. In theory, the Tri-Valley High School classmates were on equal footing in terms of leadership.

Yet, Goveia never kidded himself. He recognized true leadership when he saw it. Time and again, he saw — and heard — it from Cowden.

This is where it gets hard. More than ever, Goveia could use Cowden's voice in his ear right now, telling him things are OK. In truth, they will never be the same.

Cowden, 24, died unexpectedly last week. The friend Goveia played alongside, graduated with in 2013, worshiped next to in church on Sundays, is gone.

Cowden was special, and not just because he earned all-state honors in two sports, or was the 2013 Pantagraph Male Athlete of the Year.

He was a mix of fun and focus, a born leader who never shied from that responsibility.

As a sophomore, he was starting at quarterback in football and point guard in basketball. Coaches, teammates and fans expected a lot, leaned on him.

He delivered, but not just on game day.

"When it came to team meetings and that dynamic, he was the glue that made everybody have fun," said Jimmy Roach, a 2012 Tri-Valley grad. "There was a certain silliness about him. But yet, he was that guy who would say, 'You know what, it's time to go.' He would just take over."

Roach referred to it as flipping a switch, saying Cowden could quickly go from outgoing and fun-loving to the fiercest competitor you could know.

He repeatedly saw Cowden raise the bar for himself and lift his teammates up with him.

"When he stepped on (the field or court), you knew he was for real and he was legit," Roach said. "You couldn't question the things he would say because you knew he had a reason for it. He just had that switch and you let him do his thing."

Cowden never professed to do it alone. He was quick to praise his teammates and, in Goveia's words, was "a man of God."

His faith was such he wrote words he had heard from his grandmother, Leona Early, on his cleats and basketball shoes: "You can do all things through Christ. He gives you strength."

"A lot of his teammates I've talked to said they would not have come to know God if it wasn't for Blake," said Jon Nelson, Cowden's basketball coach at Tri-Valley.

"Josh (football coach Josh Roop) and I talked about how there's only a few kids you come across who have that 'it' factor that can't be taught. Blake had that. He had that factor you can't really explain, but you know he's got it."

Roop is certain State Farm Insurance recognized it. Cowden had recently been awarded his own State Farm agency in Washington (Ill.) beginning in May 2020. He was excited about that, eager to begin his next chapter.

Cowden's personality was infectious, his passion contagious. He had a unique ability to "bring people up around him and make them better," Roop said.

That included his coaches.

"He was the first player I had who would come off (the field) and we could ... let's say constructively criticize ... each other," Roop said. "That was allowed out of the respect we had for each other. I knew that we were on the same page and we both were out for the same cause."

Cowden led Tri-Valley to its first-ever football playoff victory in 2012. The next year, the Vikings took second in the state. In 2015, they won the Class 2A state title.

"He was the start of that," Roop said.

That's why this hurts so much. Cowden was poised to win in life. The work ethic, passion and leadership that made him a great athlete were a perfect fit in business.

Gabe Cripe saw those qualities when Cowden was a freshman new to the Tri-Valley district. His quirky sense of humor meshed immediately with his new teammates. And Cripe, starting senior quarterback at the time, knew the next year "it would be his (Cowden's) team in football and basketball."

"He had a personality you wanted to be around," Cripe said. "We had a good relationship outside of sports. We stayed in contact after I graduated."

"The guys I've talked to, the overwhelming sense is that it doesn't feel real," Cripe said.

A straight shooter, Cowden would tell them it is. Then he would say to smile, take a deep breath, relax. And that life is something you want to cherish.

Pantagraph Male Athletes of the Year

Pantagraph Male Athletes of the Year

Jim Elliott had a unique perspective on the athletic successes of his celebrated brothers and Bloomington natives, Chalmers "Bump" Elliott and…

The District 87 school board approved a tax levy Wednesday night and also adopted an eLearning program as an alternative to emergency days, such as “snow days.”

The Olympia girls basketball program is off to a 15-3 start this season and on Tuesday received votes in the Associated Press Class 2A state poll.

Tri-Valley's Blake Cowden (8) is pursued by Annawan-Wethersfield defenders in first half action in Downs on Nov. 3, 2012. Cowden, the 2013 Pantagraph Male Athlete of the Year, died last week at age 24.

Tri-Valley's Blake Cowden (24) drives the ball around LeRoy's Joe Chastain (24) in the first half of a game in Downs on Jan. 15, 2013. Cowden earned all-state honors in football and basketball.