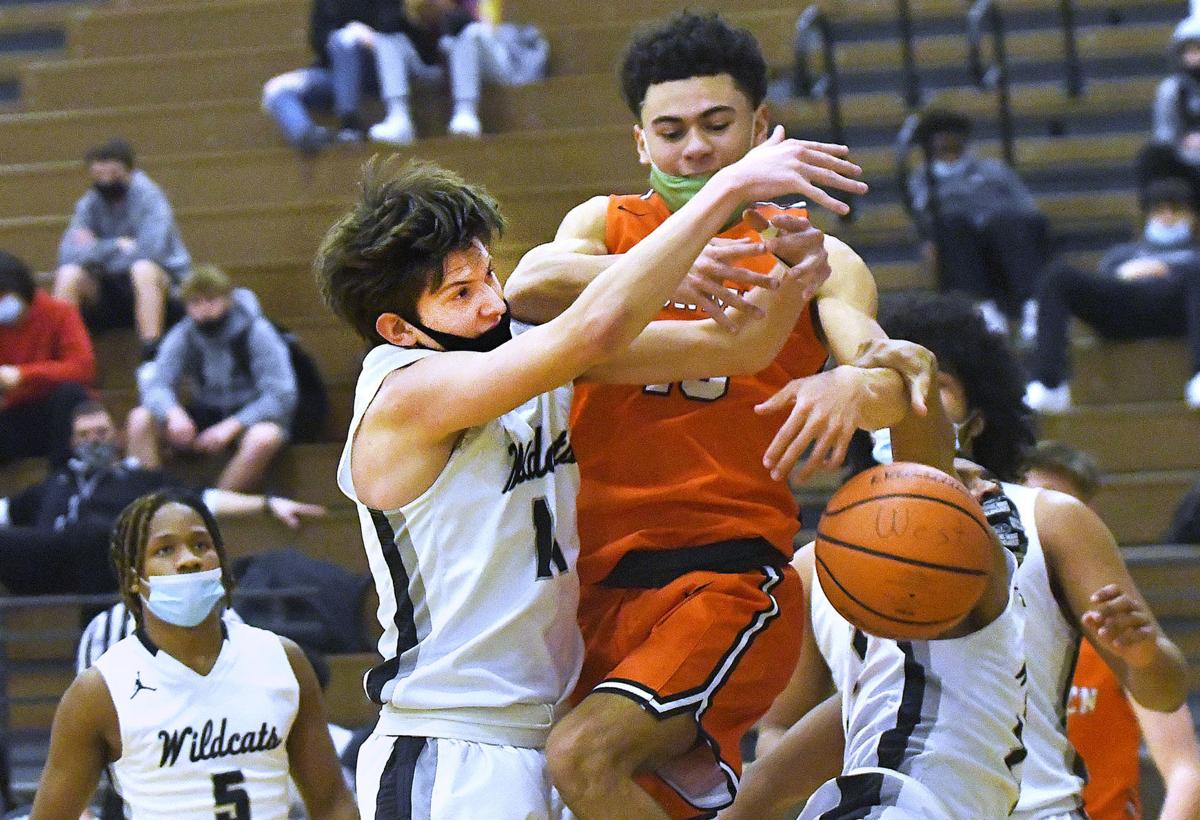 Normal West guard Nick Rediger (11) tangles with Normal Community guard Trey Redd (10) as Redd attempts to drive on the basket during the first half at Normal West, Friday, Feb. 19, 2021. 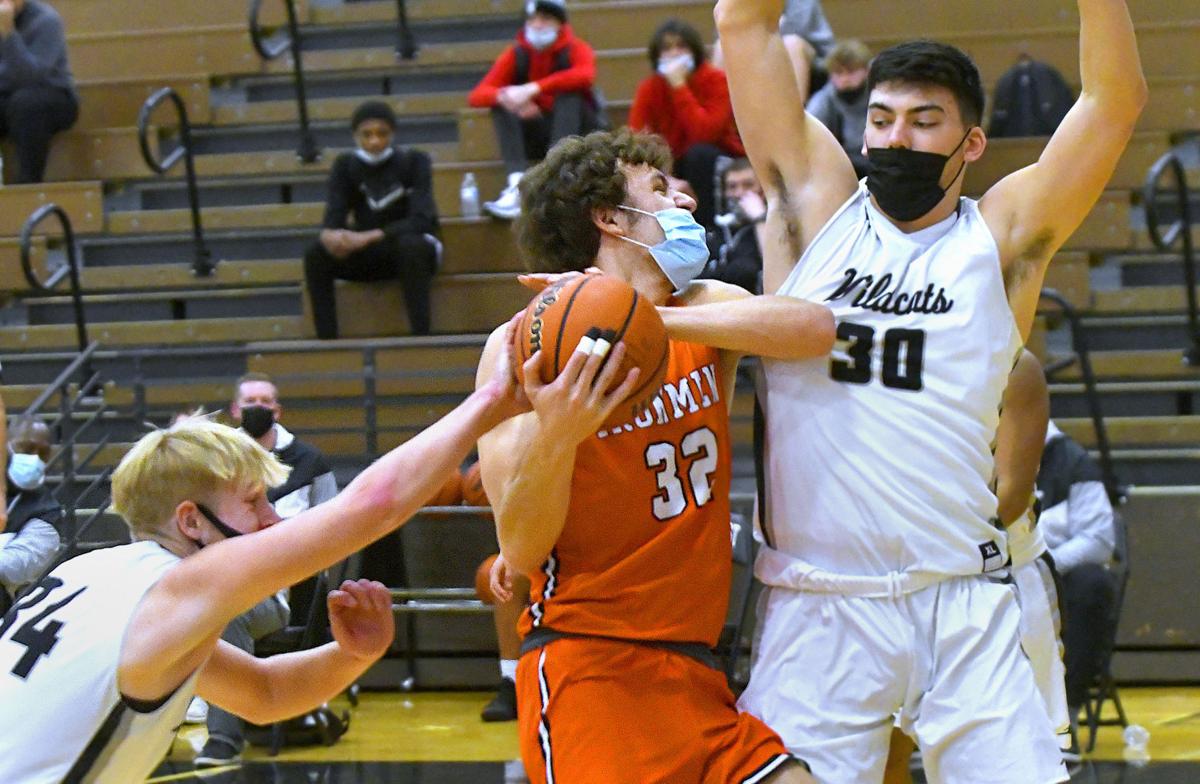 Normal West guard Colton Cassady (34) gets a handle on the ball as Normal Community forward Zachary Cleveland (32) drives to the basket against Normal West forward Max Ziebarth (30) during first half action at Normal West, Friday, Feb. 19, 2021.

However, NCHS coach Dave Witzig mentioned it after hearing some of the favorite memories from Normal West's seniors were of the Wildcats' 62-47 Class 4A Pekin Sectional semifinal victory against NCHS last March during a Senior Night ceremony before Friday's game between the Unit 5 rivals.

Trey Redd steal and layup to end first half gives Normal Community a 24-16 lead over Normal West at the intermission pic.twitter.com/eCTZsmFCYe

Redd scored 11 points and gave NCHS a huge momentum boost at halftime as the Ironmen downed West, 52-40, in a Big 12 Conference game.

"It's really good coming back from our loss at Pekin. That really hurt," said Redd, a junior guard. "Coach mentioned something and that just got the guys going. Coming out and winning on their home court on Senior Night was pretty cool."

Junior forward Zach Cleveland added 10 points and five rebounds as NCHS improved to 4-4 overall and 2-3 in the Big 12.

"We've been in so many close games," said Witzig, as the Ironmen's four losses are by a combined 11 points. "West did a great job making a comeback and putting pressure on us. We were trying to work on holding the ball a little bit, and West did a good job of pressuring us and making us work hard to the buzzer. That's what you expect in a game like this."

Corey Walker and Max Ziebarth tried to rally West (1-5, 1-4) from a 17-point deficit in the second half. Walker finished with 13 points and 11 rebounds, while Ziebarth scored 14 points.

Redd's steal and layup with five seconds left in the first half gave NCHS a 24-16 halftime lead. It also started an 11-0 run that put the Ironmen ahead, 33-16, midway through the third quarter.

"I ended up missing the shot before and came back and got the steal," said Redd. "Our bench just gave us energy and that led into the second half."

Walker, a Western Michigan football signee, used his strength for two three-point plays that got West going. The Wildcats cut the deficit to 37-25 after three quarters.

When West junior Jonathan Edmonson II sank a 3-pointer from the corner, NCHS' lead was down to 41-33 with 4:56 left.

"That's something we've seen from our players this year. They don't give up," said West coach Ed Hafermann. "We've had that happen in a couple games where we could have said, you know what, we're going to call it quits and instead of losing by eight or nine we're going to lose by 17 to 20."

Cleveland's reverse layup and two Redd free throws quieted the West comeback hopes. The Wildcats only got within nine the rest of the way.

"Tyler Dwinal set the tone for our team tonight. He dove for the first loose ball and got it for us," said Witzig of the 6-foot-5 junior center. "I thought our guys did a good job of doing the dirty work because in these games every basket matters. We were able to keep those two guys (Walker and Ziebarth) away from the basket enough and luckily they weren't making their 3s."

Dwinal helped bottle up Walker in the first half as the 6-7 senior missed five shots, scored one point and grabbed three rebounds. But Walker bulled his way inside after halftime.

"I thought Dwinal did a really good job using his strengths, which is strength," said Hafermann, whose team didn't get to play for last year's sectional title after the pandemic stopped the season. "He's a very strong kid. He did a great job defending and guarding our bigs and also did a great job rebounding.

"Corey has got a motor on him as well. He's very competitive, too. You could see it going into the fourth quarter, but he kept playing and kept getting rebounds. He had a couple and-ones for us which got our scoring going as well."

NCHS shot 41.8% from the field and made a season-high five 3-pointers while sinking 7 of 9 free throws. The Wildcats made only 29.2% from the field, but were 11 of 14 at the line. West grabbed a 35-26 rebounding advantage, but committed 18 turnovers.

Both teams are in action for Big 12 games Saturday. NCHS entertains Danville, while West travels to face Champaign Centennial.

A reserve the first half of the season, Nick Rediger scored a career-high 18 points to lead Normal West into the Class 4A Sweet Sixteen with a 62-47 win over Normal Community in a Pekin Sectional semifinal on Tuesday.

High school basketball players and coaches would rather wear masks than be sitting at home not playing games like they were for almost three months.

Normal West guard Nick Rediger (11) tangles with Normal Community guard Trey Redd (10) as Redd attempts to drive on the basket during the first half at Normal West, Friday, Feb. 19, 2021.

Normal West guard Colton Cassady (34) gets a handle on the ball as Normal Community forward Zachary Cleveland (32) drives to the basket against Normal West forward Max Ziebarth (30) during first half action at Normal West, Friday, Feb. 19, 2021.