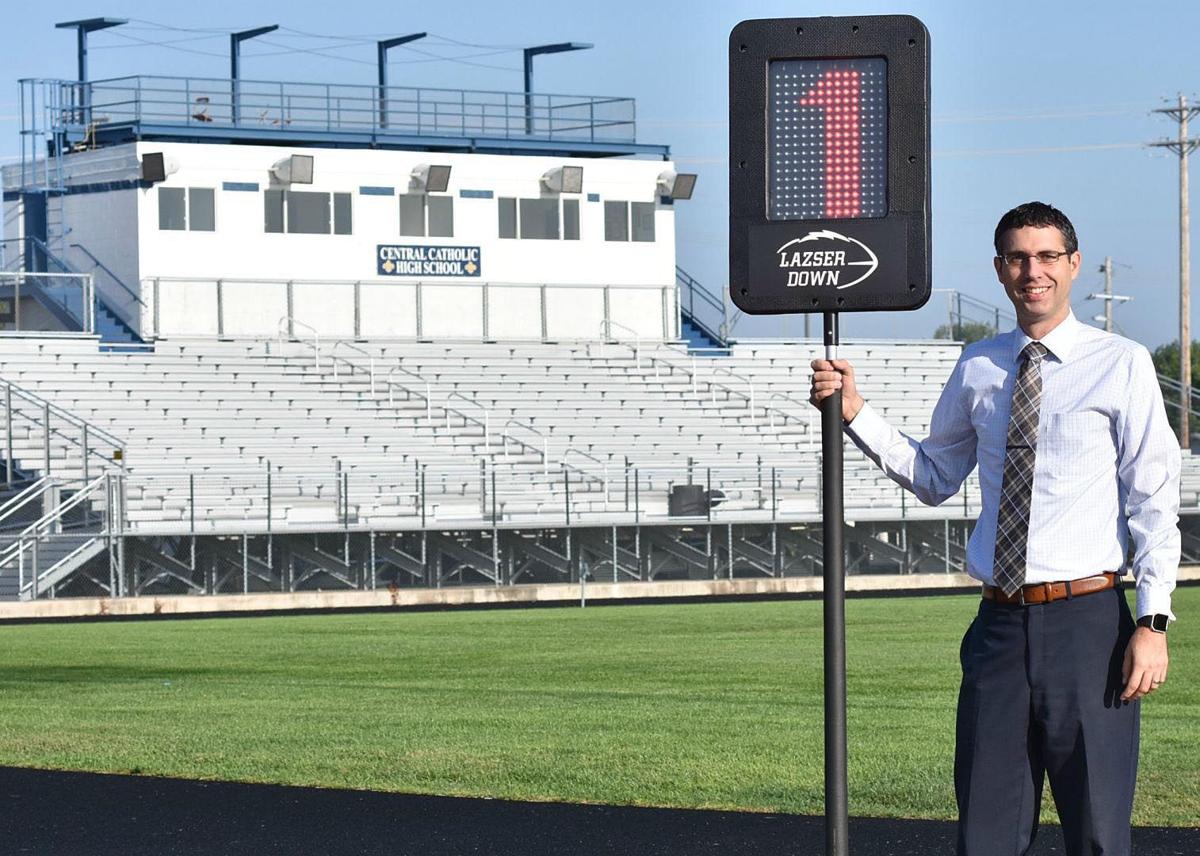 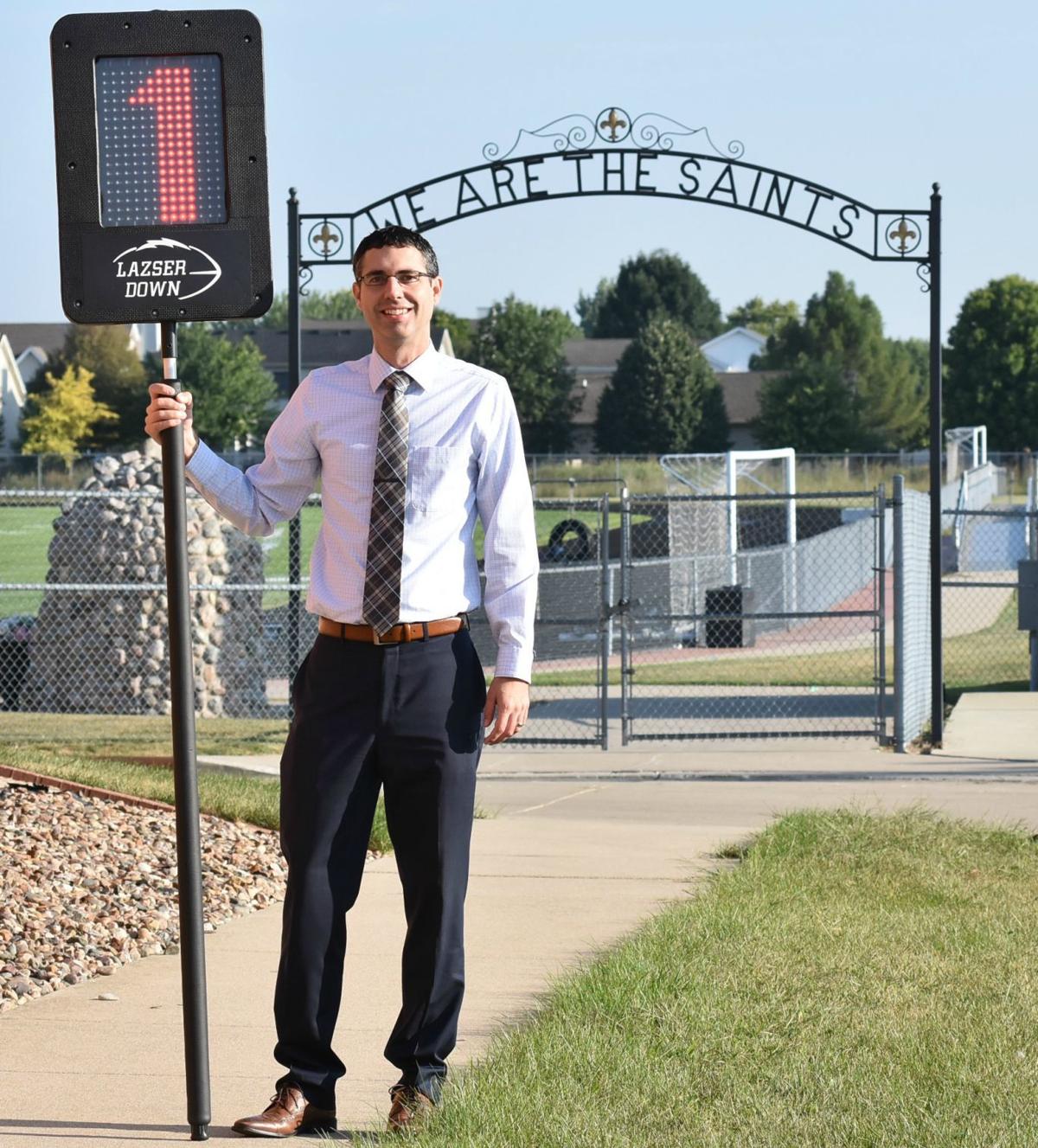 BLOOMINGTON — Trivia buffs should brace themselves.

Someday they may be asked where the high tech down markers used at all football games made their national debut in a regular-season high school contest.

The answer will be Friday's 7 p.m. battle between Pontiac and Central Catholic at the Saints' Bill Hundman Memorial Field where a Lazser Down prototype will be used.

Mike Foster, the father of Central Catholic principal Sean Foster, has been developing the system for 11 years and hopes to offer the patented invention for sale next January.

Mike Foster, who coached for 30 years, was often frustrated with how long it took to get accurate distances for a first down, a key factor in play calling.

Lazser Down markers communicate with each other via radio waves to calculate the distance to a first down automatically. Even the fastest no-huddle offense can't outpace the Lazser Down system.

A 64-year-old Kansas City resident, Foster has had about a dozen prototypes made over the years. Last season, Tulane used the system at home games. This year, Nebraska and Notre Dame used it for their spring games.

Foster's dream is to have Lazser Down at every game including those in the NFL.

"The Chiefs, Cowboys and Saints have seen it," he said. "The NFL has (shown interest), but they are slow to change."

Sean Foster says it's exciting to see his father's hard work near fruition.

"I remember the first time he told me about the idea," the younger Foster said. "He was up in the press box. I think he was a defensive coordinator at the time and needed to call the play. He wasn't sure if it was third-and-a-yard or third-and-a-foot. He was always frustrated with that.

"We're really proud to be able to say we're the first high school to be able to use it. I'm optimistic that we're going to see it quite a bit in the future."

The Saints will only have one Lazser Down marker on Friday, but they hope to receive a second later in the season that will indicate the distance to a first down.

The NFL and most colleges use Dial-a-Down brand markers, which were invented by Jim Egender, a member of Lazser Down's advisory team. Egender's patent expired so he is not in competition with Laszer Down.

"He was very instrumental in helping me get this off the ground," said Mike Foster, who is not ready to announce the retail price for his invention.

Sean Foster credits his father's persistence for getting Laszer Down this far.

"He has a lot of grit," said the son. "I think most people would have given up a long time ago."

Mike Foster and his investors have combined to pour more than $500,000 into the invention so far. He hopes to sell his company after it's established in four or five years.

"There is still a laser component to it," Mike Foster said. "When you take the chains out to do a measurement, we have a laser down on the bottom of it."

Players colliding with the markers on the sideline will find them safer than current markers because they are lighter (at 5.4 pounds instead of 10) and 60 percent of the surface area is covered with protective foam.

Numbers are displayed at 13-inch heights and three-inch widths. The markers' housings are the same polycarbonate used in NFL helmets.

"So it's real thin, but it won't break or splinter," said Mike Foster, noting the poles are aluminum. "Everything we did was built to NFL specifications."

Watch now: Thomas Graham Jr. gets past the fall

Watch now: Thomas Graham Jr. gets past the fall

Ten Hochman: May the Fourth be with you!

Ten Hochman: May the Fourth be with you!

Add another senior memory for Olympia's Ethan Davis. He rushed for a school-record 371 yards in the season finale after scoring a school-best 42 points in basketball.

Here are the 2021 final rankings of Illinois high school football teams in each class, according to an Associated Press panel of sportswriters:

Check out scores from Week 6 games around Central Illinois. We'll update all of them until they're finals.

There was no stopping Prairie Central as the Hawks scored early and often in routing Central Catholic, 55-13.

While it wasn't a state championship, Prairie Central ended its football season with a bang in downing Central Catholic.

Check out all the scores from Week 5 games around Central Illinois. We'll update all of them until they're finals.

Here are the latest rankings of Illinois high school football teams in each class, according to an Associated Press panel of sportswriters:

Normal West will not play a first round game in the Big 12 Conference Tournament.